In a recent article published in AJKD, Muriithi et al report a large series of 133 patients who had biopsy-proven acute interstitial nephritis at a single center. The following questions will test your pathology knowledge on this topic. 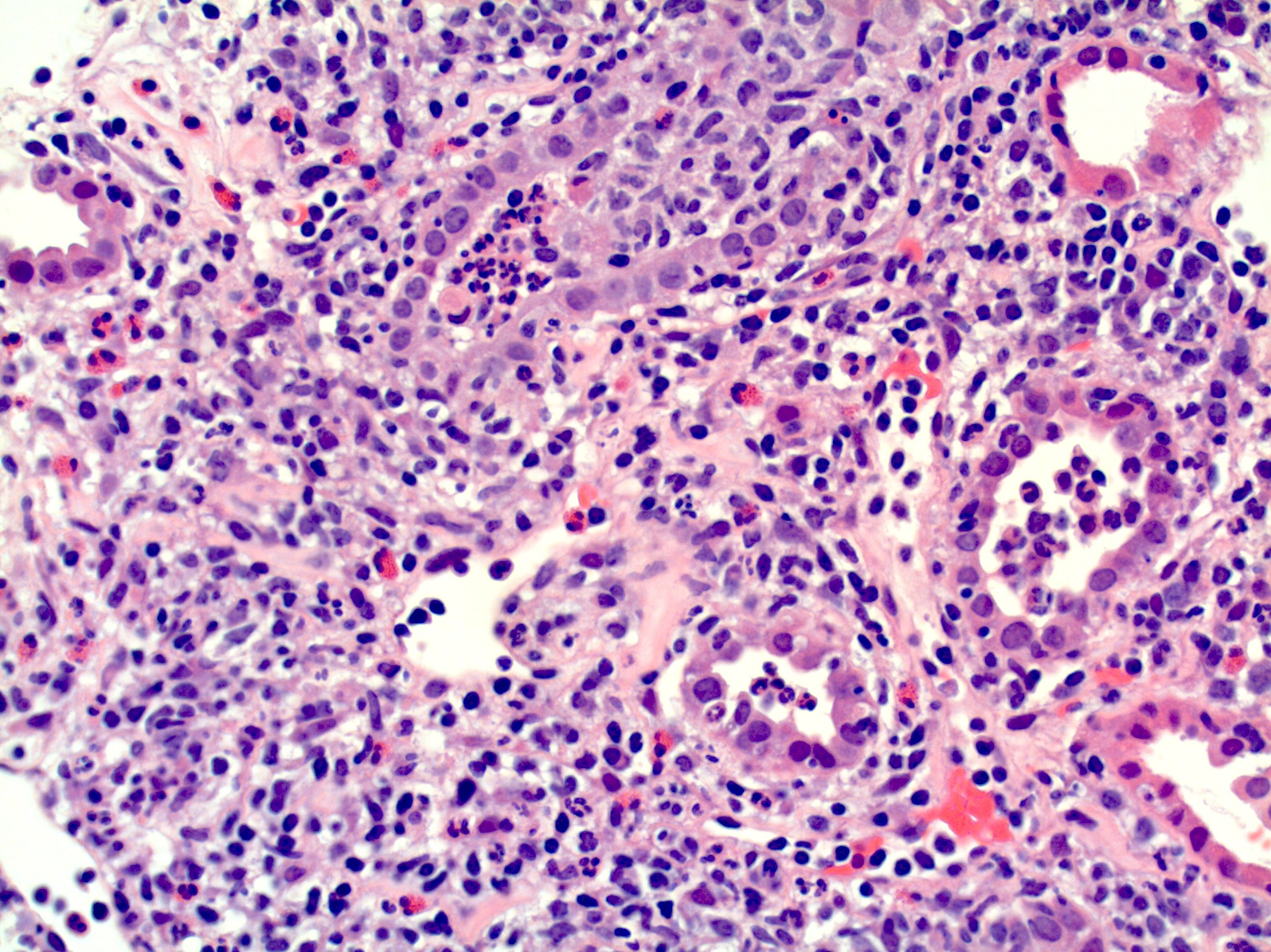 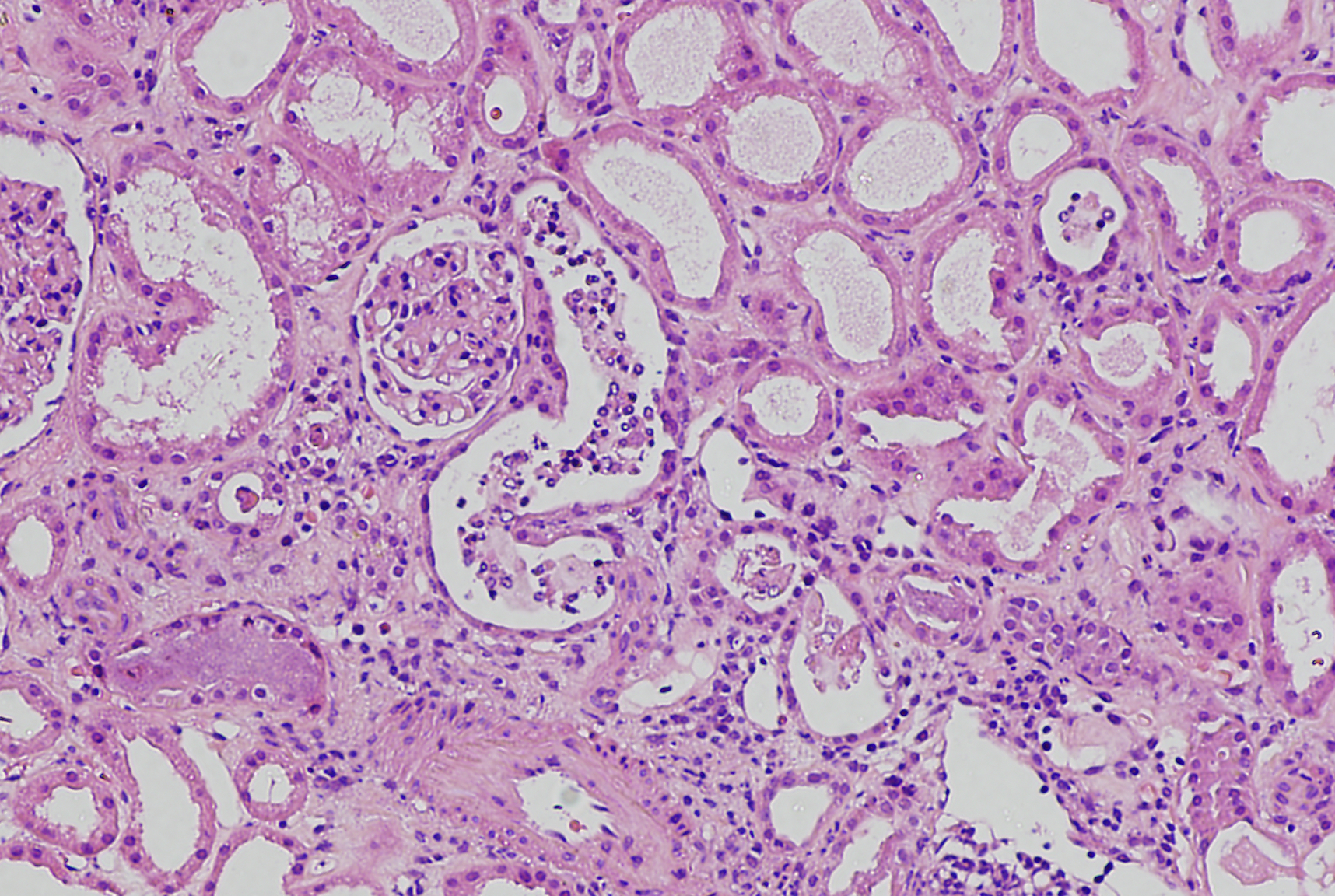 A 63-year-old nondiabetic man developed an ischemic-appearing gangrenous toe on his foot. Because the lesions appeared infected, he was started on vancomycin and trough levels rose quickly above 50. He remained hemodynamically stable and his blood cultures were negative. His serum creatinine rose from 0.9 mg/dL (eGFR, 91 mL/min) to 2.7 mg/dL (eGFR, 24 mL/min). All his serologies were negative. Urinalysis showed no proteinuria or hematuria, but sediment evaluation revealed occasional granular casts and white blood cells. A kidney biopsy was performed (image above). The most likely diagnosis is:
ATN secondary to sepsis
Incorrect.
Acute tubular necrosis (ATN) and mild interstitial nephritis, probably secondary to vancomycin nephrotoxicity
Correct! The most likely explanation for the ATN and mild acute interstitial nephritis is high vancomycin levels. Vancomycin can be nephrotoxic, particularly in patients who have underlying chronic kidney disease. However, this patient who did not have pre-existing chronic kidney disease still developed ATN with mild interstitial nephritis. The constellation of ATN with mild interstitial nephritis is common in patients with vancomycin nephrotoxicity. The diagnosis can be difficult because many times these patients are on a number of medications and also have numerous co-morbidities. However, after stopping vancomycin, this patient’s kidney function slowly started to normalize. The patient was not septic and had no risk factors for cholesterol embolization (he had gangrenous appearing toes but no livedo reticularis or any intervention that can lead to cholesterol emboli). He had peripheral vascular disease but remained hemodynamically stable.
ATN secondary to ischemia/peripheral vascular disease
Incorrect.
ATN secondary to cholesterol embolization
Incorrect. 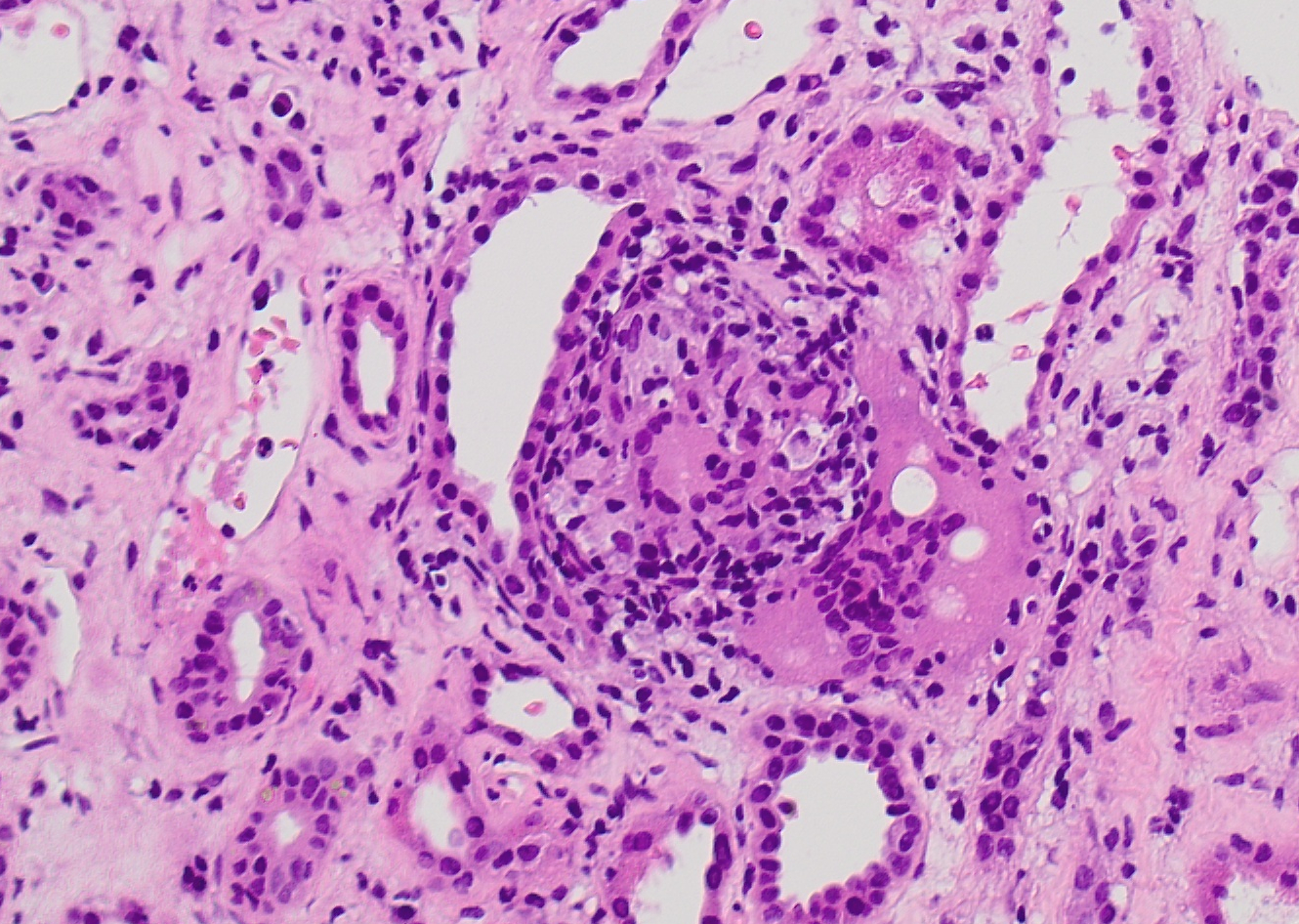 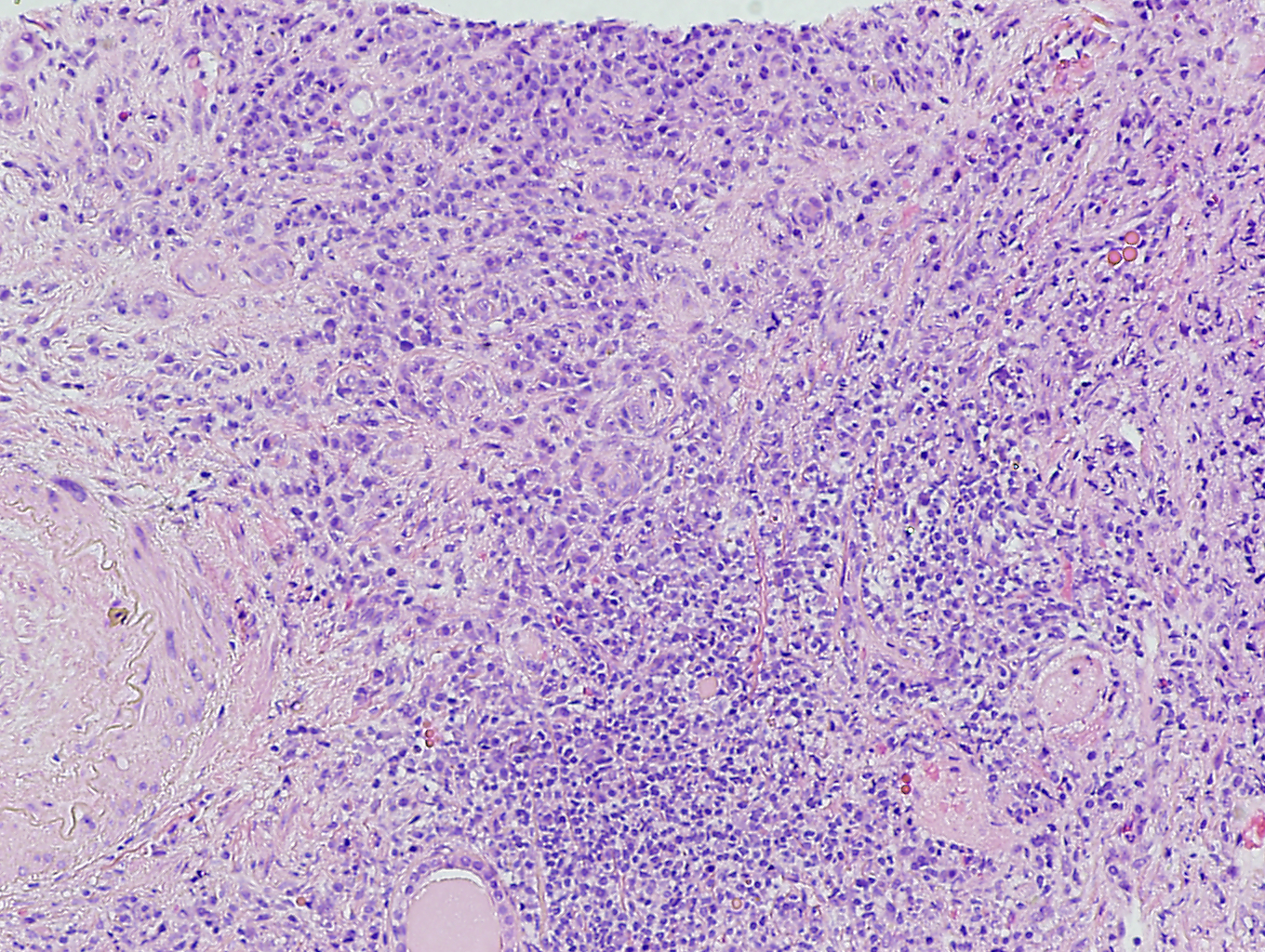 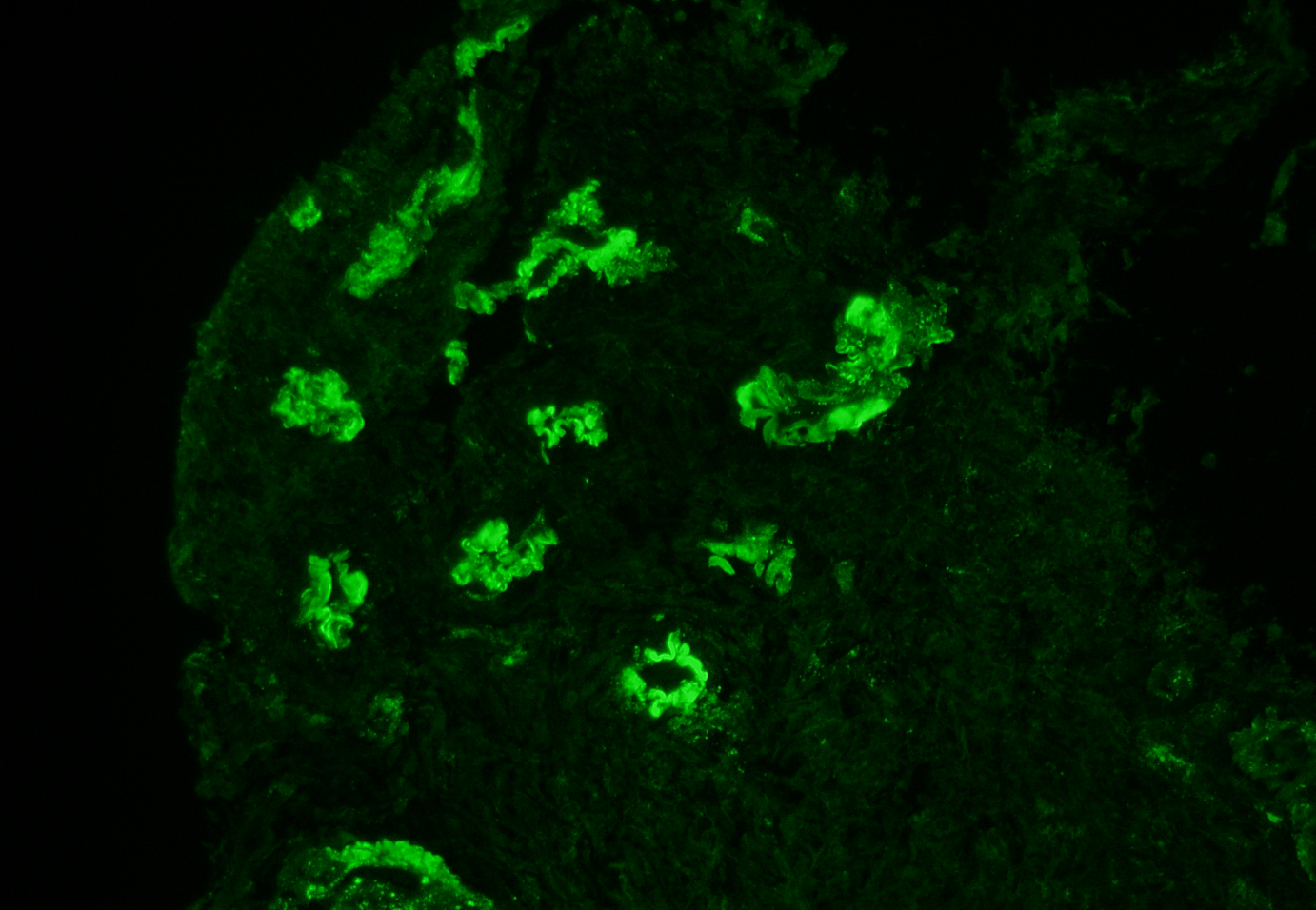 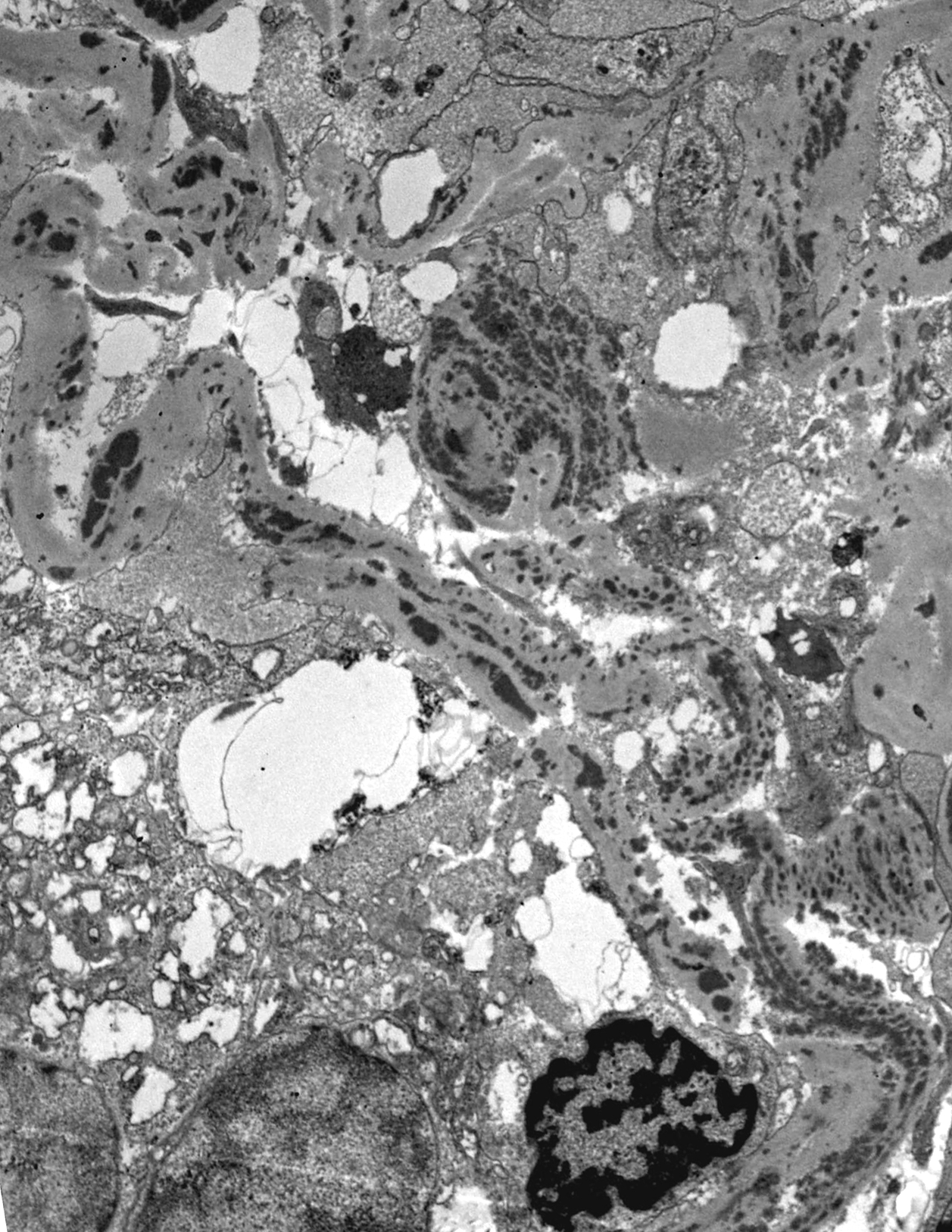 An 83-year-old man with a history of type II diabetes and chronic kidney disease was found to have progressive worsening of his kidney function; his serum creatinine rose from 2.1 mg/dL (eGFR, 28 mL/min) to 6.3 mg/dL (eGFR, 7 mL/min) in an eight-month period. Urine protein/creatinine ratios ranged from 0.6 to 0.8. Urinalysis shows 1+ protein and trace blood. ANA was positive at 1:640, ANCA was negative, C3 and C4 low at 71 and 9, respectively, and SPEP and UPEP negative for monoclonal spike. A kidney biopsy was performed with the images showing representative light microscopy, immunofluorescence (IgG), and electron microscopy (a tubule) images. The most likely diagnosis is:
IgG4-related interstitial nephritis
Correct! This patient has IgG4-related interstitial nephritis. The renal parenchyma is involved by a heavy plasma-cell-rich interstitial inflammatory cell infiltrates associated with variable degree of fibrosis. Large numbers of the plasma cells (over 50 plasma cells/HPF) were IgG4 positive by immunoperoxidase stain. IgG-containing tubular basement membrane deposits were abundant by immunofluorescence, and electron microscopy confirmed the presence of electron dense immune type deposits in the tubular basement membranes. IgG4-related interstitial nephritis frequently has a zonal distribution forming bulky tumor-like masses in the kidney. Fortunately, the disease is usually steroid responsive. In lupus nephritis, IgG-containing deposits along the tubular basement membranes are not unusual; however, the interstitial plasma cells are not IgG4 dominant. Also, such bulky plasma-cell-rich interstitial inflammatory cell infiltrates are unusual in lupus nephritis. Drug-induced interstitial nephritis rarely has so many plasma cells, and tubular basement membrane deposits are absent. Although there was prominent chronic injury in the biopsy, the active plasma-cell-rich inflammation and the tubular immune complex deposits are not characteristic findings in advanced stage diabetic nephropathy.
Lupus nephritis with prominent interstitial inflammatory cell infiltrate
Incorrect.
Drug-induced interstitial nephritis
Incorrect.
End-stage diabetic nephropathy
Incorrect.