A 70-year-old woman was diagnosed with Sjögren syndrome four years ago. She also has a history of hypertension, which has recently become difficult to control. She presented with shortness of breath and was found to have pericardial effusion and a serum creatinine of 2.0 mg/dL (eGFR, 25 mL/min), elevated from baseline of 1.0 mg/dL (eGFR, 55 ml/min). Urinalysis showed microscopic hematuria with 5-10 RBCs/HPF. Urine protein/creatinine ratio was 2.5 g/g. Laboratory workup revealed an ANA of 1:2560, but dsDNA was negative. Serum C3 was low at 61 mg/dL, and C4 was unmeasurable. Rheumatoid factor was high at 400 IU/mL. ANCA test was negative. Liver function tests were normal. Serum calcium was 7.8 mg/dL. Hepatitis B and C virus serologies were negative. She weighed 170 pounds with a BMI of 30. A kidney biopsy was performed.

What is the most likely diagnosis?
Diffuse proliferative lupus nephritis with lupus vasculitis.
Incorrect Diagnosis: Although the patient had high ANA titers, the absence of widespread glomerular immune complex deposition, the undetectable serum C4 with only mildly decreased serum C3 levels, and the absence of endothelial tubuloreticular inclusions make proliferative lupus nephritis with lupus vasculitis unlikely.
Cryoglobulinemic glomerulonephritis and vasculitis.
Correct Diagnosis: The paraffin sections for light microscopy contained renal cortex with 19 glomeruli; only one of which was obsolescent. The remaining glomeruli were hypercellular with some lobular accentuation (Image 1). Glomerular necrosis/crescent formation was not seen. Glomerular capillary hyaline thrombi were not present. Sections contained a small interlobular artery with transmural inflammatory cell infiltrate (Image 2). In addition to infiltrating inflammatory cells, deposition of homogeneous eosinophilic material was noted in the vascular wall (Image 3). There was evidence of acute tubular injury as well as some patchy interstitial mononuclear cell infiltrate, which contained predominantly CD3 and CD5-positive T cells admixed with some CD20-positive B cells. The interstitial fibrosis was mild and patchy. Frozen sections cut for immunofluorescence contained four hypercellular glomeruli. The reaction with the antibody to IgG showed scattered positive granules in the mesangium and along the glomerular capillary loops (Image 4). Similar granular, somewhat segmental paramesangial and glomerular capillary staining was noted for IgM (Image 5) as well as kappa and lambda light chains and C3. No glomerular staining was noted for IgA, C1q, fibrinogen, and albumin. Polyclonal cast staining was evident. Scattered interstitial plasma cells stained for IgG and kappa and lambda light chains. One glomerulus was available for electron microscopy. Ultrastructurally, only a few paramesangial, intramembranous, and subepithelial electron-dense deposits were identified (Image 6). On higher magnifications, some of these deposits had a microtubular substructure. The diameter of the microtubules was 24.0 +/- 5.1 nm. In addition, there was widespread mesangial cell interposition along many glomerular capillary loops. Endothelial tubuloreticular inclusions were not seen. The foot process effacement was moderate to prominent (approximately 60-70%). 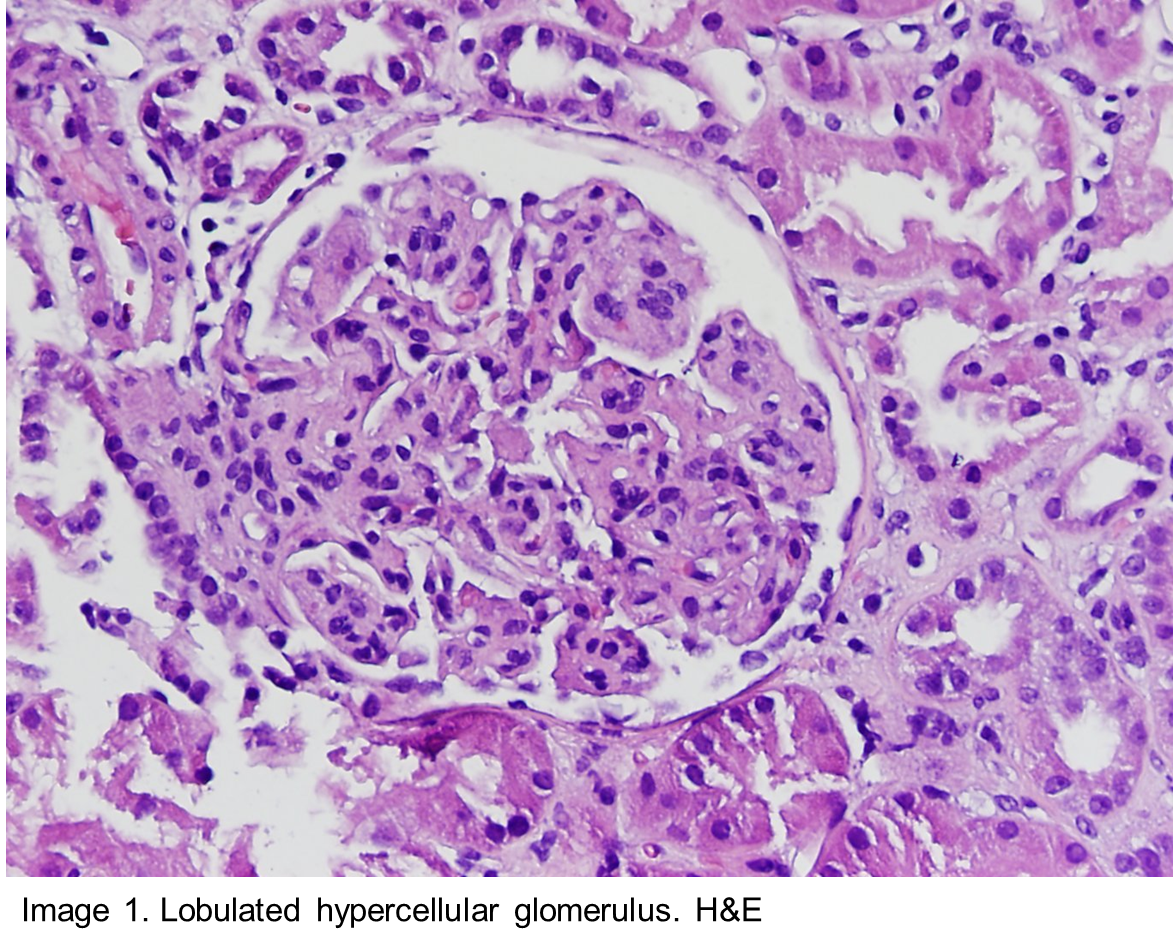 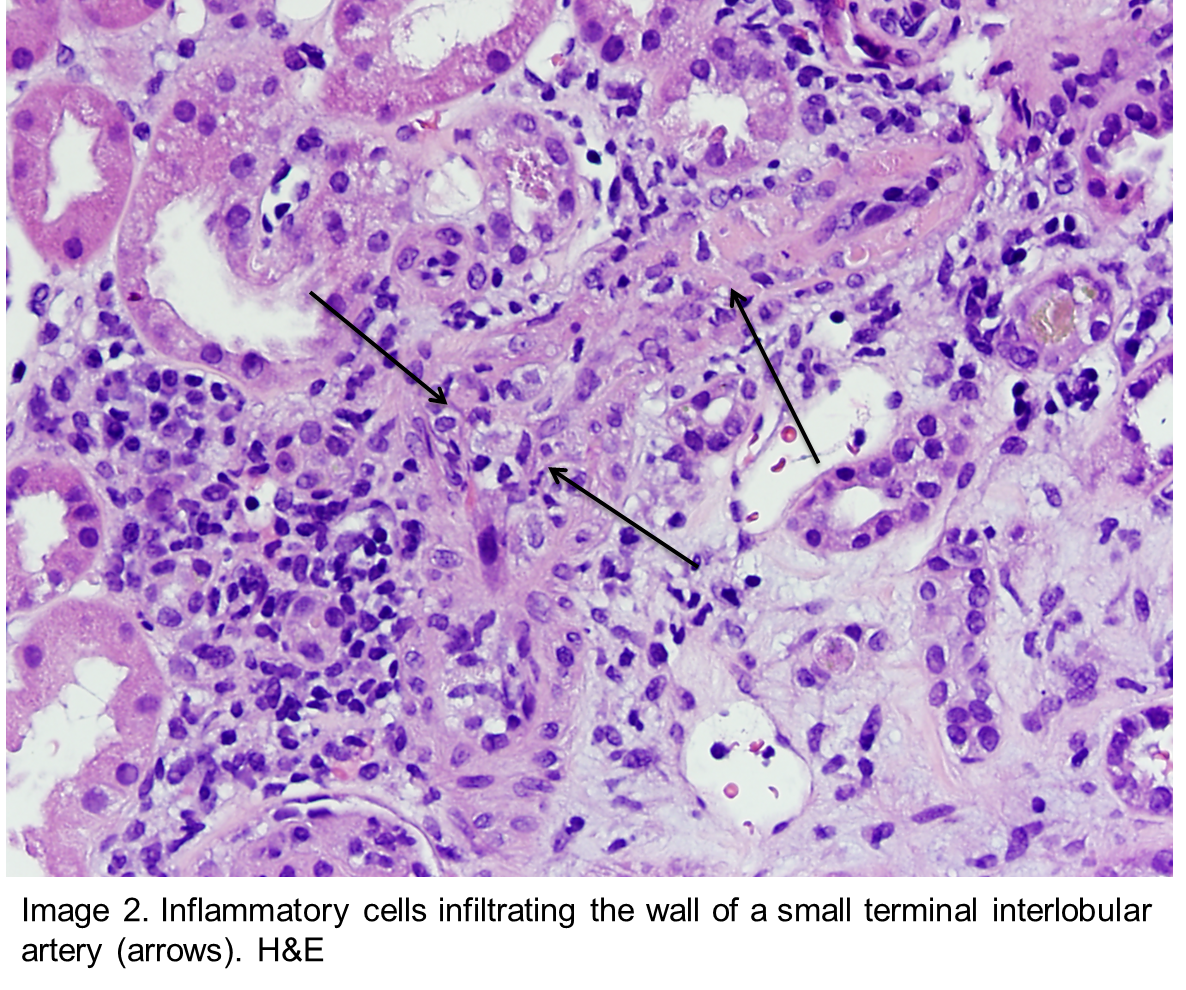 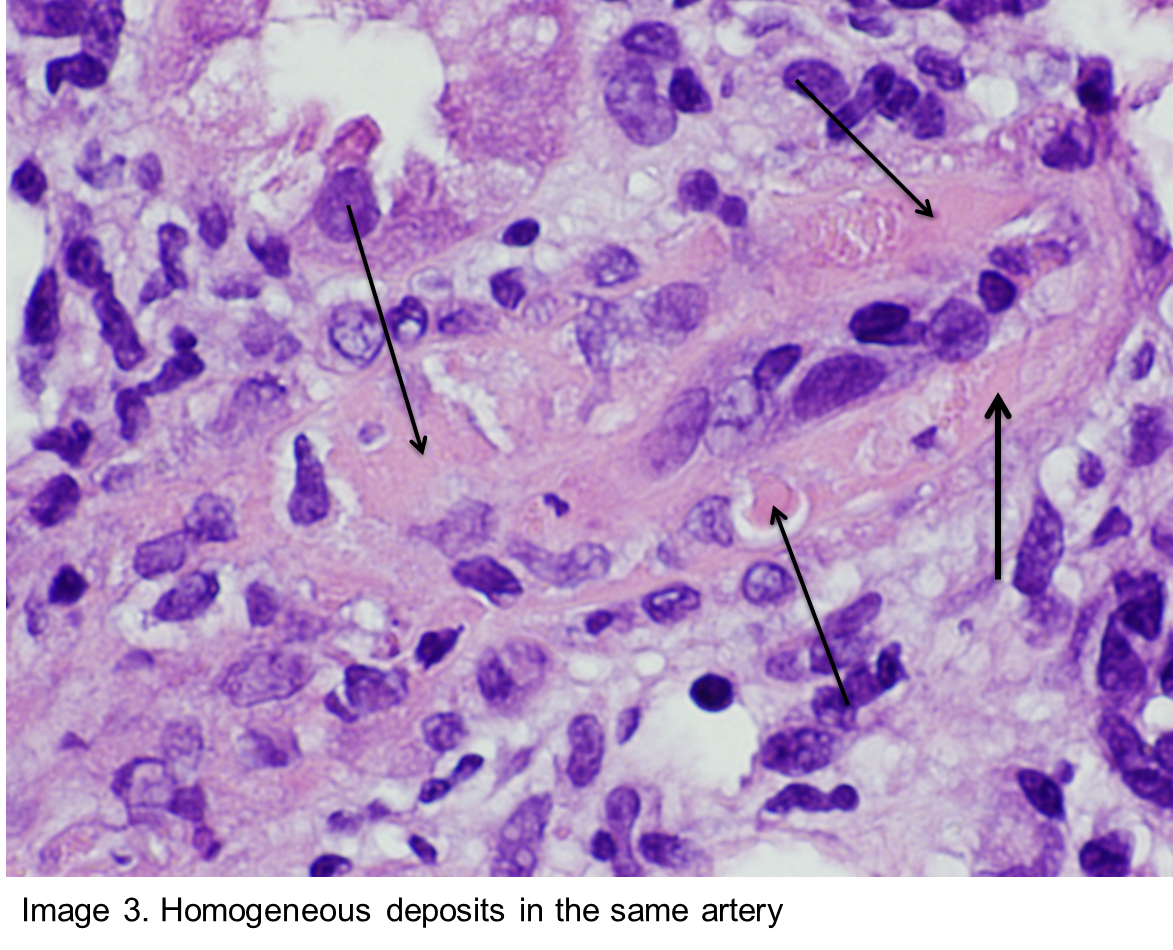 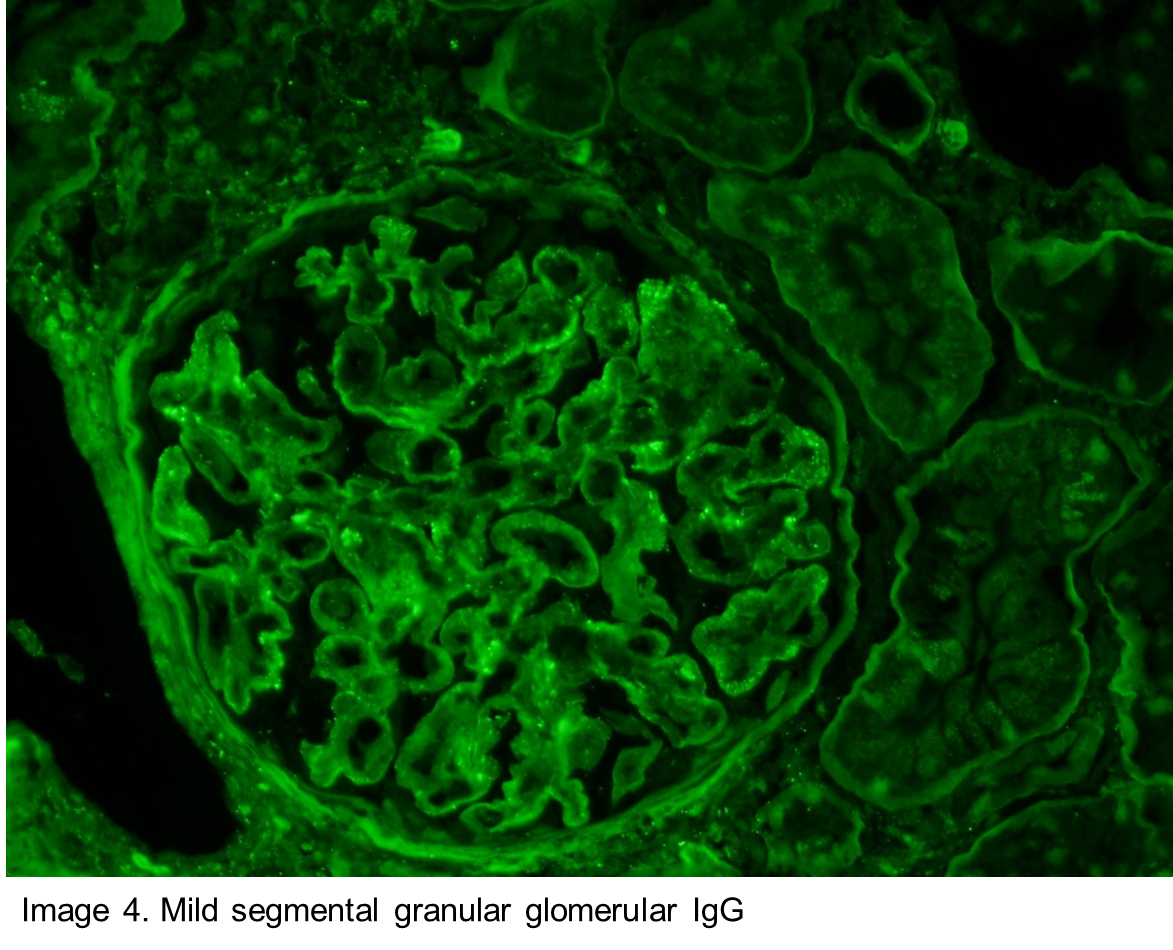 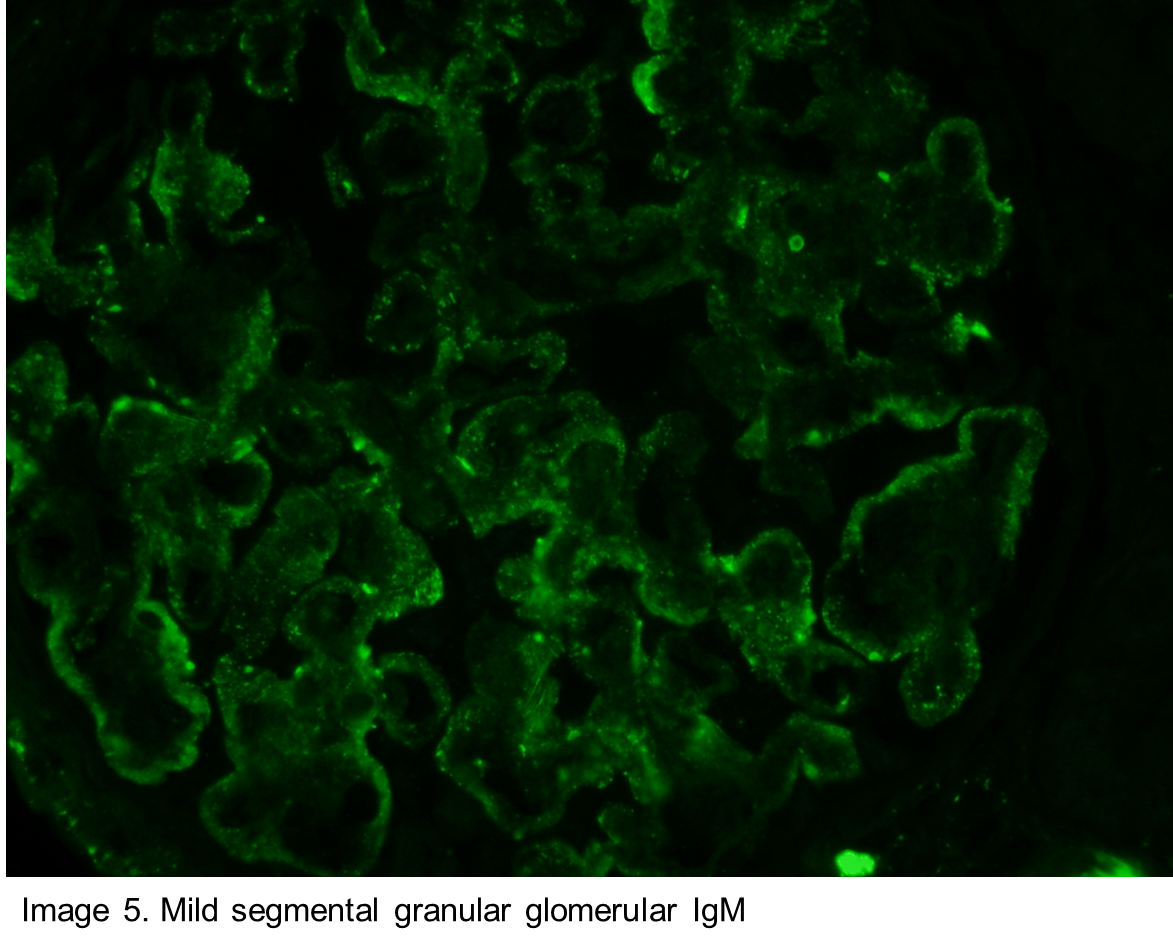 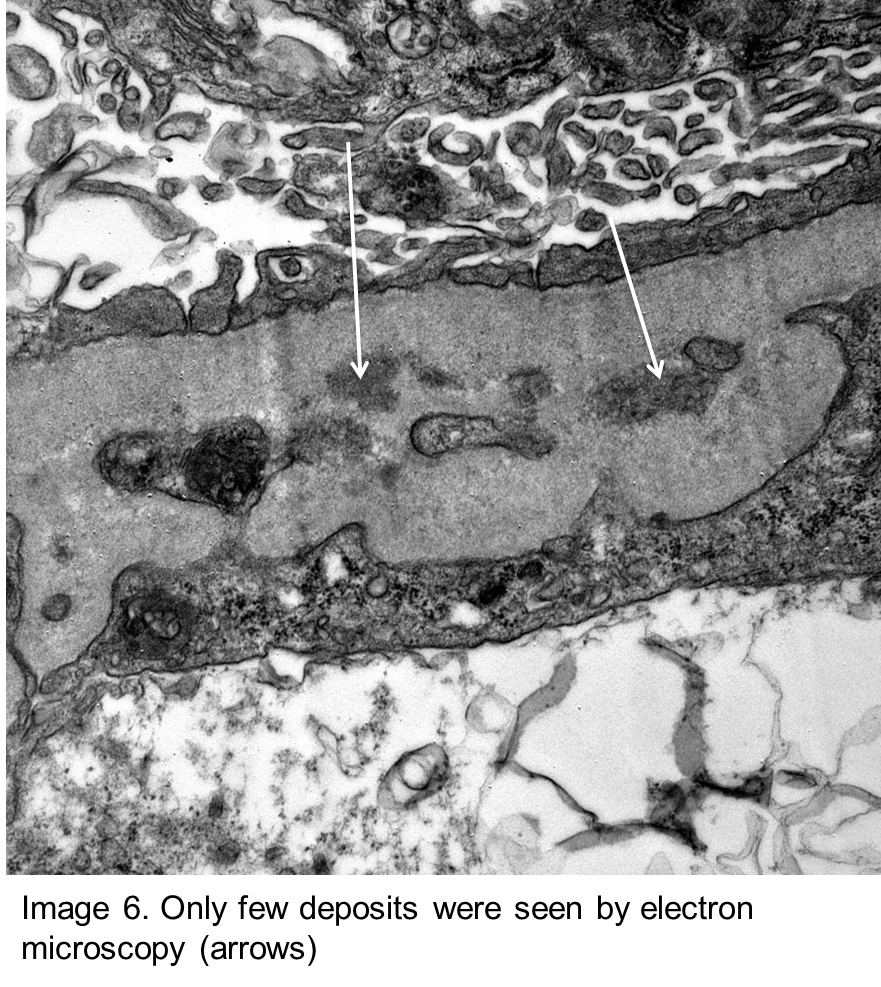 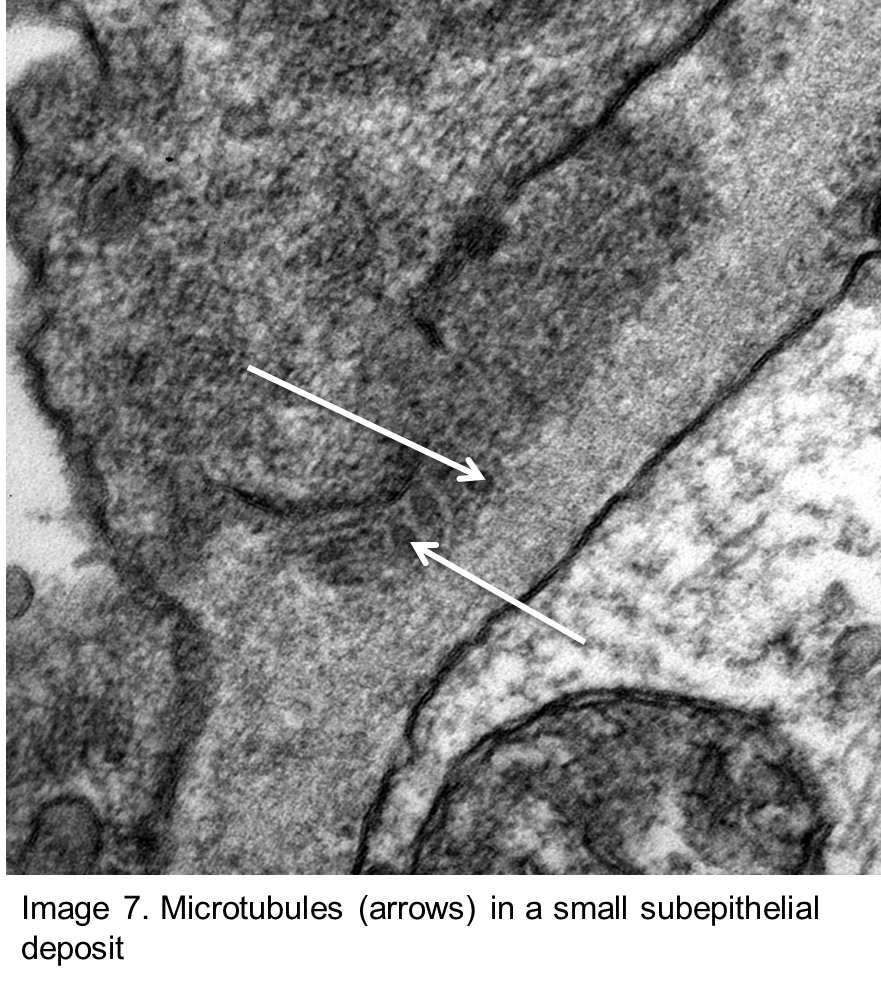 Please visit the Atlas of Renal Pathology II (freely available) at AJKD.org for related installments on this and other topics.