Tenofovir disoproxil fumarate (TDF) is a nucleotide analog reverse transcriptase inhibitor. It is a component of several antiretroviral regimens in the management of HIV (human immunodeficiency virus) as well as a treatment for hepatitis B. It is well recognized to cause adverse effects of the kidney, such as a proximal tubulopathy, proteinuria, and acute and chronic kidney injury. α1-microglobulin (A1M) is normally filtered by the glomerular and reabsorbed by proximal tubular cells, and its appearance in the urine is a marker of proximal tubular dysfunction. A recent AJKD study by Jotwani et al has evaluated the association between HIV infection, TDF exposure, and urine α1m levels in a cohort of men with HIV. 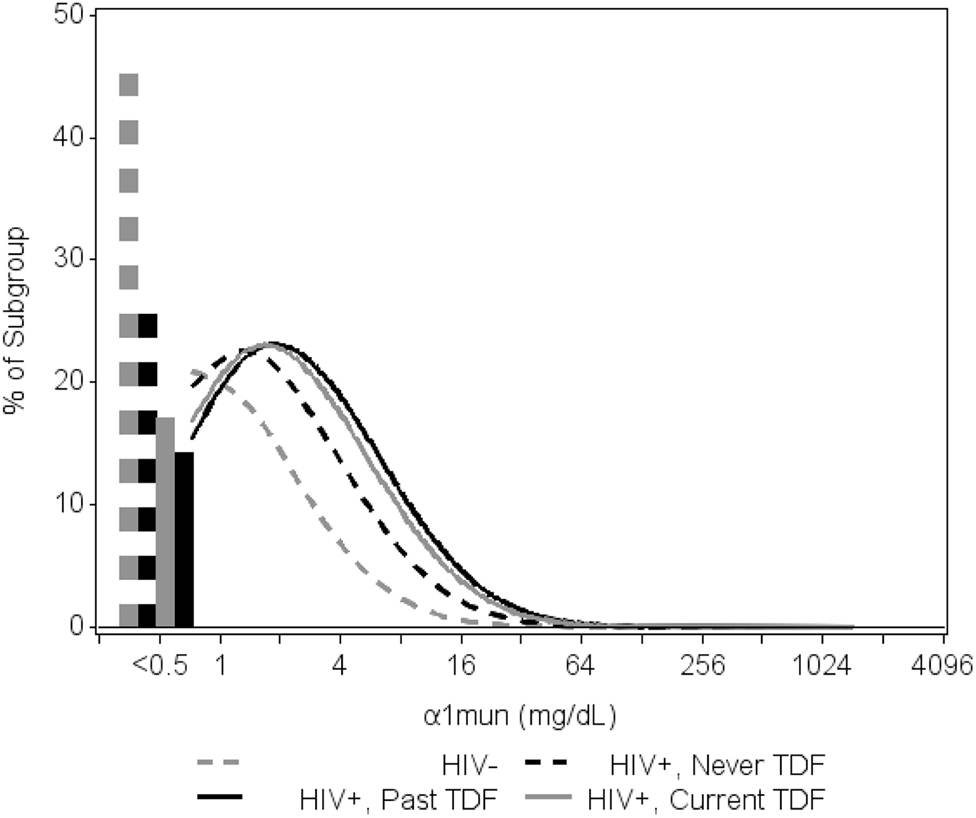 Eight hundred eighty-three HIV-infected and 350 uninfected men were included in a prospective cohort of individuals who currently (65%), previously (13%), or never used TDF (22%). In a multifactorial model adjusting for demographics, estimated glomerular filtration rate, and TDF use, HIV infection was associated with higher urine A1M levels and a higher prevalence of detectable A1M. Proteinuria and African American ethnicity was positively correlated with urine α1m in both HIV-infected and uninfected participants. Regarding TDF exposure, the following observations were made:

Jotwani et al also attempted to adjust for the use of other antiretroviral drugs—which was difficult due to the variety of regimens—and found that TDF use had the greatest effect on urine A1M levels; lopinavir use was also significant. The study highlights the potential for A1M to act as a biomarker of TDF-associated tubulopathy and chronic kidney disease (CKD), especially in light of previous work demonstrating its role in predicting CKD progression and mortality in an HIV cohort of women.

In the current study, A1M was more strongly associated with TDF exposure than with proteinuria, but this is not surprising given that tubular dysfunction is often manifested by little-to-no proteinuria. It should be noted that while A1M levels correlated with TDF exposure and HIV status, interpreting a single A1M level in a patient is likely to be difficult given the overlap between the groups (see Figure 1 of Jotwani et al, which is featured in this post). It would also be interesting to study the effects of A1M level in other tubulointerstitial diseases, such as allergic interstitial nephritis, and how it behaves in acute versus chronic tubulointerstitial nephritis. Overall, the study demonstrates some intriguing findings, but more work is need until this biomarker may become clinically useful.