When I was a medical resident, a novel developmental therapy for the treatment of certain cancers was to medically shut off the blood supply and cause ischemia to the mass. Avastin (bevacizumab), or anti-VEGF (vascular endothelial growth factor) therapy, inhibited neovascularization and was eventually found to have clinical utility for treatment of colon, lung, glioblastoma, and renal cell cancers.  Presently, it is mostly used as a local intravitreous injection for treatment of macular degeneration and diabetic retinopathy.

However, an important side effect, proteinuria with hypertension, was noted in about 20% of patients receiving the drug. On renal biopsy, glomerular vascular endothelial cell swelling was found, identical to that seen in preeclampsia. This eventually linked VEGF inhibition to preeclampsia, and science has advanced over the last 20 years to link sFLT-1, endoglin, and other anti-VEGF proteins to the pathogenesis or preeclampsia, giving hope for an eventual therapy for this common vascular and glomerular disorder of pregnancy.

Now, oncology has once again given us a fresh new generation of anti-neoplastic agents, the checkpoint inhibitors (CPIs). These drugs have given a new hope to treat malignancies that were once considered incurable.  Metastatic lung, melanoma, or renal cell carcinomas are no longer considered a death sentence. Expertly reviewed by Shingarev and Glezerman in AJKD, these agents work their effect on the immune system by altering T-cell regulation. As detailed below, a tumor cell is typically presented to a T-cell by binding multiple sites in the immune synapse. This leads to T-cell anergy and exhaustion, allowing the tumor to continue to proliferate unchecked. 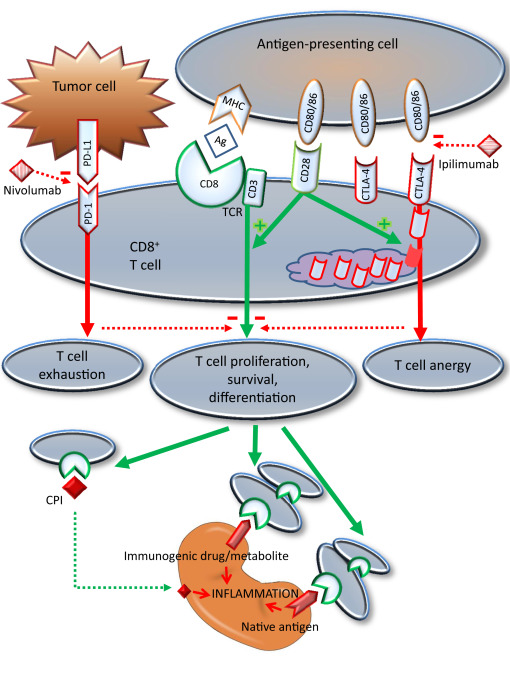 By blocking one or more of these sites with checkpoint inhibitors (i.e. nivolumab), T-cells are allowed to persist, proliferate, and attack the tumor. This increase in T-cell activity is meant to be a targeted antineoplastic effect, but often causes a T-cell storm, activating T-cells all over the body, leading to diseases nephrologists are familiar with, such as interstitial nephritis, vasculitis, lupus nephritis, etc.  Additionally, extrarenal syndromes such as vitiligo, rheumatoid arthritis, and inflammatory bowel disease have also been described with these agents.

Interstitial nephritis is the most common renal reaction, but, as the authors point out, it is different than typical drug-induced AIN which nephrologists typically encounter. It is delayed, and not due to direct drug effect, as would be seen with sulfa, penicillin, or NSAIDs, or even other antineoplastic agents such as cisplatin or ifosfamide. As Shingarev and Glezerman note:  “… the frequently delayed onset of AKI argues against the direct toxicity of these agents. This delayed presentation parallels the durability of the intended drug effect, which is more likely to be a function of longevity of T-cell activation rather than the elimination of half-life of an individual drug.”

Although the most common renal side effect is that of interstitial lymphocytic nephritis, other inflammatory renal diseases have been reported, often similarly delayed. Thrombotic microangiopathies and glomerular diseases such as minimal change, FSGS, pauci-immune vasculitis, lupus nephritis, IgA nephropathy, and secondary amyloid have all been associated with CPIs.

I am once again struck by the realization that a side effect from an oncology drug may give us eventual insight into the specific pathogenesis of “autoimmune” or inflammatory conditions. Could it be, that in the future, since inhibition of a specific checkpoint leads to rheumatoid arthritis, activating this exchange could treat it? Is it possible for future physicians to have more targeted therapy for interstitial nephritis? Lupus nephritis? Secondary amyloid? Could checkpoint activation rather than inhibition of specific cell surface proteins lead to targeted therapy for these diseases, and could this be done safely without increasing the risk of cancer? Ultimately, could we become so targeted that we could live in a prednisone-free era?

These drugs have revolutionized therapy for several malignant conditions thought prior to be incurable, but in the future, they may give rise to even more. Hopefully, similar to avastin for my generation, by honing in on the specific side effect profiles of the anti-cancer checkpoint inhibitors, the millennial and Z generations will look back on our non-targeted use of prednisone for inflammatory diseases as archaic.

3 Comments on Can Checkpoint Inhibitors Pave the Way for A Generation of Targeted Therapies for Autoimmune Diseases?