Anemia has been recognized as a complication of chronic kidney disease (CKD) since the 1800s. The reasons for this are manifold and include erythropoietin deficiency, iron deficiency, inflammation, decreased lifespan of red blood cells, secondary hyperparathyroidism, and blood loss, among others. There have been no new treatment options in the 30 years since the development of Erythropoietin (EPO) stimulating agents (ESAs). Though ESAs provide a better quality of life, fewer blood transfusions, and decreased left ventricular hypertrophy (LVH) compared to iron therapies, they also are associated with undesirable side effects such as hypertension, increased risk of malignancy, cardiovascular and thromboembolic events, and even mortality due to off-target effects.

When oxygen levels in the kidney drop, peritubular interstitial cells in the cortico-medullary junction activate a variety of genes to adapt to the hypoxia, including those that synthesize EPO with the goal of re-establishing oxygen delivery to the kidney. One such important pathways is the hypoxia-inducible factor (HIF) pathway, discovered in 1992 by Gregg Semenza and G. L. Wang, which resulted in a Nobel Prize in physiology/ Medicine in 2019.

HIF is a transcription factor. In short, hypoxia leads to the stabilization of HIF via prolyl hydroxylase inhibitors (PHIs), and oxygen causes proteolysis of HIF via hydroxylation of prolyl residues. The components that stabilize HIF are called HIF stabilizers. Figure 1 summarizes the physiology of HIF and their role in erythropoiesis. 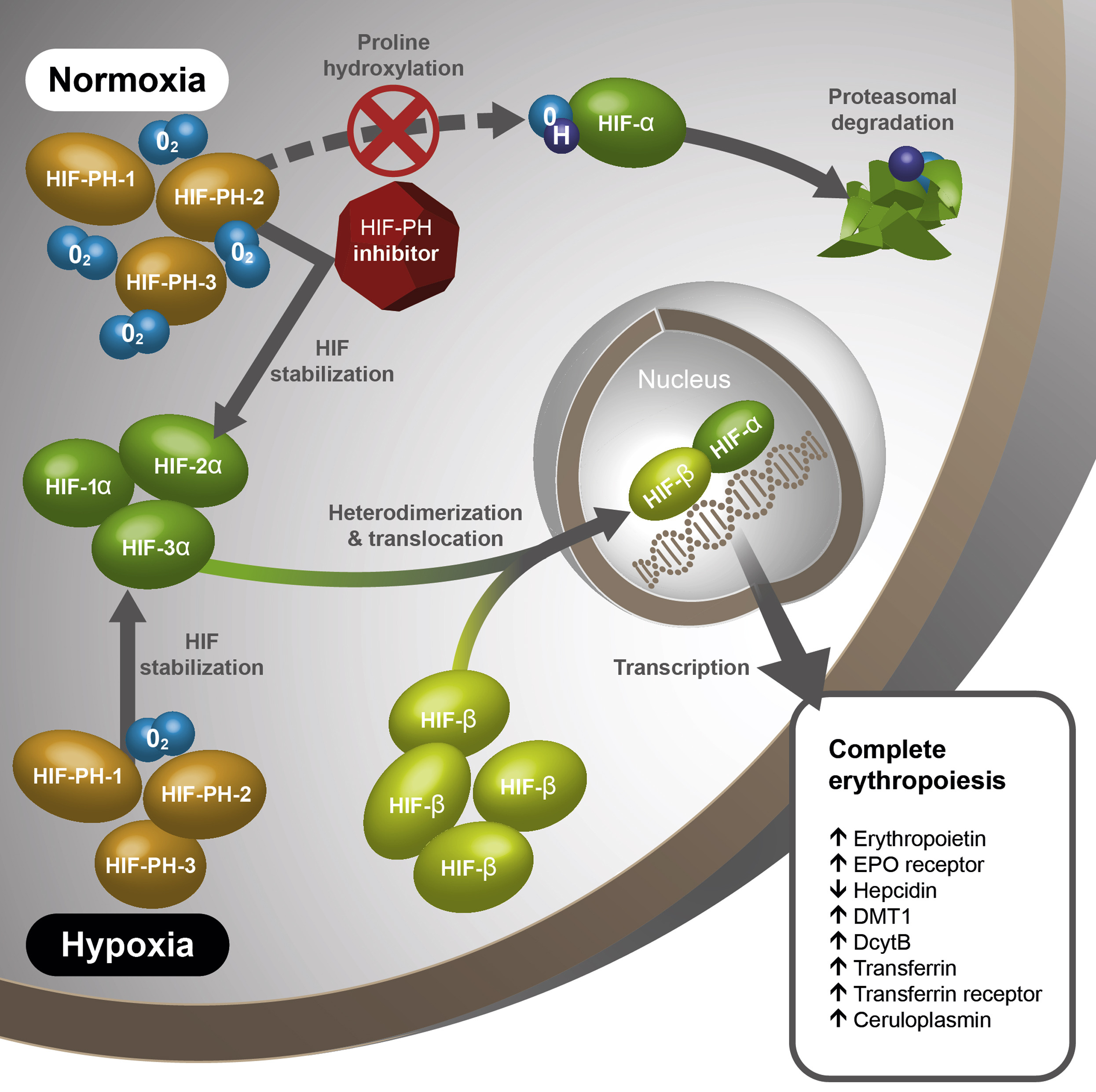 The HIF pathway operates in virtually all cells and controls the rate of transcription of hypoxia-responsive genes. In addition to assisting with erythropoiesis via gene upregulation, HIF has effects via upregulating divalent metal transporter 1 (DMT1) and duodenal cytochrome B (DcytB) to increase intestinal iron absorption, suppress hepcidin, and increase expression of erythropoietin and transferrin receptors on erythroblasts.

HIF-PHIs are orally administered anemia drugs that are approved for marketing in Japan and China and recently were approved by the European commission. They are not yet approved by the FDA in the United states.  This recent AJKD paper from Wish et al summarizes the discussions on Roxadustat, Vadadustat, and Daprodustat from a scientific workshop sponsored by the National Kidney Foundation held in 2019.

Clinical studies conducted on Roxadustat showed that it is non inferior to epoetin alfa in patients on dialysis over a 26-week treatment period, although hyperkalemia was increased in patients on roxadustat. In CKD patients not on kidney replacement therapy (KRT), Roxadustat increased hemoglobin (Hgb) by 2g/dL compared to placebo, and again hyperkalemia and metabolic acidosis were noted. In 3 global phase 3 studies in CKD patients not on KRT (N=4270), Roxadustat increased Hgb of 1.85 g/dL vss 0.13 g/dL for the placebo group during a mean exposure of about 1.62 years. Roxadustat decreased the need for ESA treatment, IV iron, or blood transfusion. Using time to first major adverse cardiovascular event (MACE) as an endpoint, there was no difference in the treatment arm. The overall rate of adverse events and serious adverse events was found to be similar between roxadustat- and placebo-treated patients.

Other beneficial effects observed with roxadustat, though not consistently reported, were greater decrease in hepcidin levels compared to epoetin or placebo and lowering of LDL- cholesterol.

In CKD patients without KRT, vadadustat was compared to darbepoetin in two studies, one in ESA-naive patients (n=1751) with Hb <10 g/dL, and one in ESA-treated patients (n=1725) with Hb 8–11 g/dL in the United States and 9–12 g/dL outside the United States. Though the rise in Hgb was similar in both arms, vadadustat did not meet the non inferiority criteria due to a slightly higher rate of pooled MACE event in this cohort.

A phase 3 study randomized 271 patients on dialysis in Japan to either continuation with darbepoetin or conversion to daprodustat over 52 weeks. A rise in Hb was non-inferior and the need for IV iron was decreased in the daprodustat group. The small sample size limited the evaluation of safety, and the United States is moving through phase 3 studies.

Table 1 shows the pharmacokinetic properties of the 3 HIF-PHI drugs Daprodustat, Roxadustat and Vadadustat.

Although we have several ongoing trials, the evaluation of adverse events is limited to a relatively short treatment period. The early data suggests that there is MACE non-inferiority compared to ESA in patients on dialysis, but this is less clear in patients with CKD without the need for kidney replacement therapy.  Additionally, outcomes data on thrombotic events, cholesterol lowering effects, hyperkalemia, malignancy, and even aspects like pulmonary arterial hypertension and cyst growth leave more questions than answers currently.  Box 1 summarizes possible safety issues and future research recommendations. 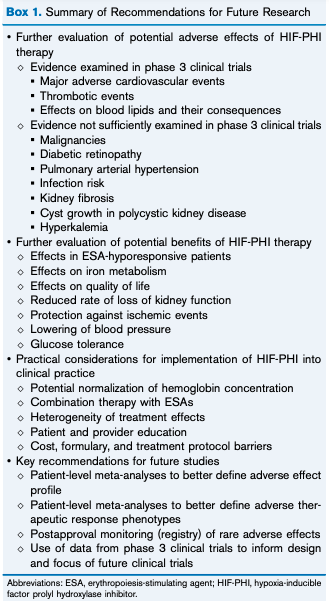 The knowledge of oxygen homeostasis pathways and its application in developing novel therapeutics in CKD is very exciting. At the same time, balancing the off-target effects of these compounds is very challenging. The ongoing studies may provide more data to ensure the efficacy and safety of these compounds, which will hopefully translate into a new tool in the management of CKD patients.