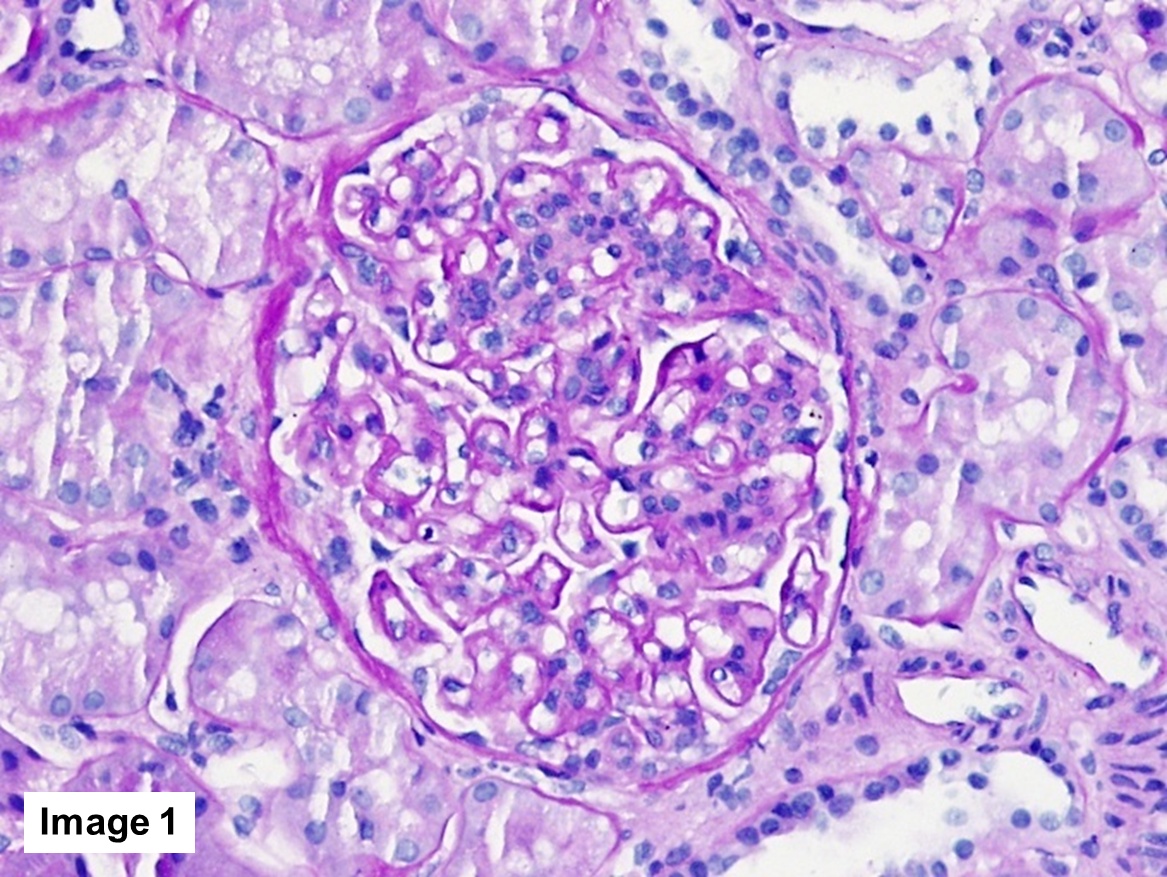 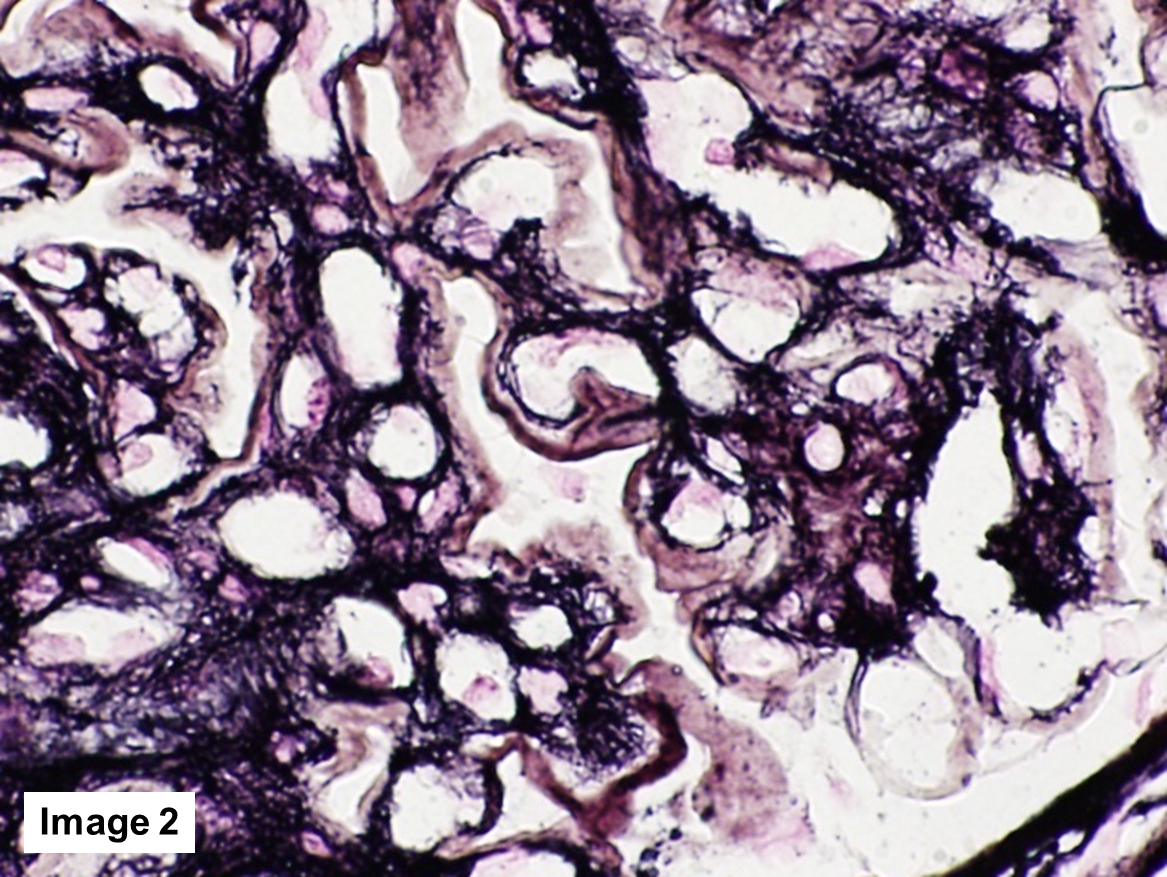 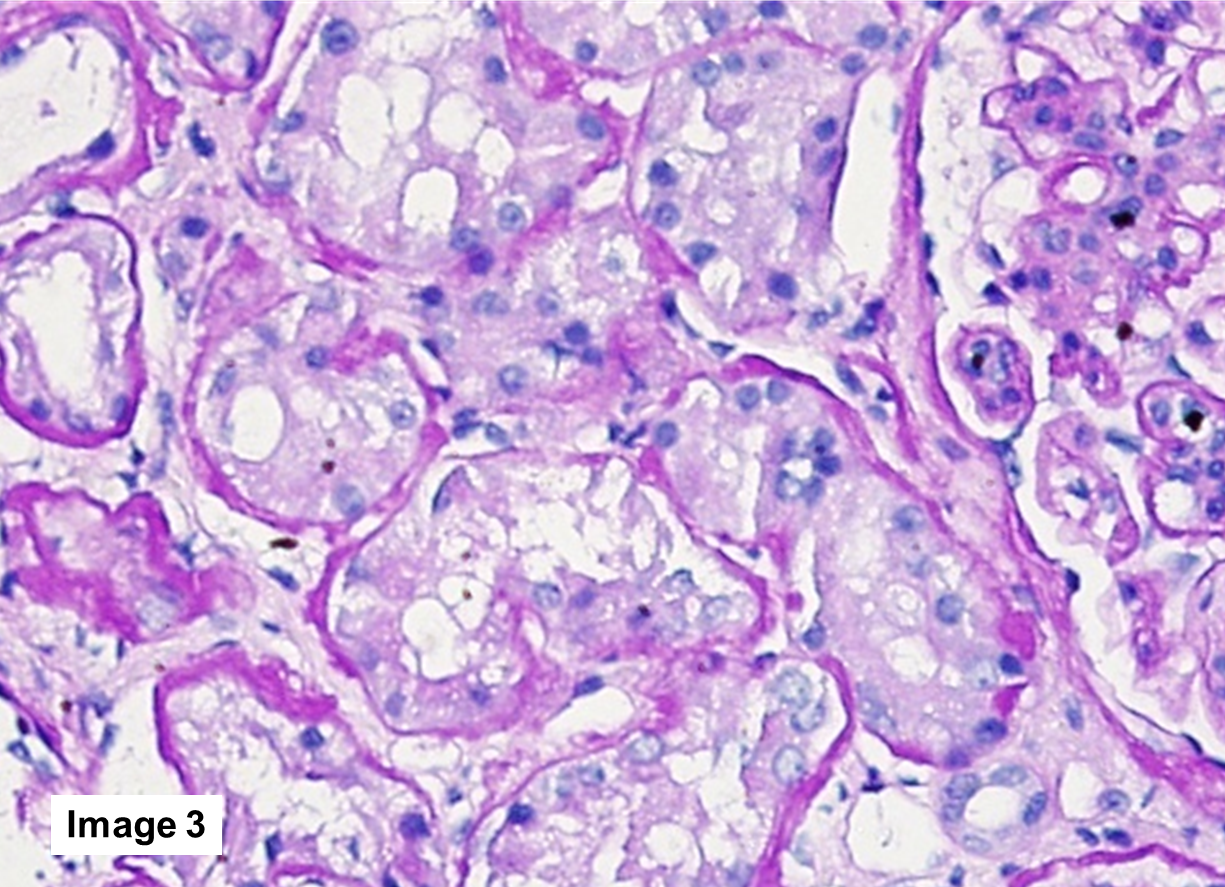 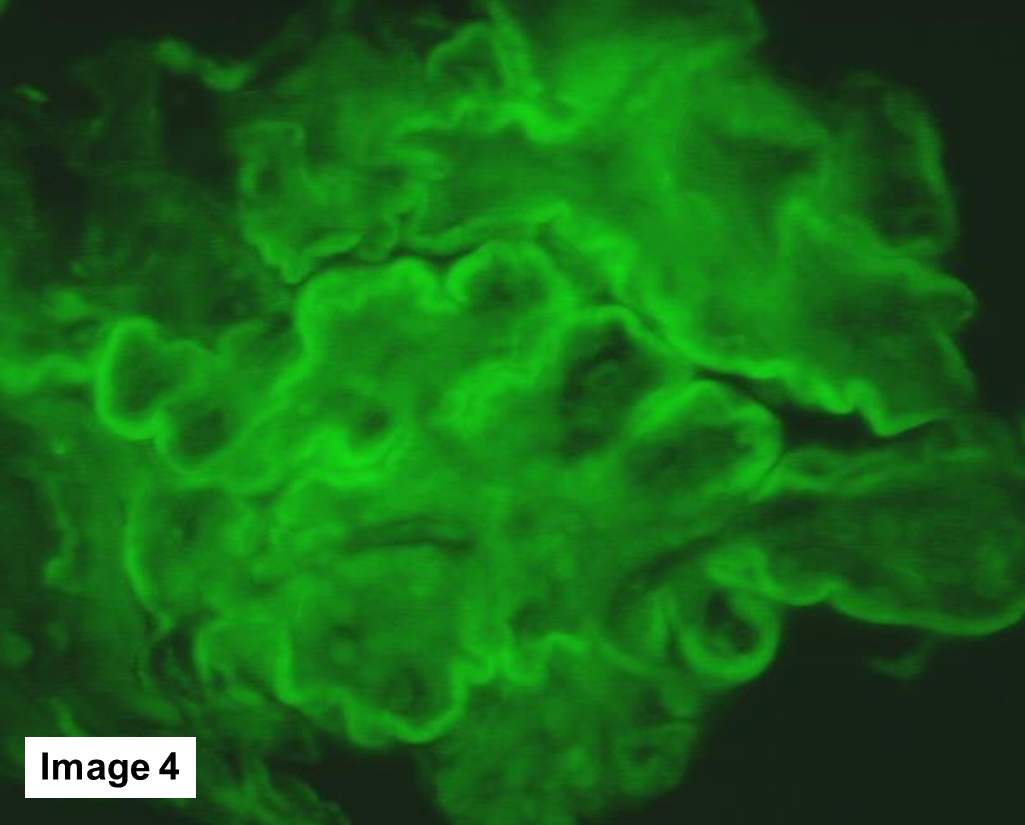 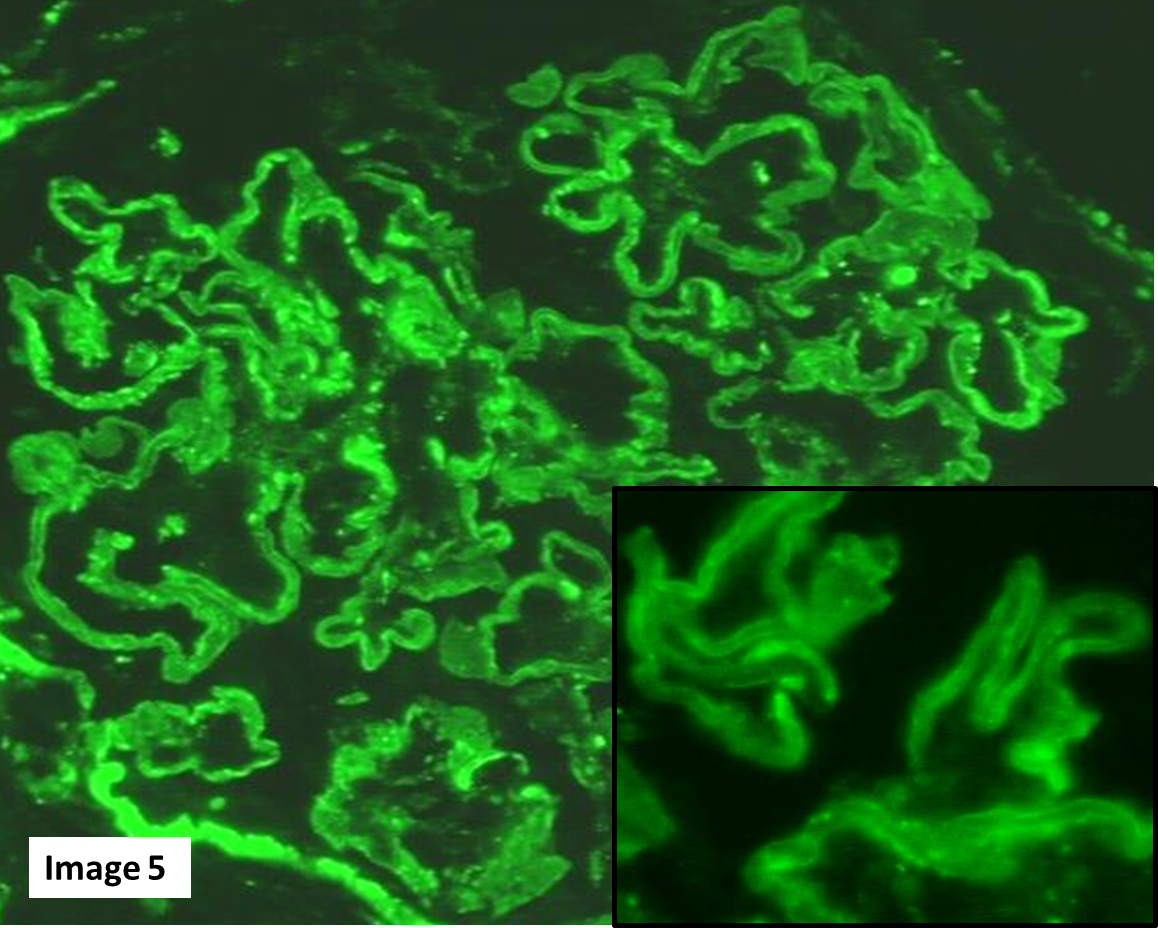 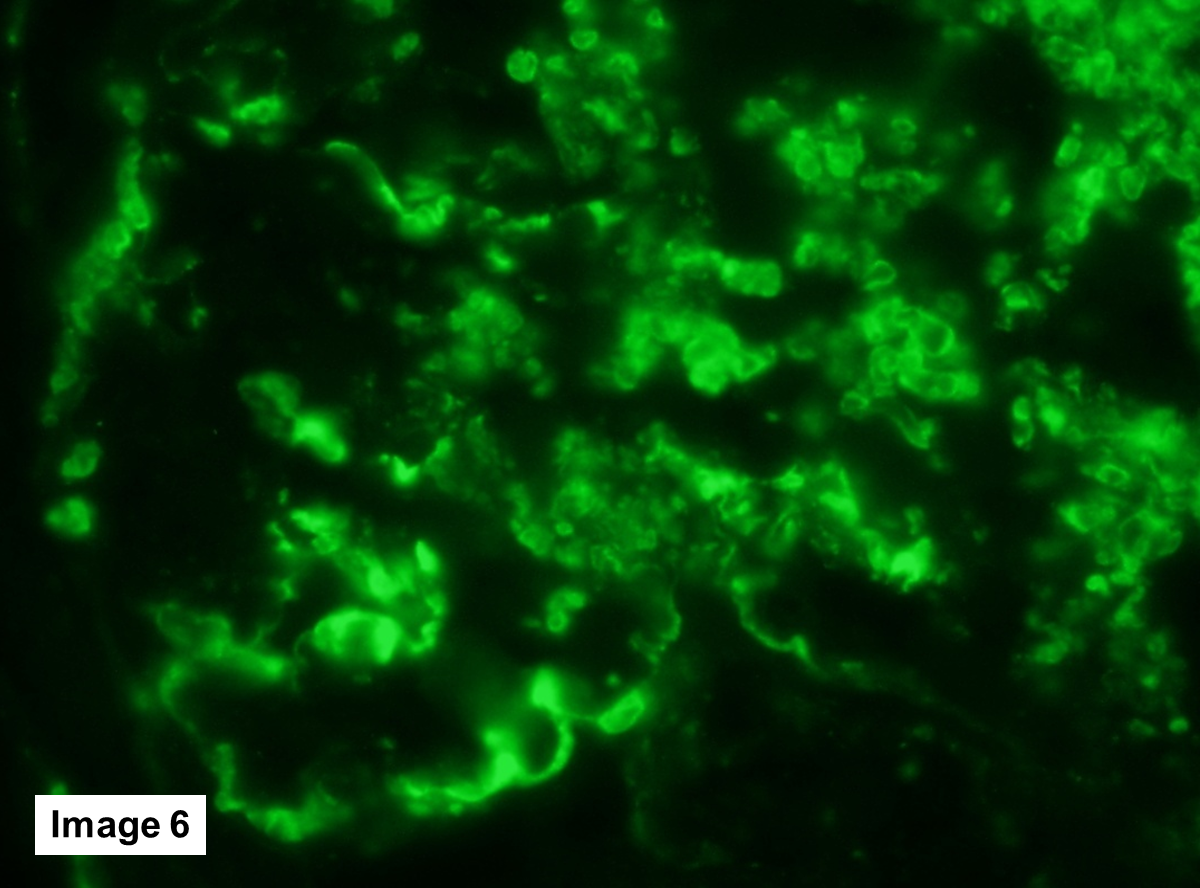 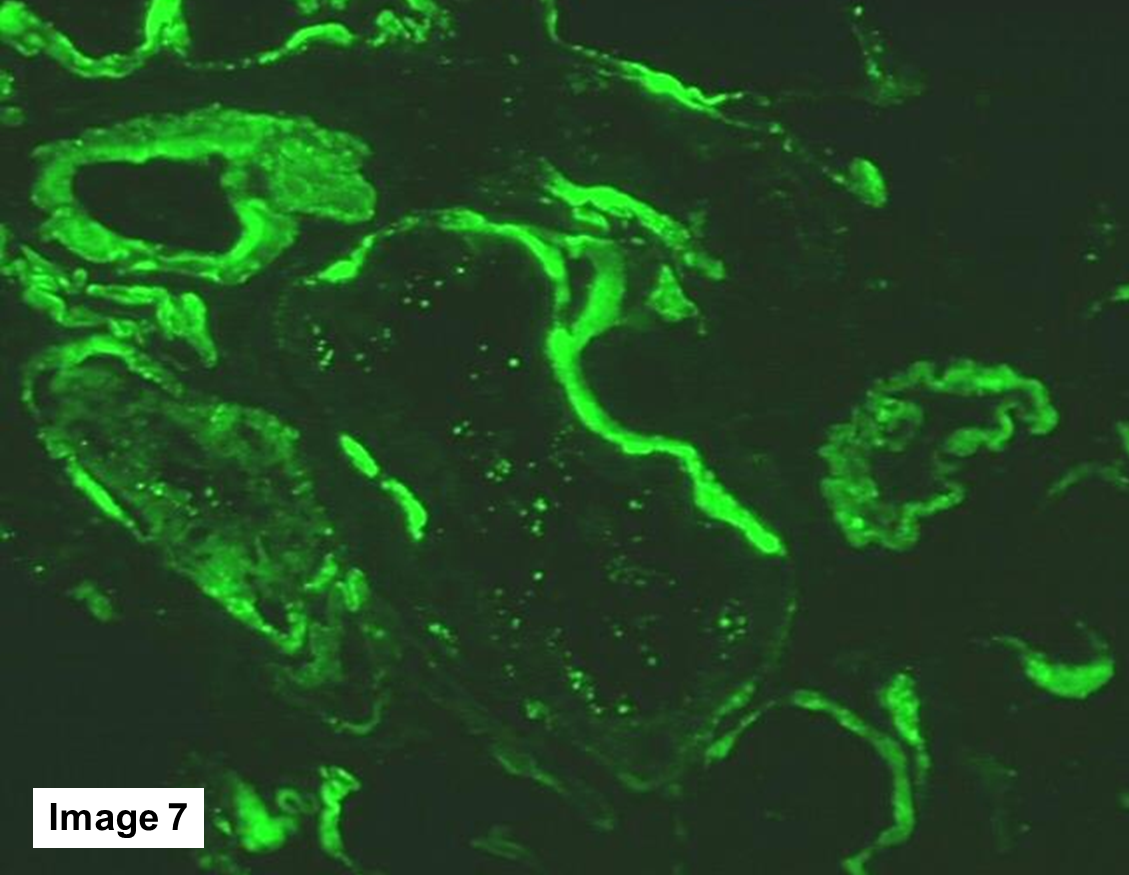 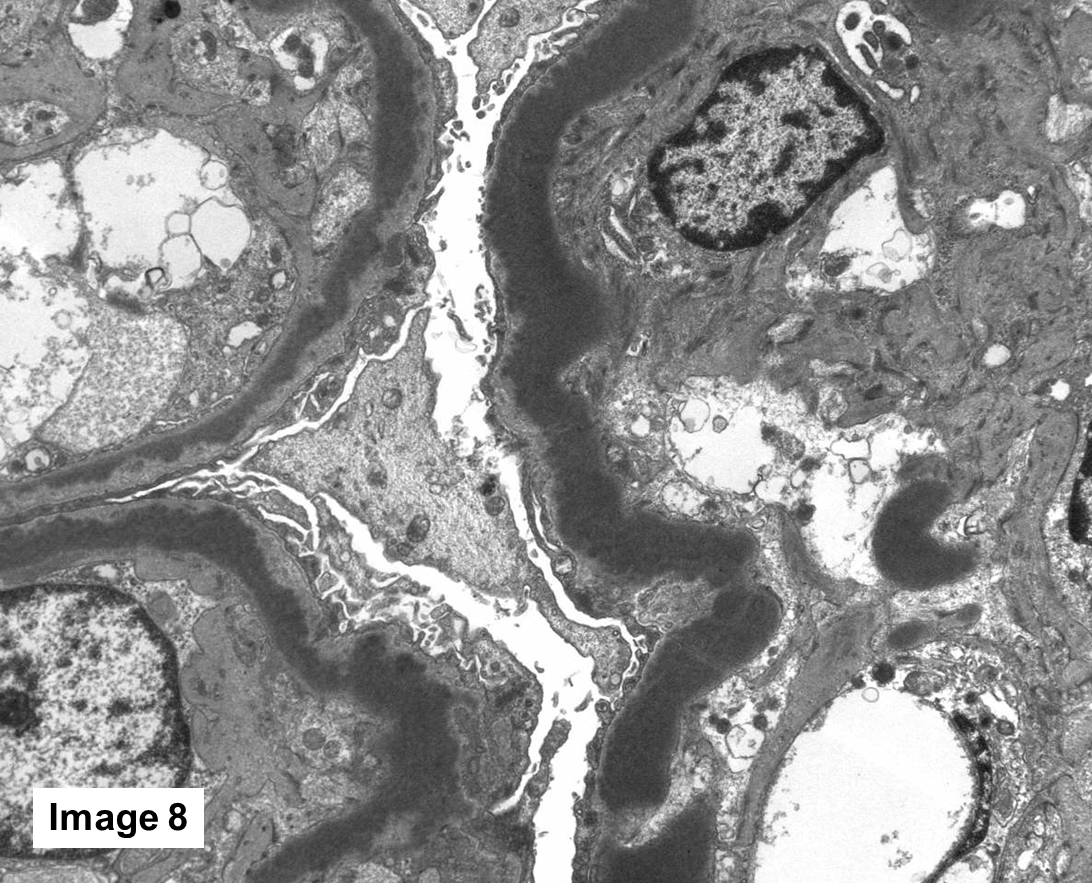 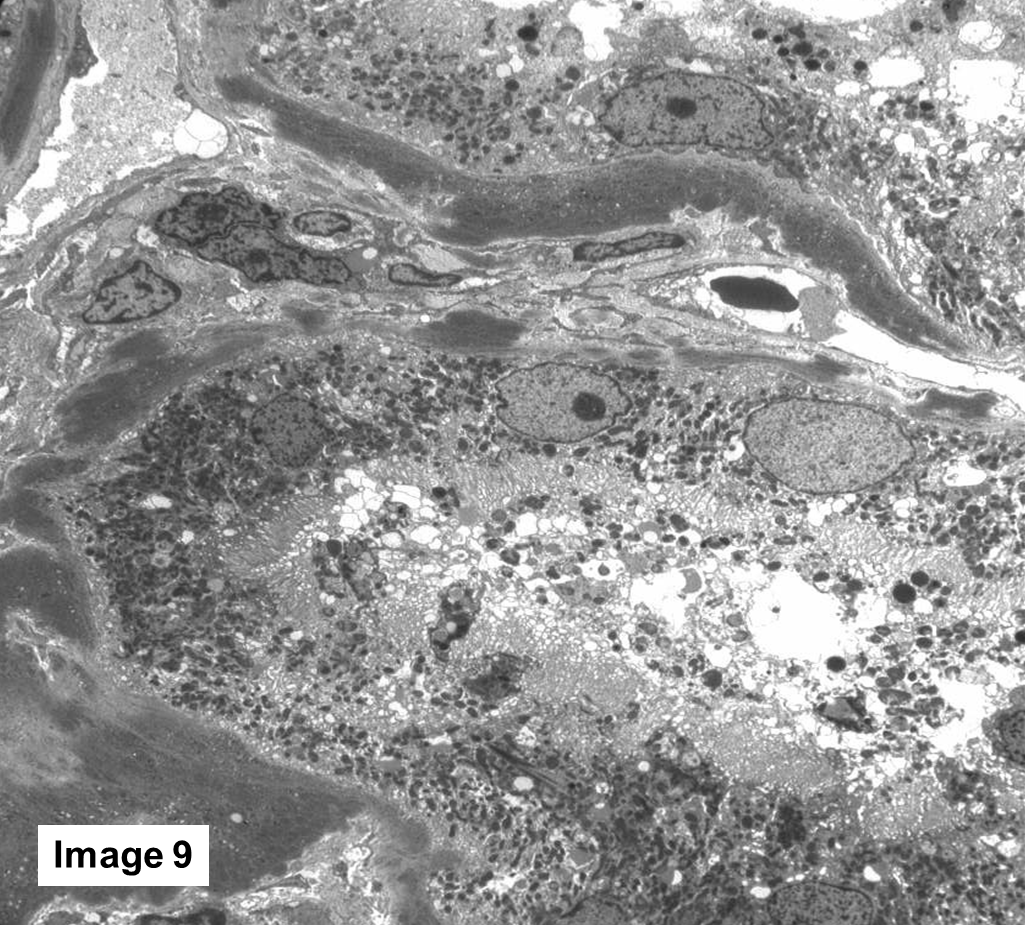 An 18-year-old white man was found to have microscopic hematuria and proteinuria during a routine checkup. A 24-hour urine collection contained 2.5 gram protein, and sediment evaluation revealed 5-10 RBCs/HPF. His serum creatinine was 0.7 mg/dL, eGFR 138 mL/min/1.73m2, and creatinine clearance 156 mL/min. His blood pressure was 154/80 mmHg. He was 6 feet 5 inches tall and weighed 160 pounds. His serum C3 and C4 were 25 mg/dL and 42 mg/dL, respectively. Other serologic testing was unremarkable. His family history was negative for kidney disease. A kidney biopsy was performed. The most likely diagnosis:
Postinfectious glomerulonephritis
Incorrect.
Monoclonal immunoglobulin deposition disease
Incorrect.
C3 glomerulopathy
Correct! Paraffin sections for light microscopy contain renal cortex with up to 36 glomeruli per section. Eight glomeruli were globally sclerotic; the remaining glomeruli were somewhat enlarged with mild to moderate segmental mesangial and endocapillary hypercellularity (Image 1). Methenamine silver stain revealed several double contours along the glomerular capillary loops (Image 2).There was mild to moderate interstitial fibrosis and tubular atrophy involving approximately 25% to 30% of the renal cortex. Several nonatrophic tubules showed segmental glassy PAS-positive thickening of the tubular basement membrane (Image 3). The vasculature was unremarkable. A Thioflavin T stain showed linear, ribbon-like staining along the glomerular (Image 4) and many tubular basement membranes. Frozen sections cut for immunofluorescence contained three glomeruli. There was moderate, somewhat segmental but diffuse, ribbon-like glomerular capillary fluorescence for C3 (Image 5). Along some glomerular capillary loops, the C3 staining had linear double contours. Coarsely granular mesangial deposits were also seen, which, under immersion oil, had a ring-like appearance (Image 6). There was widespread but segmental ribbon-like tubular basement membrane staining for C3 as well (Image 7). Antibodies to other immunoreactants (IgG, IgA, IgM, C1q, kappa and lambda light chains, fibrinogen, and albumin) did not show relevant glomerular or tubulointerstitial fluorescence. Two glomeruli were available for electron microscopy. Ultrastructurally, very electron-dense, ribbon-like, intramembranous deposits were seen along the glomerular capillary basement membrane (Image 8). Mesangial dense deposits were also seen. Ribbon-like electron-dense deposits were noted in numerous tubular basement membranes as well (Image 9). There was approximately 50% foot process effacement. No endothelial tubuloreticular inclusions were identified. The ultrastructural findings are diagnostic of DDD. DDD was formerly called type II membranoproliferative glomerulonephritis because the glomeruli frequently displayed a membranoproliferative pattern of injury. However, DDD is now classified under C3 glomerulopathy. C3 glomerulopathy is a glomerular disease characterized by C3 accumulation in the glomeruli in the form of electron-dense deposits. Patients have either genetic or acquired abnormalities in the activation of the alternate complement pathway. Although the glomeruli in DDD most frequently have a membranoproliferative pattern, other morphologic patterns such as segmental proliferative lesions (current case) may occur. The characteristic finding is granular to linear, ribbon-like glomerular C3 deposits. It is not uncommon that, using immersion oil and an x100 objective, the ribbon-like deposits have double contours and the mesangial deposits appear as mesangial rings under the immunofluorescence microscope. It is likely that the C3 staining is strongest at the periphery of the deposits. However, such fine double-contours and mesangial rings are not always evident, particularly if the freezing technique of the kidney biopsy and cutting of frozen sections are not optimal. The diagnostic lesion in DDD is seen under the electron microscope in the form of very dense, homogeneous, intramembranous ribbon-like or sausage-like electron-dense deposits embedded in the glomerular basement membrane. Young patients, such as this patient, usually have genetic abnormalities involving one of the genes encoding complement regulatory proteins (most frequently factor H and its regulatory proteins). C3 nephritic factor is common in DDD. Sometimes antibodies to factor H may be found. Postinfectious glomerulonephritis frequently has C3-restricted deposits in the glomeruli, and in rare instances even elongated intramembranous deposits similar to the sausage-like deposits in DDD. However, in postinfectious (in particular in poststreptococcal) glomerulonephritis, the deposits are mostly mesangial and subepithelial. In poststreptococcal glomerulonephritis there are many large subepithelial deposits (humps). In rare instances the differential diagnosis may be difficult because occasionally humps may also occur in DDD, and there is now evidence that infection may occasionally trigger the development of C3 glomerulopathy. Serum C3 levels are depressed in both DDD and postinfectious glomerulonephritis. Fortunately, because of the characteristic ultrastructural findings, the diagnosis of DDD is usually obvious. Linear to ribbon-like glomerular and tubular basement membrane deposits are seen in monoclonal immunoglobulin deposition disease. However, in monoclonal immunoglobulin deposition disease the deposits stain for a light or, less commonly, for a heavy chain. C3 staining is usually negative, unless the monoclonal deposit is a complement fixing heavy chain. Although the deposits in monoclonal immunoglobulin deposition disease are present within the glomerular and tubular basement membrane, their appearance is different. In monoclonal immunoglobulin deposition disease the deposits are finely granular punctate electron dense deposits, not the homogeneous dense deposits of DDD. DDD occasionally can be associated with an underlying monoclonal gammopathy, particularly in older patients. But even if DDD is related to monoclonal gammopathy, the diagnosis is DDD, associated with an underlying monoclonal gammopathy. Thioflavin T is a sensitive stain for amyloid deposition. However, it is less specific than the Congo red stain. Occasionally deposits in DDD are also positive for Thioflavin T, such as in this patient’s biopsy. None of the findings in this young patient are suggestive of amyloidosis. Why thioflavin T stain is sometimes positive in DDD and its clinical significance are currently unclear. DDD was called MPGN type II in the past, as mentioned above. According to current criteria, MPGN can only be diagnosed if the glomerular deposits, in addition to C3, also contain an immunoglobulin (IgG). In this patient, the glomerular deposits contained only C3; therefore, the diagnosis of DDD, a form of C3 glomerulopathy, is appropriate.
Amyloidosis
Incorrect.
Membranoproliferative glomerulonephritis (MPGN)
Incorrect. 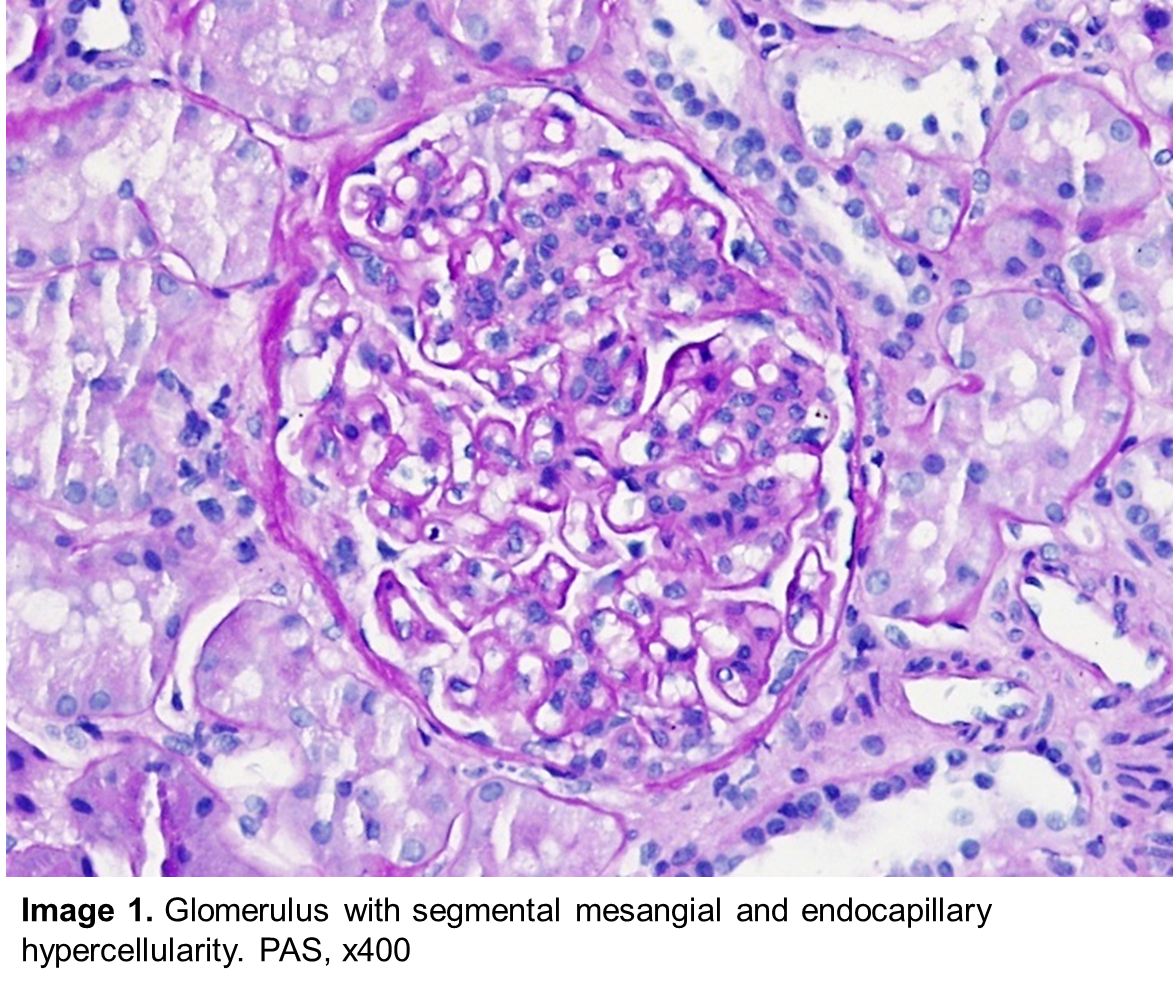 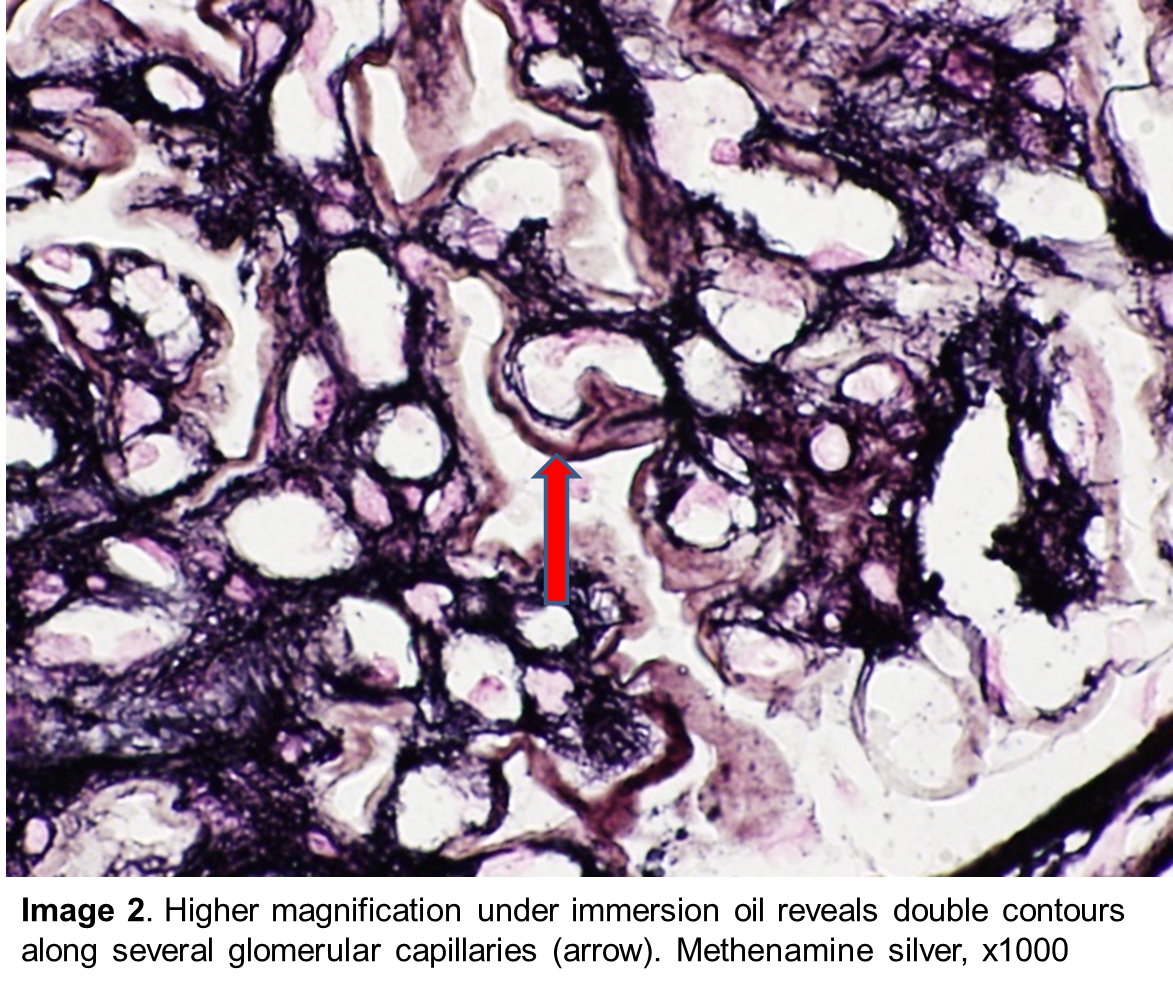 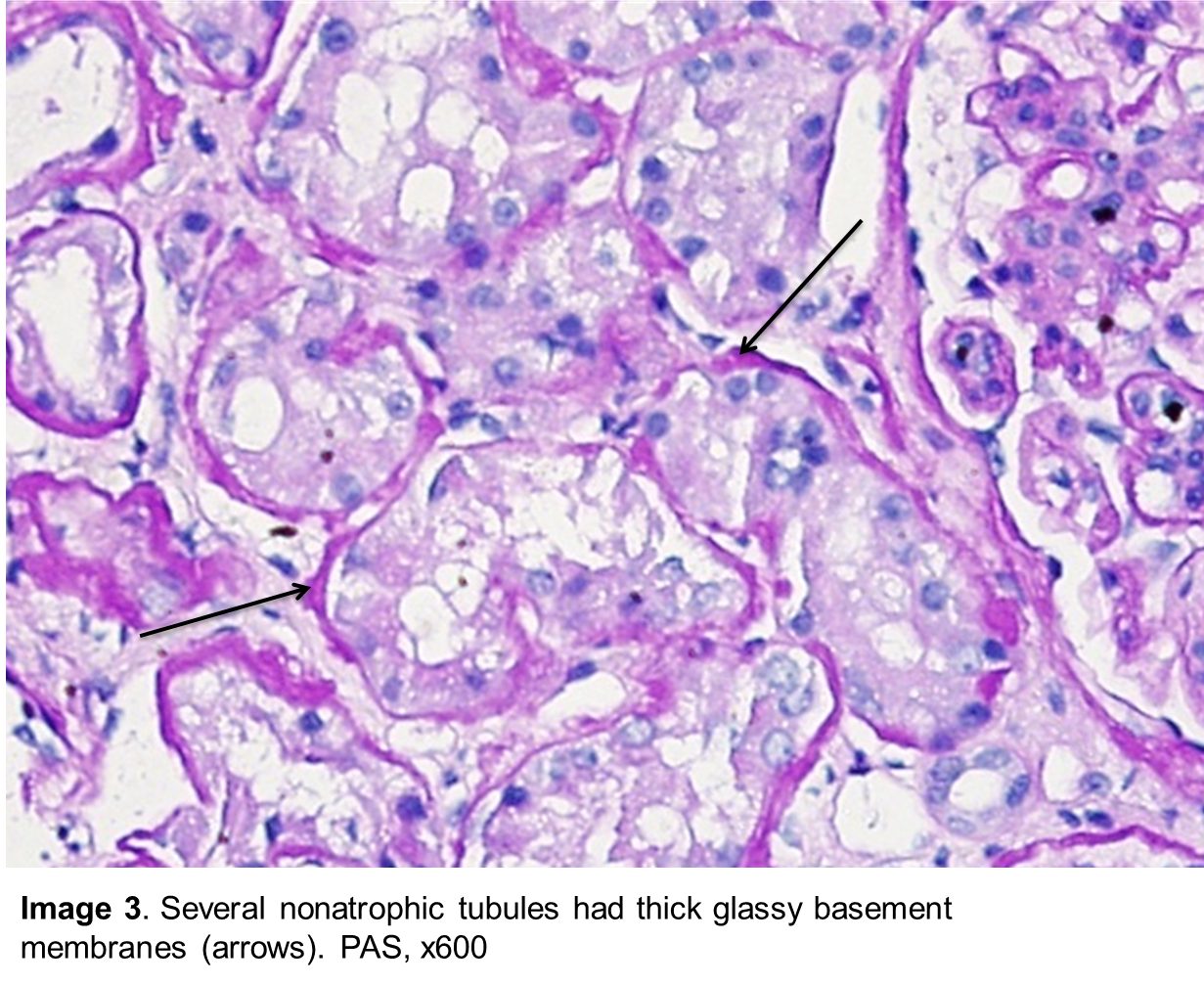 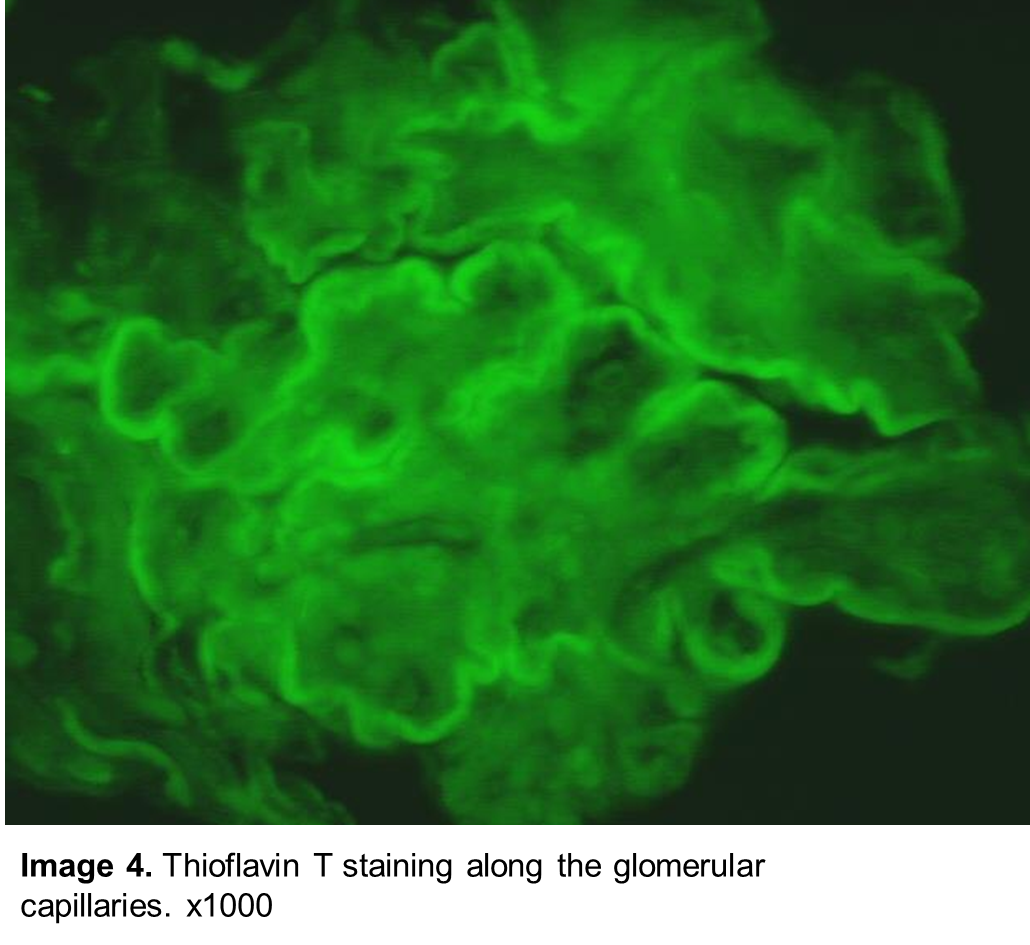 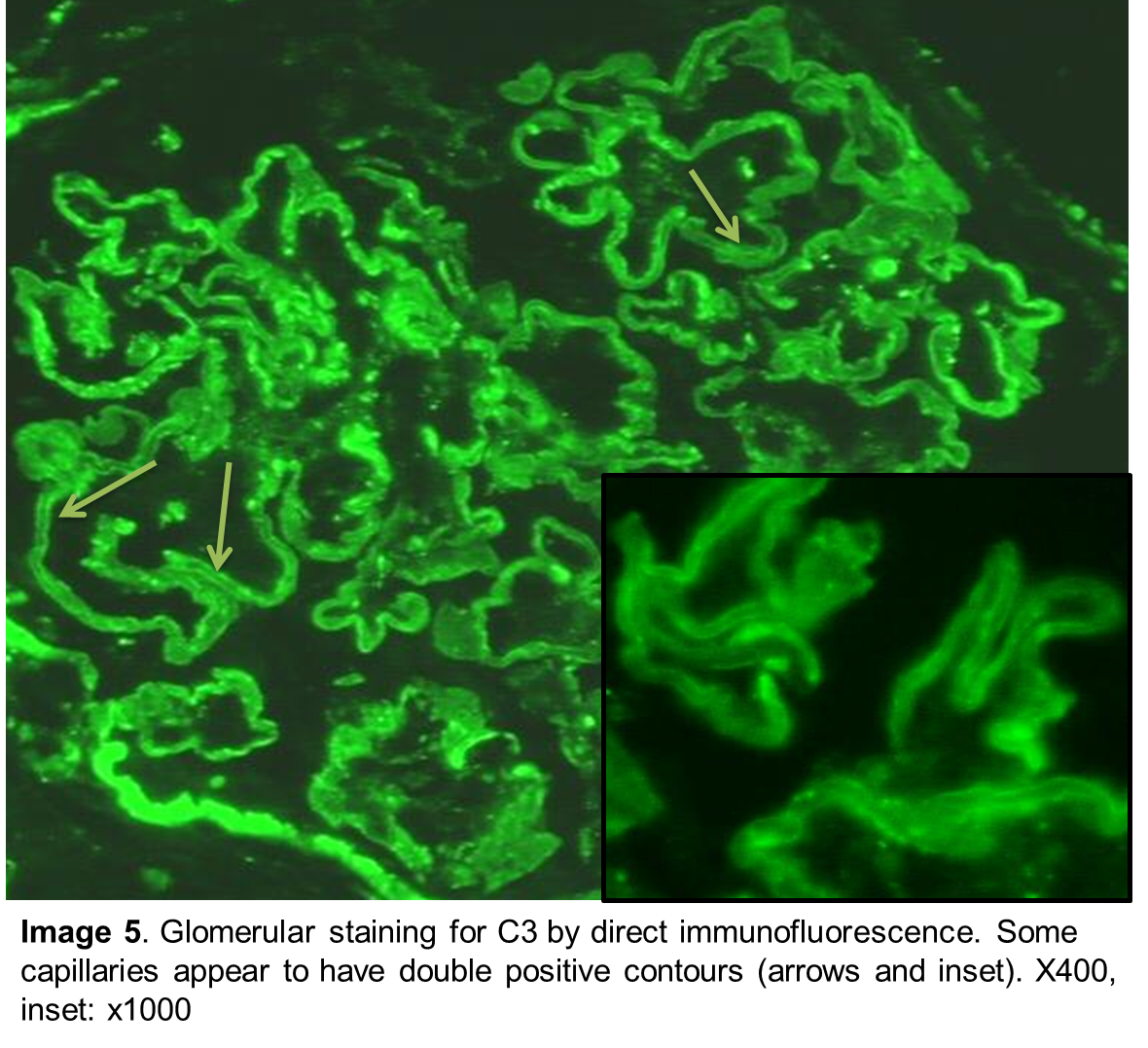 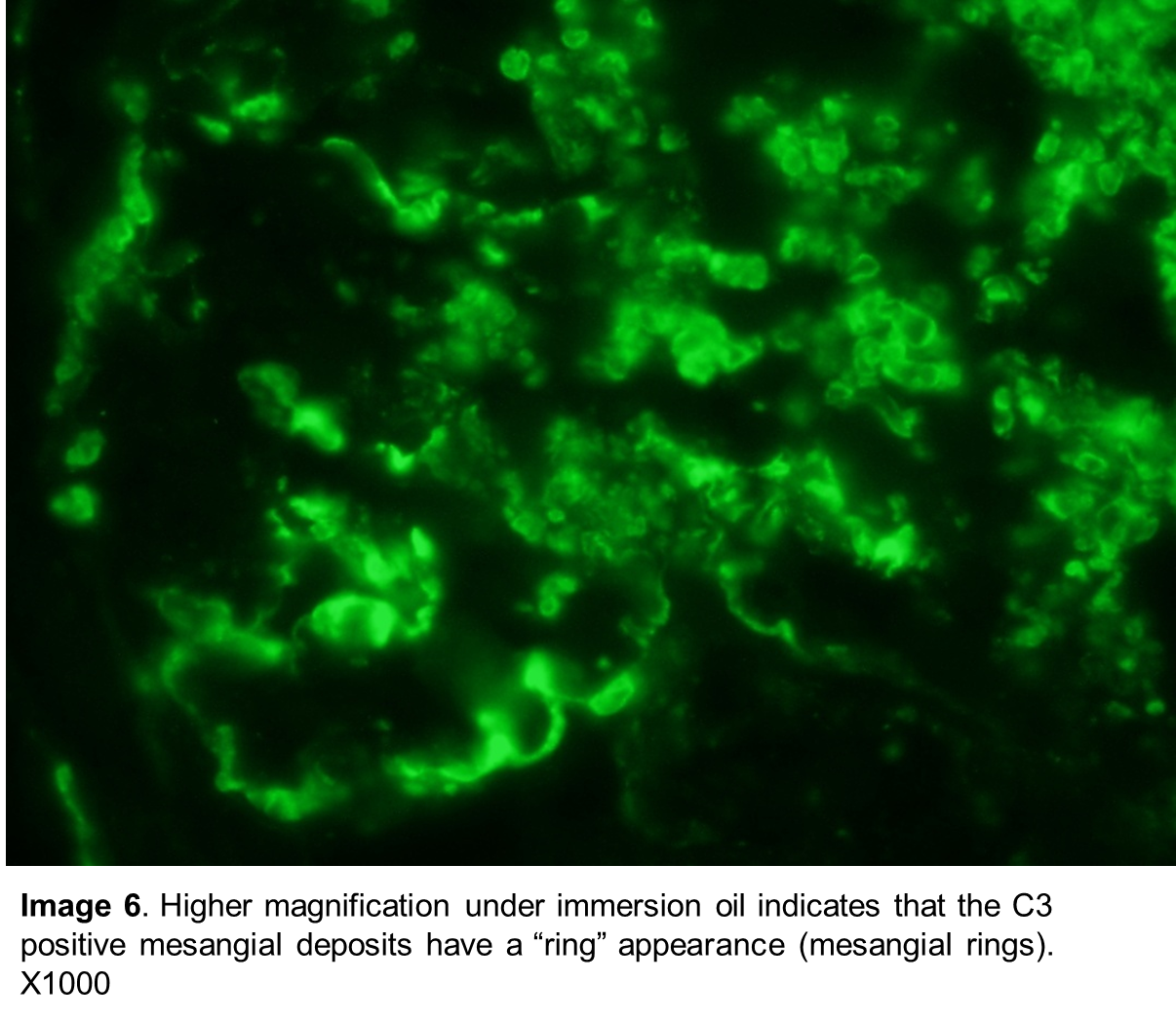 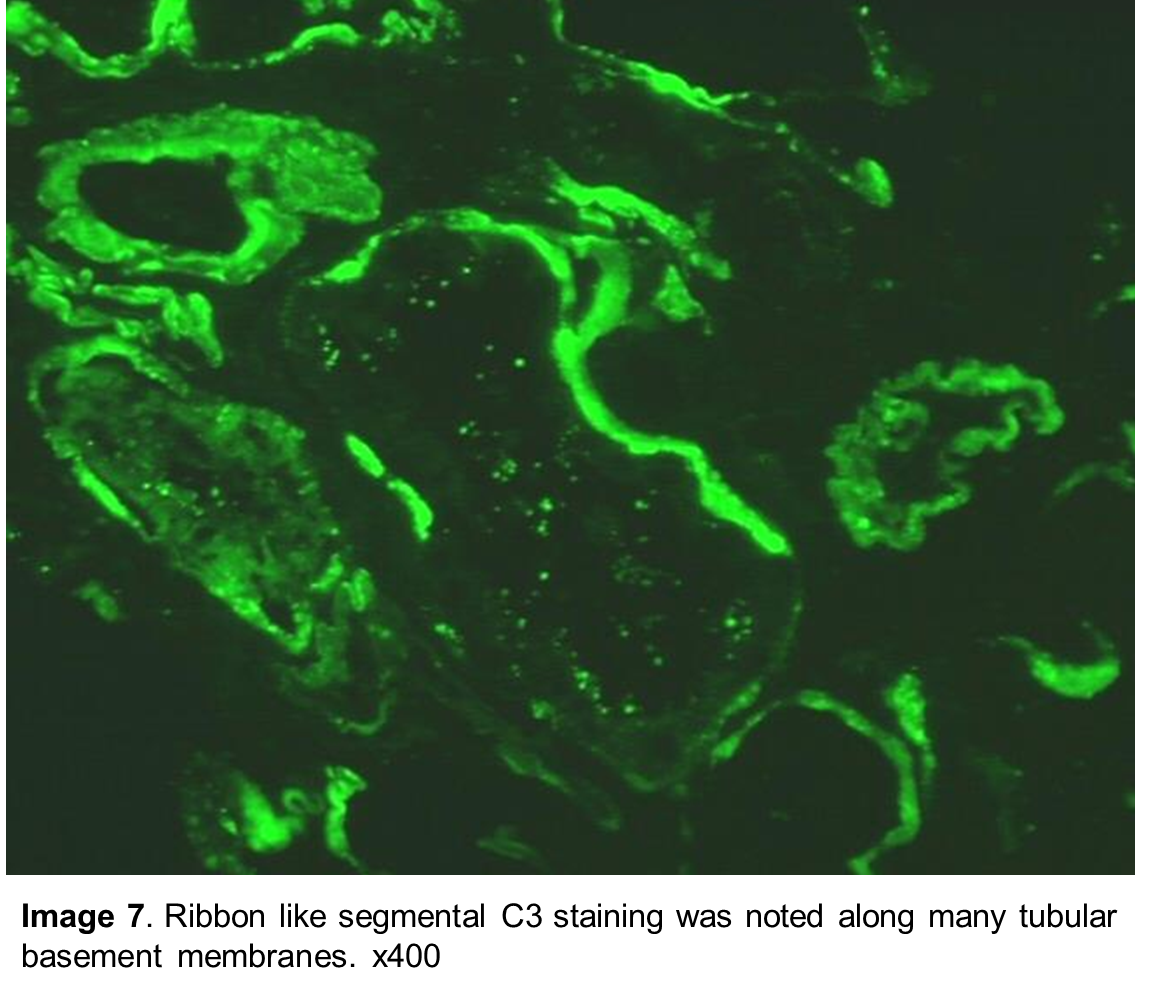 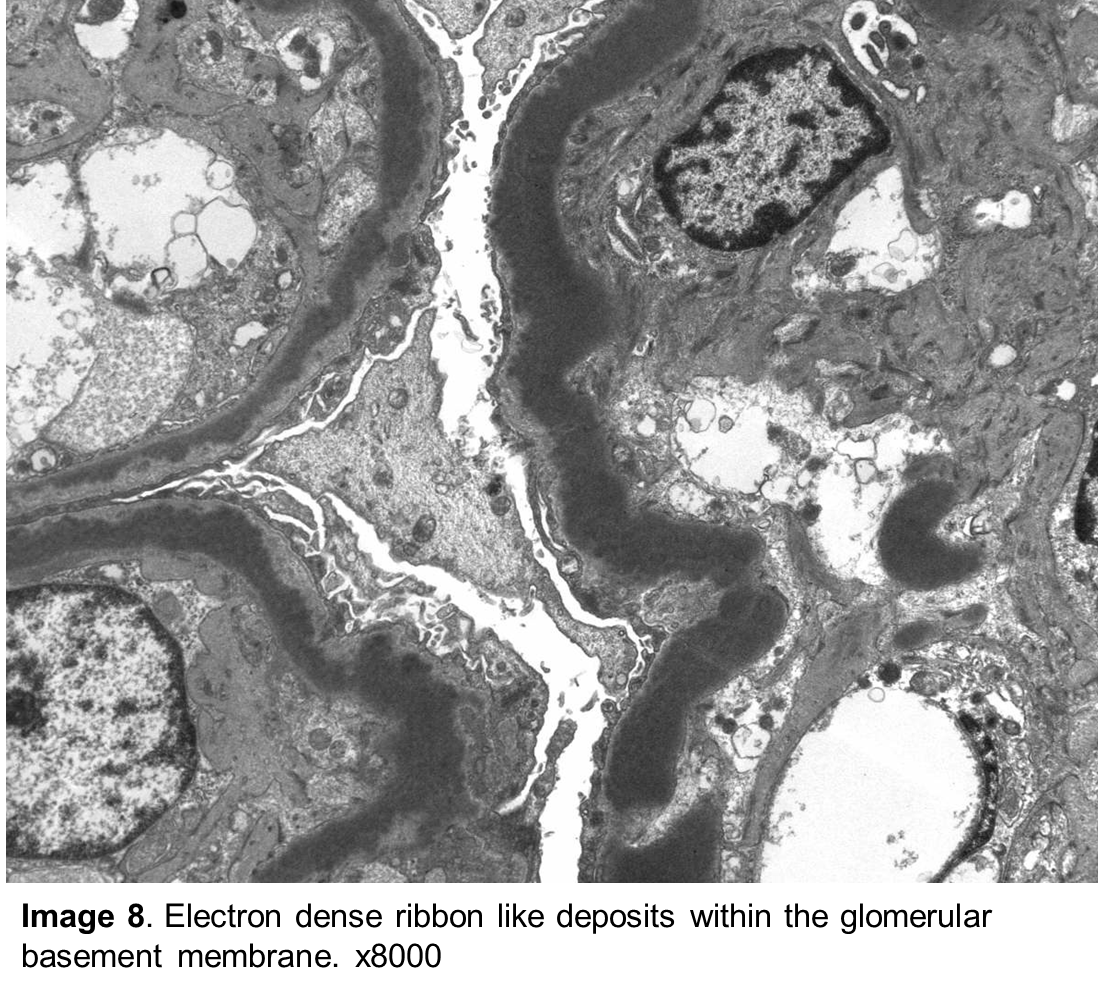 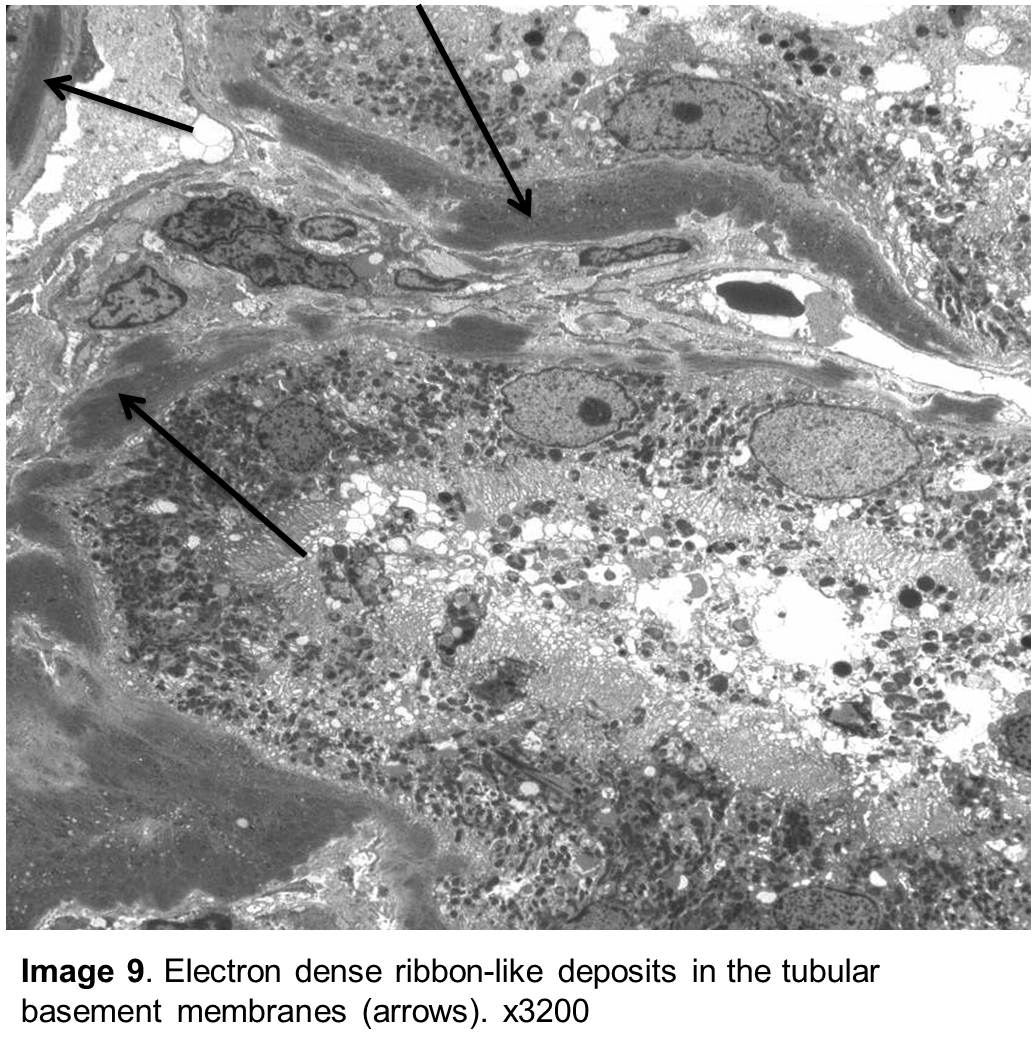