One of the major highlights of KidneyWk 2016 is the State of the Art Lectures, which are presented daily in the plenary session by a renowned scientist. These are topics of interest in the broader medical sense – and these experts provide a high level perspective on fascinating research. They are tasked with distilling their lifelong passion and extensive body of research into about half an hour, which we will further summarize in the next few paragraphs.

Day 1: The Causes and Consequences of Obesity: Lessons from Genetics (Stephen O’Rahilly) 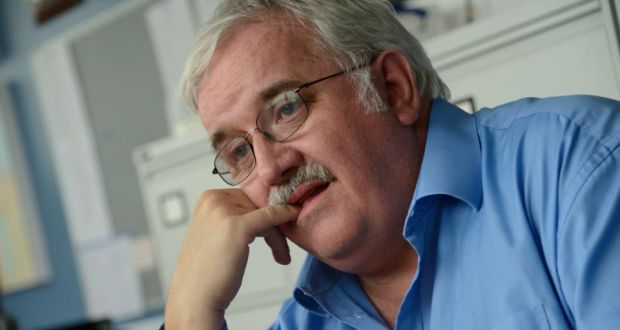 Dr O’Rahilly is a Professor of Clinical Biochemistry and Medicine at Cambridge, UK, among many other things (and also has his own Wikipedia page). He has done genetic studies primarily in humans, despite, as he put it, the fact that our species has long generation times, it’s hard to control breeding, and it’s difficult to make simple genomic changes (eg knockout variants). On the other hand, there are distinct advantages in using the sapiens, including that significant natural variation exists, and we are highly outbred – these variants he has studied would not survive in the animal world. Lastly, sophisticated tools do exist to study human physiology, especially the interplay with higher nervous system functions, which are important to study obesity. He showed four simple but crucial steps on the path to avoid diabetes: maintain energy balance, safely store excess energy in adipose tissue, maintain insulin sensitivity in muscle and liver, and to not exhaust your pancreatic beta cells. His work in leptin, which modulates satiety, culminated in an extremely fulfilling case of successful treatment of a leptin deficient individual with exogenous leptin. The complex interplay of satiety and obesity and its genetic basis was demonstrated in a cohort of children with genetic variants of the FTO (fat mass and obesity associated) gene. The individuals with AA allele homozygosity exhibited reduced satiety and increased obesity, providing a genetic driver of eating. But the obesity phenotype is not always essential for insulin resistance to be observed. Among others, mutation of the gene encoding perilipin inhibit triglyceride storage in adipocytes, resulting in smaller fat cells, and accompanied by insulin resistance, fatty liver and liodystrophy, as shown in three families. 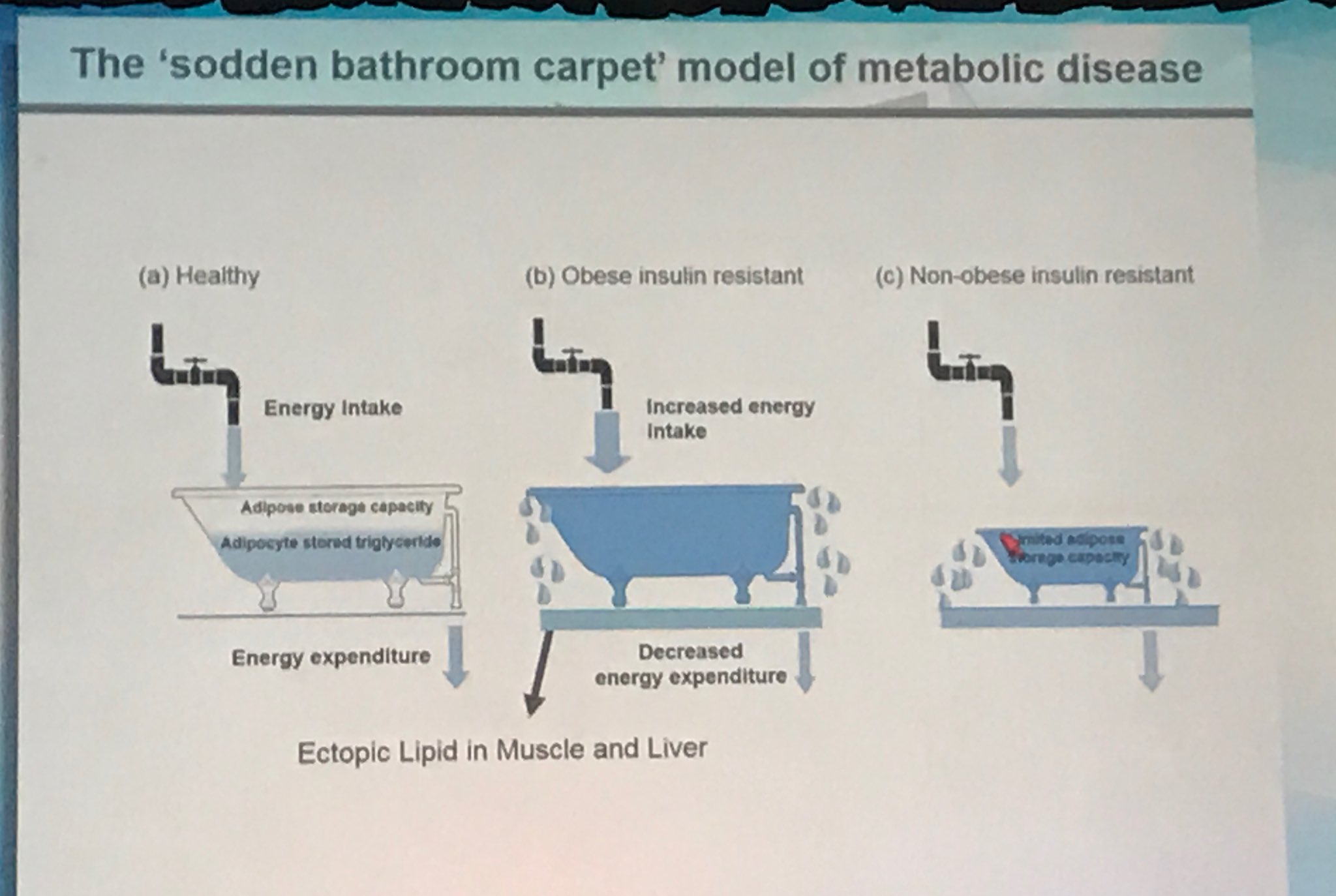 To tie this narrative together, Prof O’Rahilly concluded with a ‘sodden bathroom carpet’ model of ‘chronic overnutrition’ as he prefers referring to obesity. In those who are in energy imbalance, their bathroom tub (the adipose tissue capacity) overflows, resulting in insulin resistance and fat accumulation in muscle and liver. However, in some with smaller tubs (such as the example above with perilipin mutations) this could occur even without high energy intake. Thus, in the space of 30 minutes, he gave a whirlwind tour of the genetics of obesity, its mechanical and biological consequences, and finished with an elegant model of how it all comes together. 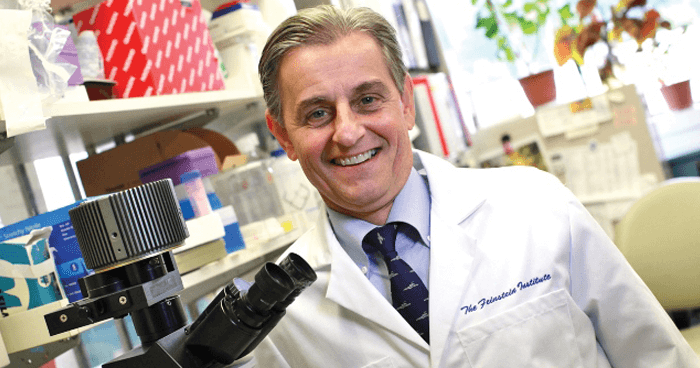 Professor Tracey, of the Feinstein Institute for Medical Research and the Hofstra Northwell School of Medicine (also with his Wikipedia page), is an unlikely neurosurgeon, someone who seemed as comfortable discussing physiology as he was discussing physics, or the nervous system itself. He decided at an early age to become a brain surgeon, after his mother passed away from a brain tumor when he was only five years old. Further into his career, he witnessed the death of a 9 month infant named Janice, from cardiac arrest following extensive burns from accidental scalding. Though he told the grieving parents that she died of septic shock, the sudden nature of death left him questioning the pathophysiology of shock, and whether there could be a neural component to the sequence of events. The second accident was the discovery of an effect in spleen while targeting the brain with a tumour necrosis factor (TNF) blocker, leading to speculation, since confirmed, of a neural pathway from the brain mediating this effect. This serendipitous discovery of the neural pathway, dubbed the ‘inflammatory reflex’ is mediated via a cholinergic inhibition of cytokine synthesis, and is nicely described in this review. In some elegant work, his group demonstrated that this cholinergic effect is mediated via the vagus nerve, and macrophages with express acetylcholine receptors.

Most recently, his group has shown some promising results in 17 patients with severe refractory rheumatoid arthritis in whom they implanted a vagus nerve stimulator and demonstrated improvement in clinical symptoms (though recent experience with renal denervation should give us pause and consider regression to mean before widespread adoption). From a renal perspective, there is data in attenuation of ischemia reperfusion injury in mice, and transplant graft function in rats.

Watch the webcast of Kevin Tracey’s lecture at the ASN conference-cast website here. His TEDMED talk on the same theme is also freely available. And lastly, here is a link to a session discussing how biology and electronics could come together at an Aspen Ideas meeting featuring Dr Tracey with Francis Collins and others. 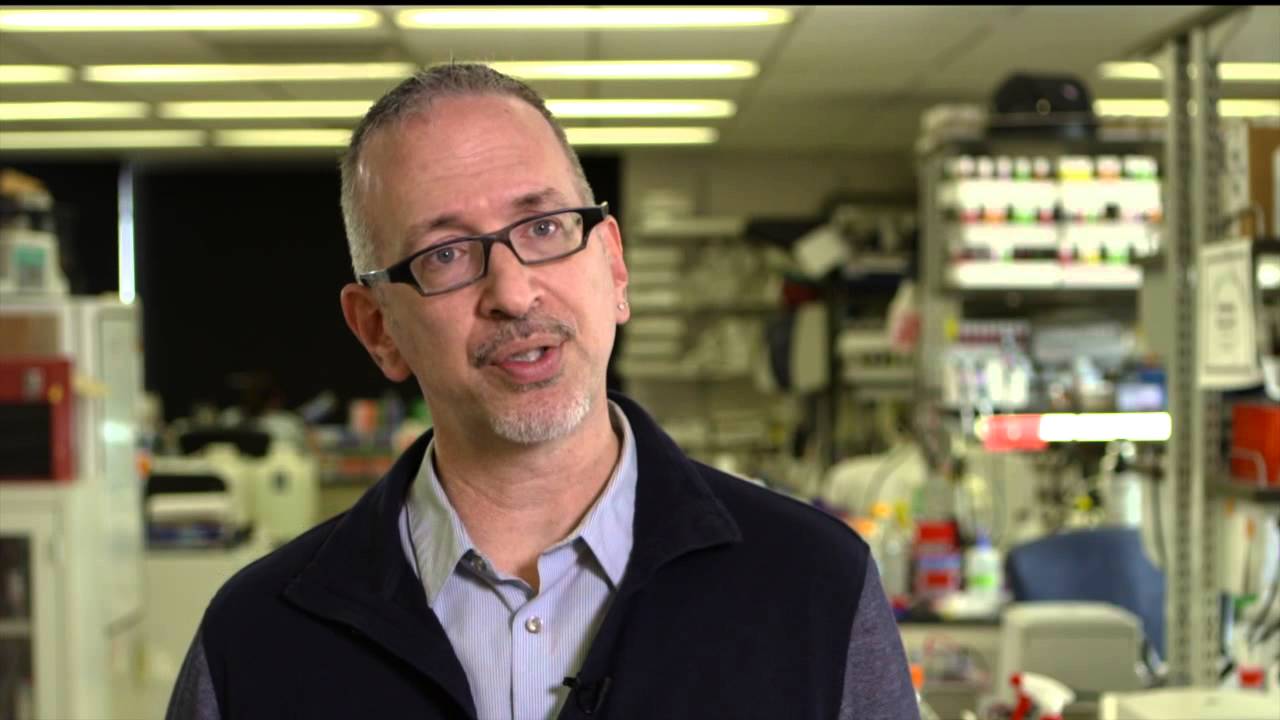 Ross Cagan, aka the ‘fly guy’ as he called himself, is a Professor of Medicine at the Icahn School of Medicine, Mount Sinai Hospital in New York. Growing up, he wanted to be a musician, but somehow ended up in medicine and biomedical research. An early advice he received was to focus on a genetic system that could take advantage of molecular cloning – which is how he landed on the fruit fly (Drosophila). Fruit flies, unlike humans, are easy to breed, with a life cycle of only 9 days, and though adults are picky eaters, the larvae are voracious eaters. Unlike other commonly used animal models (mice, zebrafish, and C. elegans), it is relatively easy to carry out large scale genetic screening, animal drug screening, and create multigenic cancer models, at a cost of about 20 cents per 100 flies per month. Thus, it is easy to give fruit flies diabetes – just feed them sugar (in the form of bananas).

Perhaps the most fascinating aspect of fruit flies is the existence of a ‘nephrocyte,’ which is the equivalent of a nephron, in one cell. Equivalent to the nephrin genes (mutations of which are associated with congenital nephrotic syndrome) are genes named sticks and stones (sns) and hibris (hrs). His work has further demonstrated that these genes are downregulated in states of high sugar intake, which demonstrates a direct linkage (via Knot-sns pathway) to podocyte damage. This work, thus, opens up therapeutic possibilities, where again the advantages of a Drosphila model allows testing of multiple drugs at a fast clip. 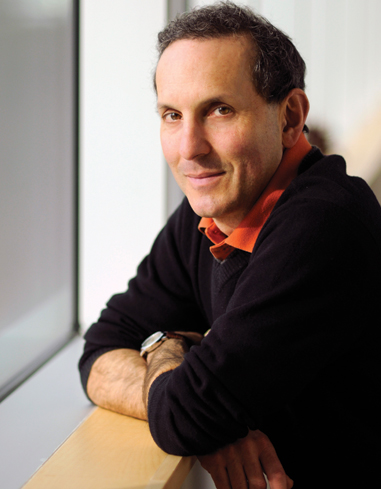 Daniel Drucker is a professor at Mount Sinai Hospital and the Lunenfeld-Tanenbaum Research Institute. He has a Wikipedia page and a Twitter handle, @DanielJDrucker. In addition, his research lab maintains a website aptly named Glucagon.com. His personal foray into research was also somewhat serendipitous. He wanted to work with the thyroid hormone, but was told there were already a few postdocs working in that area – and to go work with glucagon instead. And what a lemonade he has made out of this choice thrust upon him, laying the foundation for an array of therapeutics in diabetes.

The gut is indeed underappreciated as an endocrine organ, and plays an important role especially in glucose metabolism. The ‘incretic effect’ describes the concept that an oral glucose load produces greater insulin secretion than an isoglycemic intravenous glucose infusion. Of the incretin hormones, gastrointestinal peptide (GIP), which stimulates glucagon production, has an opposite effect compared to glucagon-like peptide (GLP-1), which inhibits glucagon production. In addition, GLP-1 inhibits glucose-dependent insulin synthesis, as well as gastric emptying. Endogenous GLP-1 does have a short half-life, and is rapidly cleaved by an enzyme called dipeptidyl peptidase IV (DPP-4). Thus, these discoveries lead to the synthesis of DPP-4 resistant GLP-analogues, such as liraglutide and exenatide. This class of drugs, as Dr Drucker pointed out, is the only class which has shown cardiovascular protection in type 2 diabetes (for SGLT-2 inhibitors, so far this has been shown for only one drug from the class). Indeed, the late breaking trial session the previous day also reported renal outcome benefit with liraglutide from the LEADER trial. In addition, this work also demonstrates the mechanism of action of the DPP-4 antagonists (the –gliptins).

Overall, the daily state of the art lectures were truly state of the art, and kudos should be given to the organizing committee comprising of Roy Zent, Patrick Nachman, and colleagues for arranging such an excellent program.