In a recent issue of AJKD, Moes et al reported the results of a study comparing chlorthalidone and amlodipine for the treatment of hypertension in post transplant patients receiving a tacrolimus-based maintenance immunosuppression regimne. This is the first reported prospective study of thiazide efficacy and safety post kidney transplantation.

Thiazides are poorly studied in the transplant population. This is likely due to reluctance to use this class of drug, particularly early post transplant, given the known side effects of hyperglycemia and hyperuricemia. Tacrolimus is a driver of hypertension through renal vasoconstriction and reduced vasodilation. Tacrolimus has also been shown to drive hypertension in a salt sensitive manner by activation of the sodium chloride cotransporter (NCC). The link between tacrolimus and hypertension has been proven in animal models by demonstrating attenuation of blood pressure in kidney-specific FK506-binding protein knockout mice.

Moes has previously shown that tacrolimus induced a salt sensitive hypertension response in mice that was dependent on NCC by using an NCC knockout model. Given these mechanistic findings, the authors hypothesized that chlorthalidone was a reasonable alternative antihypertensive agent in transplant patients on tacrolimus. The efficacy of amlodipine via smooth muscle relaxation has been well-established in the transplant literature and acts as a control in this study.

This was a single-center, prospective, randomized, crossover, open-label, non-inferiority trial conducted in the Netherlands. Post transplant patients with daytime ambulatory (ABPM) systolic BP over 140 mmHg and with eGFR > 30 ml/min, on tacrolimus, with no anticipated drug or dose changes and no electrolyte abnormalities, were included in this study. 49 patients were randomized and received 8 weeks of each treatment with a 2-week washout period between treatment blocks.

The primary outcome of average daytime SBP reduction by ABPM was not statistically different between drugs. There was a trend towards greater BP reduction with amlodipine (150 ± 12 to 137 ± 12 mmHg for amlodipine and from 151 ± 12 to 141 ± 13 mmHg for chlorthalidone). Interestingly, a carryover effect was noted for chlorthalidone for patients receiving this drug first. This finding may be due to inadequate clearance in the setting of diminished GFR during the  2-week washout period. Chlorthalidone had a greater effect on proteinuria reduction (-65 mg/g, P = 0.04) and urinary calcium excretion (-0.13 mmol/mmol, P  < 0.01) compared to amlodipine, and also reduced edema as assessed by clinical exam. GFR was lower during chlorthalidone treatment compared to amlodipine but this was temporary and recovered after chlorthalidone withdrawal. 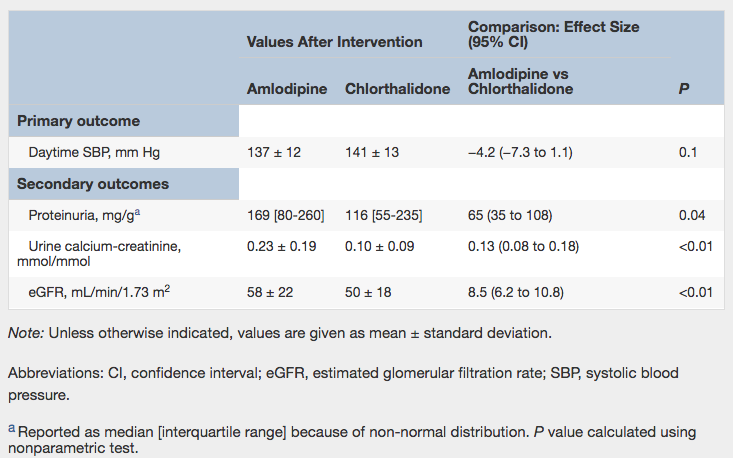 As a downside, hemoglobin A1c and uric acid levels increased significantly in the chlorthalidone treatment group (47 to 50 mmol/mmol and 6.6 to 7.7 mg/dl, respectively, both P  < 0.05). Furthermore, A1c did not return to previous levels on withdrawal of chlorthalidone. Interestingly, amlodipine use was associated with a non-significant increase in tacrolimus trough levels (5.8 to 6.8 ng/L) but had few adverse biochemical effects.

In conclusion, this study by Moes et al neatly demonstrates the efficacy of chlorthalidone as an antihypertensive in transplant patients on tacrolimus, which might be particularly useful in patients unable to tolerate amlodipine or other drugs due to side effects. It is worth nothing that the cohort studied here were all on a steroid withdrawal regimen, thus reducing the concerns for hyperglycemia associated with thiazides. Additional studies are needed to assess long-term outcomes associated with thiazide use, particularly related to hyperglycemia and hyperuricemia.