Randomized controlled trials are the gold standard for establishing the efficacy of any intervention. But what do we do if the exposure is not something that you can give as an intervention (eg smoking)?

Observational studies showing the association of yellow teeth with, say, lung cancer, could be confounded by the fact that smokers have yellow teeth, and is more likely to be the culprit. So how did we find that smoking causes lung cancer? Some very famous people, including the legendary statistician R.A. Fisher (of the Fisher’s exact test, P < 0.05, and much, much more) furiously disputed the connection, and it took extremely meticulous work from Richard Doll and Austin Bradford-Hill to make the connection.

Bradford-Hill went on to expand on the causation conundrum with 9 criteria, which he recommended should be fulfilled to connect an exposure to an outcome. Though we often only fixate on the P value while reviewing fresh epidemiological data, that is but one of these 9 criteria. Others include plausibility, coherence, a biological gradient, consistency, and temporality.

What if the exposure doesn’t happen in our walking life, but in utero? Perhaps the fault lies not in our environment, but in our genes?

Gregor Mendel is known for being the fastidious monk who experimented on peas, but one is more likely to hear his name recently in the portmanteau-ish term of ‘Mendelian randomization.’ Using data from the Global Lipids Genetic Consortium, Lanktree and colleagues use this technique to examine the link between different cholesterol subtypes and chronic kidney disease (CKD).

Mendelian randomization analysis uses the natural variation as a ‘randomization’ and explores the links between genetic variants, their effects, and their association with outcomes (see this helpful 2-minute video for a primer). An example is the gene ALDH2, for alcohol dehydrogenase. Variants of this gene are associated with higher alcohol intake. Mendelian randomization analyses help entangle the effect of higher alcohol intake and higher blood pressure, resolving the confounding from the other predictors of alcohol intake. Firstly, systolic blood pressure was 7.44 mmHg greater among *1*1 (surrogate for heavy drinkers) than among *2*2 homozygotes, and 4.24 mmHg greater among heterozygotes (surrogate for moderate drinkers) than among *2*2 homozygotes. Secondly, no such effect was seen among non-drinkers, thus completing the causation circle. These studies are still subject to some biases, such as contemplation of time zero (theoretically at the time of conception, but in reality measured when tissue sample is collected for genetic determination), amongst others.

The story of high density cholesterol (HDL-C) and clinical outcomes, especially cardiovascular (CV) outcomes, is very interesting. Firstly, observational studies consistently report a strong association between lower HDL-C and poor CV outcomes. As a result, significant scientific and pharmaceutical acumen were assembled to design drugs to increase HDL-C, and presumably reduce CV events. But the randomized trials were uniformly negative, and despite the results of the last trial which showed a faint glimmer of an effect, the pharmaceutical industry has decided to wash their hands off this class of drugs.

This leaves us wondering whether the observational studies were wrong after all, and perhaps low HDL-C just is a marker of the metabolic syndrome? Indeed, a Mendelian randomization study 4 years ago showed that certain genetic variants that resulted in increased HDL-C have no association with better CV outcomes.

What about HDL-C and renal outcomes? Again, a large observational study reported an association of low HDL-C with incident CKD. However, at least one of the HDL-C-raising CV trials did not show any impact of raising HDL-C on renal outcomes. Could this be déjà vu?

In the present study, Lanktree et al suggest otherwise. Their study comprises data from 60 studies with information from up to 133,814 participants. In the conventional Mendelian randomization analysis with a 122 HDL-C genetic variant instrument, they report that a 17 mg/dL genetically higher HDL-C was associated with a 0.8% higher eGFR and an odds ratio of 0.85 for incident CKD. This result was robust across a multivariable analysis, as well as other sensitivity analyses (eg to determine presence of net pleiotropy). 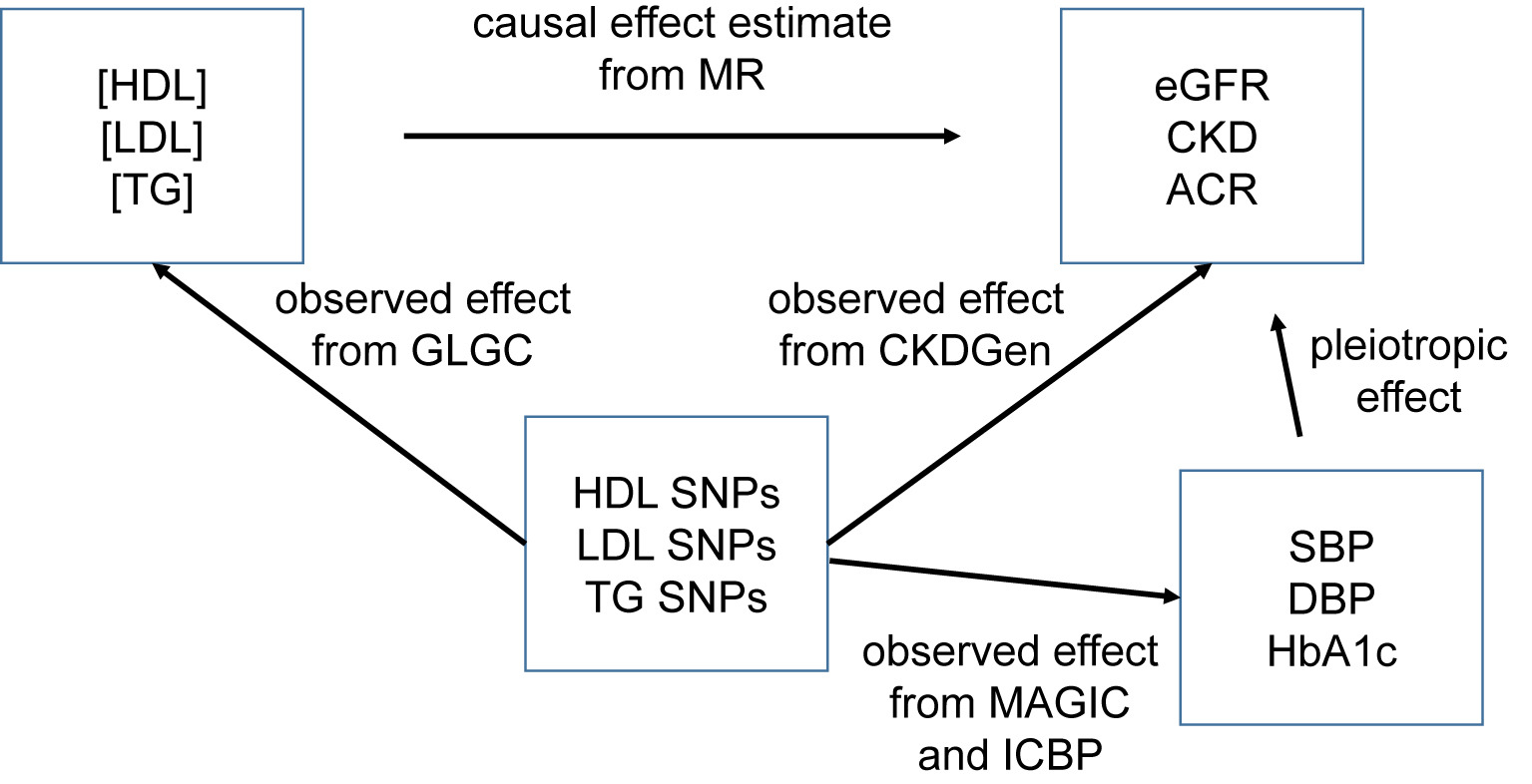 Diagram of Mendelian randomization (MR) structure. An assumption of the design is minimal pleiotropy resulting from genetic effects on alternative pathways that result in a change in the outcome of interest. In multivariable MR, the authors attempt to account for pleiotropic bias by correcting the outcome based on observed genetic effects on alternative pathways. Figure 1 from Lanktree et al, AJKD © National Kidney Foundation.

These results are in some contrast to a previous analysis, which reported a non-significant effect, but was based on 68 variants versus 122 in the present study. Do these results imply that HDL-C raising agents should be rigorously tested as nephroprotective agents? A physiologic explanation for these effects would help provide more confidence in the next steps.

Cholesterol metabolism in CKD is somewhat complicated, and does not necessarily have the same framework as in non-CKD populations. A review in AJKD, and a related blog post, discussed this changed cholesterol metabolism in CKD. But in fact, as the authors point out, perhaps this implies that the effect of cholesterol on glomerular microcirculation may not parallel the effects on coronary and other vascular beds. At the very least, these conclusions seem like a promising avenue for further research.