Hematoxylin and Eosin (H&E) is the fundamental stain of histopathology. In contrast to neoplastic pathology, which centers on the hematoxylin stained nucleus, much of nephropathology’s attention focuses on cytoplasm and extracellular components, all of which are eosin positive. Nephropathology is therefore unusually dependent on “special” stains that enable discrimination between the various eosin positive components. For example, all components of the glomerular capillary wall (podocyte and endothelial cytoplasm, basement membrane and immune deposits, if present) stain with eosin. Accurate evaluation of the membrane therefore requires stains (PAS and Jones silver technique) that specifically stain that structure.

The PAS (Periodic Acid-Schiff Reaction) reaction stains carbohydrates, forming a purple/red/magenta end product. In addition to basement membranes (of all structures), it highlights mesangial matrix due to the abundant carbohydrate complexes associated with Type IV collagen. Cytoplasm is only weakly stained. Both PAS and Jones are considered “matrix stains” that highlight similar structures, albeit with nuances and differences that are learned with experience. They are the stains of choice for evaluating glomerular architecture and GBM thickness. Notably, most immune complexes are PAS negative.

There are three processes that can result in the glomerular capillary wall appearing thickened on H&E. One of these three is membranous glomerulonephritis (GN). In this entity, immune complexes diffusely deposit in the subepithelial space (between the glomerular basement membrane and the podocyte). Initially, these deposits are seen by electron microscopy to be sitting along a relatively normal basement membrane. At this early stage, the capillary wall will appear of normal thickness by light microscopy. With time, the deposits invoke a reaction resulting in the formation of additional membrane material that first grows up between the deposits (“spikes”) and then extends on top of and surrounding the deposits (“holes”). These stages will result in membrane thickening that can be appreciated by light microscopy.

Examine the figure below, which shows the same glomerulus with chronic membranous GN, stained with both H&E (A) and PAS (B). Note the relative thickness of the membranes. Why does the capillary wall appear much thinner on the PAS stained section than on the H&E? 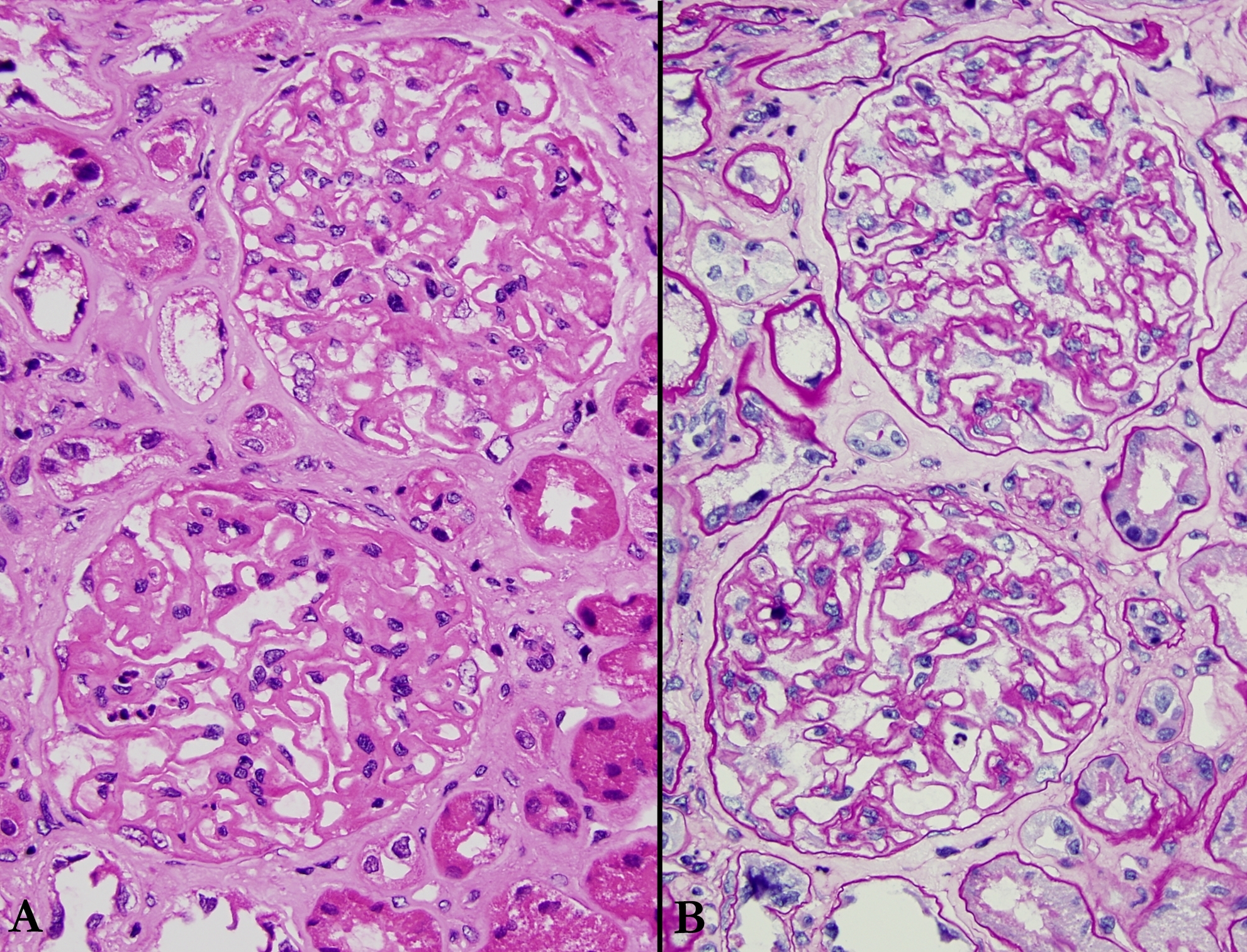 The explanation lies in the two stains differing characteristics. As noted above, of the four components of the glomerular capillary wall, PAS stains only the basement membrane. In contrast, Eosin stains all four of the components, and in this case particularly, stains the immune complexes which are thickening the capillary wall. No wonder the wall appears much thicker on H&E!

Now take a closer look at the PAS image again (click on the image to enlarge). Follow the outer contours of the capillary walls and you will see “spikes.” This is the result of the fact that the deposits between the “spikes” are PAS negative. No such “spikes” can be seen by H&E, because both the deposits and the membranes stain with Eosin. The Jones silver technique is a better way of identifying both “spikes” and “holes.” Perhaps we will study it next!