Atypical hemolytic uremic syndrome (aHUS), often with pathogenic mutations in complement regulatory genes, has traditionally been associated with poor renal transplant survival due to a high risk of recurrence. The introduction of the terminal complement inhibitor, eculizumab, has revolutionized care of patients with aHUS, including prevention and management of posttransplantation recurrence.

The decision to use eculizumab prophylactically or wait for recurrence posttransplantation may be a difficult one. Mutation in particular genes, such as complement Factor H (CFH), or those with a previous recurrence, may be deemed high-risk. However, many patients carry no detectable complement gene variants so their risk is difficult to assess. Transplantation itself carries many potential risk triggers for recurrence of aHUS given the broad exposure to many endothelial insults. These include calcineurin inhibitors (CNI), acute rejection, viral infection, and ischemia, which may release many complement products at reperfusion. The extraordinary cost of the drug and the recommendations to use it lifelong post-transplantation add to difficulties in making these decisions.

In a recent AJKD study, Duineveld et al employed a strategy of living donation with low dose CNI and strict blood pressure control without prophylactic eculizumab in patients with aHUS. Seventeen patients are described (12 female), including five patients who had previously lost an allograft due to aHUS recurrence and all but one having a pathogenic or likely pathogenic variant in a complement regulatory gene. The variants were located in the CFH or C3 genes, with one additional case having a combined complement Factor I (CFI) and membrane cofactor protein (MCP) pathogenic variant. Most of the transplants were living unrelated (n=14), with the 3 living related donor having normal complement genetic screens. The immunosuppression protocol involved basiliximab induction, mycophenolate mofetil, and tacrolimus (with target levels of 4-5 ng/ml for 1 month and 5-7 ng/ml thereafter) without pre-treatment plasmapheresis. One patient, with a likely pathogenic variant in CFH, experienced a biopsy-proven recurrence at 2 months and was treated with eculizumab. The drug was stopped 3 months later with an immediate mild relapse necessitating reinstatement of eculizumab, which was again discontinued, apparently successfully, 6 months later. The other patients have not developed recurrent aHUS after a median follow-up of 25 months (range 7-68). 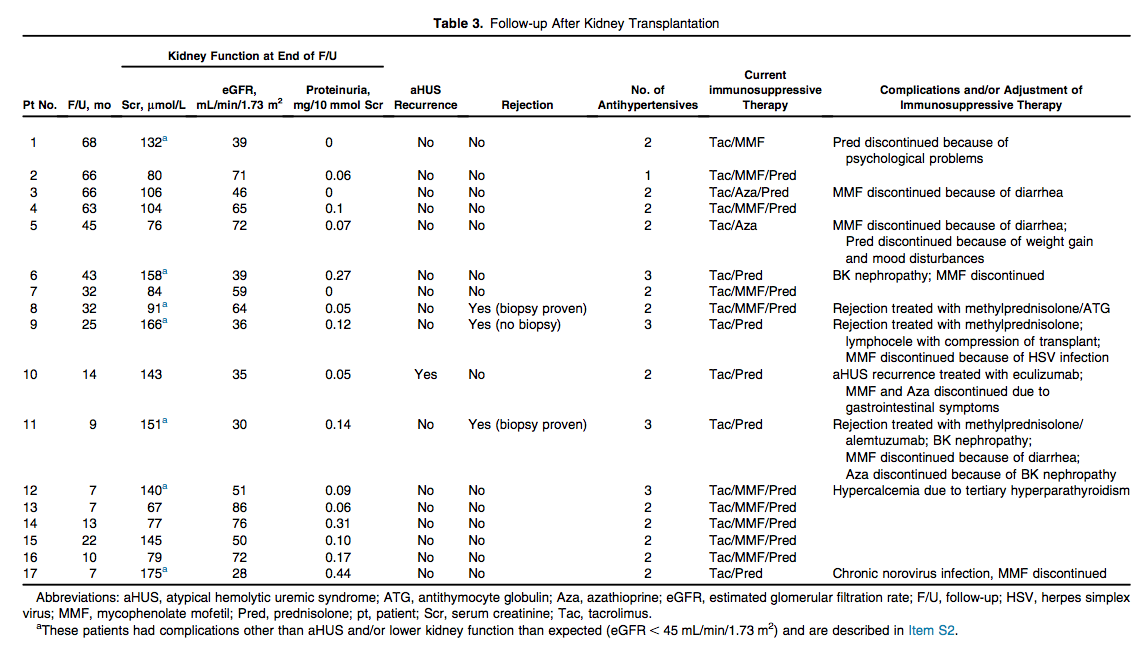 The report demonstrates that in a high-risk group for aHUS recurrence, an individualized transplantation regime involving fastidious follow-up and without prophylactic eculizumab may yield excellent medium-term results. The authors should be commended on what I consider to be a somewhat brave study, given the high-risk nature of the patients.

As we are responsible for using drugs like eculizumab thoughtfully, Duineveld et al is a helpful piece of work to the wider transplantation community who deal with these patients regularly, albeit infrequently. Hopefully, larger cohorts with detailed sequencing and longer follow-up will provide clinicians with more confidence to individualize treatment in patients with aHUS undergoing transplantation. Using this approach rather than a preemptive blanket treatment protocol in many such patients will afford great savings in resources. The arrival of eculizumab has opened up kidney-alone transplantation as a good option for patients with high-risk of recurrence aHUS, even if the drug itself may not always be necessary.