Tacrolimus was first discovered by scientists of the Fujisawa Pharmaceutical Company in a soil sample taken from the foot of Mount Tsukuba in Tokyo. Originally called FR000506 and later FK-506, the drug was isolated from the fermentation broth of Streptomyces tsukubaenis. These findings were later published by Kino and colleagues in 1987. A macrolide antibiotic and novel immunosuppressive agent, tacrolimus (“Tsukuba macrolide immunosuppressant”) was found to inhibit T-lymphocyte activation with a mechanism of action similar to that of the calcineurin inhibitor cyclosporine but with higher potency. By the early 1990s, tacrolimus had gained approval for use in solid organ transplantation in Japan, the United States, and the United Kingdom, among others. Over the last 25 years, it has become the cornerstone of maintenance immunosuppression for solid organ transplantation around the world.

Currently, there are three tacrolimus formulations available in the market:

Management of patients on tacrolimus is complex and is, in part, related to the drug’s narrow therapeutic window and its metabolism by the cytochrome p450 (CYP) 3A4 and 3A5 enzyme systems found in the liver and gut. Genetic variation in CYP3A5, which results in CYP3A5 expression or nonexpression, causes significant pharmacokinetic variability among patients.

The table below summarizes CYP3A5 genotypes and corresponding phenotypes:

The paucity of data on the pharmacogenetic effect of CYP3A5 expression on tacrolimus in African Americans leads us to ask the following questions:

In a recent study published in AJKD, Trofe-Clark et al (Open Access) published the results of ASERTAA (A Study of Extended Release Tacrolimus in African Americans), which investigated whether gene expression of CYP3A5 in African American kidney transplant recipients had an effect on the pharmacokinetics of immediate-release tacrolimus (IR-Tac) and extended-release tacrolimus (LifeCycle Pharma Tac [LCPT]).

Fifty kidney transplant recipients of African ancestry with stable allograft function and therapeutic tacrolimus concentrations on IR-Tac-based maintenance immunosuppression participated in an open-label, randomized, prospective crossover study at 3 centers. Study participants were classified as CYP3A5 expressers if they had at least one CYP3A5*1 allele, and were nonexpressers if they had two variant loss-of-function CYP3A5 alleles (CYP3A5*3, *6, or *7).

Patients were administered IR-Tac and LCPT in a crossover fashion as shown in the figure below. 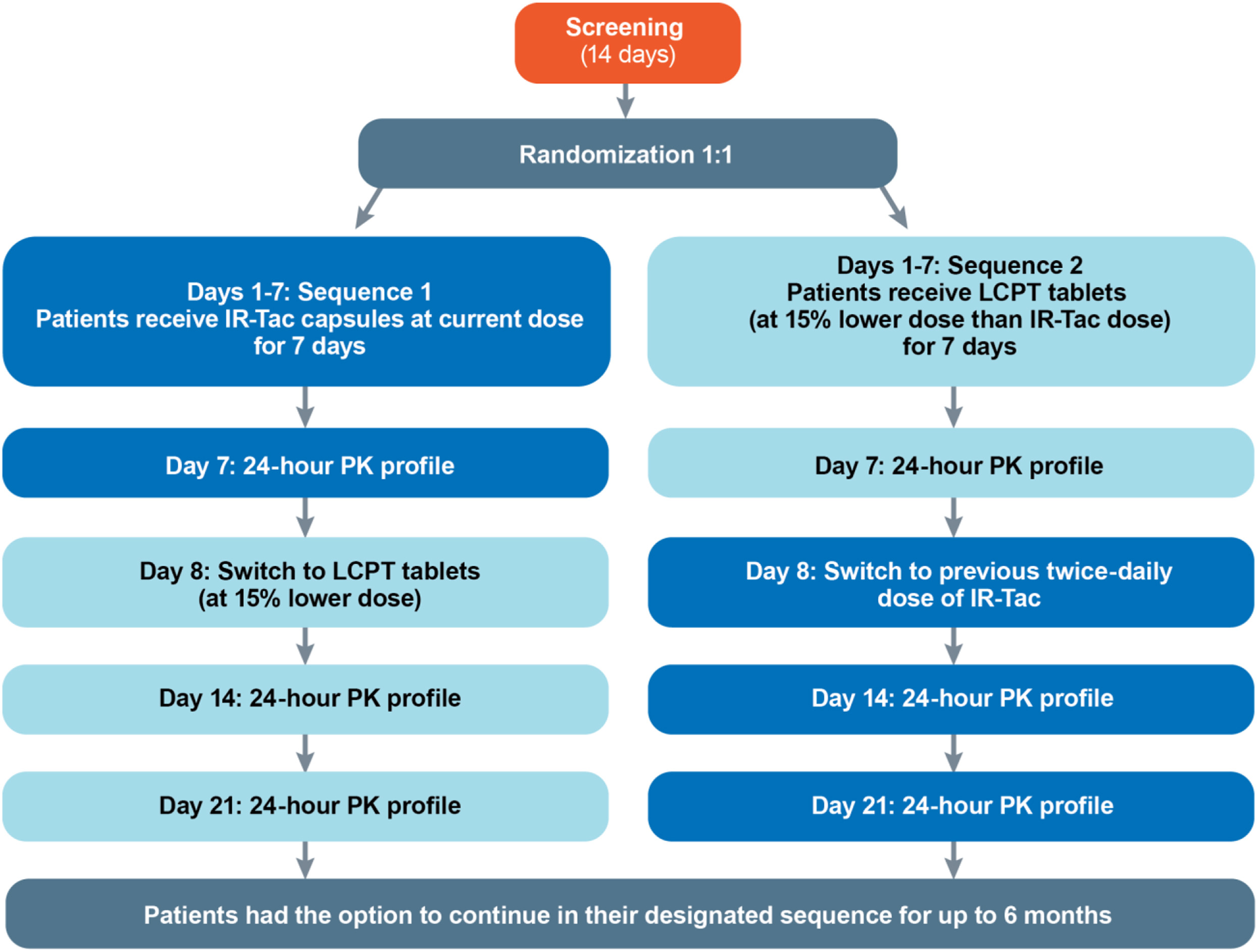 The prescribed LCPT dose was 85% of the IR-Tac daily dose. Pharmacokinetic profiling included measurements of the following:

Forty-six patients completed the pharmacokinetics study of three 24-hours assessments, of which 35 (76%) patients were CYP3A5 expressers and 11 (24%) were nonexpressers. Not surprisingly, the study found that patients overall on IR-Tac had higher Cmax (by approximately 30%) and shorter Tmax compared to patients on LCPT (1.1 versus 5 hours). This is nicely depicted in the figure below. Bioavailability of LCPT was 32% higher than IR-Tac. 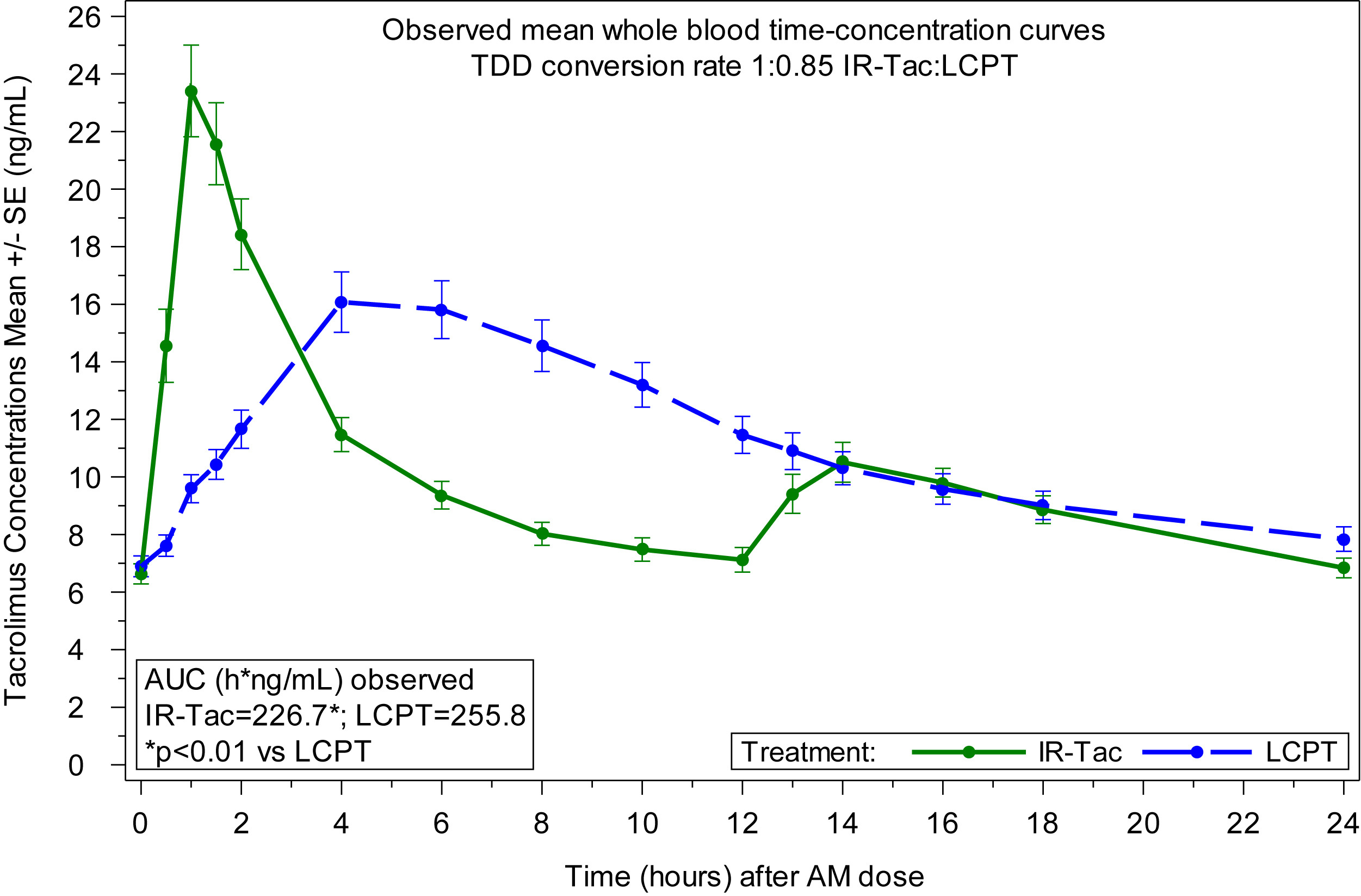 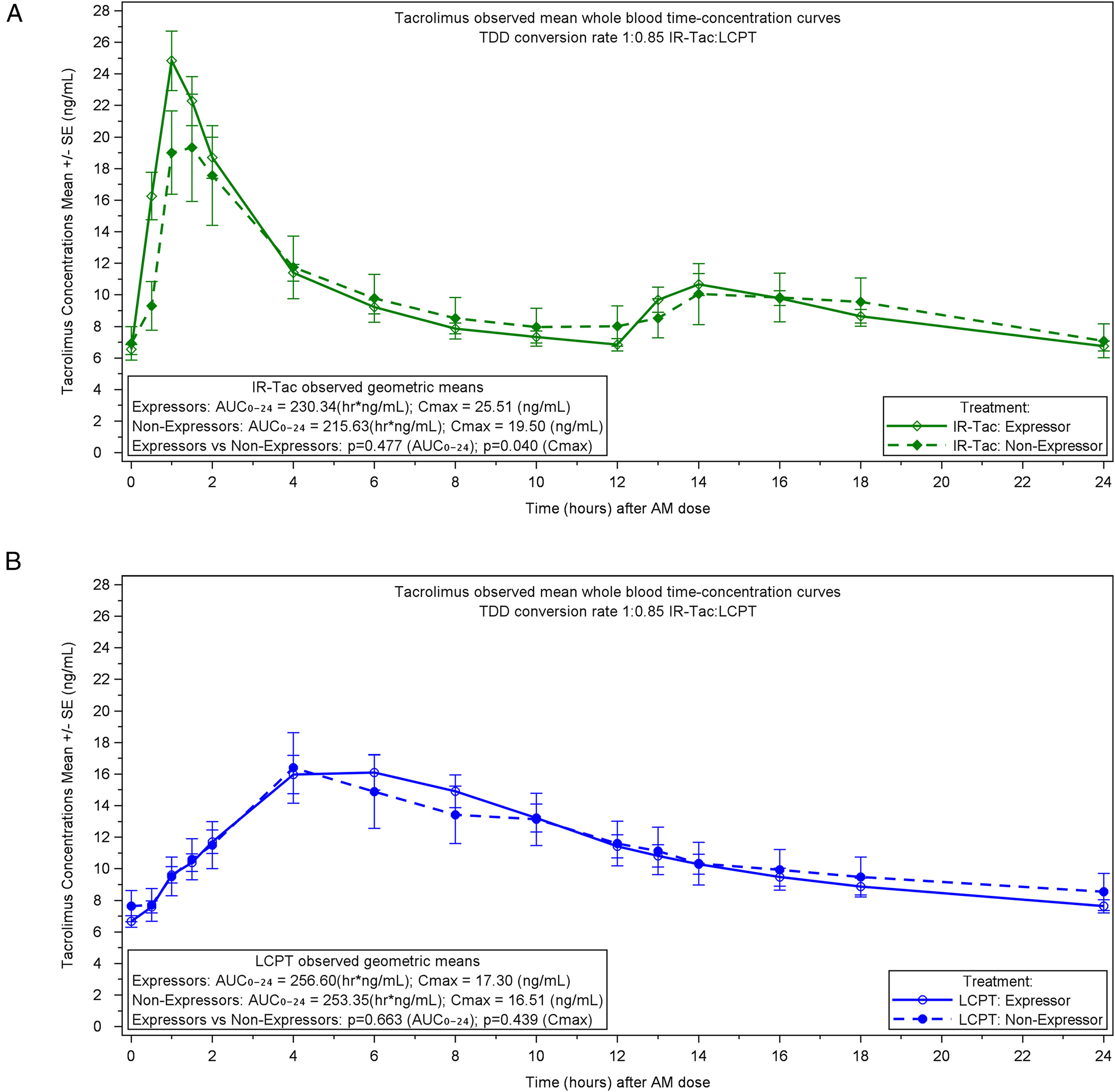 With LCPT dosing at 85% of the total daily dose of IR-Tac, there was higher drug exposure for LCPT as measured by the Cmin and AUC. This suggests that lower doses of LCPT are required, perhaps a 20-30% reduction in dose instead of the prescribed 15% in the study.

Trofe-Clark et al concluded that achieving therapeutic trough concentrations in most African Americans with IR-Tac resulted in higher peak concentrations. They found that the pharmacogenetic effect was reduced with LCPT and hypothesized that this was due to its delayed absorption profile.

Overall, this was a small but well-done study that demonstrated a significant difference in peak drug concentration between CYP3A5 expressers and nonexpressers in African American patients receiving IR-Tac but not LCPT. There was also a higher dose requirement for IR-Tac compared to LCPT to achieve the same drug exposure. How are these pharmacokinetic differences clinically relevant? As noted by the authors in their discussion, a few studies have shown that both higher Cmax and higher dose requirements correlate with worse renal function and calcineurin inhibitor toxicity.

The pharmacokinetic profile of LCPT as depicted in this study makes it tempting to use as the drug of choice in clinical practice given its potential to decrease toxicity and adverse outcomes. However, before advocating its widespread use among African Americans, the nephrology community would like to see more robust clinical evidence demonstrating LCPT’s cost-effectiveness and superiority over IR-Tac on important endpoints such as graft survival.

Interestingly, a randomized controlled trial of 240 patients conducted in a predominantly white population in the Netherlands failed to show a difference in outcomes between patients who received genotype-based versus weight-based tacrolimus dosing. It would be intriguing to see whether a similar study would have discordant findings if conducted in an African American population where pharmacogenetics seems to play a more important role.

In conclusion, ASERTAA is a welcome addition to our understanding of the pharmacogenetic effects of CYP3A5 expression on tacrolimus pharmacokinetics. This study is important and impactful in that it was conducted in African American patients in whom pharmacokinetic data is sparse despite the known pharmacogenetic difference between African American and white patients. Recognition of genetic variations and its implications on tacrolimus pharmacokinetics is an important first step in optimizing and individualizing immunosuppression, particularly in African American kidney transplant recipients. It remains to be seen whether this will ultimately lead to an improvement in clinically meaningful outcomes in this patient population.