A recent article published in AJKD by Graham and Courtney describes a quality improvement project in Belfast City Hospital to facilitate living kidney donation. Prior to 2010, this center had low rates of living kidney kidney transplantations, 4.3 per million population (pmp) per annum, with a lengthy donor workup. The center then embarked on implementation of a one-day donor assessment model.

Following the potential donor making contact, a one-page health questionnaire was completed; if no contraindications were evident, the donor proceeded to further investigations. With buy-in from the health system, radiology department, and the multi-disciplinary team (MDT), Belfast City Hospital instigated a nephrology-led program including all necessary tests, imaging, and consultations in one hospital visit. The imaging studies were done towards the end of the day after all laboratory and consultations and final approval of a nephrologist; therefore, unnecessary radiation exposure was largely avoided. A MDT meeting in the weeks following the assessment decided if donation could go ahead and if so, a transplant surgical review and independent assessment (UK prerequisite to ensure no coercion) was organized before a date was set for donation. 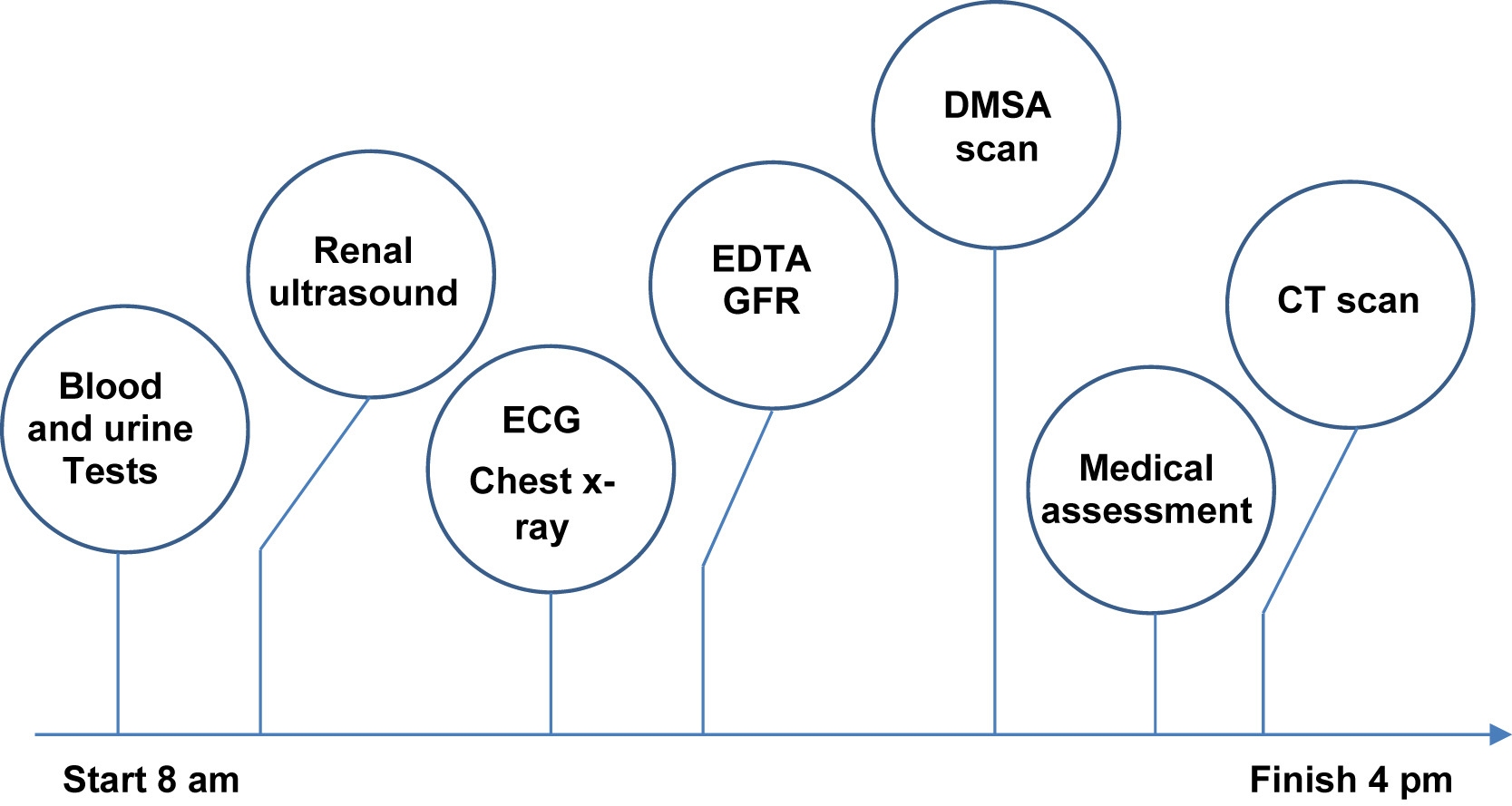 By the end of 2016, 431 donors completed the one-day assessment, with (66%) of those donating. The reasons for not proceeding were standard and only a small number of potential donors (n=18) withdrew from the process for non-medical reasons. The report described patient experience, which included very positive feedback with the new, streamlined pathway.

Strikingly, there was also a large and sustained rise in living kidney donation at their center since this process was started: rates increased from <5 pmp to almost 33 pmp in 2015 and the authors quote their rate in 2016 to be 40 pmp/year. By 2015, a total of 58% of kidney transplantations at this center were from living donors. 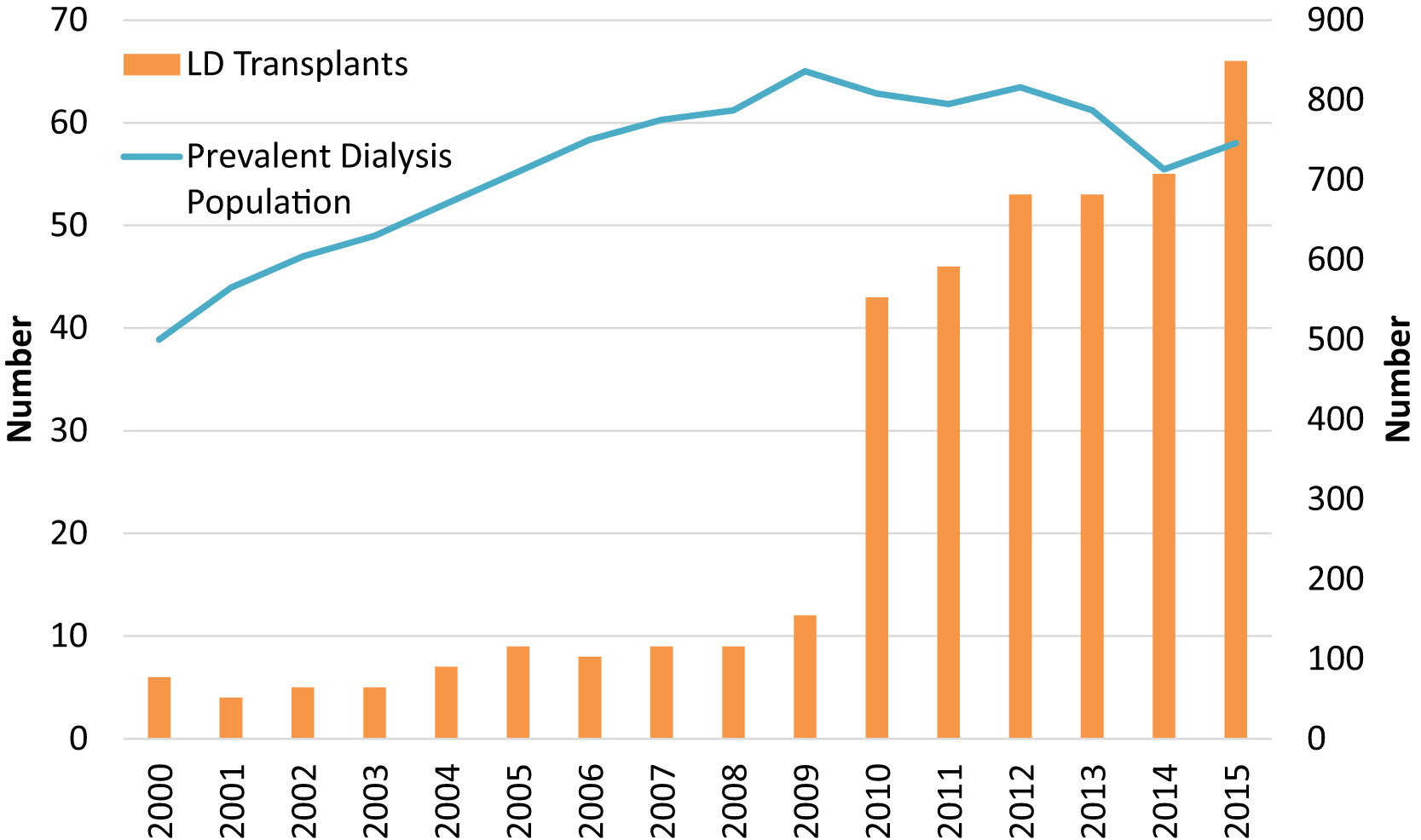 Living donor (LD) transplantation rates and prevalent dialysis population in Northern Ireland. Since initation of the 1-day assessment quality improvement project in 2010, there has been a significant and sustained improvement in living donor transplantation rates from 4.3 per million population (pmp) per annum (pa) in 2000 to 2009 to 32.6 pmp pa in 2011 to 2015. This has contributed toward a decrease in the prevalent dialysis population during the same period. Figure 2 from Graham and Courtney, AJKD © National Kidney Foundation.

Graham and Courtney also demonstrated that this explosion in living donor transplantation has coincided with a leveling-off, and likely decrease, in incident dialysis patients in the region. While causality cannot be attributed to the increase in living donor transplantation, it seemed a very likely contributor. Some additional factors leading to the high living donor rates were mentioned, including increasing use of the National Kidney Sharing Scheme (UK paired exchange scheme) and commencement of ABO & HLA-incompatible transplantations at the center; however, the major factor was considered to be the one-stop shop assessment day.

Northern Ireland is now a world-leading region for living donor transplantation with rates significantly higher than other parts of the UK as well as the Republic of Ireland, a country with very similar demographics and cultural background.

As a transplant nephrologist practicing in Scotland, I have long been aware of the success of the program in Belfast and am delighted that their experience is being shared with a wider audience. While the center in Northern Ireland has some specific features facilitating this type of endeavor (single center providing transplantation services in a small, close-knit, homogenous population), there is no reason to think that similar success could not be achieved elsewhere. The favorable comparisons to other countries of the UK & Ireland demonstrate this.

It would have been interesting to see if the time taken for donor workup had decreased with the implementation of the project or if the increasing number of assessments had hampered this over the years. Moreover, I can imagine the one-day assessment being a frantic day of getting tests performed and reported before the afternoon consultation and decision to proceed to the CT scan. This pathway requires the wider hospital infrastructure to facilitate the process, which is clearly happening in Belfast. The transplantation community needs to learn from the success in Northern Ireland and consider implementing such patient-centric models around the world.