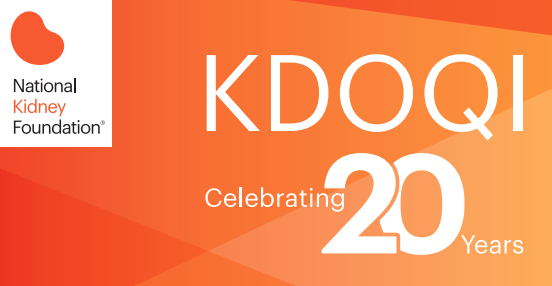 The National Kidney Foundation (NKF) originated from the Committee for Nephrosis Research, which held its first meeting on November 15, 1950. Gradually, this Committee morphed into the National Nephrosis Foundation due to the leadership of Ada and Harry Debold, parents who suffered the loss of their 4-year-old child from nephrosis. In 1964, this Foundation was named the National Kidney Foundation. While many things have changed since the Committee for Nephrosis Research first met in 1950, the overall mission of the NKF, to improve the lives of individuals with kidney disease and their families, has remained consistent over the past 67 years.

KDOQI emerged from the Dialysis Outcomes Quality Initiative (DOQI), which was created in 1995. Supported by an educational grant from Amgen, Inc., DOQI was the very first group to develop clinical practice guidelines for dialysis patients and health care providers. Such recommendations for clinical care were extremely important because end-stage renal disease (ESRD) incidence was increasing at an alarming rate during the 1990s and no previous group had extensively examined the existing data to determine best practices to care for patients with this devastating disease. The primary goal of DOQI was to produce evidence-based guidelines and/or recommendations on the twelve aspects of chronic kidney disease (CKD) care most likely to improve patient outcomes. 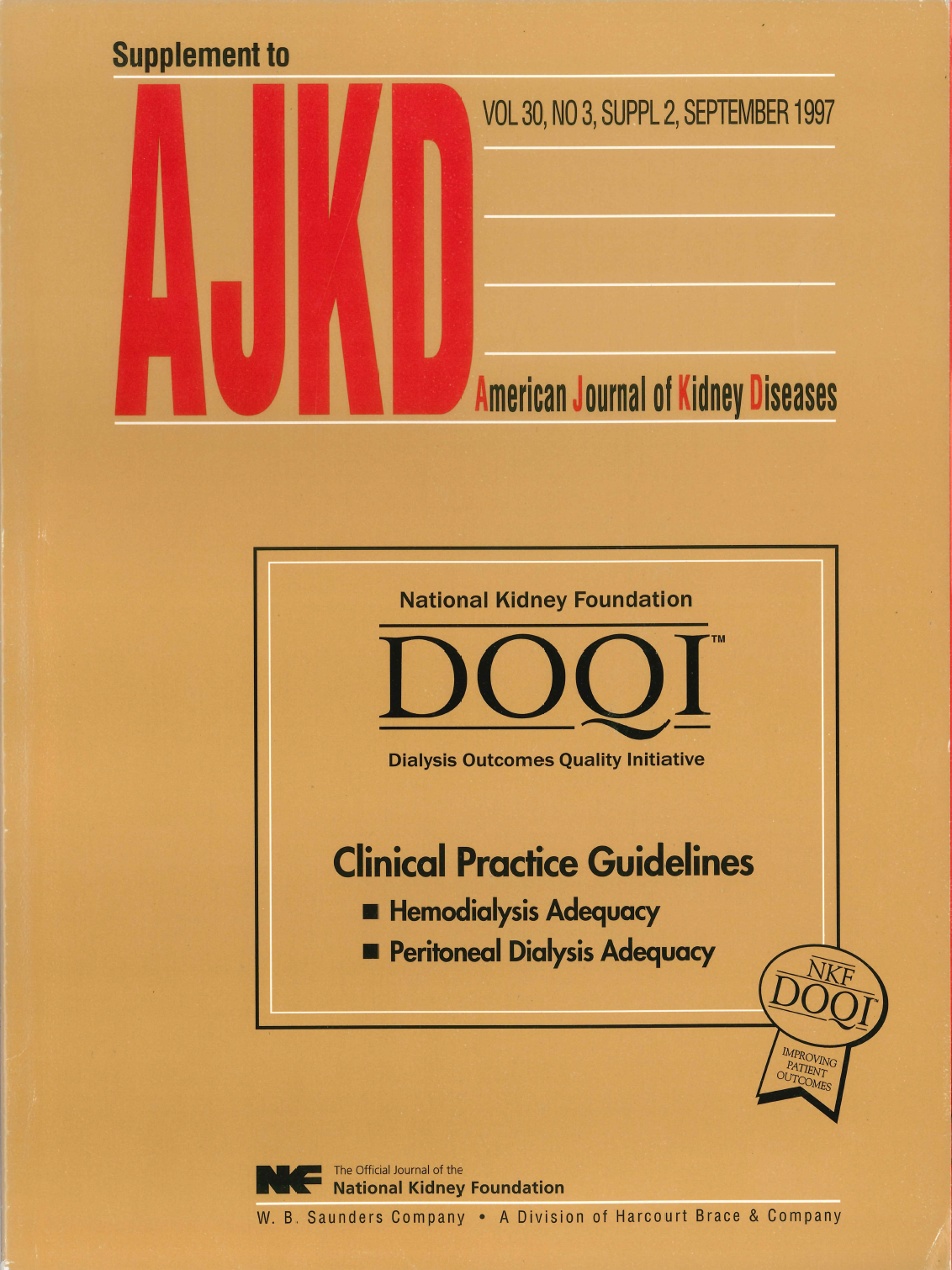 In 1997, the first guidelines on Hemodialysis and Peritoneal Dialysis Adequacy and Vascular Access were published, along with the DOQI Clinical Practice Guidelines Recommendations for Anemia in CKD. These first set of guidelines established the importance of measuring the dose of dialysis in all long-term dialysis patients.

Several guidelines and updates which direct clinicians to best practices for dialysis preparation and care have subsequently been published; the 30% decline in the mortality rate among patients with ESRD in the United States may in part be attributed to these guidelines. For example, the original Vascular Access  guideline highlighted the benefits of early placement of an arteriovenous fistula (AVF) to reduce the increased mortality and complications associated with grafts and tunneled catheters. This guideline has been adopted by many organizations in order to increase the use of fistulas and promote maintenance of vascular access integrity, leading to increased dialysis adequacy.

The guidelines produced by the NKF DOQI group no longer focus solely on dialysis issues because in 1999, the NKF Board of Directors approved a proposal to enlarge the clinical practice guideline initiative and encompass the entire spectrum of kidney disease. To reflect these expanded goals, the reference to “dialysis” in DOQI was changed to “disease,” and the new initiative was termed Kidney Disease Outcomes Quality Initiative (KDOQITM).

During the 20th century, standards for defining kidney disease did not exist.  The most commonly used method to estimate glomerular filtration rate (GFR) was the Cockroft-Gault formula which was first developed in 1976. In 1999, the Modification of Diet in Renal Disease (MDRD) Study Group developed a GFR prediction formula, which paved the road for the publication of the KDOQI Guideline on Chronic Kidney Disease: Evaluation, Classification, and Stratification in 2002. The CKD staging system operationalized the natural history of kidney disease with both early (CKD stages 1-2) and late (CKD stage 5) stages of kidney disease or kidney failure. This staging system also standardized the definition of kidney disease, facilitating communication between government stakeholders, public health officials, the lay public, and healthcare workers. In 2005, CKD stages defined by the KDOQI guidelines were included in the International Classification of Disease, Ninth Revision Clinical Modification (585.1-585.5). The CKD staging system continues to be used in clinical practice today.

Due to the development of the CKD staging system, population estimates of CKD stages can now be assessed. The U.S. Office of Disease Prevention and Health Promotion establishes goals to improve the health of the nation through its Healthy People initiative. The NKF-CKD classification system is used as the benchmark to define goals to improve outcomes across all stages of CKD. In the past, CKD burden was largely measured by the number of adults receiving dialysis.

The KDOQI guidelines for the classification and staging of CKD have also greatly increased public awareness of kidney disease. For example, the burden of kidney disease is now recognized by the Healthy People 2020 Objectives developed by the Department of Health and Human Services, the Centers for Disease Control and Prevention, and the National Center for Health Statistics.

Futhermore, the guideline recommendations for CKD identification led to widespread laboratory reporting of estimated GFR (eGFR) in order to facilitate the early identification of CKD and to prevent its progression both in nephrology and primary care. Globally, eGFR is now used as the standard clinical measurement to assess kidney function and diagnose CKD.

Subsequent guidelines for management of kidney disease have included the Clinical Practice Guidelines and Clinical Recommendations for Bone Metabolism in Adults, published in 2003, and Bone Metabolism in Children, published in 2005. The K/DOQI Nutrition and Chronic Renal Failure guidelines published in 2000 were updated with the publication of the KDOQI Clinical Practice Guideline for Nutrition in Children in 2008. These guidelines assist pediatric healthcare workers to management protein-energy malnutrition which influences linear and cognitive growth and sexual development.

The long-term goal of KDOQI is to communicate best clinical practices for the identification and management of all stages of CKD. KDOQI has achieved substantial success over the past twenty years and will continue to pave the way to better prevention, better and earlier diagnosis, and better management of all kidney diseases. Happy Anniversary, KDOQI!