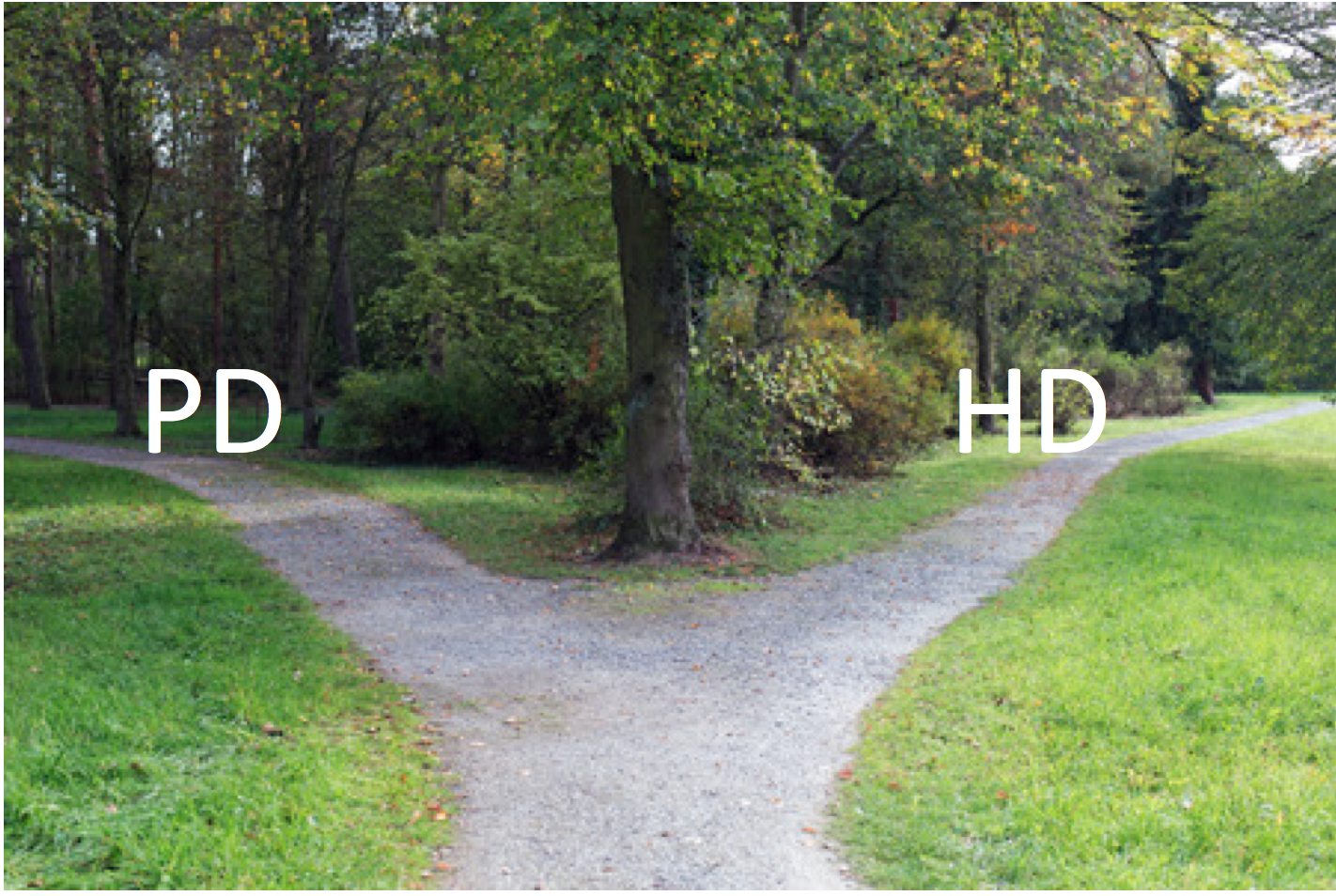 “Two roads diverged in a wood

I took the one less travelled by

And that has made all the difference”

In the world of end-stage renal disease (ESRD), the road less travelled is peritoneal dialysis. But does either road make a difference? While both hemodialysis (HD) and peritoneal dialysis (PD) are widely accepted and utilized methods of renal replacement therapy (RRT), they differ in so many ways that wouldn’t we expect an outcome benefit other than lifestyle? HD is efficient but harshly intermittent (~12 hours/week) while PD is inefficient but gently continuous (168 hours/week in continuous ambulatory PD). As a result, uremic toxins and fluid balance vary markedly over the course of the week in patients maintained on HD, while they are in relative steady state in those receiving PD. HD removes fluid using hydrostatic pressure while PD uses osmotic and oncotic pressure to achieve that goal. The HD membrane is synthetic while in PD it is biologic. The preservation of residual renal function differs markedly between therapies. There are unique complications of both therapies that are related to the dialytic mechanism itself, eg peritonitis and weight gain with PD or access and blood infections with HD.

A patient’s choice of RRT is usually not based on these medical concerns, but on a lifestyle decision as the two modalities are usually presented as medically equal. This choice can have a major impact on quality of life as HD is typically done in an outpatient center while PD is a home-based therapy. For some patients, “There’s no place like home,” while for others, the thought of dialyzing “24/7” is just too daunting to even consider. For the sake of this commentary, renal transplantation as the preferred RRT option for most patients, as well as home HD, will not be discussed.

Both PD and HD have the ultimate goal of cleansing the blood of toxins, normalizing blood electrolyte concentrations, and removing extracellular volume. They both do this reasonably well. But because these RRT therapies are so different, does this translate into disparities that impact patient outcomes, specifically mortality? Can we as physicians tell our patients that either road is fine? These are questions that have been asked since both therapies became more available in the 1970s.

Before we look at the data comparing HD and PD patient survival, let’s consider some of the factors known to affect ESRD morbidity and mortality in general.

The problem with comparing PD to HD is that there is a major selection bias in RRT choice, the confounding of which is essentially impossible to overcome as a patient’s choice of modality is not random. PD patients tend to be younger, more likely to be employed, and more independent. However, many patients are just not considered “candidates” for PD for a number of medical and social reasons, while that is rarely the case for HD. The one study that attempted to randomize new ESRD patients to either PD or HD failed as patient preference prevented the study from meeting recruitment goals.

Attempts at retrospectively comparing mortality between PD and HD have reported variable results. When a comparison was made in 2004 using registry data, younger patients and those without diabetes or congestive heart failure (CHF) appear to benefit from PD; however, this effect was more apparent in the first 2 years, and older patients with diabetes or CHF do not fare as well on PD. In 2010, an analysis of 6,337 paired patients from a retrospective cohort of 98,875 adults who initiated dialysis in 2003 found that the overall intention to treat mortality was 8% lower for PD than for matched patients on HD. A report in 2011, using a similar sized cohort, found no survival advantage based on modality, but found a greater improvement in survival on PD compared to the improvement in survival on HD over their study period (1996-2004).

A limitation of these comparisons is that even if you match PD to HD patients to overcome the bias associated with their RRT choice not being random, you are assuming that the HD patients matched to those on PD would have been PD “candidates” (and vice versa) in the first place. Patients not eligible for PD usually are not as healthy as those that are, and that could bias any conclusions about survival across these two methods of RRT.

To overcome this limitation, in a recent study published in AJKD, Wong et al compared PD and HD patient survival using only patients eligible for both modalities. Starting with an original cohort of 2,032 incident ESRD patients (1,579 HD, 453 PD), PD had a significant survival advantage for those < 65 years of age over a median follow-up of 520 days with a hazard ratio (HR) for death of 0.6 for PD v HD (95% CI, 0.42-0.86). However, about one-third of the patients on HD would never have been PD candidates in the first place because of medical conditions or social limitations. Only a few PD patients were similarly not considered candidates for HD. This biases survival towards PD.

Removing those ineligible subjects left an “eligible” cohort that consisted of 926 incident HD and 450 incident PD patients who were followed for a median of 547 days. The authors also looked at those patients that started RRT only as an outpatient (874 patients: 465 HD, 409 PD). The HR for death was 1.08 (95% CI, 0.82-1.42) of the total eligible cohort (based on deaths per 1,000 patient-days), and 1.19 (95% CI, 0.86-1.65) for the outpatient eligible cohort. Of interest was that in all cohorts, the PD patients at baseline had higher serum albumin and hemoglobin levels, and had less CHF and cerebrovascular disease. However, these covariate factors that could have impacted survival were adjusted using Cox regression. They concluded that when you look only at patients eligible for both PD and HD, patient survival was similar for both therapies. 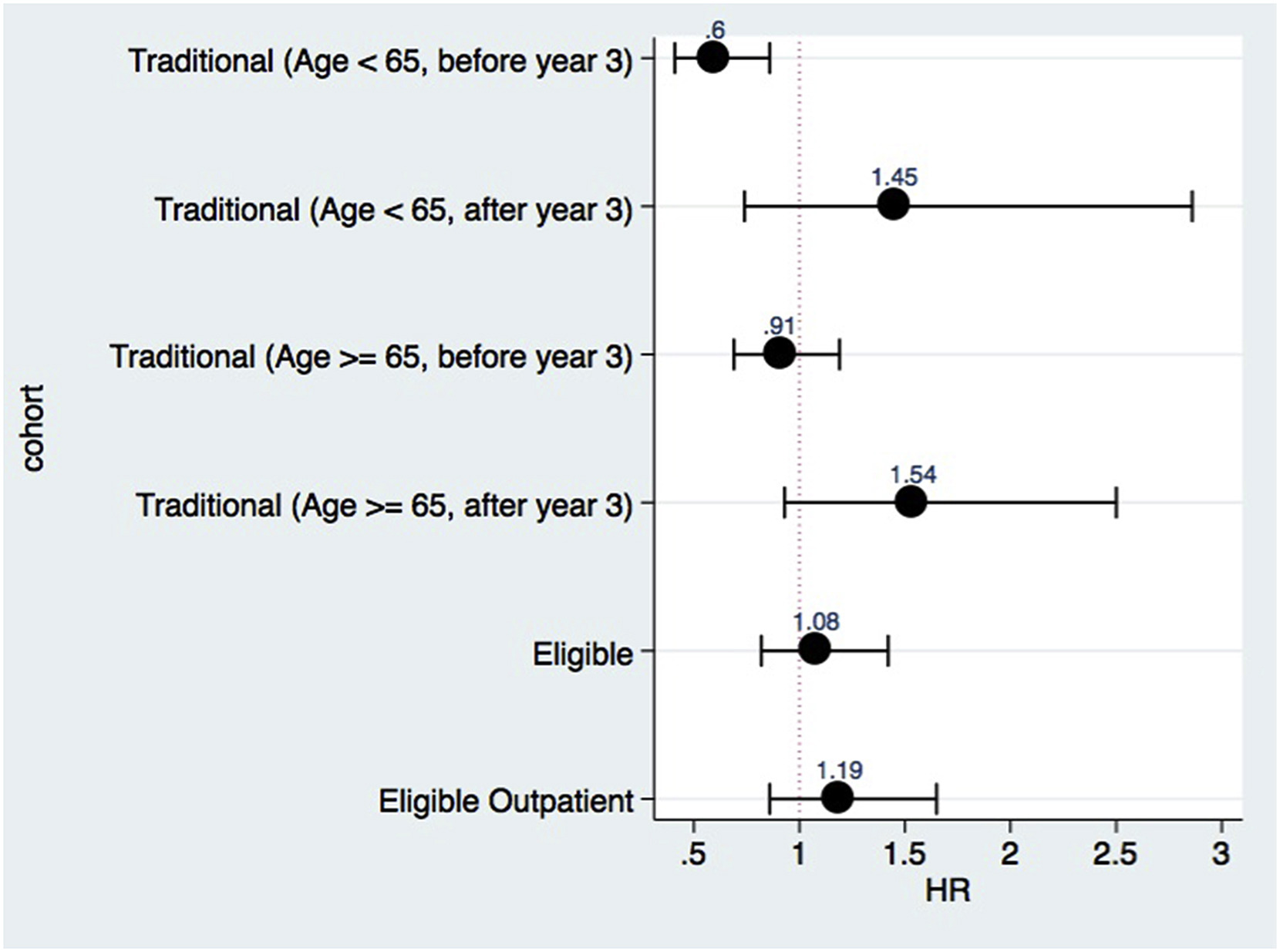 There appear to be few limitations to this study except perhaps the cohort size is significantly smaller than previous reports that utilized large USRDS registry data sets. The median follow-up in this study was about 1.5 years and a longer period may shed further light on this topic. As of 2012,  Canada had 18.3% of its ESRD patients on PD compared to 7% in the US. Our northern neighbors have always been leaders in peritoneal dialysis research, but these data are particularly important to the US as recent changes in Medicare reimbursement for ESRD favor home therapies.

Where do Wong’s findings lead us in our RRT recommendations when we consider factors other than lifestyle preference? When your CKD patient comes to that RRT fork in the road, which direction should you suggest they take? These data increase the confidence that the road less travelled (PD) and the road more travelled (HD) have equivalent patient survival. And in that regard, I believe that the Scarecrow’s advice to Dorothy on which direction she should take on the Yellow Brick Road says it all:

Dorothy: Now which way do we go?
Scarecrow: Pardon me, this way is a very nice way.
Dorothy: Who said that?
Dorothy: Don’t be silly, Toto. Scarecrows don’t talk.
Scarecrow: It’s pleasant down that way, too.
Dorothy: That’s funny. Wasn’t he pointing the other way?
Scarecrow: Of course, some people do go both ways.

3 Comments on PD or HD: Which Road Do We Take?