What would you think about a drug that has been covered in the New York Times, 60 Minutes, CNN, and Forbes? Surely it’s a blockbuster and cures cancer, prevents heart attacks, or perhaps even prevents kidney failure? However, when you hear that ProPublica and Charles Ornstein are also involved… it feels like a bucket of ice water thrown on your high hopes.

The truth is, it may be even worse than that. This is a drug where the manufacturer increased prices exponentially, which constituted a huge proportion of the drug expenditure for Medicare. Now two whistleblowers have alleged that the pharmaceutical company bribed doctors. But if one only reads medical journals and doesn’t pay attention to the news in these trying times, this might come as a surprise. This is why a Perspective by Hartung et al published in AJKD comes at a very useful juncture.

How would adrenocorticotropic hormone (ACTH) work in kidney diseases? It is a tropic hormone, so it stimulates target cells in another endocrine gland, in this case the adrenal cortex, resulting in production of cortisol and androgens. One would think that the subsequent effects of cortisol drive the benefits attributed to ACTH.

Fun fact: it was actually approved by the FDA in 1952 for treatment of “edematous states” and to “induce diuresis or a remission of proteinuria in the nephrotic syndrome without uremia, of the idiopathic type or that due to lupus erythematosus” (ie what we now know as minimal change disease), via its cortisol stimulating action.

The timeline is significant for a couple of reasons. The most common glucocorticoids we use today, prednisone and prednisolone, were developed by Arthur Nobile at the Schering Corporation in 1950, and approved by the FDA a few years later in 1955. The Kefauver-Harris Amendment (or the ‘drug efficacy’ amendment) was passed in 1962 following the thalidomide tragedy, and required not just safety but efficacy as well before a drug was approved by the FDA. In an alternate universe, once prednisone was approved, there would have been little role for ACTH in treating edematous states. Or if the drug efficacy amendment existed, more rigorous evidence of its efficacy would have been mandated before approval.

Fast forward a few decades… ACTH, extracted from porcine pituitary glands, was marketed by a spinoff of a meatpacking company (Armour and Company) and made its way via Rhône-Poulenc to an Anaheim-based drug company called Questcor. In 2007, Questcor raised the price of the drug to $23,000 a vial, arguing that it was used for a rare disease only (infantile spasms), and it was hard to keep it in production for such a tiny market. There also exists a synthetic form of ACTH (cosyntropin, marketed as Synacthen) – the US rights for which were bought out by Questcor in 2013.

This monopoly made Questcor quite valuable, and in 2017, it was bought out by Mallinckrodt Pharmaceuticals, based in Dublin, for $5.6 billion, and now their ACTH product is marketed at $39,000 a vial. As an aside, Mallinckrodt was fined $100 million by the Federal Trade Commission for setting up this monopolistic condition in 2017. Nevertheless, their ACTH product is still marketed at $39,000 a vial.

The high cost of medications is, of course, not inconsistent with legitimate, effective uses. We do have remarkably effective, albeit expensive, drugs for treating thrombotic microangiopathy, polycystic kidney disease, and curing hepatitis C. Why should we think any differently about ACTH? Moreover, if a drug is used for a rare disease, the small market might mean it may be difficult to have a sustainable supply chain and allow a fair profit (although the latter is a matter for markets and regulators to determine).

However, in their analysis, Hartung et al demonstrate that for the ACTH under discussion, this is not true. From Panel C below, it is clear that ACTH is an outlier: designated as an orphan drug for patients with rare diseases, it was prescribed for over 3,000 Medicare beneficiaries in 2016 alone. In other words, it was priced like a drug with at most a tenth as many potential beneficiaries.

Is ACTH effective in treating edematous states? Many studies are quoted in discussions, but they are usually based on weak evidence (case series or prospective single arm trials). Very few properly designed randomized controlled trials exist. The purported reason for high prices of drugs is sometimes attributed to the cost of research and development.

Hartung et al searched the ClinicalTrials.gov registry and found 23 trials, 12 of which were funded by the drug manufacturer. Just over half of them were randomized trials. Moreover, 8 of these 12 randomized trials actually compare different ACTH dosing regimens. The remaining 4 trials are comparing ACTH to a placebo, or no treatment. The authors could not find a single trial underway comparing ACTH to the appropriate control group consisting of patients treated with glucocorticoids as the comparator. 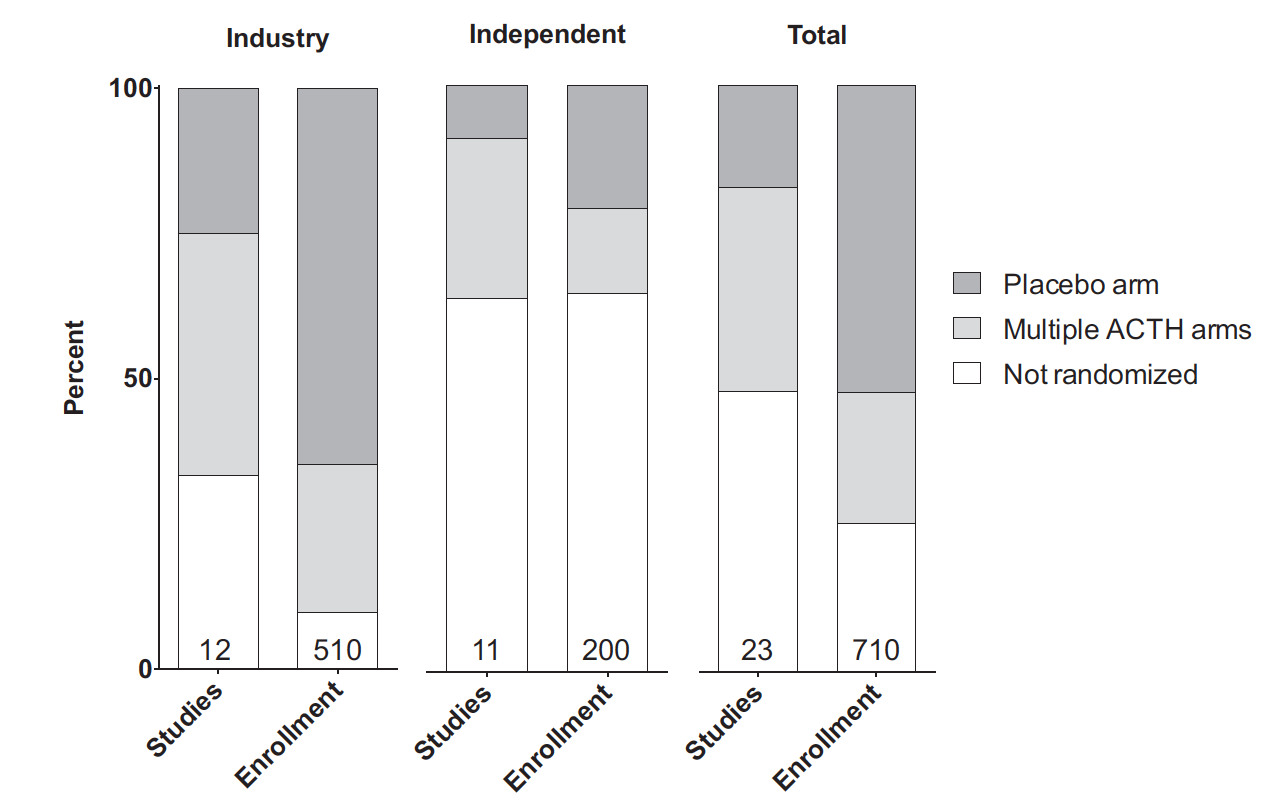 Percent of studies and projected or actual enrollment for studies proposing the therapeutic use of repository corticotropin (rACTH) for renal indications and registered at ClinicalTrials.gov (n = 23), by proposed study design. Total number of studies or enrollees is shown at the base of each bar. Industry and Independent denote the presence or absence, respectively, of Mallinckrodt sponsorship or investigator affiliation as identifiable through ClinicalTrials.gov. For study design, placebo arm includes randomization to either a formal placebo control arm or a study arm lacking additional treatment. Multiple ACTH arms indicates randomization in which all study arms receive rACTH. Figure 2 from Hartung et al, AJKD © National Kidney Foundation.

Does ACTH have a different side effect profile than glucocorticoids? The package insert doesn’t say so – and biologically it should have the same effects. Do we even know, from a pharmacokinetic and pharmacodynamic aspect, the equivalent dose of ACTH vs glucocorticoids? Hartung et al review data suggesting that an 80-unit ACTH injection might provide similar area under the curve plasma cortisol levels as 30 to 40 mg of oral prednisolone (or 24 – 32 mg of methylprednisolone). However, that doesn’t account for the dissimilar kinetics of the plasma cortisol equivalent, the tropic effects of ACTH, or the duration of biologic effects. If, as claimed, there are actions of ACTH on melanocortin receptors, that pathway has not been clearly demonstrated to play a role mechanistically in glomerular diseases.

In summary, Hartung et al conclude that there is no evidence to justify that the high cost of the drug supports ongoing research efforts.