Chronic kidney disease (CKD) is a growing problem worldwide, and as highlighted in NephMadness 2016, there is a relatively new form of CKD of nontraditional etiology in Central America, a nephropathy called mesoamerican nephropathy (MeN). 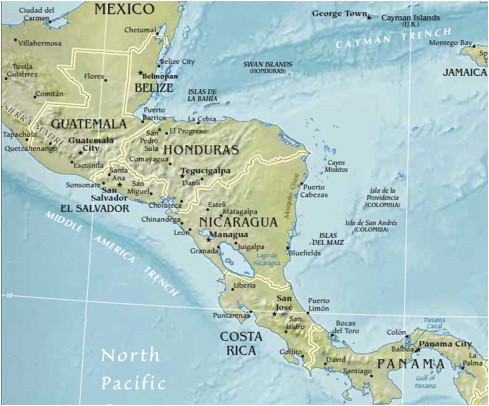 In the early 2000s, a local nephrologist noticed an upsurge of CKD in El Salvador. This CKD rise was later confirmed by several reports stating an increased prevalence of CKD in various regions of Central America (El Salvador, Nicaragua, and Guatemala). The disease affects young agricultural workers, primarily Central American sugarcane workers. Due to its geographical location and its similarities with another infamous kidney disease (Balkan Nephropathy), the local and international investigators suggested the name “Mesoamerican Nephropathy.”

Although a variety of possible etiologies have been investigated, the cause of the rise of MeN remains unknown. The researchers have hypothesized that because pesticides are commonly used in agriculture and these are present in soil and water, there is an increase in its absorption into the proximal tubule which subsequently causes kidney damage. The same mechanism of kidney damage has been proposed for other toxins such as metals and NSAIDs. Other potential causes of CKD are infectious diseases such as leptospirosis and hantavirus. Compounding all this is that areas with prevalent MeN are the hottest regions of the previously mentioned countries. Recent studies have also shown that recurrent heat exposure with physical exertion and inadequate hydration can lead to MeN. Therefore, it is presumed that CKD is caused by heat stress with repeated dehydration and rehydration, and potential toxic exposure. 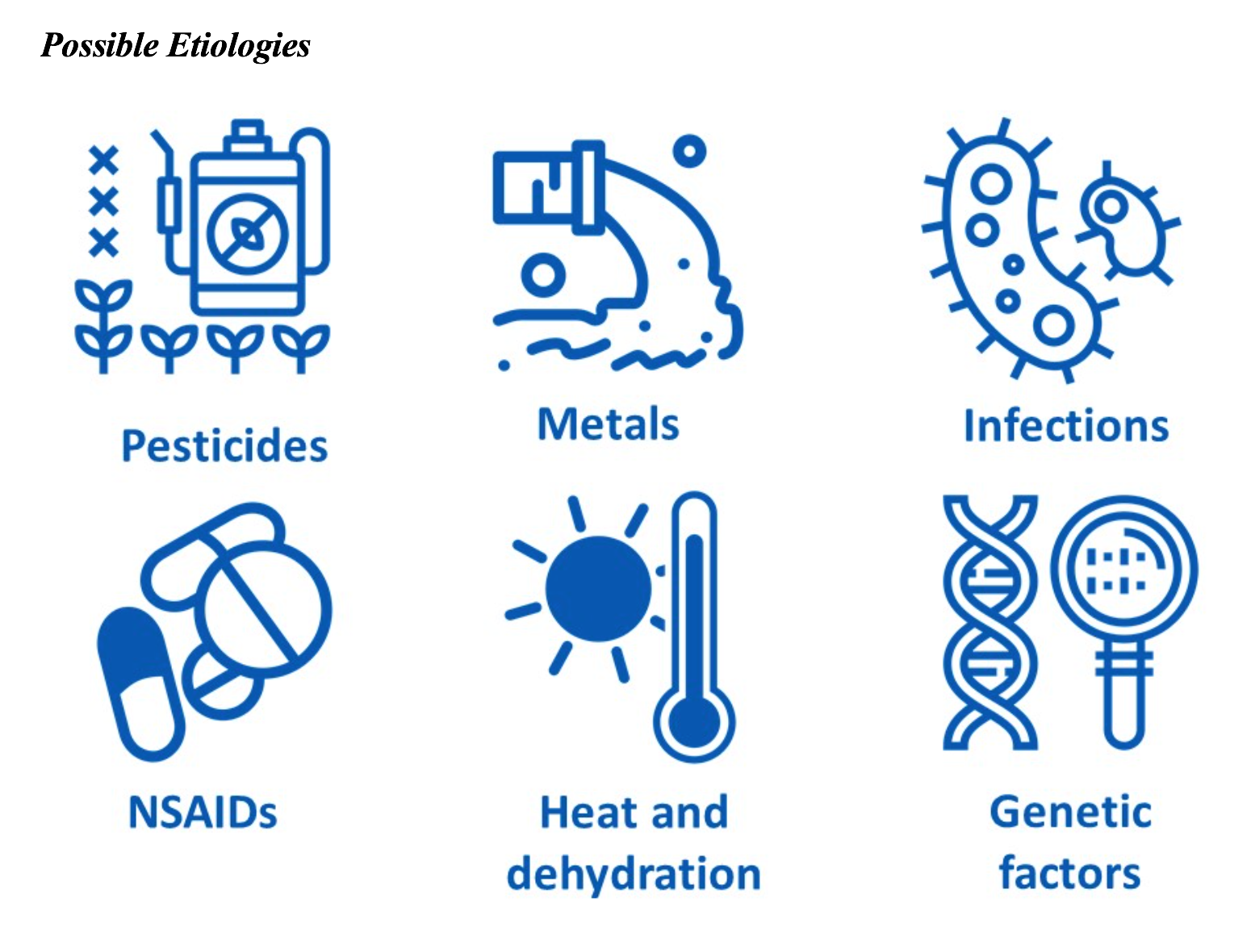 Although most of the epidemiological studies have focused on agricultural workers, whether CKD is present among those doing other than agriculture-related work is not entirely clear. The study by Lyanne Gallo-Ruiz and colleagues, recently published in AJKD, is important because it examines the prevalence of CKD among brickmakers in La Paz Centro, Nicaragua. 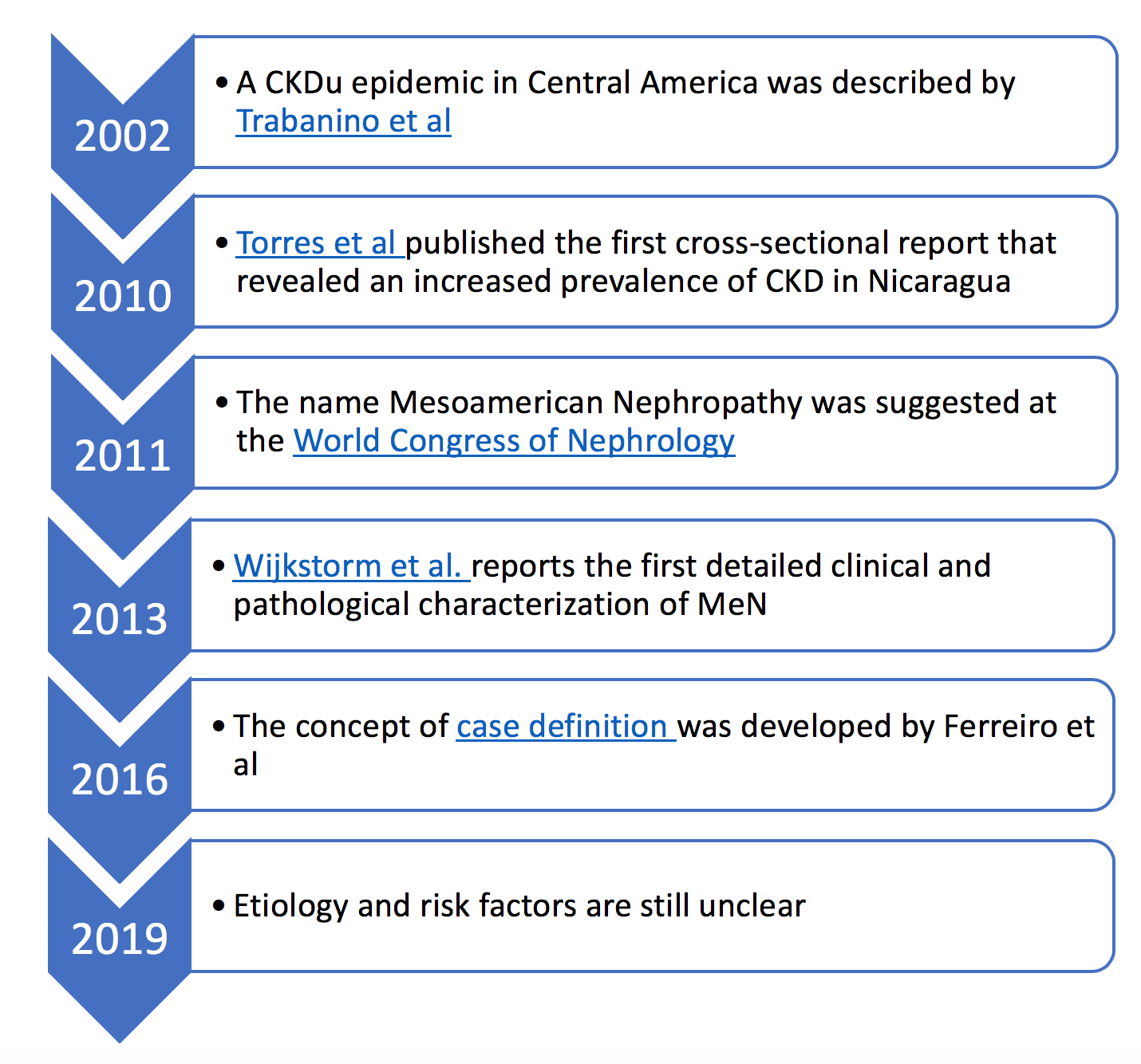 The main objectives of the study were to:

Gallo-Ruiz et al included 224 brick makers from La Paz, Nicaragua, between the ages of 18 to 60. They collected blood and urine from the workers in the morning before their work shift. To avoid any abnormal lab results, if the workers had already worked more than 2 hours, they were deferred to start the study the following day. All workers enrolled in this study performed brickmaking related activities. 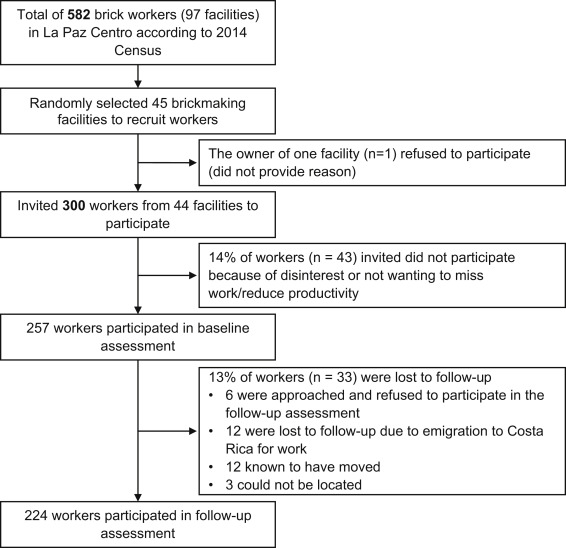 Interestingly, the authors hypothesized that those workers who performed tasks involving an oven were at higher risk for heat exposure and CKD. Thus, they grouped them into three mutually exclusive job exposure categories: (1) oven work at both visits; (2) oven work at one visit; and (3) no oven work.

More than three-quarters (81%) of the subjects were between 18-44 years old. Most workers recruited were men (86%), and most (76%) participants had an occupational history of working in brickmaking for more than six years. Thirty-one percent of workers reported having at least one first-degree family member with CKD, and 15% were presumed to be full-time oven workers. 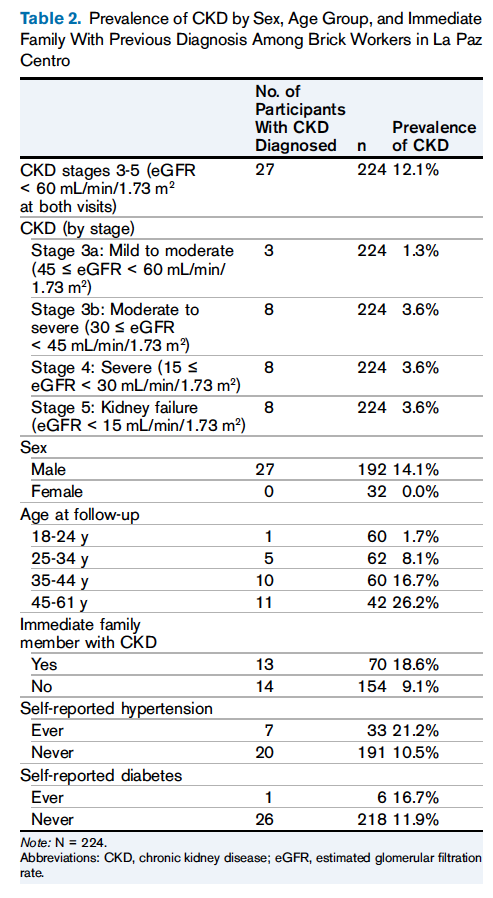 One of the main findings from this study was that workers who performed oven work had 5.47 (95% CI, 1.40-21.34) greater odds of having CKD compared with workers who didn’t report working with the oven at either point. Lack of education, increasing age, and having an immediate family member with CKD was associated with having a lower eGFR at baseline. eGFRs increased by 3.91 mL/min/1.73 m2 on average during the study period. Gallo-Ruiz et al hypothesized that this could be because the follow-up visit occurred at the beginning of the rainy season when brickworking is less intense due to bad weather. 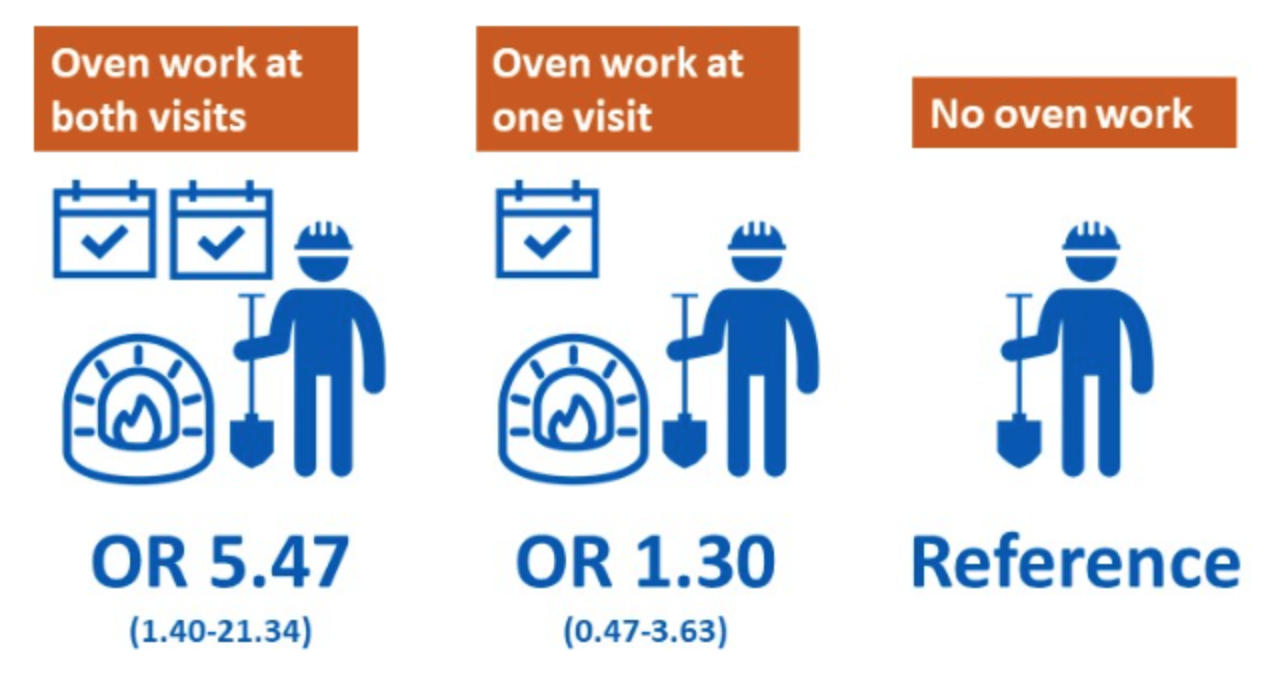 This paper highlights an important matter in Mesoamerican nephropathy. Mesoamerica nephropathy is not limited to sugarcane workers or agricultural workers. CKD risk was substantially higher among oven workers; therefore, these findings are consistent with the hypothesis that occupational heat exposure is a risk factor for CKD in this region.