Granulomatous inflammation in the allograft biopsy is an unusual finding that most often manifests as granulomatous interstitial nephritis (GIN). Interstitial inflammation in the allograft is mostly related to cellular rejection and macrophages can often be found in the interstitial infiltrate. However, granulomatous inflammation should be considered when macrophages demonstrate an epithelioid appearance (with or without multinucleated giant cells) and form aggregates, sometimes accompanied by necrosis. The typical epithelioid appearance of macrophages is characterized by abundant cytoplasm with pale and oval nuclei, resembling an epithelial cell.

The images below are from an allograft biopsy of a 65-year-old patient, 10 months post-transplantation for end-stage kidney disease of an unknown cause. The images show noncaseating granulomatous interstitial inflammation with a discrete aggregate of epithelioid macrophages (arrows), along with some lymphocytes. The adjacent tubules show tubulitis. 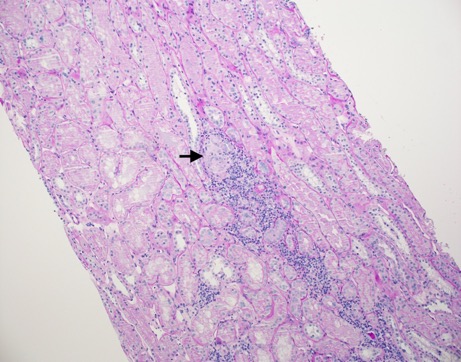 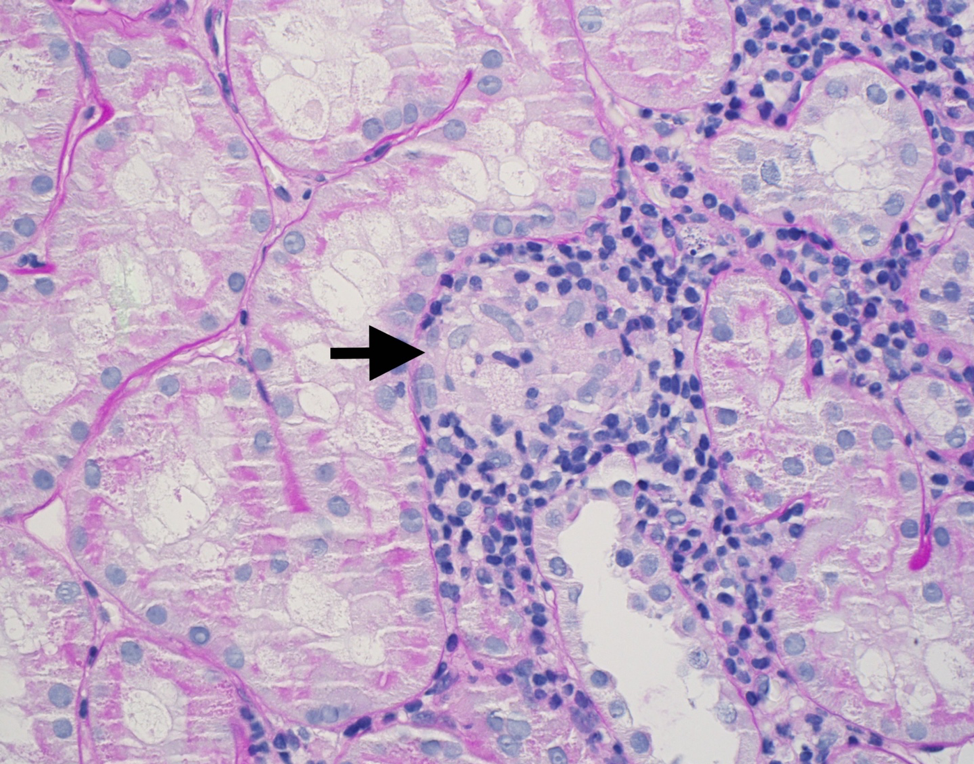 In a recent series, Farris et al reported 23 cases of GIN in allograft specimens and found that infection was the most common cause, responsible for GIN in over half of the patients. Reported agents were viral (adenovirus and polyomavirus), bacterial (mostly gram-negative bacteria), fungal, and mycobacterial. Interestingly, they also reported that the infection-related GIN exhibited some characteristic morphological features, including megalocytic inflammation, glomerular granulomas (miliary tuberculosis), as well as the presence of microorganisms in granulomas demonstrated by special stains. In comparison to the native kidney, drug-induced GIN is much less frequent in the allograft, ranging from 3% to 22% of cases. It is important to keep in mind that GIN in the allograft can also be caused by recurrent or de novo diseases, such as sarcoidosis, TINU, etc.

Granulomatous inflammation is not a feature of cellular rejection. However, the possibility of a concomitant diagnosis of GIN and cellular rejection should be raised when vascular lesions, such as intimal arteritis, are present.

To sum up, renal allograft GIN is rare, and the majority of cases are secondary to infections. The pathologic examination of renal allograft with granulomatous inflammation should prompt a search for cytopathic viral changes by light microscopy and by immunohistochemical studies, for acid-fast bacilli by Ziehl-Neelsen stain and for fungal microorganisms by Grocott and PAS stains. However, not all infectious-related cases will have demonstrable microorganisms on the biopsy, and careful clinical and pathological correlation is essential for final diagnosis. Despite a thorough clinical and pathologic investigation, a specific cause still may not be identified, as in the case described above.