The “Drilling Down on Acute Interstitial Nephritis” session was held on Nov 8, 2019, at the ASN #KidneyWk in Washington, DC.

I had the distinct opportunity of meeting some of the very talented participants of the ASN Kidney STARS. The program provided a valuable opportunity for medical students, residents, and graduate students who are interested in nephrology to attend Kidney Week. This year, I asked the Kidney STARS to come up with something tangible: write a summary of what they learned from one of the many sessions that they attended at Kidney Week. Here is Part 1 of the Kidney STARS’ blog posts. 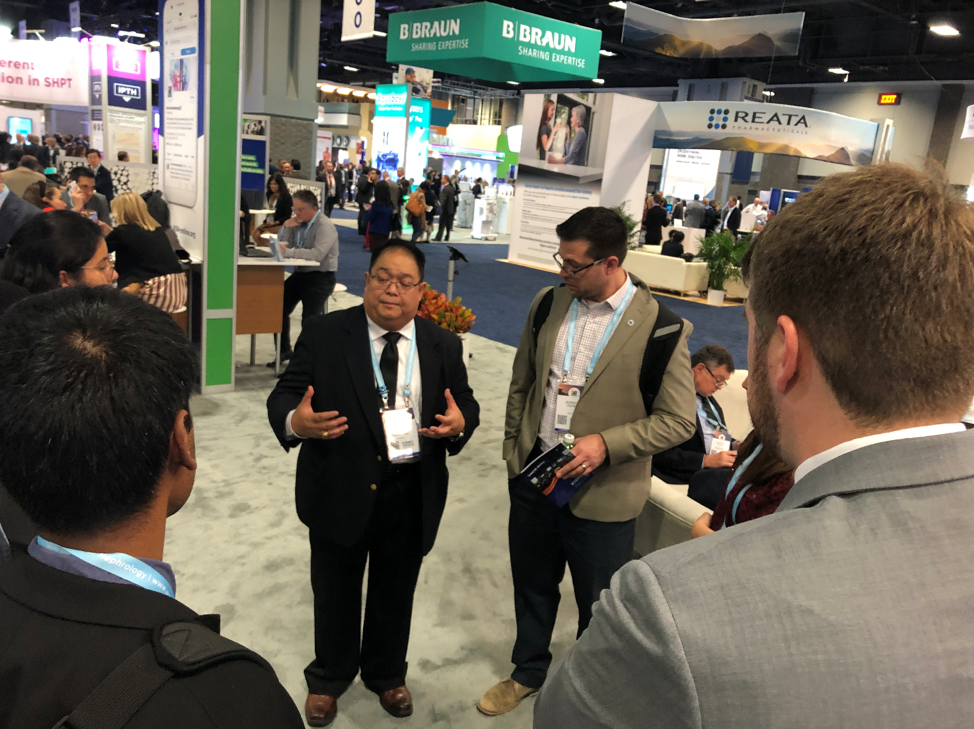 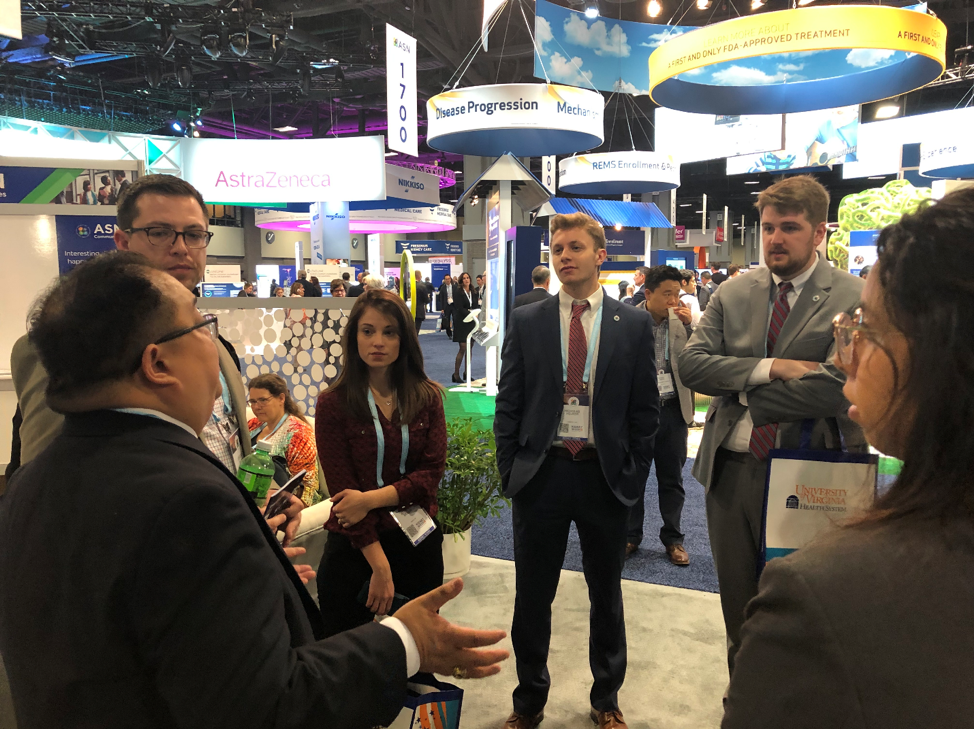 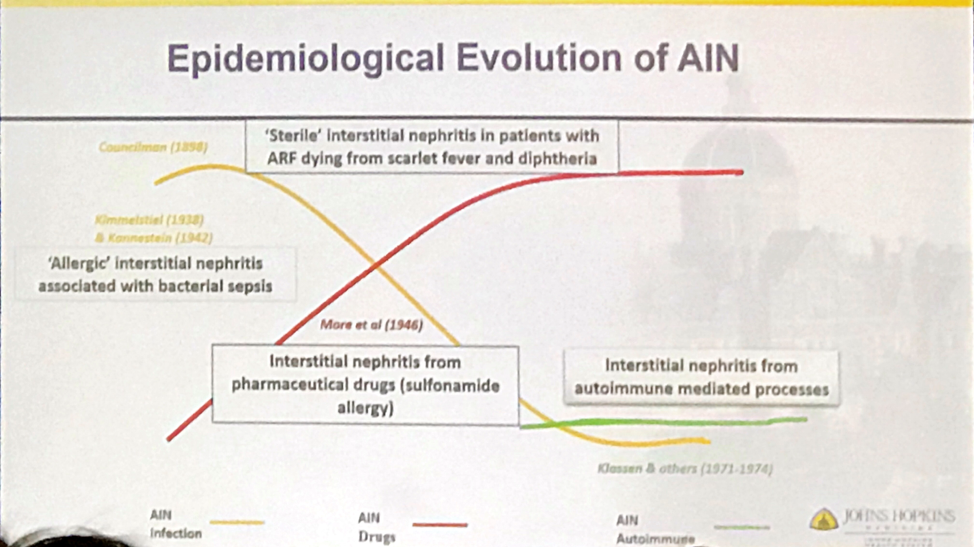 The most common causes of biopsy-proven AIN are antibiotics (45%), NSAIDs (20%), and PPIs (35%), all of which collectively contribute to 71% of drug-induced AIN. 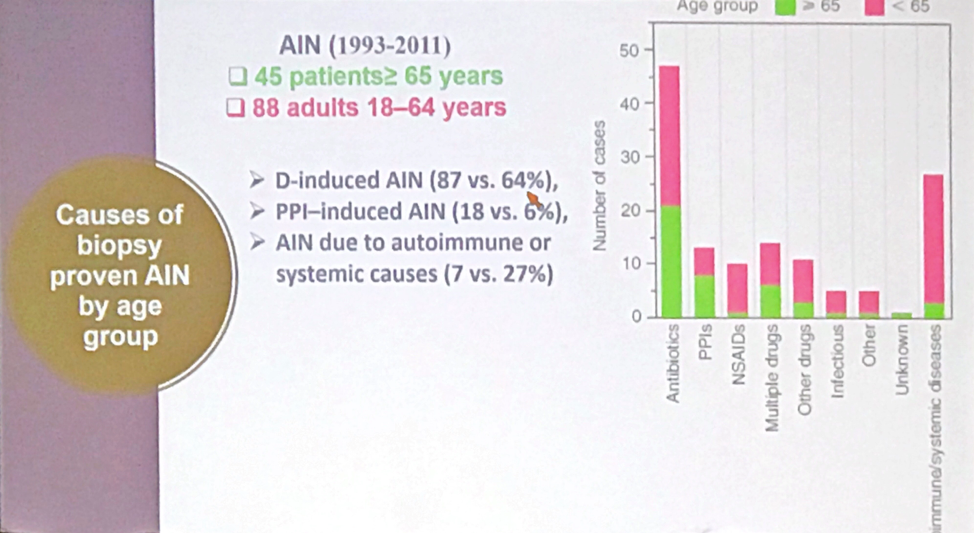 Some of the key histological features include inflammation (focal vs diffuse), edema, tubulitis, and fibrosis (as shown below). 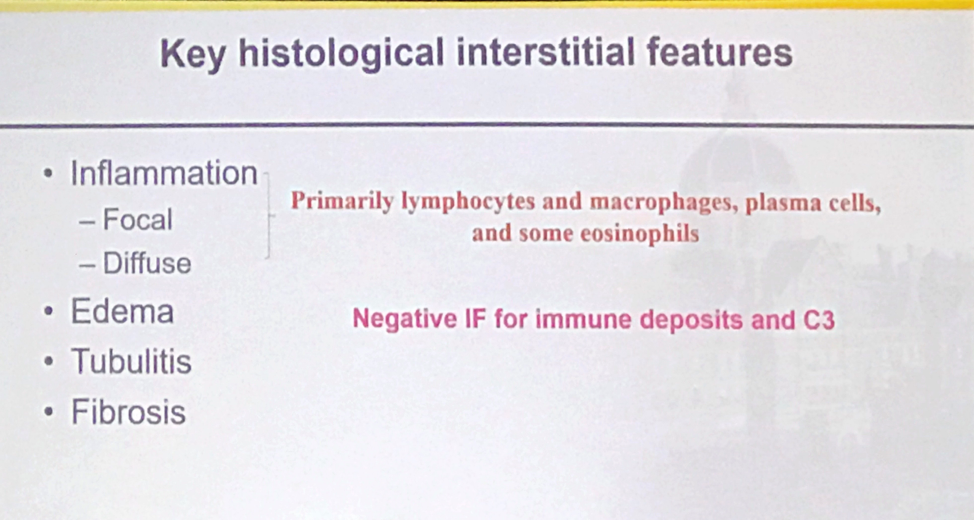 AIN is a clinical-pathologic syndrome that is caused by a variety of etiologies which has changed over time. It can be an isolated finding within the kidney or part of a severe systemic allergic syndrome with multiple organ involvement. Genetic or immunological susceptibility also plays an important role in disease expression.

This was presented by Dr. Dennis Moledina from Yale School of Medicine. His case presentation was centered on challenging the widely accepted presentations of an AIN patient: rash, eosinophilia, and fever. Dr Moledina introduced a case study that analyzed 133 cases of biopsy-proven AIN at Mayo, which showed that 17% of patients presented with a rash or fever, 18% with eosinophilia, and only 7% had the classic triad of fever, rash, and eosinophilia. Additionally, loss of kidney function may be sub-acute.

Between 2015 and 2018, Dr Moledina and his group conducted a study on 265 patients who underwent kidney biopsies for AKI. They found that only 15% had AIN. The three pathologists adjudicated this diagnosis and saw that over 40% of the infiltrating cells were CD4+ T cells. These cells produced Th1 (INF-g, TNF-a) and Th2 (IL-4, IL-5) cytokines. They found that urine TNF-a and IL-9 were higher and independently associated with AIN, concluding that these markers may be useful for an AIN diagnosis.

Taking all of the research into consideration, clinicians have to account for other factors in addition to the classic triad in order to correctly diagnose AIN. Although biopsy may be the most reliable method, it is an extensive process; the potential of other biomarkers such as TNF-a and IL-9 in the urine for diagnosing AIN is an exciting development for the future. 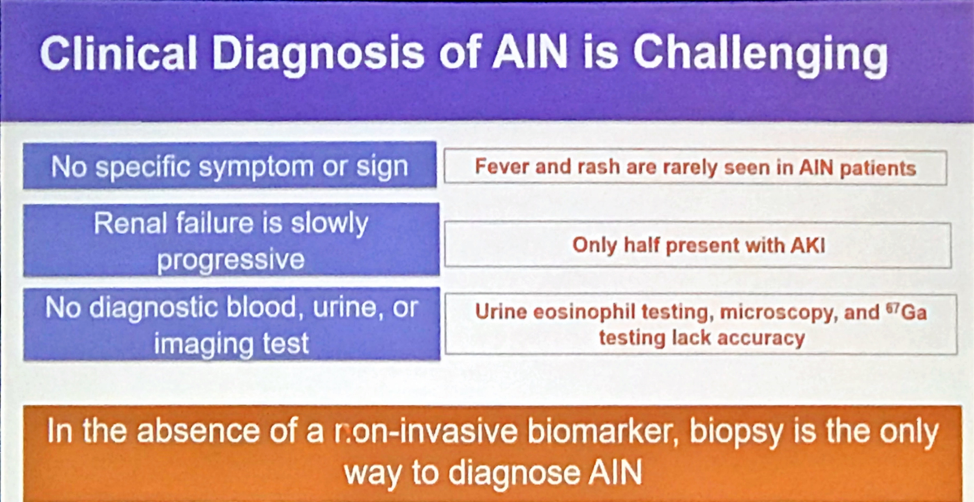 Treatment of AIN: Do Steroids Work or Are We Off Target?

The last portion of this session was presented by Dr. Lada Zand from Mayo Clinic. The evidence regarding the controversial role of steroids was summarized by presenting the studies that are in favor of steroid use in patients with AIN versus those against.

Early discontinuation of the offending agent is important:

At present, there is no general consensus regarding what dose of steroids to use. Dr Zand typically starts with pulse IV methylprednisolone (3 doses of 250-1000 mgs), then prednisone 1 mg/kg/day (max 80 mgs daily), and treats for an average of 3 months.

A nice algorithmic approach to drug-induced AIN can be found here.