Editor’s Note: We asked authors of Original Investigations to provide short plain-language summaries that would briefly summarize what inspired their study, the basic approach taken, what was learned, and why it matters. We hope our readers will find this valuable in helping them keep up with the latest research in the field of nephrology. From the February 2020 issue:

From the authors: Medicare introduced the Quality Incentive Program (QIP) along with the bundled payments to improve quality of dialysis care. The QIP assesses quality of dialysis care on a scale of 0-100 and applies monetary penalties of 0-2% on facilities scoring <60. However, the QIP has been criticized for its lack of prospective evidence on the association between the quality indicators and patient outcomes. We conducted a retrospective cohort study to estimate the association between dialysis facility QIP scores measured in 2015 and patient survival and found that QIP scores were robustly associated with patient mortality. The rate of patient mortality was higher in facilities scoring ≤45 and >45-<60 than those scoring ≥90. Since, QIP criteria have changed each year, these findings need to be replicated over time.

Kidney Biomarkers of Injury and Repair as Predictors of Contrast-Associated AKI: A Substudy of the PRESERVE Trial by Chirag R Parikh et al [FREE]

From the authors: Clinical trials of contrast-associated acute kidney injury (CA-AKI) are costly. Urine and plasma biomarkers may identify high-risk patients thereby increasing expected event rates, reducing sample sizes, and overall trial costs. We conducted a sub-study of the PRESERVE trial to evaluate whether biomarkers could identify high-risk patients and if they could enhance the design of the original trial. Our results show that biomarkers were only modestly associated with the trial outcomes. However, these biomarkers can have a significant impact on trial design. In the case of the PRESERVE Trial, using median cutoffs of plasma KIM-1 or YKL-40 levels to screen patients could have reduced the trial sample size by approximately 2000 patients.

From the authors: Although a declining body mass index (BMI) over time is associated with higher mortality rates in patients on hemodialysis, the BMI cannot distinguish lean body mass from fat mass. The modified creatinine index (CI) was developed as an easily implemented estimate of lean body mass in clinical settings. Jointly considering the 1-year change in the CI, as a surrogate marker of lean body mass, with the 1-year change in the BMI provided greater prognostic information than BMI alone. Evaluating changes in CI over time may be a valuable option for risk stratification of patients on hemodialysis. 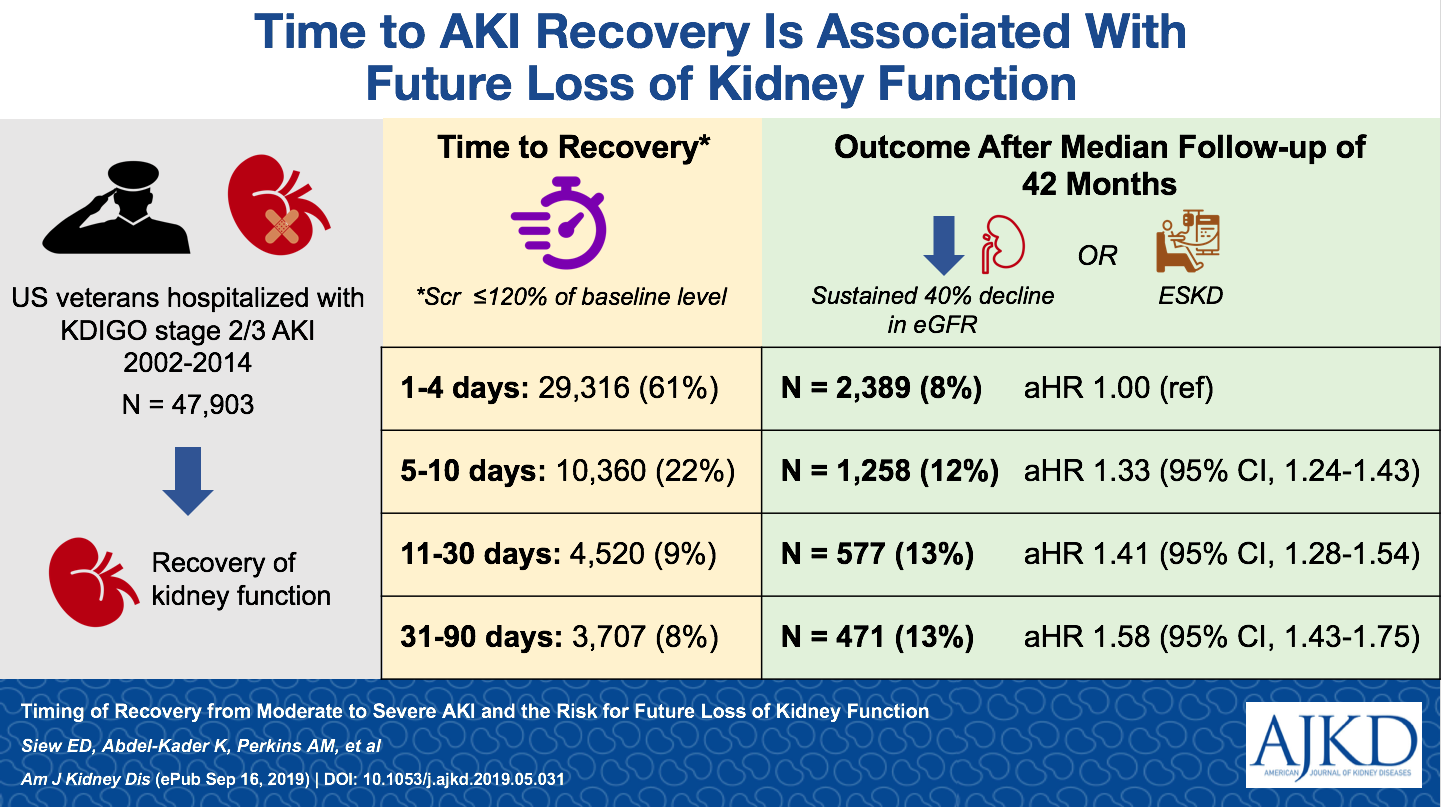 From the authors: We conducted a clinical trial of sodium bicarbonate versus placebo in 149 patients with chronic kidney disease stages 3 and 4. We found that serum bicarbonate levels increased and serum potassium levels decreased. We did not find any differences in bone density or muscle strength.

From the authors: Patients with advanced chronic kidney disease (CKD) often have abnormal levels of calcium and phosphate in the blood. High levels of parathyroid hormone (PTH) and fibroblast growth factor 23 (FGF23), the two hormones that regulate levels of calcium and phosphate in the blood, can also develop as kidney function declines. These abnormalities become severe late in the course of CKD, but the natural history of the changes is poorly described in humans. We studied dynamic changes in blood levels of calcium, phosphate, PTH, and FGF23 in patients who progressed to end stage kidney disease (ESKD) during the 8-year period prior to ESKD. We found that changes in all parameters became evident approximately 5 years prior to ESKD, and that levels of FGF23 demonstrated an especially high rate of change and magnitude of acceleration. Our results suggest that among patients with progressive CKD, dynamic changes in mineral metabolism occur 5 years prior to ESKD. These finding could help with design of future trials that test new treatments for mineral metabolism abnormalities in patients with CKD. 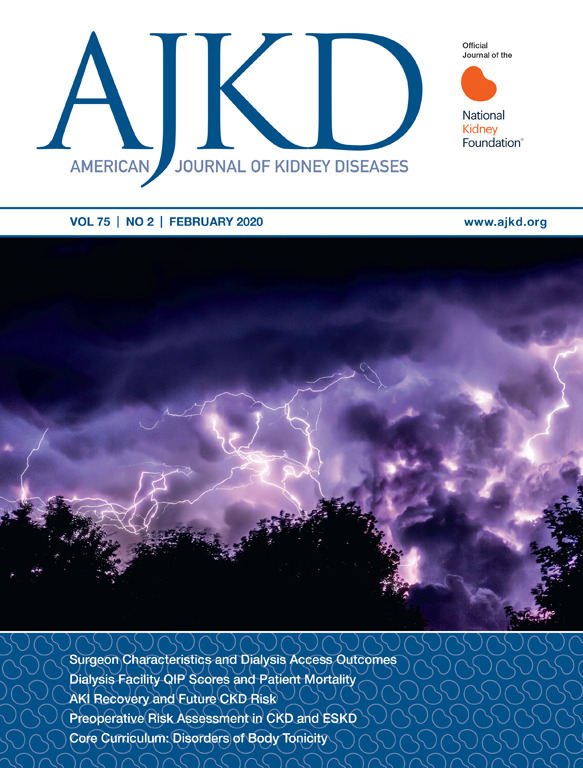 On the Cover: Lightning displays can be majestic to watch, but they can also be deadly, killing 2,000 people annually, worldwide. The lifetime risk of being struck by lightning in the United States is 1 in 5,000. Lightning arises from a separation of charge among clouds or between clouds and the earth. This electrical imbalance is attenuated by the flow of current which we see as a lightning bolt. Similarly, electrical imbalances can occur in the myocardium and the heart’s conducting system, and cause enormous morbidity and mortality. More than 300,000 adults in the United States die each year from sudden cardiac death. People with atrial fibrillation not only have a high rate of stroke, but also have more than a two-fold higher incidence of sudden cardiac death. In this issue of AJKD, Rantanen etal report on the enormous burden of sudden cardiac death among patients with kidney failure treated with dialysis and characterize the prevalence and character of arrhythmias in this population.

The photograph “Lightning and Trees” is by Jeremy Thomas on Unsplash. Released under the Unsplash license.

NephMadness is an educational initiative that was launched in 2013 on the AJKD Blog to increase awareness of World Kidney Day. We present a Special Collection of articles that have arisen from the annual tournament, in anticipation of the 8th NephMadness that will begin on March 13, 2020. All articles are freely available until February 29, 2020. 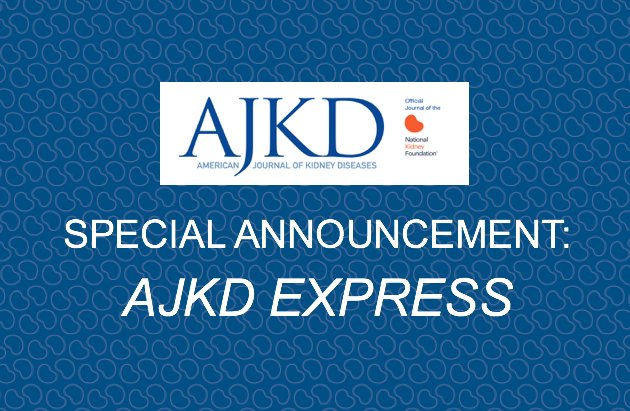 Recognizing the efficiency losses to authors and reviewers when a manuscript turned down by a high-profile journal is submitted to a new journal, AJKD is excited to offer a new expedited consideration process for manuscripts that meet the following criteria:

In this accelerated manuscript consideration process, the editors aim to provide to authors:

Details for AJKD Express are available in this blog post.