Dr. Tiffany Caza is a nephropathologist at Arkana Laboratories. She is passionate about kidney disease research and nephropathology education.

AL amyloidosis is the most common renal lesion associated with monoclonal gammopathy of renal significance and also represents a systemic disease. Deposition of light chain-type amyloid typically occurs within glomeruli, vessels, and interstitium. Amyloidosis restricted to intratubular epithelial cell cytoplasm, however, is exceedingly rare and makes up only 0.003% of cases of renal amyloidosis overall. Intratubular amyloid is characterized by the presence of amorphous material within tubular epithelial cell cytoplasm, which stains pale on H & E and PAS stains, shows ‘Carolina blue’ staining on Masson-Trichrome, and is Congo red positive with apple-green birefringence. Light chain restriction is identified within regions of Congo-red positive staining, similar to a light chain proximal tubulopathy. Ultrastructural evaluation of tubular epithelial cell cytoplasm shows the presence of abundant, small, randomly-oriented fibrils within tubular inclusions, consistent with the deposition of amyloid (Figure 1). 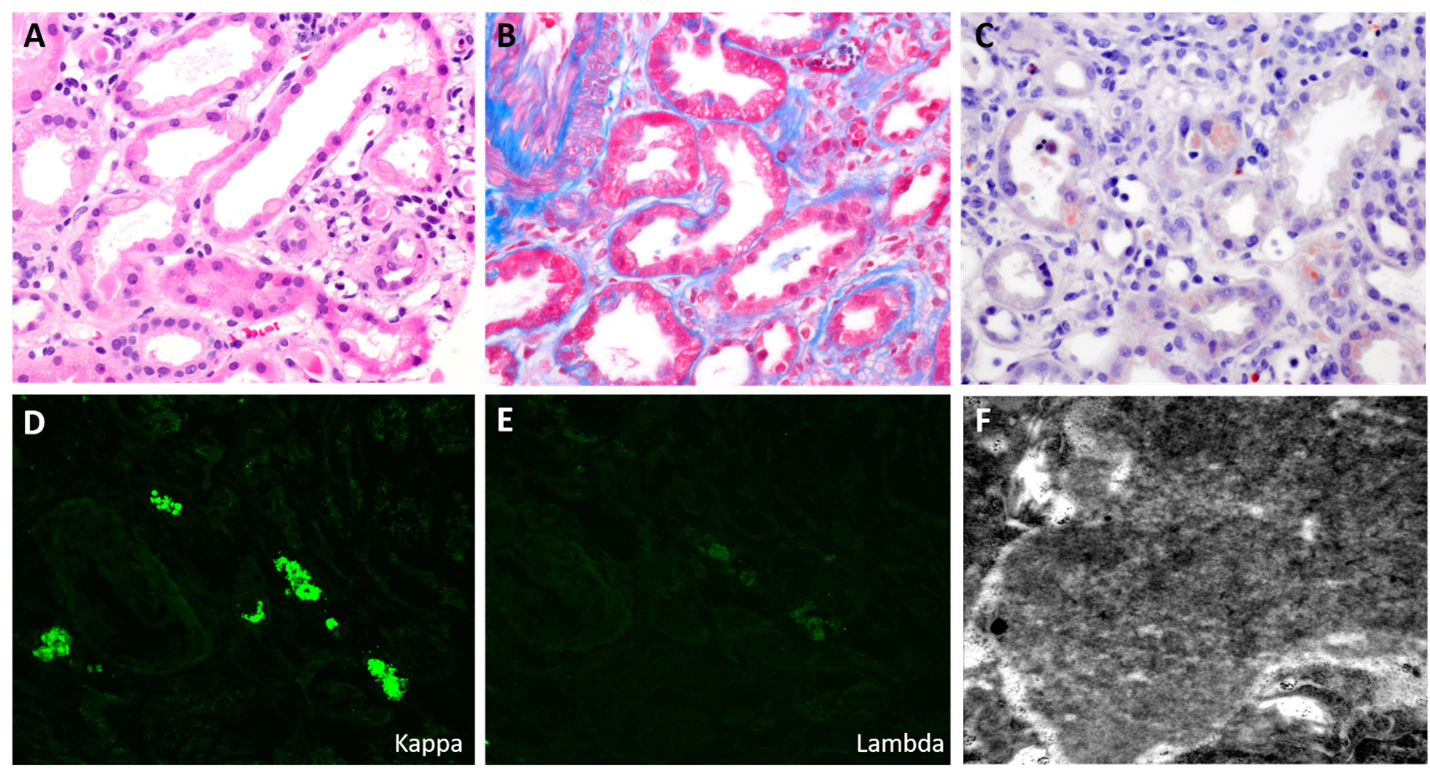 This type of AL amyloidosis was first described in a case report as ‘amyloid proximal tubulopathy’, identified by Larsen et al in 2012. The patient was found to have multiple myeloma, was treated with bortezomib and plasmapheresis, and subsequently had a poor renal outcome. At that time, it was unknown whether intratubular amyloid was associated with systemic AL amyloidosis or was limited to the kidney.

A recent clinicopathologic series of 21 cases of this entity shed light on this disease, which was renamed as ‘intratubular cytoplasmic AL amyloidosis’ (ITC-AL). ITC-AL is a monoclonal immunoglobulin-related kidney disease characterized by the presence of Congo Red-positive cytoplasmic inclusions in proximal and distal tubules. Concurrent light chain cast nephropathy is very common, occurring in 86% of cases. Extrarenal amyloidosis was identified in 14% of cases, and therefore, this can represent a systemic disease in some patients. Upon follow-up, 100% of patients were found to have multiple myeloma, making this a very significant renal lesion even in the absence of concurrent light chain cast nephropathy.

Conclusion: Intratubular cytoplasmic AL amyloidosis is a rare form of amyloidosis which, to date, is universally associated with multiple myeloma rather than with monoclonal gammopathy of renal significance.