Just before Kidney Week, the AJKD editorial office turns a critical eye upon itself and reviews key journal metrics for the past year. The verdict for 2015 could have been taken from an AJKD decision letter: there’s a lot to like, but more work is needed.

What’s undeniably going well is AJKD’s popularity with authors as submissions hit a new all-time high, a 22% increase over the past 5 years. 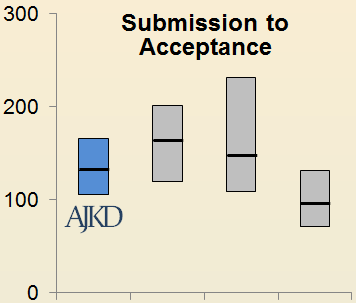 On the other hand, turnaround times remain stubbornly immobile for full-length research articles, despite efforts to reduce the time from manuscript submission to formal acceptance. Nevertheless, as shown in the adjacent box plot, median time to acceptance for AJKD manuscripts was shorter than that of 2 of 3 competing journals, with a smaller IQR suggesting less variation between the experiences of different submitting authors.

The same trends held for overall time from initial submission to e-publication of full-length research articles, though in this 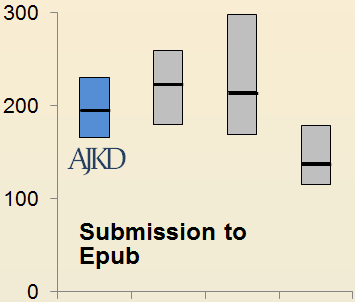 case the gap between AJKD and the best-performing journal shows how much room there is for improvement. To that end, editorial office staff members now track the time between the editor’s acceptance of an article and each of the subsequent steps (transmittal to the publisher, copyediting/typesetting, proofing, and e-publication), with weekly checks to identify any stragglers.

One topic that regularly comes up at Editorial Board meetings is the handling of manuscripts submitted by the editors.

Taking a break from the numbers, the editors noted that 2015 marked the return of the Atlas of Renal Pathology, which provides representative images and key 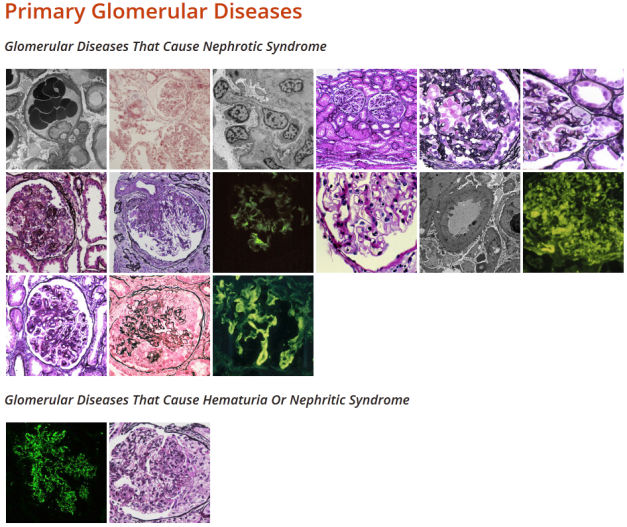 information on pathologic entities. The feature is overseen by Atlas II Editor Agnes B. Fogo, MD, AJKD Education Editor Scott J. Gilbert, MD, and an Advisory Board comprising Charles E. Alpers, MD, Mark A. Lusco, MD, and Behzad Najafian, MD. Atlas content is freely available at the AJKD website or via an image-based gateway at AJKDblog. At this site, the blog team has been assembling content to enrich the educational aspect of Atlas installments, including interviews, quizzes, and commentaries.

Major initiatives like the Atlas re-launch show that the members of the Boston-based editorial team are not slowing down as they prepare to enter the final year of Dr Levey’s term as AJKD Editor-in-Chief. Look for more great journal content in 2016 and…don’t forget to join NephMadness in March 2016.