The decision to screen for subclinical hypothyroidism is controversial, with strong arguments for and against screening and conflicting guidelines from the American Association of Clinical Endocrinologists (AACE) and the US Preventative Services Task Force (USPSTF). The AACE recommends that older patients, especially women, should be screened, while the American Thyroid Association (ATA) recommends screening every 5 years for all individuals over the age of 35. In contrast, the USPSTF concludes that there is insufficient evidence for or against screening, and the Royal College of Physicians of London states that screening of healthy adults is unjustified.

Patients with CKD present even more controversy as progressive loss of kidney function has a negative impact on the synthesis, excretion, and degradation of thyroid hormones. Conventional screening guidelines rarely apply to patients on dialysis due to the inaccuracy of commonly used screening tests in this population and the high risk of early death from all causes. As such, guideline bodies rarely mention this population in their position statements, and in fact, no guidelines exist for thyroid screening in patients with CKD.

In a recent AJKD article, Carrero et al present findings from a systematic review and meta-analysis of observational studies associating thyroid function tests with all-cause and cardiovascular mortality in patients on dialysis. The authors screened nearly 4,000 abstracts from multiple databases, and included 12 studies and 14,766 individuals in their meta-analysis. Thyroid function derangements included a low T3 or T4 (total or free assays) and elevated TSH levels. Their findings suggest that subclinical hypothyroidism, as defined by a low T3 or T4, may be associated with all-cause mortality and cardiovascular mortality in patients on dialysis.

There was a consistent association between low T3 and increased risk of death in dialysis patients. Experimental studies show that low T3 impairs cardiac tissue oxygen consumption, increases vascular resistance, and decreases cardiac output. However, as this analysis was based on observational studies, the data could not prove causality. Importantly, the authors clearly recognized the potential limitations, and suggested that selection bias, outcome reporting bias, and publication bias could have all favored a positive finding, and may threaten the validity of their conclusions. Appropriately, they called for a cost-effectiveness analysis of screening rather than advocating for routine implementation. 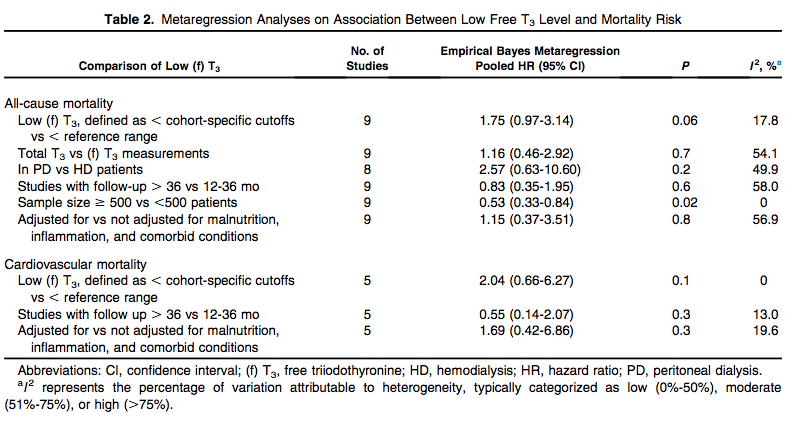 Given the lack of direct evidence for a causal relationship between thyroid dysfunction and poor outcomes in patient with CKD or those treated with dialysis, the benefit of thyroid replacement can only be determined with prospective, controlled trials in patients with laboratory evidence of thyroid hormone deficiency.