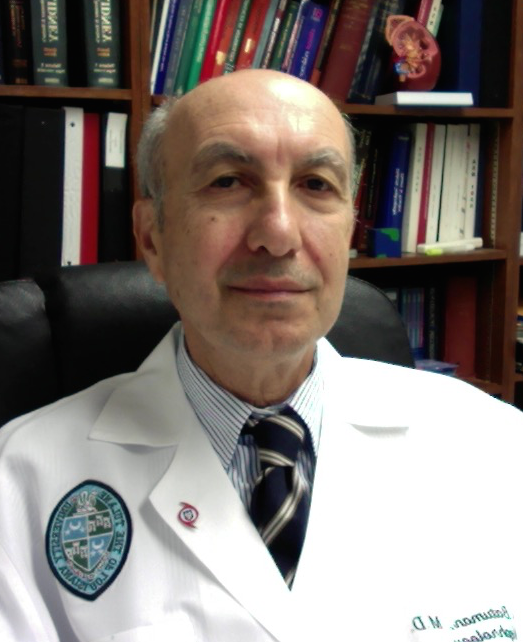 Dr. Batuman, MD, is Professor of Medicine at Tulane University Medical School, and Chief of Nephrology at the New Orleans VA Medical Center. His research interests include mechanisms of acute and chronic kidney disease, endocytosis and toxicity of myeloma proteins in the kidney, role of environmental lead exposure on kidneys, Balkan endemic nephropathy, and hypertension. Dr. Batuman has been the Chief Editor for the Nephrology Section for Medscape since 2001.

NephMadness 2017 bracketology is arguably more complex than that of March Madness. The contenders for the Diabetic Nephropathy region include the old champions (RAAS inhibitors vs glycemic control) and the newcomers (SGLT2 inhibitors vs GLP-1 agonists). For years, RAAS inhibitors (ACEi/ARB control of blood pressure) and glycemic control (defined by achieving HbA1c levels of <7.0) have dominated the scene.

Ever since the Lewis Captopril trial in 1993, both ACEi as well as ARBs have been widely used in diabetic patients (see 2010 review from Ruggenenti et al). The anti-RAAS strategy has been uniformly successful in controlling blood pressure, reducing proteinuria, and slowing the progression of kidney disease in both T1DM and T2DM (Maschio et al, 1996; Ruggenenenti review). For optimal efficacy, these drugs need to be combined with a thiazide or thiazide-like diuretic (recent data suggest that chlorthalidone should be preferred), and/or with dietary sodium reduction, as high-sodium intake blunts the antiproteinuric and antihypertensive effect of ACEi (Vegter et al, 2012).

For some time now the anti-RAAS strategy has seemed to be the reigning champion. Often, the marked reduction of proteinuria after initiation of an anti-RAAS medication was saluted as evidence that progression of kidney disease is halted or slowed down. Longitudinal follow-up of diabetic populations showed that RAAS antagonists markedly improved diabetes-related complications, such as stroke, MI, and amputations; however, their effect on the rate of ESKD has been less impressive despite the consistent and marked improvement in proteinuria (Gregg et al, 2014). This has engendered the question whether reduced proteinuria can be equated with amelioration of the kidney disease.

Thus, it remains controversial whether proteinuria is a valid surrogate outcome to monitor the course of diabetic nephropathy (Lambers Heerspink & Gansevoort, 2015). It may seem that the anti-RAAS approach has reached its limits. Although the rate of diabetic nephropathy has decreased, the burden of diabetic kidney disease keeps rising as the prevalence of diabetes has reached epidemic proportions worldwide (1); hence, the need to develop more effective novel strategies.

Both macro- and microvascular complications of diabetes occur in hyperglycemic milieu of many years. Although the pathophysiology of diabetes is complex and involves multiple hemodynamic and metabolic alterations, each contributing to tissue damage separately, the deleterious effects of hyperglycemia predominate in mediating especially kidney and eye damage. It is, therefore, intuitive that hyperglycemia must be treated in order to prevent or minimize diabetic kidney disease.

The Diabetes Control and Complications Trial (DCCT) was a major clinical study conducted from 1983 to 1993, and the follow-up study, Epidemiology of Diabetes Interventions and Complications (EDIC), have shown convincingly that “intensive control” of hyperglycemia (achieving HbA1c < 7) is effective in reducing the complications of diabetes including diabetic nephropathy (de Boer et al, 2014). Similarly, long-term results from the UK Prospective Diabetes Study (UKPDS), the largest prospective study of newly diagnosed patients with T2DM, which was first published in 1998, also showed beneficial effects of glycemic control on renal complications, which were predefined as development of clinical albuminuria (> 300 mg/L) and doubling of serum creatinine at 12 years of follow-up (Bilous, 2008).

DCCT relied on insulin for glycemic control in participants with T1DM and the UKPDS allowed insulin, metformin, and insulin for tight control of serum glucose in T2DM patients. Since the completion of these studies, we have now access to novel agents that can help control not only hyperglycemia, but also blood pressure in patients with T2DM. These drugs can be viewed in two broad categories.

The first category includes the inhibitors of the renal sodium glucose transporters (SGLT), predominantly SGLT2, which is responsible for more than 80% of glucose reabsorption in the kidney (DeFronzo et al, 2017). In the second category are the incretin mimetic agents, i.e., glucagon-like peptide 1 (GLP-1) receptor agonists (the glutide drugs), and dipeptidyl peptidase 4 (DPP-4) inhibitors (the gliptins)(see Scheen 2013 and 2015). Both groups of drugs, increasingly used in the treatment of T2DM, are shown to help achieve glycemic control, cause natriuresis (Lovshin et al, 2015; Maliha & Townsend, 2015; Lambers Heerspink et al, 2016), and reduce blood pressure—the deadly duet responsible for diabetic kidney disease and other microvascular complications.

Where is this bracket headed? The longest-reigning champs, the anti-RAAS category, has the strongest record thus far, and there are numerous studies that support their renoprotective efficacy. They are unequivocally the most effective antiproteinuric agents not only in diabetics, but also in nondiabetic kidney disease patients. However, doubts exist as to whether proteinuria is a valid surrogate outcome for kidney disease, and robust primary kidney outcome data, such as doubling of serum creatinine or progression to ESKD, have not been observed with consistency. As the VA NEPHRON-D experience showed, combining an ACEi with an ARB accentuated the antiproteinuric effect, but this was associated with higher risk of adverse events, and this combination is discouraged (Fried et al, 2013). Nevertheless, it can be argued that the anti-RAAS approach is thus far the only category that can justly be called a true game-changer.

Obviously, to prevent diabetic nephropathy requires a multipronged approach, and the clinician does not have to choose a “favorite” among possible options like a sports fan. Whether blood pressure control through RAAS inhibitors beats glycemic control implies a Hobbesian choice, because no clinician would attempt to achieve one effect while ignoring the other. Yet surprisingly, there are data suggesting that blood pressure control may have a more significant effect on the renal outcome than glycemic control. For example the ADVANCE-ON Trial, which showed that blood pressure control using perindopril-indapamide (an ACEi and a diuretic) combination “for an average of 4.5 years resulted in significant long-term benefits with respect to death from any cause and from cardiovascular causes, whereas intensive glucose control for an average of 5 years did not” (Zoungas et al, 2014).

As the incidence of T2DM continues to increase, the ESKD burden continues to rise worldwide. Short of finding a cure for diabetes (2), we are forced to do the best we can for the diabetic patient to minimize macrovascular and microvascular complications. It is hard to imagine treating a diabetic patient without an ACEi or an ARB, in some cases even if the patient does not have hypertension, while simultaneously trying to achieve glycemic control.

The newcomers, the SGLT2 inhibitors and incretin mimetics, are promising, but they have not demonstrated a potential for breakthrough yet. Clearly, they are welcome additions for the treatment of T2DM as they address a key mechanism in the pathophysiology of diabetes, and help achieve better glycemic control, as well as blood pressure and weight control. Still, they seem to have a long way to go before they can be shown to have an impact on the renal outcomes comparable to that of ACEi or ARBs.

The anti-RAAS approach has for a long time been the mainstay of treatment of diabetic kidney disease. Their unique antiproteinuric and anti-inflammatory effects have proved to be consistently renoprotective (Remuzzi et al, 2005), making these drugs indispensable in the management of diabetic kidney disease, and have made them champions for nearly three decades. It seems unlikely that the reigning champions will be dethroned anytime soon.

Read more about RAAS inhibitors in the Diabetic Nephropathy region.