‘”Prediction is not just one of the things your brain does. It is the primary function of the neo-cortex, and the foundation of intelligence.’” – Jeff Hawkins, inventor of the Palm Pilot, in ‘On Intelligence.’ 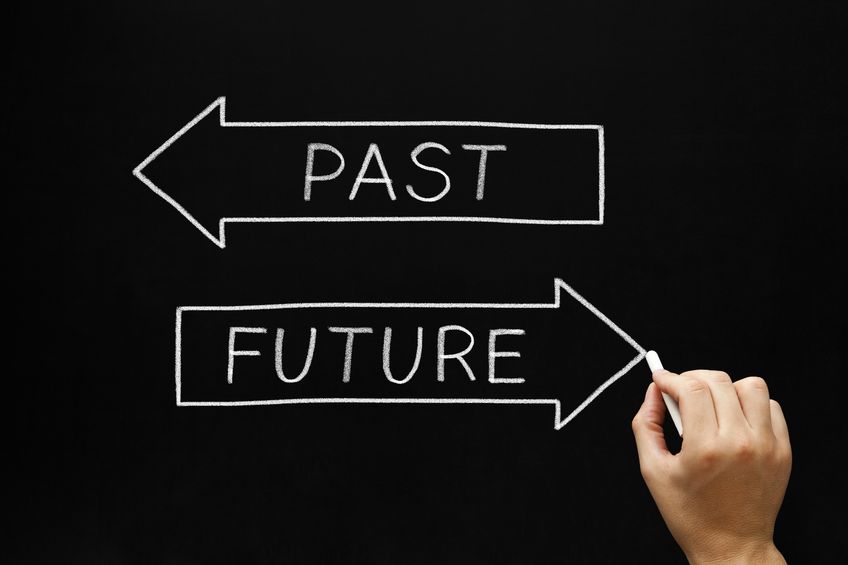 The title of this post refers to ‘SuperForecasting’ by Philip Tetlock. Why would we want to predict the future? Most often we just want to know, but in conditions such as chronic kidney disease (CKD), prediction allows for planning. Treatment for end stage renal disease (ESRD, requiring dialysis or transplantation) requires planning for vascular or peritoneal access, planning for a possible pre-emptive transplant, and planning for life changes that can easily become overwhelming.

A few years ago, Nav Tangri and colleagues published their groundbreaking work, providing us with a simple 4-variable ‘kidney failure risk equation’ (KFRE) that allows for predicting who would go on to ESRD at 2- and 5 years. Their 4-variable KFRE included age, sex, estimated GFR, and urine albumin:creatinine ratio. They also have a refined 8-variable equation (which includes serum calcium, phosphate, bicarbonate, and albumin values), which has even more precision compared to the 4-variable version. In a recent study published in AJKD, Tangri et al report on a newer, improved version of the 8-variable equation, which uses dynamic values for prediction.

What do we mean by using dynamic values? Consider two hypothetical patients with similar risk profiles. Both patients are 65-year-old men with a GFR of 25 ml/min, a small amount of albuminuria, and reasonable lab values for calcium, phosphate, bicarbonate, and albumin. Their 2- and 5- year risk of ESRD would be about 4 and 12%, respectively: 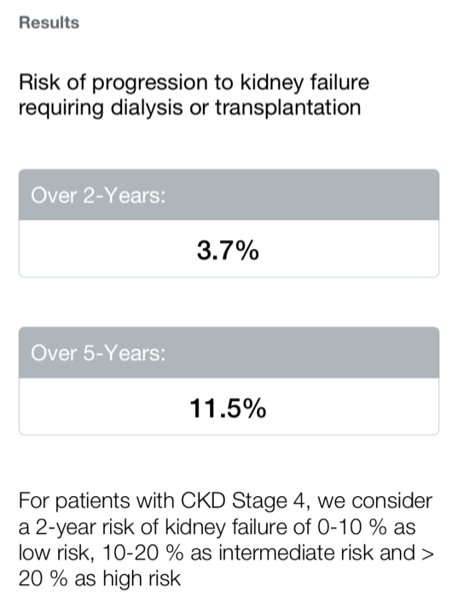 Risk of kidney failure at 2 and 5 years, for the hypothetical patients described in the text with a GFR of 25 and minimal albuminuria (calculated using 8-variable KFRE, with the Calculate by Qx MD app)

What if you know that a year ago, one patient had a similar GFR of 25 ml/min, while the other patient had a GFR of 40 ml/min, and there has been a significant decrease in the past year? Intuitively, you would prognosticate a greater risk in the latter patient, but the existing KFRE does not account for changing values. If we use the values from a year ago (i.e. GFR 40 ml/min), we calculate a much lower 2- and 5- year risk of ESRD – about 1% and 3%, respectively: 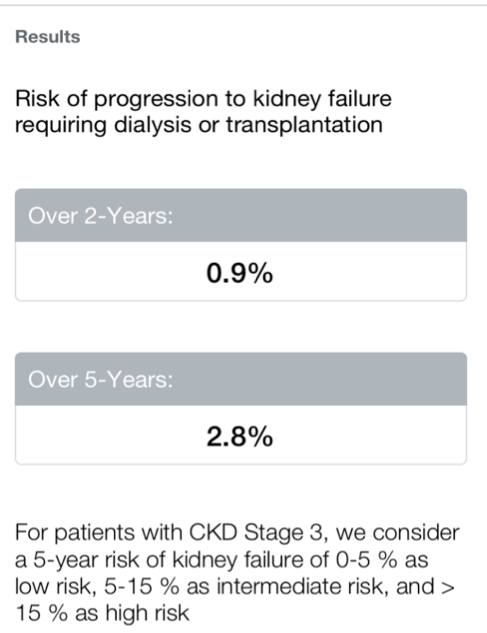 Risk of kidney failure at 2 and 5 years, for the hypothetical patient described in the text, if we had calculated it a year ago, with a GFR of 40 and minimal albuminuria (calculated using 8-variable KFRE, with the Calculate by Qx MD app)

Clearly, some event in the last year had a major effect on the kidney function, and now the risk is higher. But how high is it? Is the risk the same as the patient with stable kidney function with the GFR of 25 ml/min throughout? The same quandary applies if there has been an increase in albuminuria or a similar adverse change in the other lab variables. This is the dilemma that the new study aims to resolve.

In this AJKD study, Tangri et al used data from about 3,000 patients who had longitudinal follow-up for a few years from a nephrology clinic at Sunnybrook Hospital in Toronto. Over the study period, about 11% developed kidney failure. Unsurprisingly, the ESRD risk was much lower in those who had CKD stage 3 at baseline (3%) compared to those who were already at CKD stage 5 at baseline (60%). About 40% had diabetes and 90% had hypertension. As a minor segue, blood pressure never even made the original prediction equation (which should not shock NephMadness followers) and hence, it was not a factor in the current study.

In the results, it comes as no surprise that change in GFR (using GFR as a time-dependent predictor) emerged as a significantly stronger factor for kidney failure risk prediction. The difference for every 5 mL/min greater GFR was an HR of 0.44 compared to 0.65. Interestingly enough, change in albuminuria went the other way, which may be because fewer than 50% of patients having more than 2 measures over the follow-up period. Though some predictors such as hypocalcemia and age remained significant in the dynamic model, variables such as gender, phosphate, albumin, and bicarbonate levels were no longer independently associated with renal outcomes, suggesting the magnitude of the effect of change in GFR.

There are other factors to be considered, however, as discussed in a recent AJKD review by Kadatz et al (also covered on the blog). Tangri et al report a modest improvement in discrimination, on the basis of the C-statistic and integrated discrimination improvement (IDI) statistic. On the calibration front, there is a greater dispersion between risk deciles, with greater agreement between observed and predicted values in the dynamic model.

Are these results sufficient for us to start using the newer equation? This does require validation in an external cohort, as has been done with the original KFRE. These results make intuitive sense, needless to say, and one can safely predict – based on past performance – that Tangri and colleagues will go on to perform the additional research that is needed to translate this prediction to clinical practice.

In the accompanying editorial (freely available), Greene and Li helpfully walk us through the analytic methods behind risk prediction. In contrast to static Cox regression, the dynamic time-dependent Cox regression provides the ability to predict events over any time horizon compatible with the data. Given the relative novelty and complexity of these equations, this helpful editorial provides more methodological background for the interested reader to better understand these models.