The Hypertension Canada (previously known as Canadian Hypertension Education Program [CHEP]) guidelines have been updated annually since 1999. The development process of the guidelines begins with review of evidence and is compiled by many subgroups (eg on blood pressure measurement, renal and renovascular hypertension, pharmacotherapy with coexisting heart disease, to name a few). If a change is necessary based on the evidence, this is reviewed again by an independent Central Review Committee. The process culminates with a consensus conference of the entire recommendation task force (RTF), comprising over 80 family doctors, internists, pharmacologists, cardiologists, nephrologists, endocrinologists, neurologists, and nurses, where each change is discussed, debated, and finally drafted.

Changes in the recently published 2017 guidelines are highlighted below:

There have been no changes in the diagnosis or thresholds for diagnosis. However, it bears to emphasize that automated oscillometric blood pressure (BP) measurement is the preferred method to use in office. Also, out-of-office BP measurement (eg with ambulatory or home BP measurements) is an important component of confirming diagnosis of hypertension. Take a look at the AJKD Blog and NephMadness coverage of these topics for more background and context. 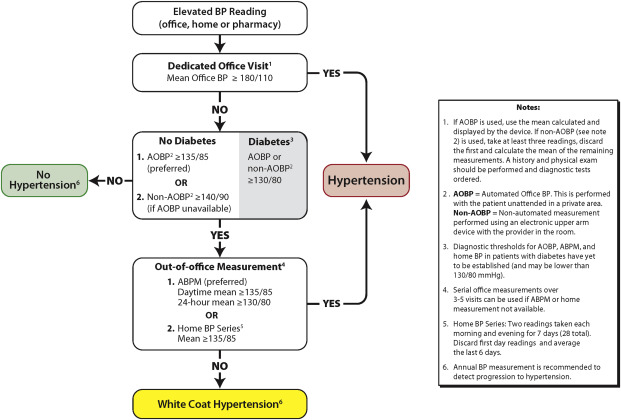 New this year are grade D recommendations for diagnosis and treatment of renovascular hypertension from fibromuscular dysplasia (FMD). The concern with this condition is the late diagnosis (usually 4-9 year latency from initial presentation) and potentially devastating ischemic complications. Hypertensive patients who should get screened for FMD include those who are younger than 30 years, especially non-obese women, and those with a family history of FMD, apart from the other usual renovascular clues. Also, in those with confirmed renovascular FMD, screening with CT or MR angiography is recommended to detect extrarenal (especially cervico-cranial) FMD, which may include dissections and aneurysms. For treatment, there is another new grade D recommendation to consider revascularization in these patients with angioplasty (unlike with atherosclerotic RAS, where medical management is preferred – see AJKD Blog coverage here).

Elderly age and frailty no longer a consideration for higher target

An earlier version of the Hypertension Canada guidelines, mainly based on the Hypertension in the Very Elderly Trial (HYVET), recommended a target of < 150 for the very elderly (age > 80 years). This separate recommendation is now removed, along with the caution about frailty. Frailty is indeed an independent and robust risk factor for falls, adverse drug reactions, institutionalization, and death. It has been used, perhaps lazily, as a simple heuristic for therapeutic inertia, and a careful review suggests it should not be considered as a modifying factor in and of itself. The elderly (defined as > 75 years, mean age 79.9 years) in SPRINT were a pre-specified subgroup of interest. In Williamson JD et al (JAMA 2016), just as in the main analysis, there was a significant benefit with intensive BP lowering for the primary outcome (HR 0.66, 95% 0.51-0.85) as well as all-cause mortality (HR 0.67, 95% CI 0.49-0.91), with no difference in serious adverse events. Though frailty was not a prespecified covariate, about a third of these patients were frail, as assessed using the frailty index or gait speed. There was no difference in the benefit of intensive BP lowering amongst those who were more frail. In another post hoc analysis of HYVET, again there was no interaction between the frailty index, such that both the frail and fit elderly received similar benefit of treatment. However, patients who had dementia, were institutionalized, or had a standing SBP < 110 mm Hg were excluded from SPRINT; hence, these factors remain to be considered in the frail or elderly.

Thiazide diuretics have been the first line diuretics all along, though some of the largest RCTs which established the primacy of this class actually used thiazide-like diuretics (eg chlorthalidone in the Antihypertensive and Lipid-Lowering Treatment to Prevent Heart Attack Trial [ALLHAT]). Yet hydrochlorothiazide remains the more commonly used thiazide diuretic (rather than the longer-acting and more potent chlorthalidone and indapamide). Even NephMadness took this up in 2014 to emphasize the importance of choosing the correct agent. Bringing this to a head again, of course, was SPRINT, in which chlorthalidone was the preferred diuretic of choice. Thus, the new recommendation explicitly states that longer-acting (thiazide-like) diuretics are preferred over shorter-acting (thiazide) diuretics (grade B).

Combination therapy has long been known and accepted as providing superior BP lowering effect than monotherapy as well as helping in better adherence. Data from the Simplified Treatment Intervention to Control Hypertension (STITCH) trial, a cluster randomized trial of 45 family practices, reported a significantly lower BP (-5.2/-2.2 mm Hg) as well as achievement of targets (12.5% higher) with fixed dose combination pills compared to monotherapy. Hence, a new recommendation has been added with single pill combinations as an option for initial therapy (grade A). With respect to the specific choice, based on the Avoiding Cardiovascular Events through Combination Therapy in Patients Living with Systolic Hypertension (ACCOMPLISH) trial, as well as Heart Outcomes Prevention Evaluation (HOPE-3) and the aforementioned STITCH trials, either a combination of an ACEi/ARB + CCB or ACEi/ARB + diuretic were the preferred combinations (grade B).

Be wary of treatment of Hypertension in Hemorrhagic stroke

For patients with intracerebral hemorrhage in the hyperacute phase (in the first 24 hours), SBP lowering to < 140 mm Hg should be avoided because of an absence of benefit (relative to a target of < 180 mm Hg; Grade A) and some suggestion of harm. This new guideline is based on the Intensive Blood Pressure Reduction in Acute Cerebral Hemorrhage Trial (INTERACT-2) and Antihypertensive Treatment of Acute Cerebral Hemorrhage (ATACH-2) trials. There is no trial evidence, however, to define the actual target over 140 mm Hg.