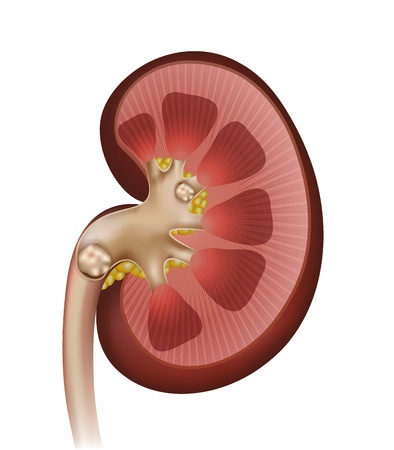 As a clinician, it is not uncommon for me to see a patient, a colleague, a friend, or even a family member who had a recent or previous bout of a kidney stone.

Nephrolithiasis is a common problem encountered not only in the nephrology office but also in primary care settings. Typically, patients present with symptoms of abdominal or flank pain with gross hematuria. The majority of patients with nephrolithiasis form calcium containing stones, which may be composed of calcium oxalate or calcium phosphate. Several risk factors, in addition to inadequate hydration, have been known to predispose to stone formation. Urinary composition, in particular, can be influenced by certain diseases as well as patient habits. For instance, urinary risk factors for calcium oxalate stones include higher urine calcium, higher urine oxalate, and lower urine citrate. Likewise, dietary risk factors include factors such as a lower calcium intake, higher oxalate intake, higher animal protein intake, lower potassium intake, higher sodium intake, or lower fluid intake.

One question that patients often ask is, “Can I change anything in my diet so that I don’t have any kidney stones again?” In fact, I was recently asked by a colleague, “Is a Mediterranean diet beneficial in this regard?”

A recent AJKD paper by Leone et al addresses this very question. This large prospective study is the first to explore the association between the Mediterranean dietary pattern and risk for nephrolithiasis. Over 16,000 patients were surveyed and analyzed with regard to dietary habits, lifestyles, and health conditions. All participants had no baseline diagnosis of nephrolithiasis, and had follow-up questionnaires. They were surveyed based on their intake of various aspects of the Mediterranean diet and scored by giving 1 point if their intake was greater than the sample median. Occurrence of nephrolithiasis was monitored over time and was self-reported on follow-up surveys.

The authors described an almost 40% reduction in the risk of nephrolithiasis in participants with higher adherence to the Mediterranean diet. Similar to the DASH diet, it has been shown to be associated with lower risk for nephrolithiasis. Let’s look at the specific components of this diet:

Fruits and Vegetables
The Mediterranean diet’s protective effect has been attributed to higher consumption of fruits and vegetables, which leads to increased fluid intake and subsequent increase in urinary dilution; as well as intake of fibers, phytates, citrate, antioxidants, and other nutrients that also potentially affect stone risk. This finding is in concordance with previously published studies.

Dairy Products
Dietary calcium intake has a protective role in the formation of kidney disease. More calcium in the intestinal lumen leads to lower intestinal absorption of oxalate, and thus lower urinary excretion of oxalate. The impact of dairy products (which are high in calcium) on the risk of nephrolithiasis is still unclear. Leone et al suggest that lower dietary calcium content from dairy products, “in combination” with increased intake of fluids, fruits, and vegetables, lead to a protective effect against risk of nephrolithiasis.

Animal Protein
It has been suggested that increased dietary animal protein intake leads to an increased acid load, thereby increasing urinary calcium and oxalate while decreasing urinary citrate. In addition, increased purine consumption leads to an increase in urinary uric acid, which is another risk factor for calcium stone formation. In this study, meat consumption was  not associated with the risk for nephrolithiasis. However, it should be noted that more than 50% of the cohort did not eat meat (36.7% were vegetarian and 14.9% were pescatarian).

As Leone et al indicated, however, this study is not without limitations. Aside from its observational nature, self-reported diagnosis was used to evaluate the incidence of nephrolithiasis. In addition, the actual kidney stone compositions were not determined so it’s difficult to determine the actual effect of the Mediterranean diet on various stone types.