One of the last sessions of ASN Kidney Week was “New Methods to Improve Cardiovascular Outcomes in ESRD Clinical Practice” or, in other words, as Tariq Shafi noted, it seemed appropriate to close out out Kidney Week with a session on sudden cardiac death.

The first speaker was Dr. Patrick Pun from Duke with a lecture titled Arrhythmias and Sudden Death: Role of Dialysate. He started with a pie chart from the USRDS which broke down the various causes of death in dialysis patients. He called it “the infamous pie chart of death.” Grim but true. Cardiac arrest represents roughly a quarter of all deaths. 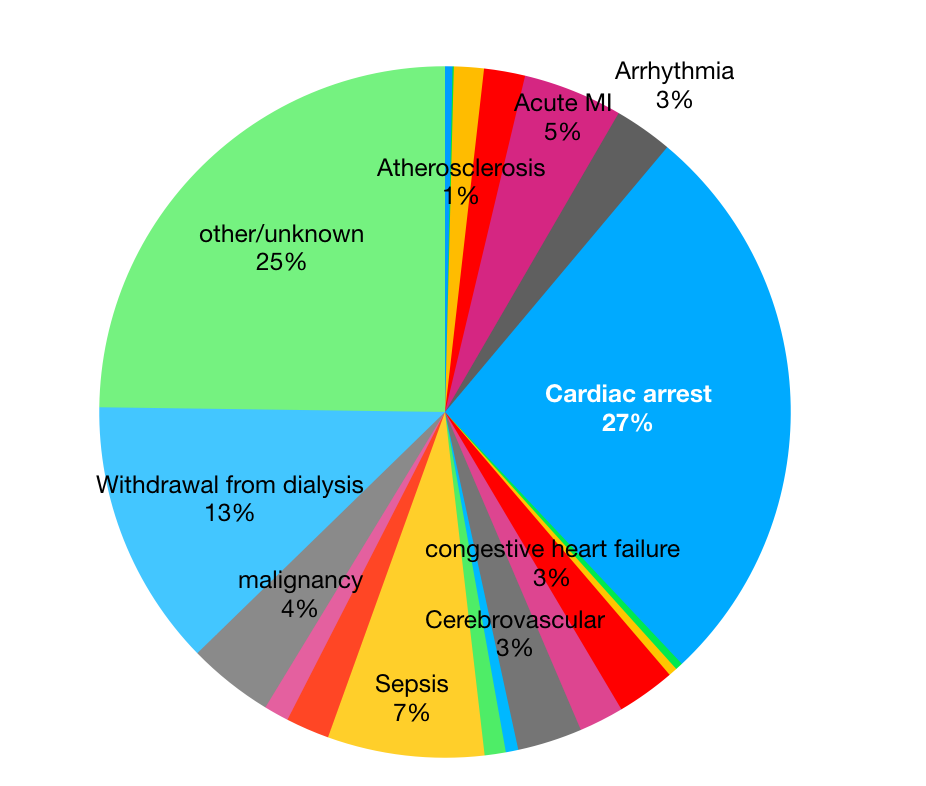 Then Pun showed Bleyer’s 2006 data that sudden cardiac death does not occur independent of the timing of dialysis but has a bimodal distribution, with peaks within 12 hours of starting dialysis and in the hours preceding dialysis after the two-day break over the week-end (Monday or Tuesday dialysis). 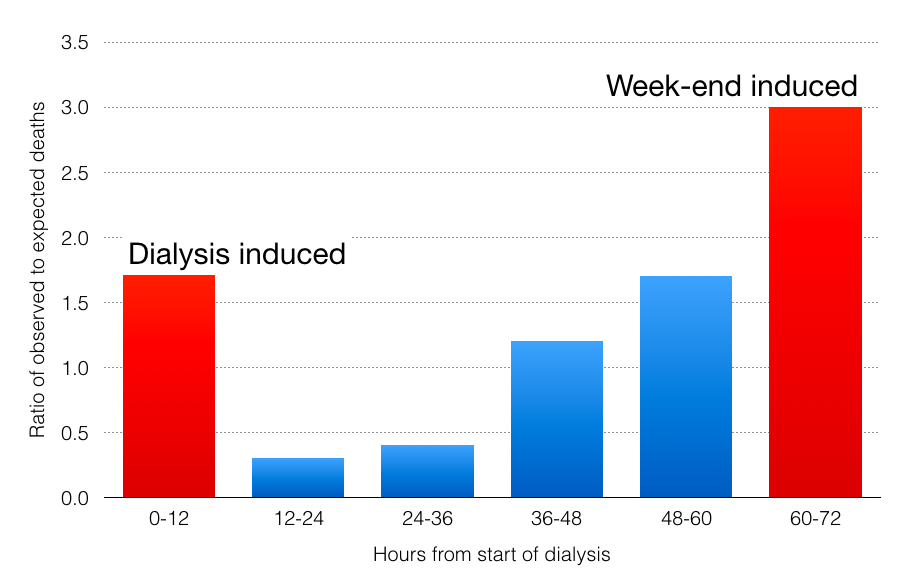 This sparked the theory that there are two factors that are driving sudden cardiac death:

Using that as his frame, he then did a deep dive on potassium with shallower examinations of calcium and bicarbonate.

What are the results of those abnormal potassiums? Pun et al in 2011 showed a U-shape curve for the pre-dialysis potassium for witnessed sudden-cardiac death in the dialysis unit. The lowest risk of arrest was with a pre-dialysis potassium of 5.0. Looking at all-cause mortality, potassium levels has a U-shaped curve with the low point at 4.6 to 4.99. Pun pointed out that the increased mortality with the lower potassium disappeared when the data was adjusted for case mix and malnutrition and inflammation. The mortality at high potassium was less affected by those adjustments. 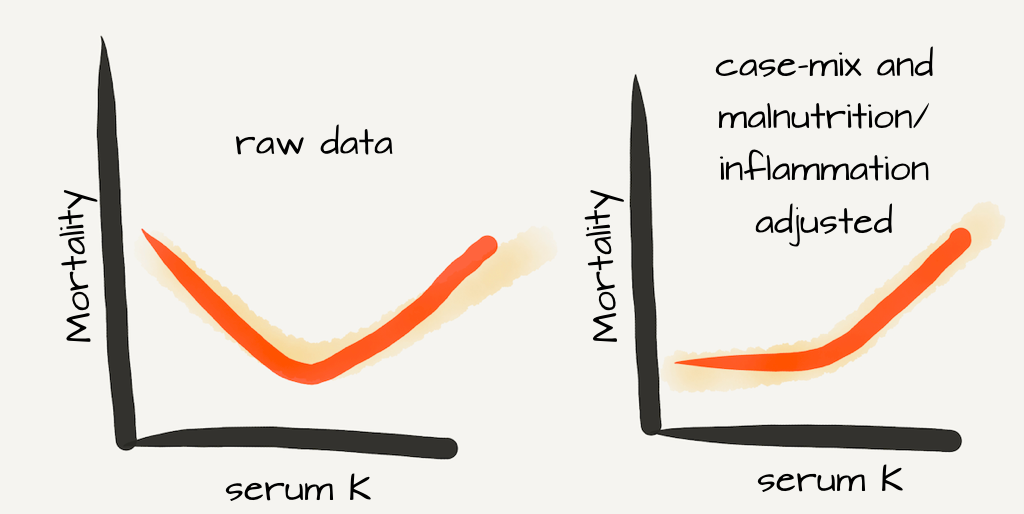 He closed out serum potassium with DOPPS data showing increased arrhythmia and mortality with pre-dialysis hyperkalemia, but no signal with high-normal potassium.

Pun wrapped up potassium by pointing out that there were no randomized controlled trials on potassium and that everything he has shown was retrospective in nature. He did note that in a RCT, fludrocortisone did not lower potassium in dialysis patients; however, bisacodyl did. Kayexalate works but has limited patient adherence. The newer potassium binding agents look promising but still lack large-scale studies to back that up. He noted that matching dialysate potassium to serum potassium holds promise and that employing the dialysis dieticians makes sense for this. He pointed to the experience of Lee and Mendelsohn who had success with this.

After this Pun went on to discuss calcium and bicarbonate. Unfortunately, this was less nuanced and more rushed as he tried to get done before the orchestra started playing and they hooked him off the stage. He started with data showing that as the calcium falls during dialysis, the QTc rises.

Pun did a matched case control study of 2,100 patients and found a 50% increase in risk of sudden cardiac death with a dialysate calcium below 2.5 mEq/L. He also found that the risk rises as the gradient between serum calcium and dialysate calcium rises. He pointed out that things are not simple and we need to be aware of interactions between electrolytes. He showed data from Genovesi et al demonstrating that the prolonged QTc of low dialysate calcium is ameliorated by higher potassium baths (3K had shorter QTc than 2K baths). He finished the calcium section by emphasizing that sudden cardiac death is only one of multiple outcomes affected by dialysate calcium and that avoiding SCD may conflict with other goals like avoiding vascular calcification. Studies in this area will need to look at the full breadth of outcomes rather than just focusing on QTc or arrhythmia.

The last bit that Pun examined was bicarbonate. He only had a few slides here. The first slide looked at the relationship with serum bicarbonate and mortality. Here there is a well documented association with increased bicarbonate and increased risk of death. The interesting part is that when you add case-mix adjusted risk the association develops the familiar U-shape and if you adjust for both case-mix and malnutrition and inflammation the original curve reverses and most of the excess risk is seen at low bicarbonate.

In the question section I asked why, if dialysis is 50 years old, some of these fundamental questions about the fundamental ingredients in dialysate have not been answered in a rigorous way? We have over half a million dialysis patients getting dialysis every week, and it is long overdue to figure these out in a rigorous and prospective manner. No more treating people using rearview mirror research.

.@kidney_boy: why don’t we have RCTs on dialysate composition? pic.twitter.com/KOB10m8lk8

Twitter responded with two questions to be answered with RCT in dialysis patients:

I think RCTs now made possible by new tools including implantable loop monitors and wearable patches to use as proof of concept. Stay tuned

Dr. Pun did a cracking job at wrapping up Kidney week with a great examination of some of the electrolyte abnormalities that may be harming our dialysis patients. I look forward to this talk next year with (hopefully) some more rigorous, and prospective data.