Unless you have been hiding under a metaphorical rock, the big news of the last few months have been the publication of a trial called Systolic Blood Pressure Intervention Trial (SPRINT) and its reverberations in the cardiology, nephrology, and primary care world. It was the top nephrology story of 2015, and the #NephJC team had an extensive discussion of the main trial itself. The trial influenced the Australian and Canadian guidelines, and most recently the American College of Cardiology/American Heart Association hypertension guidelines. But SPRINT remains controversial and not universally embraced. The European Society of Cardiology, the American Association of Family Physicians, and American College of Physicians have all raised concerns of increased adverse effects with the increased benefits. 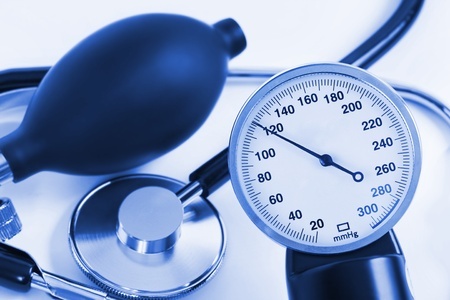 How does all this concern nephrologists? We know from NephMadness (despite #BlueRibbonFail) that in chronic kidney disease (CKD), hypertension matters more for cardiovascular disease than for renal progression. The benefit in all-cause mortality and cardiovascular outcomes that was seen in the main SPRINT population was also seen in the CKD subgroup (of ~2600 patients, making it larger than any previous CKD hypertension trial).

But what about the increased adverse events with intensive BP lowering that has many people in a tizzy? Those adverse events were right in our ballpark: more electrolyte abnormalities and more acute kidney injury (AKI). Increased survival is nice (number needed to treat of 90), but surely more AKI is something that needs to be explored, and now Rocco and colleagues provide us with excellent granular data for that purpose.

Previous dogma held that some small decrease (arbitrarily pegged at 25-30%) in kidney function, specifically after initiation of renin-angiotensin system blockade, is actually salutary. This was all blown apart by a meticulous study from the old country, which showed that any elevation of creatinine after initiation of these agents is associated with higher mortality in the long term. AKI events were already on the radar for intensive BP lowering as the SPRINT population was enriched with CKD and very elderly (age > 75 years). Additionally, about three quarters received renin-angiotensin blockade, and over a half received potent diuretics (chlorthalidone) which theoretically would put them at higher risk of AKI if volume issues arose. AKI here was defined with slightly modified KDIGO criteria (given that urine output was not available) into the three stages on the basis of creatinine change alone. Adjudication was done by a blinded safety team.

Moreover, how many of these AKI events ended up needing a hard outcome of temporary dialysis? A completely underwhelming 14/9361 participants (0.15%). The difference between intensive and control arms for dialysis requirement was 8 versus 6 patients, respectively. Most of these were due to volume depletion and/or hypotension and were for the most part reversible (only 5 patients developed ESKD: 2 in the intensive arm, 3 in the standard). 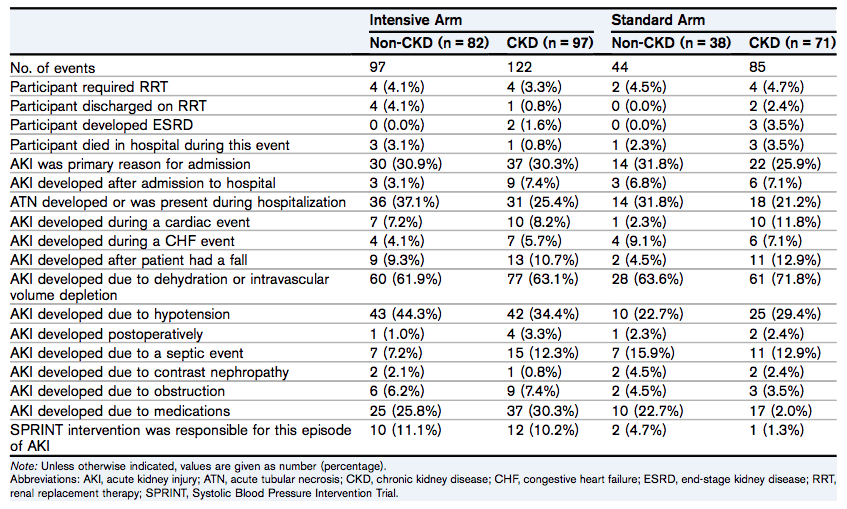 Changes in Kidney Function During and After the AKI Event Among Participants Stratified by Treatment Arm and Presence or Absence of CKD at Baseline. Table 3 from Rocco et al, AJKD © National Kidney Foundation.

Lastly, in multivariable analysis, apart from being in the intensive control group, being black, male, older, and having high cardiovascular disease were associated with higher AKI risk. 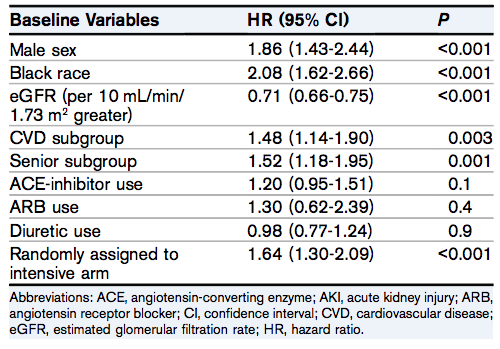 Episodes of AKI have consistently been shown to associate with poor outcomes, but in SPRINT the conclusion is not quite as clear.  Although patients that experienced AKI did have an increased risk for the primary SPRINT outcome of death, it also appears that those in the intensive arm had improved all-cause mortality despite the higher AKI event rate. It seems logical that if you have less “buffer” to deal with the AKI insult that your overall outcome would be poorer, but the lack of longer-term loss of eGFR in SPRINT is reassuring.

Always keep in mind who was studied in SPRINT: > 50 years at high cardiovascular risk. As a result, we should be cautious about extrapolating these conclusions to those without significant risk factors.  Clinicians should be aware that patients on an intensive BP lowering plan may be at higher risk for AKI, but that the mortality benefit may still be worth it for those at high cardiovascular risk.