Saturday at KIDNEYcon 2018 continued with a session focusing on nephrolithiasis. This featured a wide variety of lesser known topics including the exposome, neglected analytes on the 24-hour urine collection, and bread and butter topics such as preventing recurrent calcium stones and urologic interventions.

What is an exposome first of all? It’s the EXPOSE-ome, not the EX-posome. This is the measure of all the exposures of an individual in a lifetime and correlating those exposures to health. Like mapping the genome, we can map exposure from before birth and include insults related to environmental or occupational exposures. Just like environment/genes in CAKUT, the exposome is complementary to the genome when it comes to kidney disease.

In an intro case, Dr. Goldfarb presents a scenario of a young woman with calcium oxalate stones, primary hyperoxaluria, and worked as a mail carrier. We can tackle her oxalate, her urinary citrate, urinary calcium, but her occupation as a mail carrier prevented her from increasing fluid intake and being able to void frequently.

OCCUPATION: This “occupational hazard” is described amongst mail carriers, taxi cab drivers, truck drivers, and even healthcare workers! Infrequent Voiders Syndrome is described as nurses with “habitual suppression of the desire to void over a long period of time…resulting in overdistension of the bladder muscle which damages bladder sensation and increases the bladder capacity.” I’m pretty sure many of us felt this way during our intern years. “Taxi Cab Syndrome” is another one that even made a NYTimes headline, “Cabbies Gain Access to Restrooms.”

TEMPERATURE: How about temperatures? Cities are about 7-9 degrees warmer than their rural counterparts. With more and more of our population moving into urban cities, this may explain the rise in nephrolithiasis. This hypothesis is also supported by the higher incidence of kidney stones in warmer environments. There are numerous confounding reasons that preclude making this a causative link (occupation, income, diet, socioeconomic status, etc), but the hypothesis is certainly plausible.

ANTIBIOTIC EXPOSURE: The microbiome is one of the hottest fields out there (just see this AJKDBlog post or the team in NephMadness 2017). In kidney stones, the microbiome impacts intestinal absorption/secretion of ingested oxalate which translates into the amount of oxalate that our kidneys have to filter. This occurs via the bacteria Oxalobacter formigenes. Dr. Goldfarb presented data looking at patients who were positive for H. pylori infection at the time of upper GI endoscopy. 100% of patients had oxalobacter in their stool prior to antibiotic therapy. After treatment of the H. pylori infection with antibiotics, 70% of patients lost the oxalobacter, and over time there was a subsequent increase in risk of kidney stones in those treated with antibiotics.

75% of first-time stones are calcium oxalate, with another 18% calcium phosphate (or apatite).   As this is a heterogenous population, granular data on recurrence varies, but in general, 10% of patients have a recurrence at 2 years, and somewhere between 40-50% will have a recurrence in 10 years. This high recurrence makes prevention a mainstay of therapy. Let’s look at some of the interventions and the data behind them.

On to citrate. 4 out of 5 trials that tested citrate to prevent recurrence of kidney stones were effective. Patients did not have to be hypocitraturic to prevent stones.

If you’re looking for a nice recent review, the Zisman paper in CJASN 2017 is a good starting place.

This was one of the most eye-opening talks of the entire day for me. Dr. Asplin pulled our focus from clinical data and trials to pure kidney physiology. I am guilty of interpreting LithoLink 24-hour stone analyses and going right to the big red, bold numbers that put my patient at risk. Analytes such as ammonium, sulfate are often hidden behind, but when incorporated in the context of the urine pH, they can be incredibly useful.

The first mind-blowing fact that came up is that we can measure urinary ammonium. Litholink does it for all of their urine specimens and have shown reliability in measurement without degradation in the levels if the samples are not analyzed immediately. Also, our beloved urinary anion gap (which we have been teaching for years as an approximation to urinary ammonium) is a poor correlate. At least interpretation of urinary ammonium is what we have always believed it to be – an approximation of the ability of urinary acidification.

Here is a sample Litholink stone analysis report (sample patient – there is no real patient information here). Green is good, yellow intermediate, and red/bold increases your stone risk. (Side note – Dr. David Goldfarb can interpret this data even in black and white, which is the sign of a true stone expert). An important reminder on stone treatment in general is that there are no “normal values.” Even the “reference values” need to be interpreted with caution. An important teaching point is that if a stone former is having recurrences even with all their values in the green, they are still abnormal for this individual that continues to form stones. 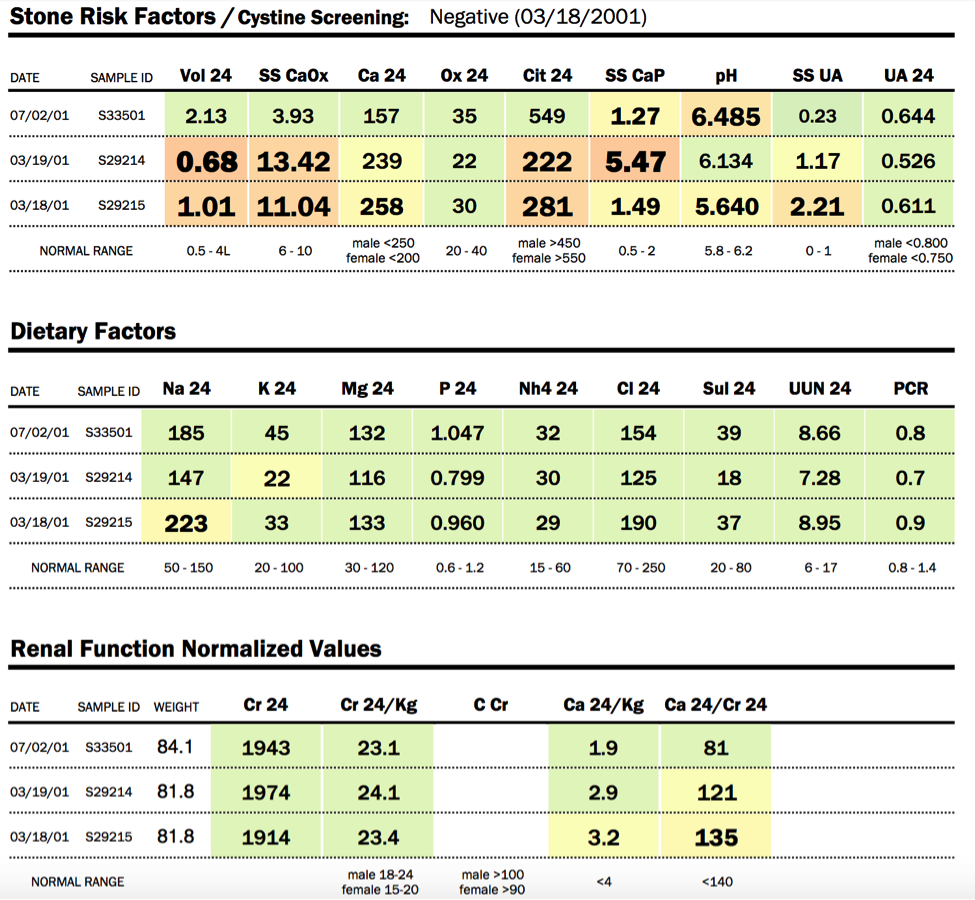 You can see here that some of the risk factors that we usually think about are quite easy to spot (urine volume, urine sodium, urine calcium, urine oxalate, urine citrate). Some of us might acknowledge the urine urea nitrogen (UUN) which can provide important information related to protein intake. Some of the really smart folks will look at urine potassium and urine pH if you are thinking about distal RTAs. But I’ll be the first to admit that I rarely ever looked at the urine ammonium or sulfate. And to be honest, I still don’t think I know exactly how to interpret these values, but I look forward to reading more about it when I get back.

Closing out the stone session was a urologist’s rapid-fire update on surgical interventions for nephrolithiasis. When should the surgeon get involved?

Onto the actual surgical techniques:

This wraps up the stone session for the 2nd day of #KIDNEYcon 2018. See the previous post on AKI and liver disease here.