Editor’s Note: We asked authors of Original Investigations to provide short nontechnical summaries that would briefly summarize what inspired their study, the basic approach taken, what was learned, and why it matters. We hope our readers will find this valuable in helping them keep up with the latest research in the field of nephrology. From the June 2018 issue:

Rapidity of Correction of Hyponatremia Due to Syndrome of Inappropriate Secretion of Antidiuretic Hormone Following Tolvaptan by Jesse H. Morris et al [FREE]

From the authors: Low levels of sodium in the blood (hyponatremia) is a common electrolyte abnormality encountered in hospitalized patients. It can lead to serious neurological damage such as brain swelling. However, when treating hyponatremia, practitioners must be careful to avoid correcting the blood sodium too rapidly, which can lead to permanent and disabling brain damage. Vasopressin V2 receptor antagonist drugs, such as tolvaptan, are now available for the treatment of hyponatremia, but optimal use of this medication is not yet certain for all clinical situations. In this study, we sought to identify factors that could help identify patients who are at risk for overly rapid correction of hyponatremia in patients with SIADH, a disorder of water retention. We found that low baseline levels of serum sodium and blood urea nitrogen are predictive of the magnitude and rapidity of rise in serum sodium during treatment with tolvaptan. These findings may assist clinicians to safely treat with tolvaptan patients with moderate to severe hyponatremia due to SIADH.

Editorial Tolvaptan for the Syndrome of Inappropriate Secretion of Antidiuretic Hormone: Is the Dose Too High? by Richard H. Sterns [FREE]

From the authors: Although the Kidney Disease Improving Global Outcomes (KDIGO) has developed a classification system for CKD, no data on children were included in its development. We used data from two large studies of children with CKD to develop a staging system based on level of GFR and proteinuria that can be used as a clinical tool to estimate the time until renal replacement therapy will be needed. In conjunction with clinical judgement, this staging system can help plan for the timing of a pre-transplant evaluation on dialysis catheter placement.

Blog Post Preparing to Fail: A Useful Tool for Predicting Time to ESRD in Pediatric CKD by Brian Stotter [FREE]

From the authors: Arteriovenous fistulae (AVFs) are the preferred type of hemodialysis vascular access, but failure of AVFs to develop sufficiently for use after surgery occurs frequently and results in prolonged use of dialysis catheters. We characterized AVF maturation within a national sample of patients already on hemodialysis in the United States. We found that female sex, black race, cardiovascular disease, peripheral artery disease, diabetes, frailty, longer duration of kidney failure, and use of other forms of vascular access at the time of kidney failure were associated with lower rates of successful AVF maturation. After accounting for all of these factors, the location of dialysis treatments was still an important predictor of AVF maturation, indicating a need for additional study to understand the healthcare provider-related factors that influence the rate of AVF maturation. 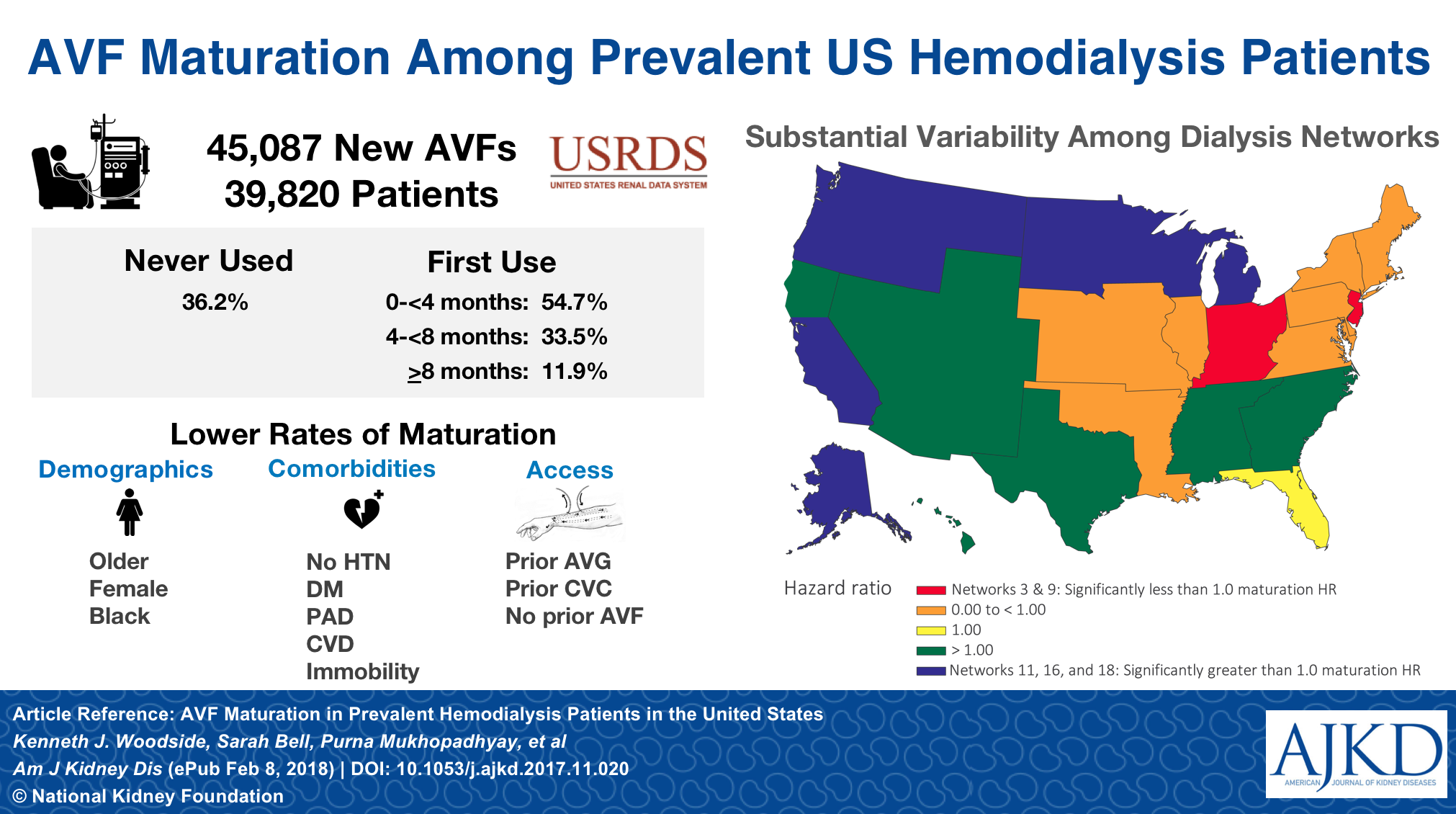 From the authors: Among patients with end-stage renal disease (ESRD), there are two major dialysis treatment options: hemodialysis (HD) and peritoneal dialysis (PD). Although survival has improved more rapidly in the PD vs HD population in the United States, obese patients have not been considered good candidates for PD. In a large US nationwide cohort of patients new to PD, obese patients experienced more peritonitis episodes, lost their residual kidney function more rapidly, and switched to HD faster, when compared to lean patients. Obese patients also underwent kidney transplantation less frequently. Nevertheless, survival was no worse in PD than HD among severely obese patients (i.e., body mass index ≥ 35 kg/m2), and PD patients experienced lower mortality than similar HD patients when they were less obese. Therefore, PD appears a reasonable treatment option for patients with ESRD irrespective of the presence of obesity.

From the authors: Peritonitis, infection and inflammation of the inner lining of the abdomen, is a serious complication for patients receiving regular treatments with peritoneal dialysis (PD) for kidney failure. This study examined whether clinical outcomes after an episode of peritonitis relate to characteristics of treating hospitals or centers (center effects) independent from characteristics of the patients themselves. The study included patients who commenced PD between 2004 and 2014 using data collected routinely by the Australian and New Zealand Dialysis and Transplant (ANZDATA) Registry and included 9,100 episodes of peritonitis among 4,428 patients treated in 51 different centers. The study found that dialysis centers with a higher proportion of patients receiving PD were more likely to be cured and were less likely to have complications (including removal of the dialysis tube, recurrence of infection, or a change to hemodialysis) than centers with lower proportion of patients receiving PD. Cure of peritonitis was more likely in centers where broad spectrum antibiotics were more frequently used. The study suggests that center characteristics may have an important bearing on the outcomes following peritonitis that is independent of patient characteristics among those undergoing regular PD treatments.

From the authors: End stage renal disease patients undergoing hemodialysis experience a high rate of death. Individualizing their therapy may improve outcomes. Cardiac troponins are strong risk predictors of mortality, but may accumulate in the blood in kidney failure because of the loss of their elimination by the kidneys. Modern troponin assays allow measurement of very low troponin concentrations helping to make the diagnosis of myocardial infarction. Nevertheless, their utility in defining the risk of death in hemodialysis patients is not well defined. The aim of the present study was to evaluate if differences in troponin concentrations in the lower portion of the range of values are associated with risk of death. Among 1,034 patients with type 2 diabetes mellitus undergoing hemodialysis, troponin T was measured using a high sensitivity as well as conventional assay. Gradations in troponin at the very low end of the range of values detected with a high sensitivity assay were associated with a 5-year risk of death. Measurement of troponin T using a high sensitivity assay may improve risk prediction in hemodialysis patients and may facilitate individualized therapy.

Factors Associated With Withdrawal From Maintenance Dialysis: A Case-Control Analysis by James B. Wetmore et al
From the authors: Elective withdrawal from long-term dialysis is an option for patients with end-stage kidney disease, but relatively little is known about what factors are associated with it. Using a large US database, we identified patients who withdrew from hemodialysis after having received hemodialysis for at least 1 year. We compared these patients to other dialysis patients who had similar durations of dialysis treatments, but who did not withdraw. We studied differences between these patient groups with regard to demographic factors, burden of medical illness, time spent in a hospital or skilled nursing facility (“institutionalization”), and a morbidity score based on use of durable medical equipment. Patients who withdrew from dialysis, compared with those who did not, were more likely to be older and female. Compared with white dialysis patients, black, Asian, and Hispanic patients were much less likely to withdraw. Higher levels of apparent morbidity, as indicated, in part, by insurance claims for durable medical equipment, were associated with a higher likelihood of withdrawal from hemodialysis. Overall, rates of medical events and institutionalization tended to increase in the months preceding withdrawal.

Validity of a Risk Prediction Equation for CKD After 10 Years of Follow-up in a Japanese Population: The Ibaraki Prefectural Health Study by Mitsumasa Umesawa et al

From the authors: Chronic kidney disease (CKD) is an important health problem. A risk estimation tool (risk score for CKD prevention) has been developed for Western populations, but not Asian populations. This study aimed to develop and validate prediction equations for CKD at 10 years in a Japanese population. We included 135,007 Japanese people who had completed annual health check-ups between 1993 and 1996. Participants were free from CKD (defined as CKD stage 3 or higher and/or proteinuria 2+ or 3+) and/or renal disease, and information was available from their health check-ups 10 years later. We included 58,855 people living in the northern region for development of prediction equations. The remaining participants were included in the external validation. The discrimination of the risk prediction equations was fairly good in men and women. The c-statistics for external validation were >0.8.

This Perspective was commissioned to celebrate the selection of CRIPSR-Cas9 from the Biomedical Research Region as a finalist in NephMadness 2017. 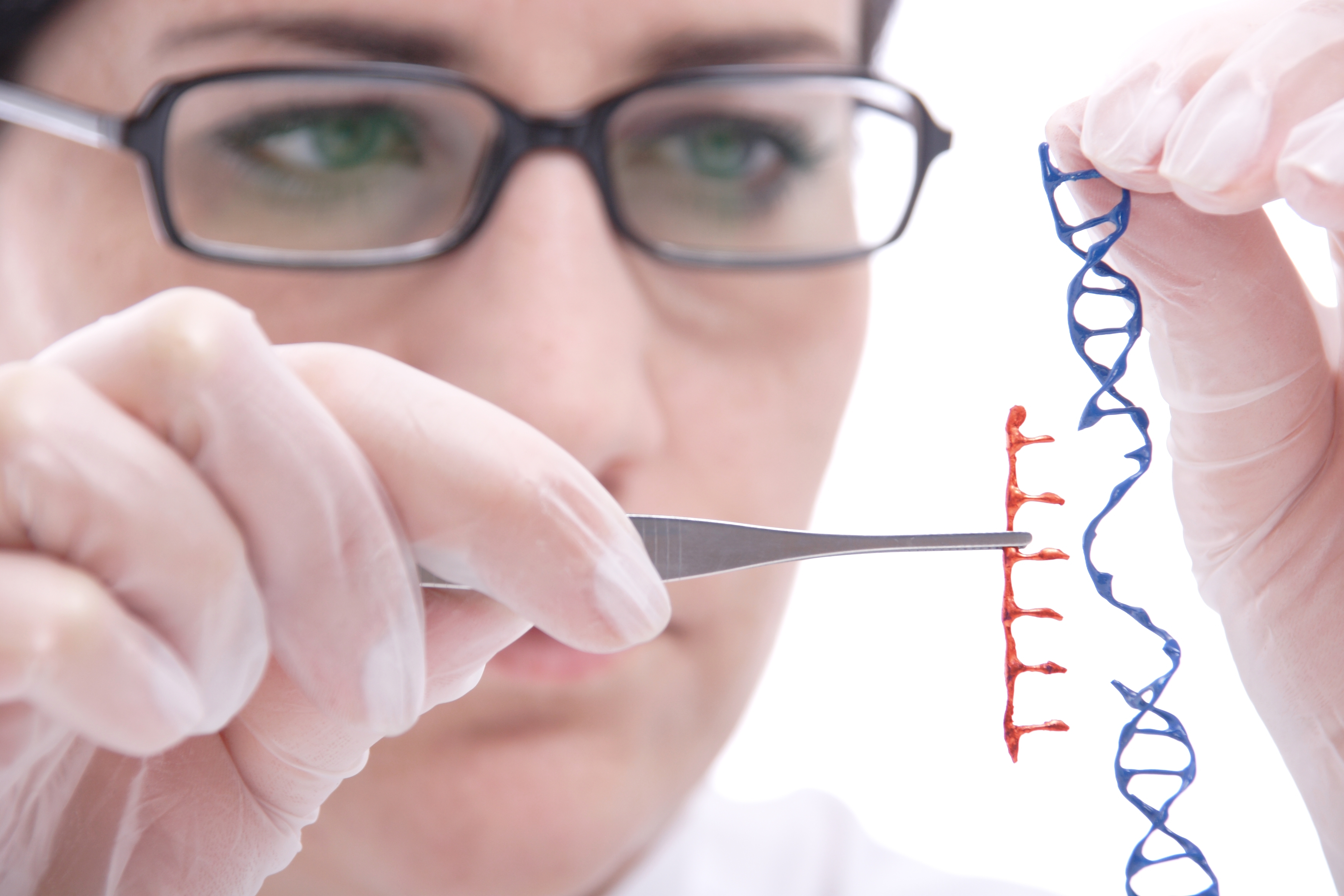 CRISPR is a nuclease guidance system that enables rapid and efficient gene editing of specific DNA sequences within genomes. In this Perspective, Cruz and Freedman review applications of CRISPR for the study and treatment of kidney disease. CRISPR enables functional experiments in cell lines and model organisms to validate candidate genes arising from genetic studies. CRISPR has furthermore been used to establish the first models of genetic disease in human kidney organoids derived from pluripotent stem cells. These gene-edited organoids are providing new insight into the cellular mechanisms of polycystic kidney disease and nephrotic syndrome. CRISPR-engineered cell therapies are currently in clinical trials for cancers and immunologic syndromes, an approach that may be applicable to inflammatory conditions such as lupus nephritis. Use of CRISPR in large domestic species such as pigs raises the possibility of farming kidneys for transplantation to alleviate the shortage of donor organs. However, significant challenges remain, including how to effectively deliver CRISPR to kidneys and how to control gene editing events within the genome. Thorough testing of CRISPR in preclinical models will be critical to the safe and efficacious translation of this powerful young technology into therapies. 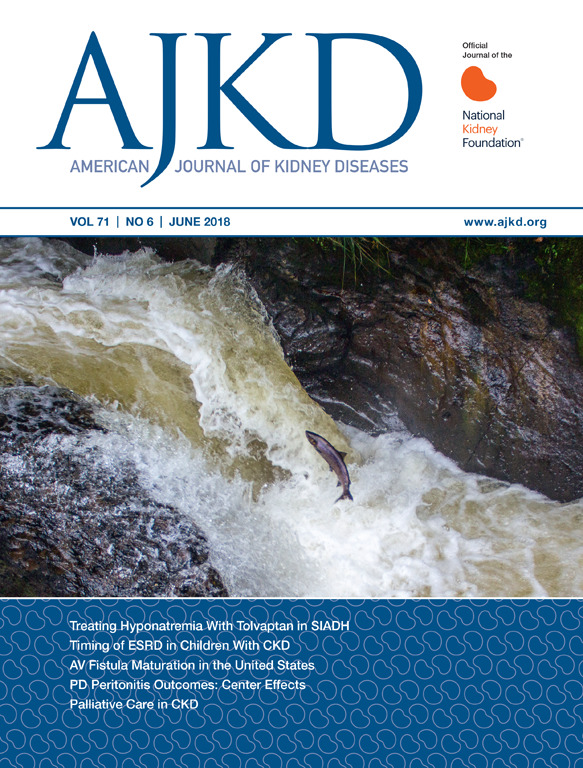 On the Cover: Salmon hatch in freshwater, then head to salty ocean waters to mature, remarkably returning yet again to fresh water years later to spawn. Along their journey, salmon must adapt to extreme changes in osmolality between their freshwater and saltwater habitats. Adaptations must also occur in the setting of clinical hyponatremia, requiring nephrologists to implement therapeutic strategies that avoid permanent and disabling brain damage that can accompany an overly rapid correction in serum sodium concentration. In this month’s issue, Morris et al examine factors that may help identify patients with SIADH who are at high risk for potentially dangerous rates of correction of hyponatremia when treated with vasopressin receptor antagonists.

The photograph “Buchanty Spout” is by ian_woodhead1, available under a CC BY 2.0 license.