Updates to Hypertension Canada Guidelines have been reviewed on the AJKDBlog in previous years (see 2015, 2016, and 2017). Changes in the 2018 guidelines that were just published are summarized below.

Blood Pressure Measurement
Automated Oscillometric Blood Pressure (AOBP) has been the preferred method for diagnosis of hypertension per HTC for a few years now. Its theoretical appeal includes reduction of the effect of patient anxiety, and reduction of variability from observer/healthcare provider experience and capabilities. They also standardize the interaction in terms of resting time and number of measurements. These instruments have now been used in large trials, such as SPRINT and ACCORD, and their use is increasing rapidly in Canada, where 4 different devices are now available, including the BPTru (which may not be available for long), OMRON HEM 907XL (used in SPRINT), the MicroLife WatchBP Office, and the PRO BP2400. These devices are all slightly different in terms of resting time, number of measurements, and intervals, which should be considered when using them. This leads to a new guideline, specifically intended not just for diagnosis, but for follow-up as well:

AOBP or Ambulatory BP Monitoring (ABPM)?
This was a famous match-up during NephMadness 2016. A recent systematic review suggests that AOBP cannot really supplant ABPM – there seems to be wide difference (study level mean differences of -9.7 to +9 mm Hg in systolic BP) with significant heterogeneity. Even data from the SPRINT ABPM substudy suggest a lack of agreement between the two methods.

On the other hand, trials using ABPM or home BP monitoring demonstrate that they decrease the use of BP-lowering medications, without any effect of clinical outcomes (left ventricular mass). Hence, these data lead to another new guideline:

Wrist BP Monitoring is Acceptable in Certain Situations
This undercuts a standard dogma – wrist BP monitors have always been frowned upon (see the results of a recent Twitter poll with 167 respondents, overwhelmingly rejecting wrist monitors) as being inaccurate. Why should this dogma be overturned?

Obesity is increasing globally – and it travels closely with hypertension. Obese individuals are particularly prone to the problem of ‘undercuffing,’ ie using too small or narrow cuff bladder for large arms that can lead to spuriously high readings. It is quite possible that wrist size does not vary as much or increase to the same extent as upper arm sizes in obese individuals. For such individuals, rather than perform a poorly done upper arm BP measurement, a wrist BP measurement may be the pragmatic solution.

This issue leads to the following recommendation:

“In patients with large arm circumference when standard upper arm measurement methods cannot be used, validated wrist devices (used with the arm and wrist supported at heart level) may be used for BP estimation (Grade D).”

Neprilysin Inhibitors Are In
A major breakthrough in management of heart failure (or maybe not, review this blog post and a subsequent debate) was the publication of the PARADIGM-HF trial, showing the significant increase in survival with sacubitril/valsartan compared to enalapril in heart failure with reduced ejection fraction. Neprilysin, a neutral endopeptidase, degrades several endogenous vasoactive peptides, including natriuretic peptides, bradykinin, and adrenomedullin. Inhibition of neprilysin increases the levels of these substances, theoretically countering the neurohormonal overactivation that contributes to vasoconstriction, sodium retention, and maladaptive remodeling. The combination of neprilysin inhibitors with an angiotensin receptor blocker (termed angiotensin receptor blocker-neprilysin inhibition, ARNI) reduces one of its major side effects, angioedema. The benefit of ARNI over enalapril was consistent in PARADIGM-HF in participants with hypertension as well as those without a history of hypertension, and in participants with baseline SBP above as well as in those with SBP below the median value of 122 mm Hg. Hence, a new grade A guideline:

“An ARNI combination should be used in place of an ACE inhibitor or ARB for patients with heart failure with reduced ejection fraction (< 40%) who remain symptomatic despite treatment with an appropriate dose of guideline-directed heart failure therapy (usually a β-blocker, an ACE-inhibitor, or an ARB, and where appropriate, a mineralocorticoid antagonist) (Grade A). Eligible patients must have serum potassium level < 5.2 mmol/L, eGFR ≥ 30 mL/min/1.73 m2, and close surveillance of serum potassium and creatinine (Grade A).”

Pregnancy and Hypertension Guidelines
A major advance this cycle is the creation and publication of a new set of guideline, tackling the vexing issue of hypertension in pregnancy. This was published as a separate paper earlier this month. It is a very useful review worth reading and saving as a resource.

Some of the challenges the writers faced included:

Most of the recommendations that follow are based on the Control of Hypertension in Pregnancy Study (CHIPS) trial data. This trial used oral labetalol, oral methyldopa which have long been the mainstay of BP management in this population. However, long acting oral nifedipine should not be overlooked – good data on its safety and efficacy is available from a trial, and subsequent systematic reviews. The guidelines state:

Priorities identified for the further development in the next cycle include addressing the management of hypertension in preconception as well as in postpartum women.

Finally, the Europeans came up with a new set of guidelines, too. A table summarizing the different guidelines can be found below: 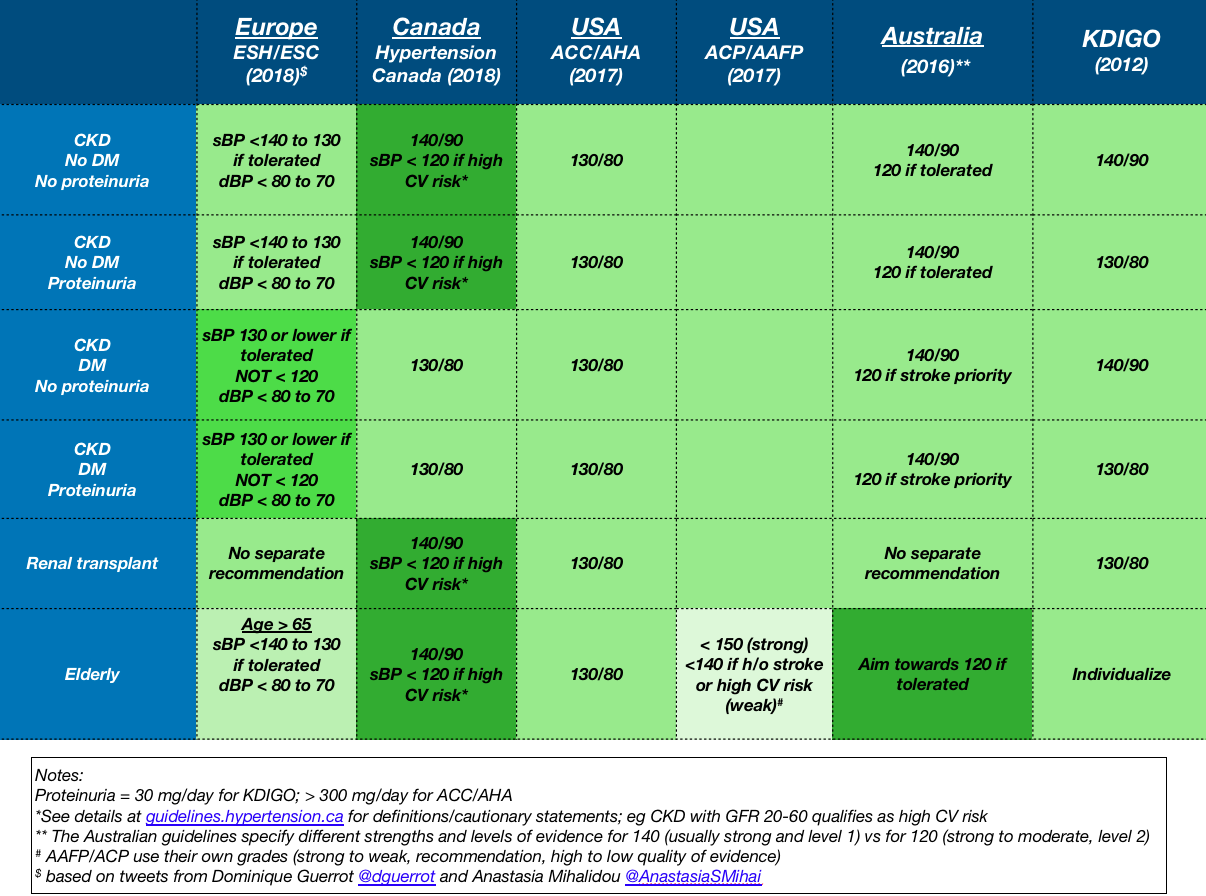 The Hypertension Canada (HTC, previously known as Canadian Hypertension Education Program [CHEP]) guidelines have been updated annually since 1999. The development process of the guidelines begins with a review of evidence and is compiled by many subgroups (blood pressure measurement, renovascular hypertension, and pharmacotherapy with coexisting heart disease, to name a few). If a change is necessary based on the evidence, this is reviewed again by an independent Central Review Committee. The process culminates with a consensus conference of the entire recommendation task force (RTF), comprising over 80 family doctors, internists, pharmacologists, cardiologists, nephrologists, endocrinologists, neurologists, and nurses, where each change is discussed, debated, and finally drafted.