Autosomal dominant polycystic kidney disease (ADPKD) is the most common inherited kidney disease, often results in the need for renal replacement therapy, and is the etiology for renal failure in 10% of dialysis patients.  Few treatment options exist to slow the progression of renal dysfunction in patients with ADPKD and research is ongoing to determine best practices for management of this life-altering diagnosis. Thus, it is exciting that tolvaptan, a vasopressin V2 receptor antagonist, has now been approved in the US (as well as Canada, Europe, and Japan) for slowing the rate of kidney function decline in patients with ADPKD. Two landmark trials (TEMPO 3:4 and REPRISE) recently demonstrated approximately 30% decrease in the rate of kidney function decline in early and late stage disease, respectively.

When considering treatment options for patients, efficacy and safety of the treatment are not the only considerations. Whether or not a patient can tolerate a medication and its potential side effects is paramount, and we have all seen medication adjustments in instances such as development of cough due to ACE inhibition or swelling due to a calcium channel blocker. Furthermore, physicians treating patients with tolvaptan for other conditions (such as for SIADH or congestive heart failure) have witnessed the polyuria that ensues and have counseled patients to increase water intake to prevent development of hypernatremia. In fact, in the TEMPO 3:4 trial, polyuria (with associated symptoms such as increased thirst and nocturia) was the most common reason for dose reduction or drug discontinuation.  Now that tolvaptan is approved as a medication to slow the rate of kidney function decline in ADPKD, physicians should be prepared to counsel and monitor patients appropriately in order to maximize the reno-protective properties, safety, and tolerability of the medication.

In an ideal world, we could identify patient factors which could predispose to common side effects, especially if these factors were in some way modifiable. In a recent paper published in AJKD, Kramers et al studied data from 27 patients with ADPKD who had been treated with tolvaptan between 2011 and 2013 to determine factors which were predictive of development of polyuria.  Patients in the study had a mean age of 46 years with a wide range of kidney function. Interestingly, data were collected and analyzed for each patient with and without tolvaptan, to allow study authors to determine baseline characteristics versus effects of the medication.

To understand the findings and conclusions of the study, it is helpful to remember a few concepts related to osmolar intake, urine osmolality, and the mechanism of action of vasopressin. Urine osmolar excretion is a function of osmolar intake. The more osmoles ingested, the more will be excreted into the urine. The actual urine osmolality itself refers to the degree of concentration of the urine, and this is affected by the degree of water reabsorption in the collecting duct. Tolvaptan, a vasopressin V2 receptor antagonist, is a competitive inhibitor that limits water reabsorption in the collecting duct, thus lowering urine osmolality. Stated another way, it acts to produce a maximally dilute urine.

In the study, patients were assessed at baseline, then again after 3 weeks of tolvaptan treatment. Their urine volume, urine osmolality, free water clearance, and osmolar excretion were measured at 3 timepoints: daytime, evening, and night. After treatment with tolvaptan, the median 24-hour urine volume increased to approximately 6L (compared with 2.5L at baseline). Similarly, urine osmolality dropped from 359 mOsm/kg at baseline to 139 mOsm/kg with tolvaptan, and returned back to baseline levels after washout. Total osmolar excretion did not change, which led to an increased free water clearance of about 3.5 L/day with Tolvaptan. 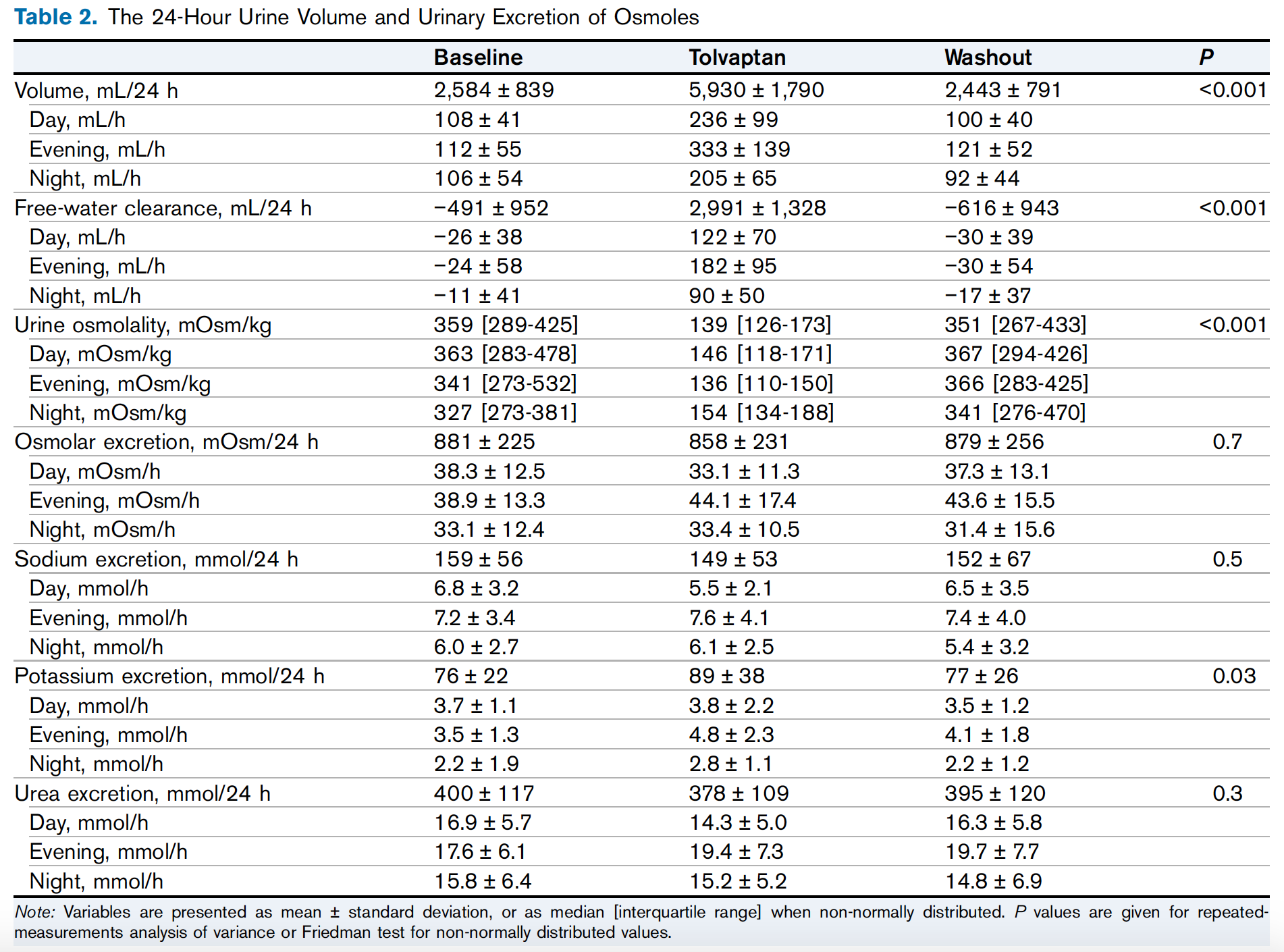 Patients with ADPKD are known to develop urine concentrating defects as their GFR declines. Thus, it is not surprising that the patients with higher GFR had a more marked increase in polyuria than patients with lower GFR who already had some degree of urinary dilution occurring. Due to the dilute urine induced by tolvaptan use, osmolar excretion was found to be the major determinant of urine volume.

Higher osmolar intake results in higher urine osmolar excretion, which does not affect urine volume in healthy individuals due to the ability of the collecting duct to concentrate the urine. As mentioned before, this process is impaired in patients with progressive ADPKD and is blocked when using tolvaptan. In the study, the urine volume per hour increased most during the evening period and was associated with a higher hourly osmolar excretion, likely reflecting a large evening meal. Patients should be counseled that once treatment with tolvaptan is initiated, osmolar excretion becomes the major determinant of their urine volume. Adjustments such as changing the timing of meals and amounts of osmoles ingested may make the medication more tolerable. Similar recommendations have been given to patients with nephrogenic diabetes insipidus due to a defective V2 receptor. 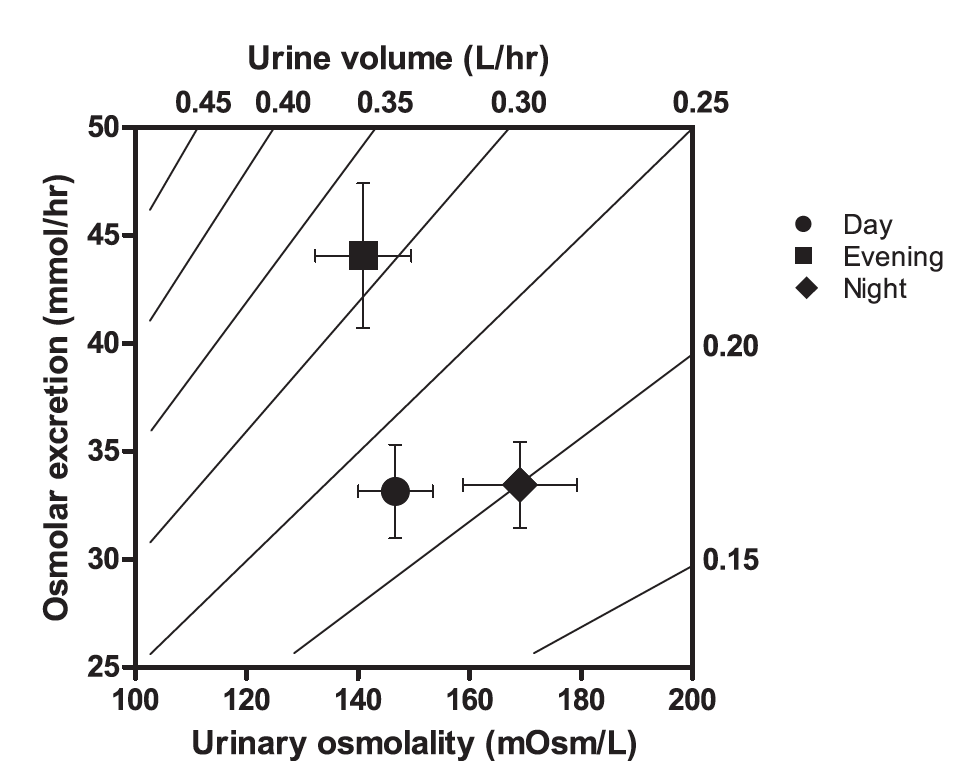 Although this was a small study, the variables assessed (GFR, TKV, urine volume) were similar to what we assess in clinical practice and were collected using gold-standard methods. Special consideration was taken to ensure patients with all degrees of kidney function were included, and patients were assessed both with and without the medication, allowing for comparisons such as osmolar excretion which can demonstrate whether the particular patient had consistent osmolar intake throughout the study. Taken together, this is an important study that demonstrates that the polyuria with tolvaptan can be significant, and gives clinicians a way to discuss this with their patients.