A 30-year-old man who died of a head injury was evaluated as a potential kidney donor. There was no history of hypertension, kidney disease, or diabetes mellitus. However, the serum creatinine was 4.8 mg/dl and a question was raised as to whether this could represent irreversible ischemic injury to the organ. At the time of organ recovery, the kidney appeared grossly congested and showed focal subcapsular hemorrhage. A wedge biopsy was performed and the transplant pathologist on call reviewed a frozen section.

The glomeruli in the sample all appeared normal. There was no evidence of thrombotic microangiopathy, which can be seen in the setting of severe brain injury due to release of thromboplastin-like substances from the cerebral cortex. The tubules did not show coagulative necrosis or infarction. However, there was evidence of mild tubular injury and the presence of intraluminal pigmented material that stained for myoglobin. 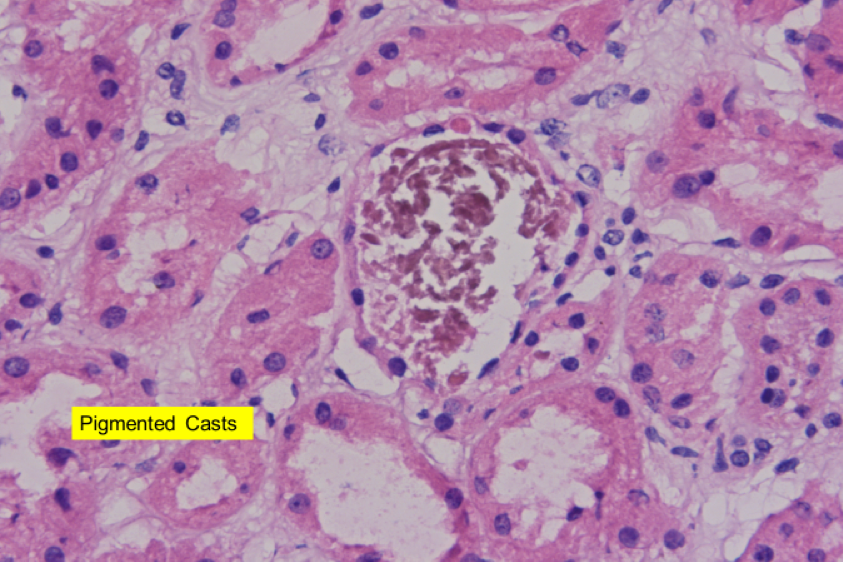 The tubules are dilated and show some cytoplasmic vacuoles. The lumen contains fragmented casts that have a reddish-brown color that is most often seen in red blood cell casts. 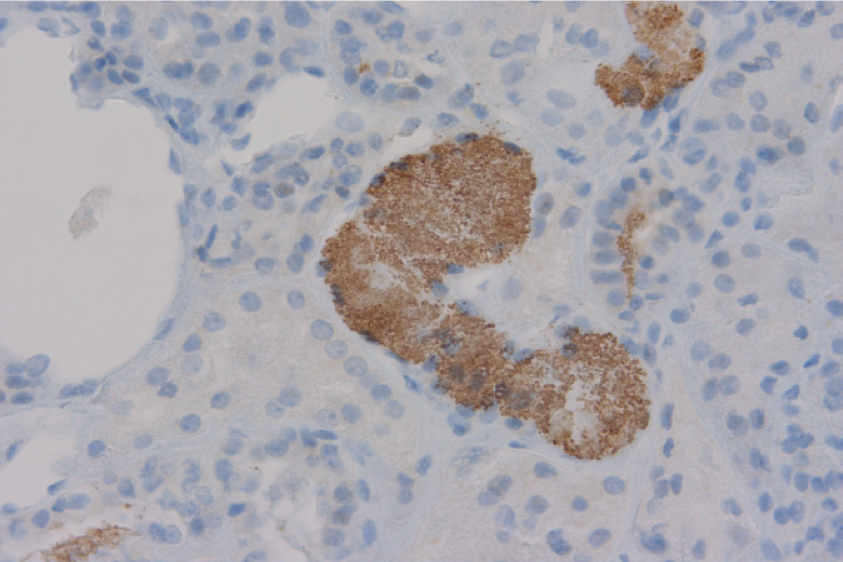 However, immunohistochemistry showed that the material represented myoglobin rather than hemoglobin.

A diagnosis of myoglobinuric nephropathy was made. The organ was accepted for transplantation and clinical follow-up of the kidney recipient showed delayed graft function, with creatinine returning to the normal range one month after transplantation.

Myoglobinuria can occur in the setting of crush injury to the skeletal muscle, myositis, prolonged immobilization, recurrent seizures, and other diseases. Medications are also an important consideration in the differential diagnosis, and offending agents include statins, ciprofloxacin, phenobarbital, and phenytoin. A history of drug abuse should also be sought, as cocaine, amphetamines, and ethanol have all been implicated.

Without immunohistochemistry, myoglobin casts can be difficult to distinguish from hemoglobin casts that are typically seen in hemolytic anemias and glomerulonephritis. If the casts have a greenish hue (so called bile casts), the patient may have obstructive jaundice, fulminant hepatitis, or decompensated cirrhosis. Thus, examination of a kidney biopsy in a patient with persistent acute tubular injury can provide a window into systemic diseases afflicting the patient.