Overview of Metabolic Acidosis in CKD

The presence of a mildly diminished bicarbonate in advanced chronic kidney disease (CKD) is one of the more polarizing topics in nephrology. Some would argue that the impaired acid-base homeostasis will lead to bone disease. Others would go so far as to say that the acidosis will increase the risk for CKD progression. Still others would argue that it’s just a number, and the treatment risks outweigh the benefit. A recent AJKD Core Curriculum by Kalani Raphael addresses this topic.

The Kidney’s Role in Acid-Base Regulation

When it comes to maintenance of pH, the kidneys and the lungs work together. The lungs eliminate volatile acid via CO2, and about 15 mol of CO2/day are excreted in steady state. The kidney has two roles – the proximal tubule reclaims filtered bicarbonate, and the distal tubule excretes ammonium (NH4+), and in doing so, generates a new bicarbonate. This latter role is what is called “titratable acidity” and is the response to increasing nonvolatile acid production. In general, the daily nonvolatile acid load is typically 50-100 mEq/day as a result of metabolism of sulfur-containing amino acids which are typically in animal protein. Fortunately, as we eat more cheeseburgers, our pH remains constant as our ammonium excretion increases.

The acid-base imbalance that occurs in CKD is a result of dietary intake leading to a nonvolatile acid load that exceeds the kidney’s excretory capacity. In early stages of CKD, ammonia production by residual nephrons can compensate for nephron loss, so typically metabolic acidosis is not encountered until the eGFR decreases to < 40 mL/min.

As eGFR decreases, one’s net acid excretion decreases despite a relatively constant daily acid load. This leads to a positive H+ balance and a progressively lower serum bicarbonate concentration as this buffer is consumed. The decrease in acid excretion occurs primarily due to reduced ammonium excretion, although other titratable acids (eg phosphate) also play a role.

The diagnosis is relatively straightforward, and can be based off a low bicarbonate concentration in the serum (typically < 22 mEq/L). Given the kidney’s role in acid excretion, direct sampling of pH via an arterial blood gas sample is usually not performed, and a presumptive diagnosis of metabolic acidosis can be made. The prevalence of metabolic acidosis in CKD based on the CRIC cohort was 13% in CKD Stage 3, and 37% in CKD Stage 4.

Effects on the Kidney

This is really the biggest question out there. The associations of metabolic acidosis with adverse bone and muscle health due to bone buffering and skeletal catabolism are much better defined than the impact on kidney health. However, there is evidence to support the hypothesis that kidney adaptations to facilitate acid excretion can themselves cause kidney injury. High tissue concentrations of NH3 activate the alternative complement pathway and may accelerate tubulointerstitial scarring. Upregulation of endothelin promotes intrarenal vasoconstriction and may also facilitate fibrosis.

Clinical data, however, is not quite as convincing in mild metabolic acidosis. The studies have mostly looked at patients with more diminished levels of bicarbonate (17-19 mEq/L), have been relatively small, and no large RCT has been performed. However, the smaller studies have shown lower creatinine clearance declines over 1-2 years in those treated with base vs control. It is also important to keep in mind the potential risks of base therapy, primarily fluid retention from sodium-based therapies (eg, sodium bicarbonate), or hyperkalemia with potassium-based formulations (eg, potassium citrate). 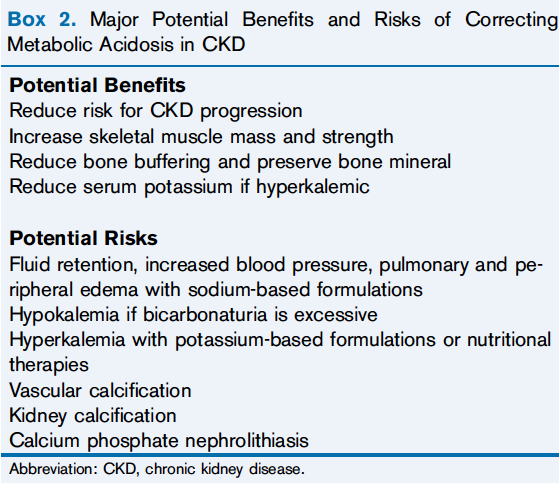 It goes without saying that dietary counseling to reduce acid load by limiting animal protein and increasing nutritional alkali with fruits and vegetables is recommended for most patients with CKD. The decision on using pharmacologic therapy can be considered only if there are drops in serum bicarbonate, although the exact time to pull the trigger on this is up for debate. The decision to initiate base therapy depends on many factors including the severity of metabolic acidosis, blood pressure and volume status, and potassium balance. We’ll end this piece with the author’s approach to the management of this in patients with CKD, along with the dose considerations for common alkalinizing agents. 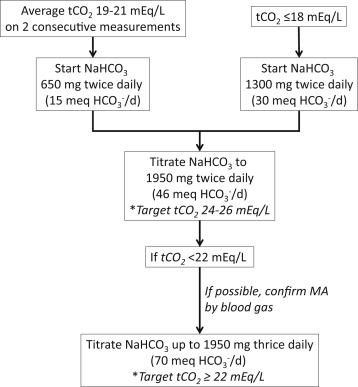 Author’s approach to the management of chronic metabolic acidosis (MA) in chronic kidney disease using sodium bicarbonate (NaHCO3). The NaHCO3 dose should be reduced if total carbon dioxide (tCO2) is > 26 mEq/L. The dose of HCO3− in mEq/day is shown in parentheses; the dose of citrate-based formulations can be approximated using these values. Adapted from Raphael, AJKD © National Kidney Foundation.