The “Successful Pregnancy Outcomes Across the Spectrum of Kidney Diseases“ session was held on Nov 8, 2019 at the ASN #KidneyWk in Washington, DC. 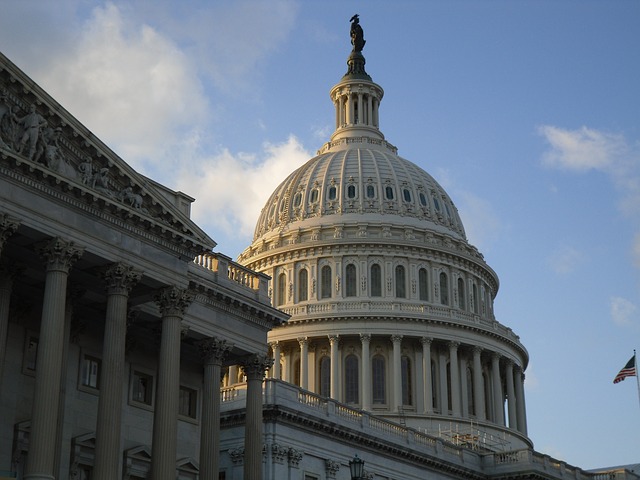 Pregnancy on dialysis is rare, but when it happens, most clinicians look to the experts. Here are some comments and review of the literature from the world’s experts at #KidneyWk 2019. They echoed similar themes that kidney disease is not an absolute contraindication to pregnancy. However, because of the high risk, communication, clear planning, and blood pressure control are important.

Dr. Piccoli reminds us of how little we understand about the effects of chronic kidney disease (CKD) and dialysis in regards to sexual and reproductive health. Of the few studies, many focus on medication side effects in male patients, but we know that CKD affects hormone levels in women as well. Only one third of surveyed nephrologists in Canada felt “confident” or “very confident” in their ability to discuss women’s health contraception, and the remainder had a “lack of interest” and/or “lack of confidence.”

Contraception counseling is important, and Dr. Piccoli discussed an algorithm where women with hypertension and/or those with CKD 3b through 5 should avoid combined hormonal contraception. CKD3b through 5 obese women should only be offered progesterone only pills. Patients with CKD 1 through 3a with no hypertension are free to have all methods of contraception with a recommendation for spermicide and/or intrauterine devices for immunosuppressed women. Additionally, a team approach should be implemented to include consultation with a gynecologist as well as further investigation if decreased libido is affecting a patient’s quality of life. 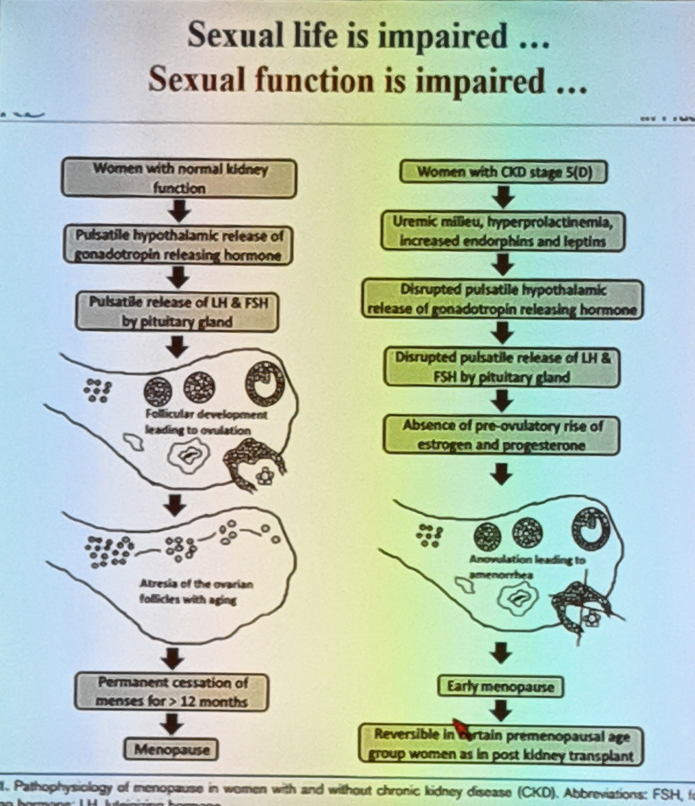 Regarding pregnancies, the incidence of live birth rates between patients on dialysis, post-transplant, and in the general population is 1:10:100. Patients with CKD and on dialysis have increased incidence of neonatal intensive care unit stay, small gestational age (SGA), c-section, early pre-term delivery, and preeclampsia. Mothers who undergo in vitro fertilization compared to spontaneous pregnancies are twice as likely to develop preeclampsia. Other dialysis subgroups more likely to become pregnant include lower socioeconomic, Native American, Hispanic, or black race; end-stage kidney disease (ESKD) due to glomerulonephritis, HTN, vasculitis, malignancy, and those on hemodialysis compared to peritoneal dialysis.

In general, most women with ESKD on dialysis are counseled to avoid pregnancies at all cost; however, Dr. Piccoli reminds us to recall the four medical ethics, and that the pillar non-maleficience are not in the best interest for the baby or for the mother’s kidney health. Even with this in mind, understanding our patient’s desires and open communication with a team and step-wise approach is advised. 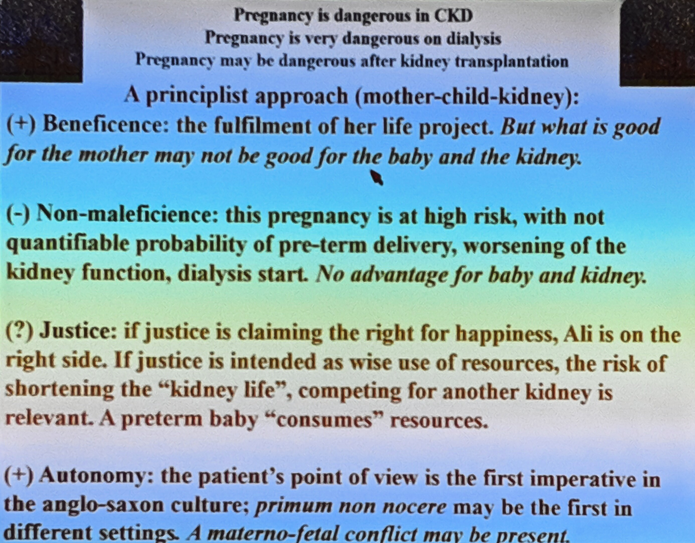 Although the majority of women on dialysis are not sexually active, 84% of women who are sexually active admit to changes in desire, arousal, lubrication, orgasm, satisfaction, and pain which affect their quality of life. Not to mention the physical changes when a patient starts dialysis such as fistulas and catheters. ANZDATA from 2013 indicate pregnancy on dialysis is more likely in younger patients who have renal failure from a glomerulonephritis (odds ratio 2.7) and twice as likely on hemodialysis (HD) compared to peritoneal dialysis (PD).

But, once a patient does become pregnant on dialysis, we can help to decrease the risk of pre-term delivery (defined as delivery prior to 37 weeks) and low birth weight. There is some data that suggests a low protein diet blunts the effect of hyper filtration and proteinuria, and in general the key to a higher live birth rate is clearance with a mid-week urea target of less than 35 mg/dL. Interestingly, Dr. Hladunewich mentions urea historically was used to induce abortions. In Toronto, nocturnal HD with 7-hour sessions for 5-6 treatments per week is recommended for pregnant patients on dialysis, and there are improved gestational age and birth weights when compared to the US. 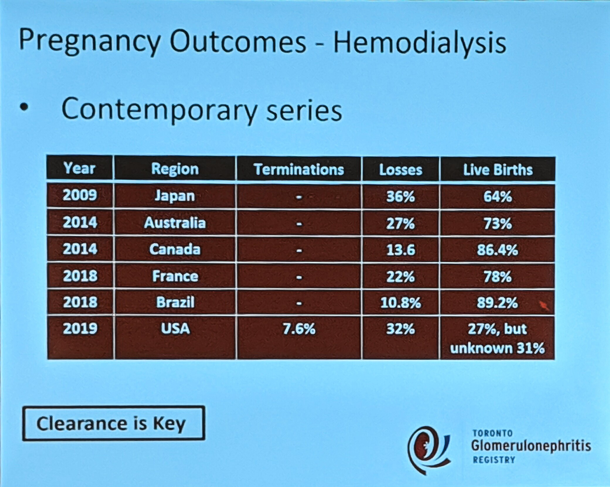 General recommended management is a minimum hemodialysis of 36 hours per week with close monitoring of electrolytes (specifically potassium and phosphorus). It is important to avoid intradialytic hypotension (ie a blood pressure lower than 120/70 mmHg) and significant anemia. Additionally, coordination with an experienced obstetrician is important as there is increased nuchal translucency seen in dialysis patients which can be mistaken for Down’s syndrome. Induction of labor is recommended to be planned at around 37 weeks gestation with cautious use of magnesium sulfate due to metabolism/clearance. 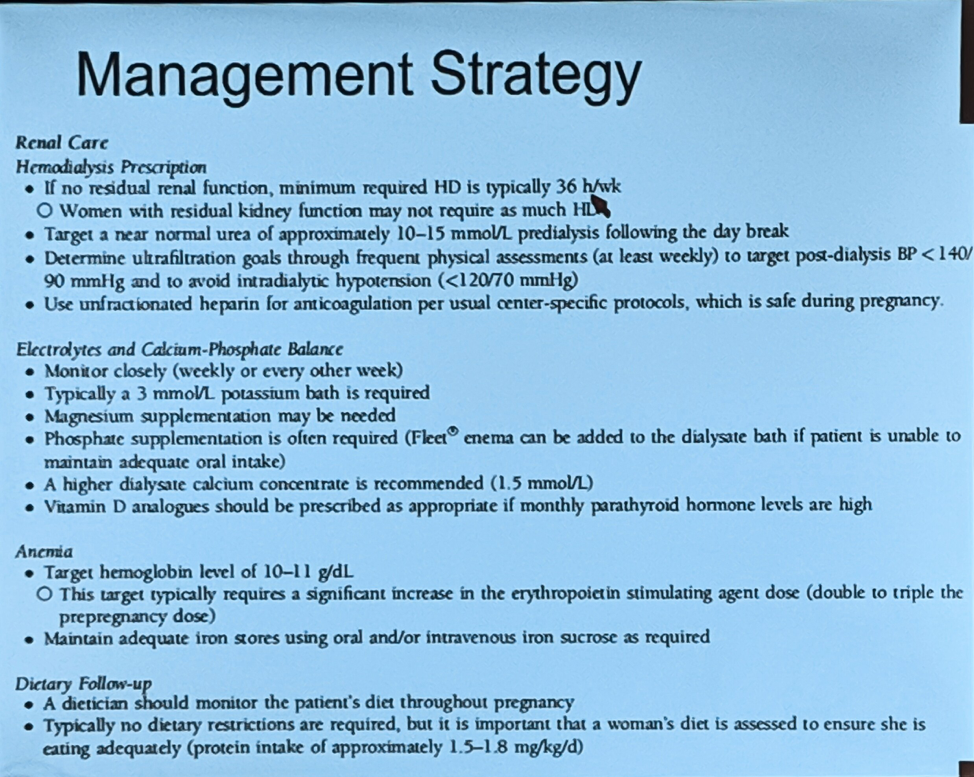 How about patients who have received kidney transplants? Some equate this to be restoration of normal fertility, but pregnancies should still be considered high risk. Post-transplant patients have a two-fold risk of preeclampsia compared to the general population. Studies looking at dialysis patients and their transplant counterparts show similar pregnancy and neonatal complication rates. 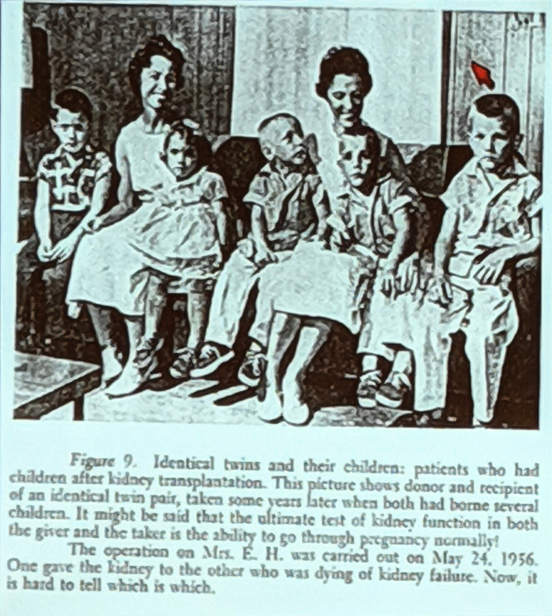 Also interesting is the varied advice given by US nephrologists regarding immunosuppression management: 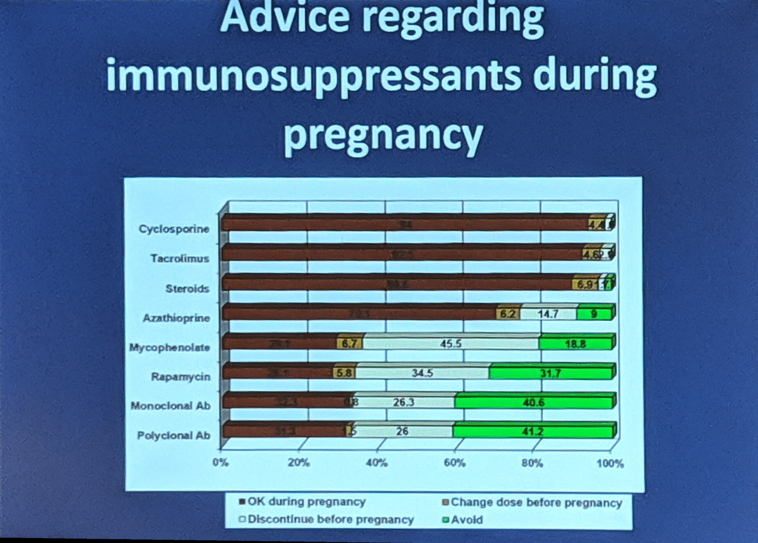 Most immunosuppressants are category B-C. Mycophenolate mofetil (MMF) and azathioprine are category D, and leflunomide is category X. MMF’s D-rating is related to increased spontaneous abortion in the first trimester, microtia, limb abnormalities, and cleft lip and palate. There is little data about mTOR inhibitors with a suggestion of high spontaneous abortion rate. Data on belatacept is limited. Tacrolimus levels will vary, as pregnant patients have an increased unbound fraction of the drug (even if whole blood levels drop!) due to changes in albumin and low red blood cell count. Increasing the dosage based on whole blood levels may lead to unsuspected elevations of tacrolimus levels. 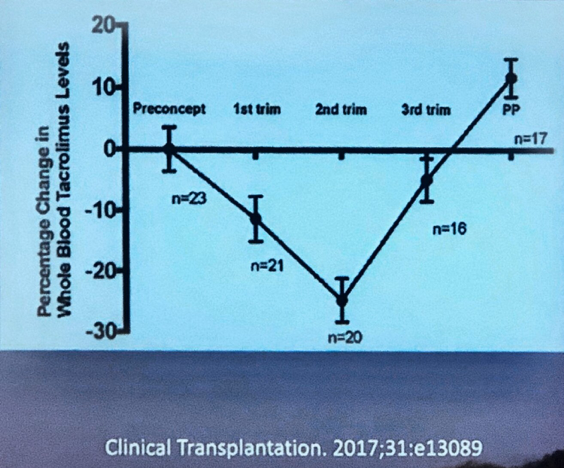 Additionally, transplant recipient patients are at high risk for complications during pregnancy compared to the general population. In a registry of women from 1967 to 2015 the differences are detailed below:

The adverse effect of pregnancy on the renal allograft in general is considered to be low depending on the pre-pregnancy creatinine. There is a 5.9% risk of graft loss in patients who become pregnant which is similar to the general transplant population with no change in rates of acute rejection. Additional stratification shows that patients with a creatinine higher than 1.2 mg/dL compared to those with a creatinine lower than 1.2 mg/dL are more likely to develop graft loss any time post-partum (36.8% compared to 11.1%) and graft loss at 3 years (21.1% compared to 0.0%). Finally, regarding breastfeeding, the 2005 AST consensus is that breastfeeding should not be viewed as an absolute contraindication, although it should be realized that tacrolimus levels can be detected in babies who are breastfed.

Dr. Lightstone mentions the most common GNs during pregnancy are relapsing minimal change, lupus nephritis, and IgA nephropathy. Less common would be vasculitis, membranous, and hereditary diseases such as Alport’s disease. Ultimately, she urges that blood pressure control is paramount and it is all about the timing. In women with progressive disease who want to conceive, control the disease as best you can, and then plan for pregnancy. In diseases that are relapsing, you want to see disease in remission for at least 6 months.

Dr. Lightstone says that adequate pre-conception counseling usually takes around 45 minutes. It is vital to ensure that patients understand that pregnancy may increase their need for renal replacement therapy. Additionally, you need to ensure that proteinuria is stable off ACEi/ARB therapy and that meds like cyclosporine be on hold for at least 6 weeks. In addition to folic acid, patients should receive aspirin to minimize the risk for preeclampsia and thromboembolic prophylaxis if there is nephrotic range proteinuria. Plaquenil reduces the risk of neonatal heart block in lupus patients by 50% and can also reduce the risk of flares.

If you suspect a pregnant patient to have a new undiagnosed glomerulonephritis, you can either try to diagnose during the pregnancy or wait until post-partum. If the presentation is less than 24 weeks, the etiology is usually assumed to be glomerular. She recommends an initial work-up of virology, HBV to include core antibody, HCV, and other autoimmune serologies, but if all are negative and the patient has normal renal function, normal blood pressure, and non-nephrotic range proteinuria, she recommends monitoring during pregnancy until post-partum. For proteinuria beyond 24 weeks, preeclampsia should always be considered. Biopsy is typically not done beyond 20-21 weeks due to increased risk of bleeding. 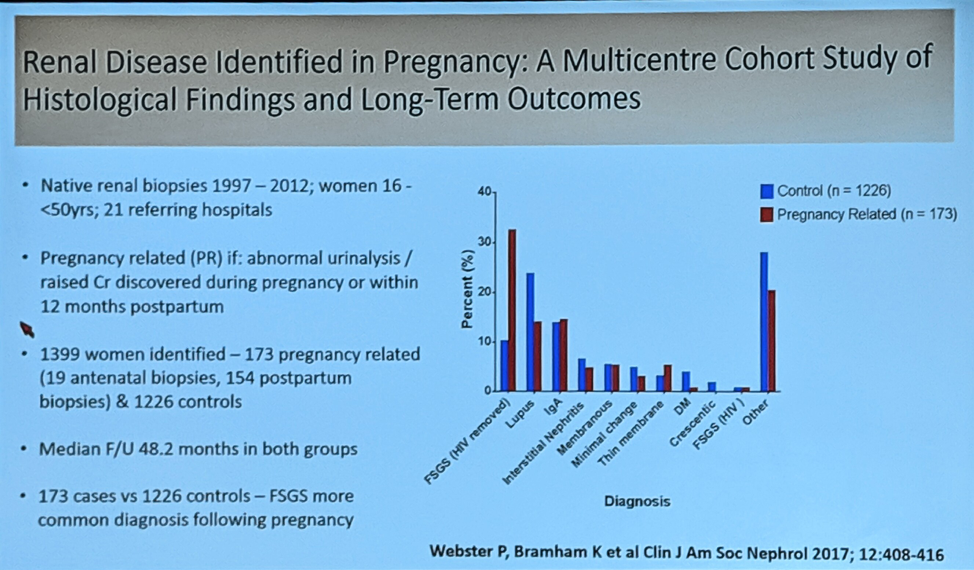 For patients who may need immunosuppression therapy during pregnancy, her go-to is a calcineurin inhibitor (CNI) due to the low side effect profile. Azathioprine can be considered based on TMPT levels, and MMF can be offered in the second and third trimester if needed. Rituximab therapy in the year prior to conception did not reduce B cell counts in the baby, but if given during the second or third trimester may deplete the baby’s B-cells for 3-6 months. Prednisolone is inactivated by placental enzymes and does not cross the placenta, but metamethasone and dexamethasone does, and may be helpful in neonatal heart block.

Overall care of these patients is challenging, but with vigilance and a team-based approach, many women can achieve their goals of a safe and healthy pregnancy despite these barriers.