With the Advancing American Kidney Health Initiative (AAKHI), there has been renewed interest in home dialysis, particularly peritoneal dialysis (PD) as a modality of kidney replacement therapy.

With hemodialysis, vascular access is recognized as the Achilles heel, whereas in PD a major issue is the dialysate itself. Historically, the many pitfalls of utilizing glucose as an osmotic agent have been widely recognized, e.g. hyperglycemia, hyperinsulinemia, hyperlipidemia, and weight gain. In addition, the contribution of intraperitoneal glucose to peritoneal membrane fibrosis and vasculopathy should be underscored.

Icodextrin, a soluble glucose polymer, has been used as an alternative osmotic agent. Its use has been associated with improvement in fluid status due to its sustained transcapillary ultrafiltration during the long dwell period and is believed to lead to peritoneal sodium removal and maintenance of sodium balance; it also induces decreased production of advanced glycation end-products, which has the potential positive and long-term effects on cardiovascular status and peritoneal membrane function.

Looking at the published evidence on icodextrin versus glucose-only PD regimens, there are 3 notable systematic reviews of randomized controlled trials (RCTs) that are of interest. In a recent systematic review of RCTs, Goossen et al compared once-daily long dwell icodextrin versus glucose in patients with ESKD who are on PD. However, there are significant limitations to the interpretation of their findings. They postulated that some important evidence may have been excluded, such as unpublished data, studies published in non-English languages, and studies that have undergone regulatory review but not academic peer review. 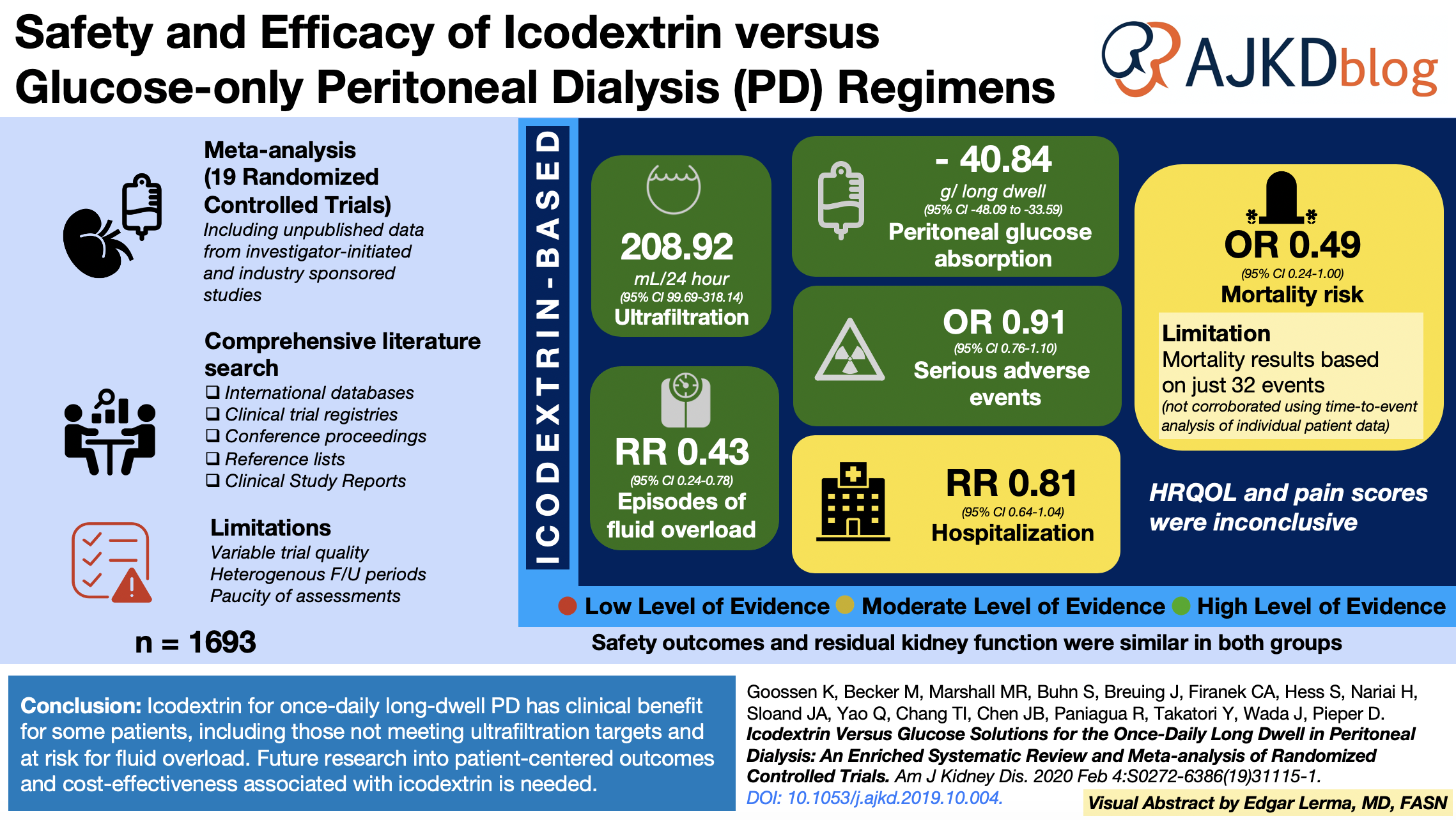 Overall, icodextrin was found to have significantly more clinical benefits compared to glucose in this meta-analysis. Many of the primary outcomes were based on moderate to high-level clinical trial evidence, with all secondary outcomes being of high-level clinical trial evidence. Icodextrin led to an improvement in ultrafiltration, indicated by fewer episodes of fluid overload. A risk reduction in mortality was likely to be seen with icodextrin-containing PD versus glucose-only PD. Although icodextrin-containing PD was shown to result in lower peritoneal glucose absorption, this did not directly translate to alterations in fasting plasma glucose and hemoglobin A1c levels. Both groups showed similar safety outcomes and residual kidney function; the reported health-related quality-of-life and pain scores were inconclusive. 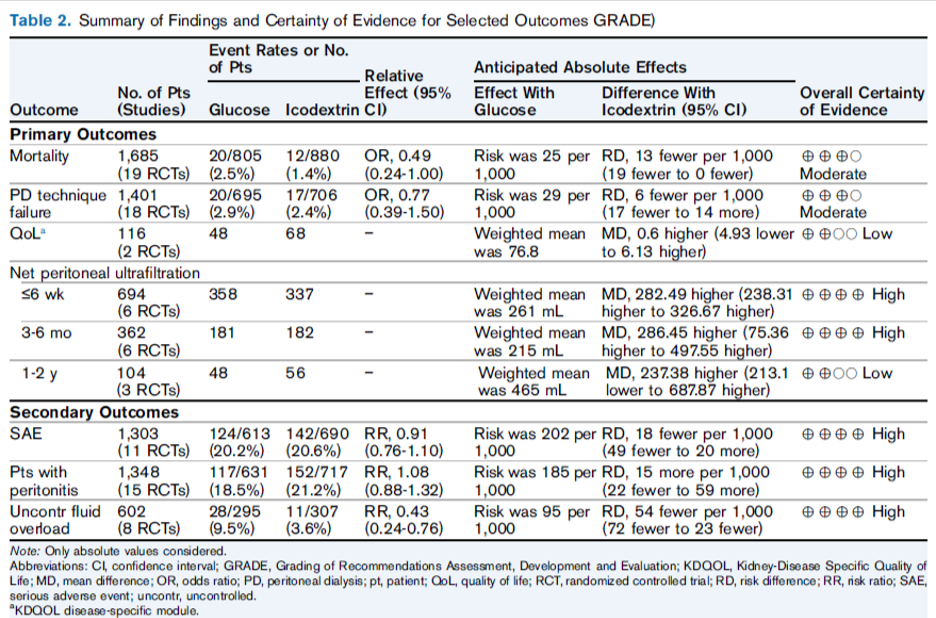 Goossen et al demonstrated that the use of icodextrin resulted in:

Importantly, we must remember that meta-analysis quality is only as good as the trials included. Generalizability may be limited because many patients receiving PD may not be appropriate for participation in clinical trials. Nonetheless, the data here show that icodextrin dialysate is a tool to improve PD outcomes for appropriate patients.

We think that the findings related to carbohydrate metabolism were quite interesting, particularly in this area, where the use of icodextrin was believed to be significantly advantageous over glucose containing PD regimens. 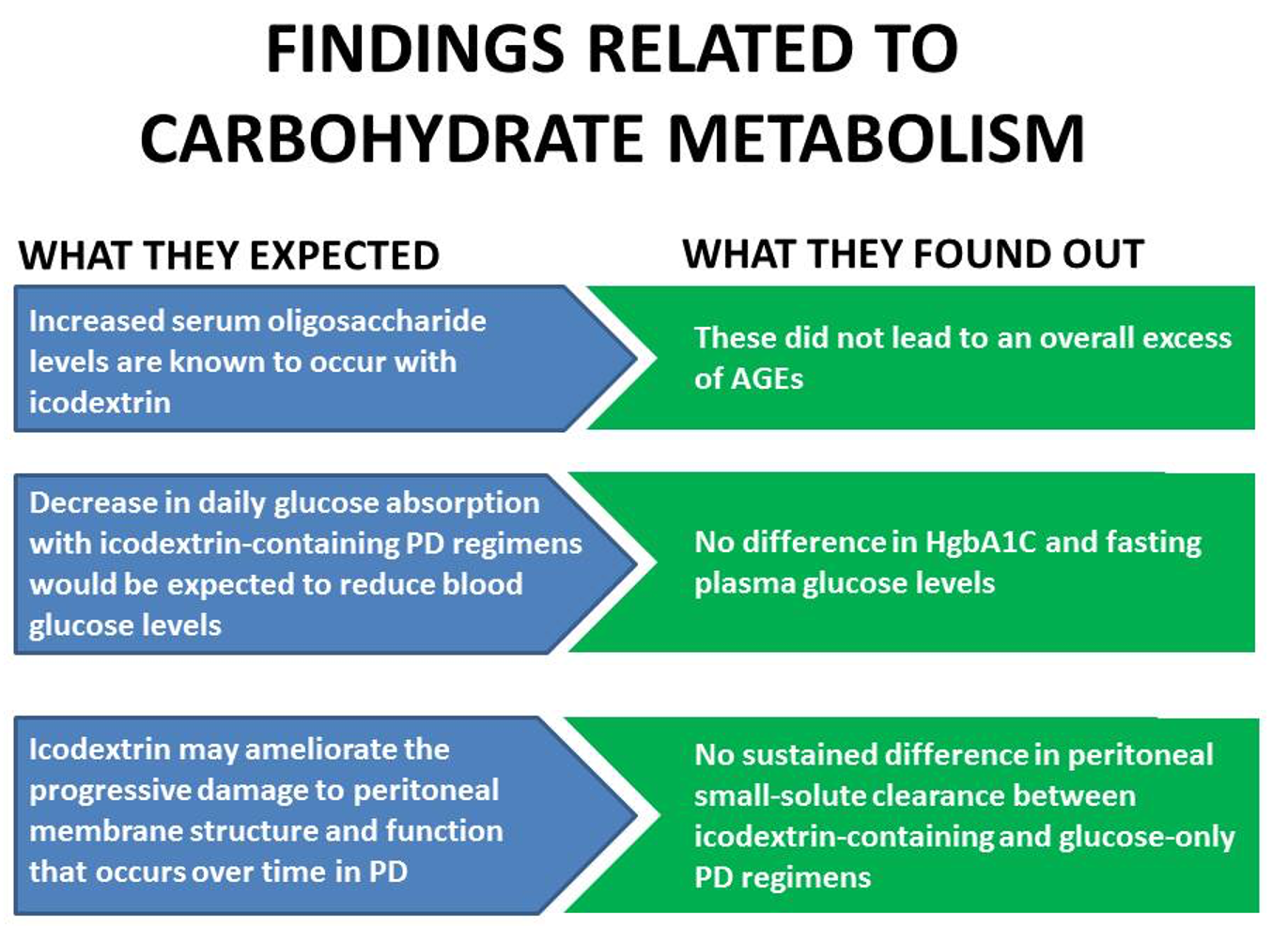 Recognizing some of the limitations of this review, quality varied among the included RCTs that were analyzed. One also has to recognize that with published RCTs (usually with restrictive selection criteria) being the main focus of this review, the patients involved may not represent the general population that we typically encounter in daily clinical practice. Goossen et al also did not look at other important outcomes such as blood pressure control, antihypertensive medication use, and ECF volume. The authors conclude that “there is an urgent need to improve PD outcomes and reduce associated costs, and icodextrin provides a possible opportunity of increased survival, with a decrease in important complications such as fluid overload.”