The prevalence of chronic kidney disease (CKD) in Asian countries is reported to be among the highest in the world, and as of 2016, has emerged as one of the leading causes of death. The Philippines in particular has experienced a large rise in the prevalence of dialysis with an approximate increase of 400% over the past 10 years. In fact, kidney failure (and earlier stages of CKD) has become one of the leading causes of hospitalization and is now the tenth leading cause of mortality in the country. Despite its high prevalence, it unfortunately remains a low priority in most low and middle income countries.

As I read the perspective by Tang et al published in AJKD on dialysis care and funding in Asia, I couldn’t help but reflect on my experience as a nephrology fellow and compare the state of health care for patients with kidney failure and earlier stages of CKD in my country to that of our neighbors. 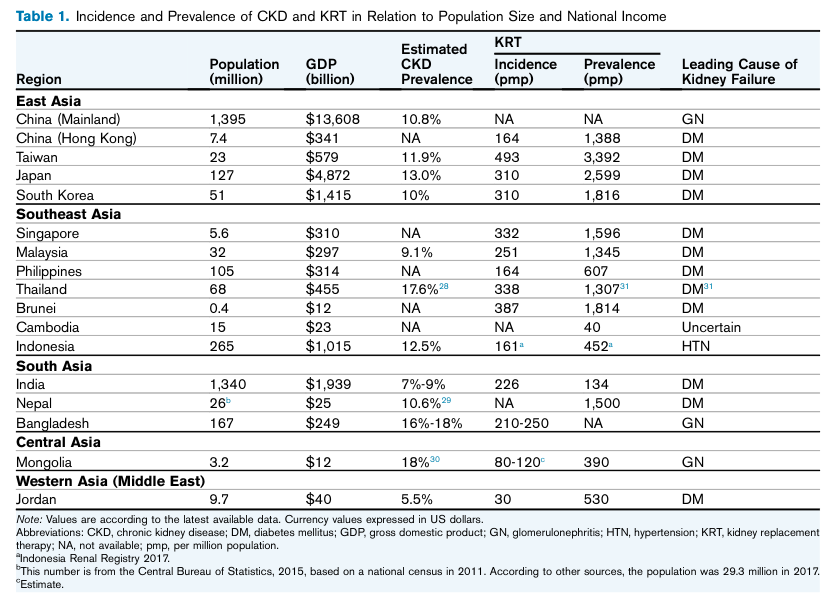 I was brought back to one gloomy November morning. It was 5 AM and I woke up to the sound of my phone ringing constantly. The internal medicine resident apologized for waking me and asked if he could get a consult on a patient with ESKD on maintenance hemodialysis. Prior to this, I had already received 7 other consults for patients on hemodialysis who arrived at the ER for various complaints:

But this 5 AM consult was different. She was a cheerful, patient woman in her seventies brought to the emergency room by her two teenage grandchildren because of edema which started from her feet and reached up to her abdomen. The patient was wheelchair-bound, unable to carry the weight of her body and legs. You could tell she had some difficulty breathing because she paused after every few words to answer my questions, but despite my prodding, she insisted she felt fine. She, too, had a non-tunneled internal jugular catheter on her neck. She jokingly called it her phone antenna so she could call her children who were working on cruise ships at that time. I asked when it was placed, but she couldn’t remember. I asked when she last had dialysis. She again stated that she could not remember – but her grandson quickly replied and said it had been almost two months ago.

At this point, I had received 8 new consults in 24 hours – all involving patients who missed their HD treatments. Though they all had varying symptoms, they shared one story: it was the end of the year, which meant they had already used up their 90 free HD sessions covered by the Philippine Health Insurance Corporation and couldn’t afford to continue their treatment for the rest of the year.

As a fellow at the Philippine General Hospital, the sad truth is that this is a common predicament among our patients. The national university hospital, located in the capital city of Manila, is one of the main referral centers of the Philippines and provides care to more than 600,000 patients annually, most of whom are indigent Filipinos from all over the country.

In their Perspective, Tang et al offer a glimpse of the disparities in health care policies, implementation, resource availability, and allocation among many Asian countries. Government subsidy for kidney replacement therapy was virtually unheard of until the early 1990s in countries like Malaysia, Thailand, and the Philippines, and is still unheard of in countries like Bangladesh and Cambodia.

Access to dialysis facilities has improved; however, differences in treatment uptake are still evident due to faster growing facilities managed by the private sector and non-governmental organizations. Access to care is also easier in urban areas where there is a higher concentration of HD centers compared to rural areas. This is seen in several countries such as Japan, China, and India.

Upper-middle and high income countries such as Hong Kong, Japan, and South Korea are able to provide nearly full coverage for dialysis treatment. Varying degrees of copayment models have also been put in place for patients in Japan, Singapore, and South Korea, to be able to provide appropriate care for its people. More often than not, patients are also able to choose their kidney replacement therapy (KRT) modality freely; Thailand and Hong Kong have been able to successfully implement a peritoneal dialysis-first policy. 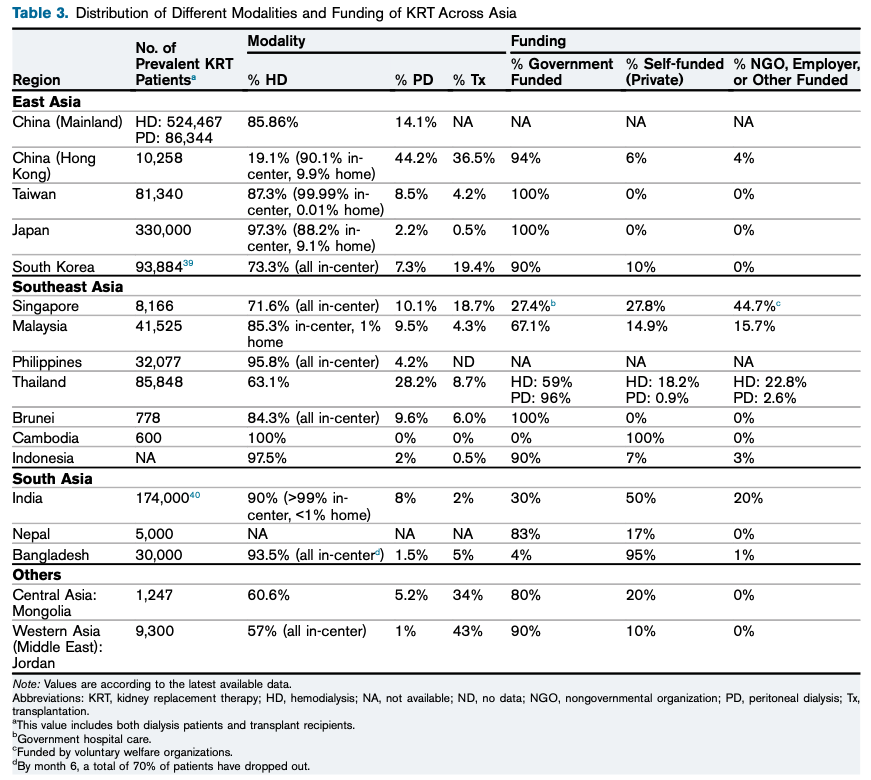 This is not the case in low-middle and low income countries like the Philippines. In the Philippines, only partial support for KRT is provided depending on funding availability, and even then, health expenditures for medications are still largely out-of-pocket. A peritoneal dialysis-first policy was also implemented, but it has not been successful — factors for which have not been fully explored. 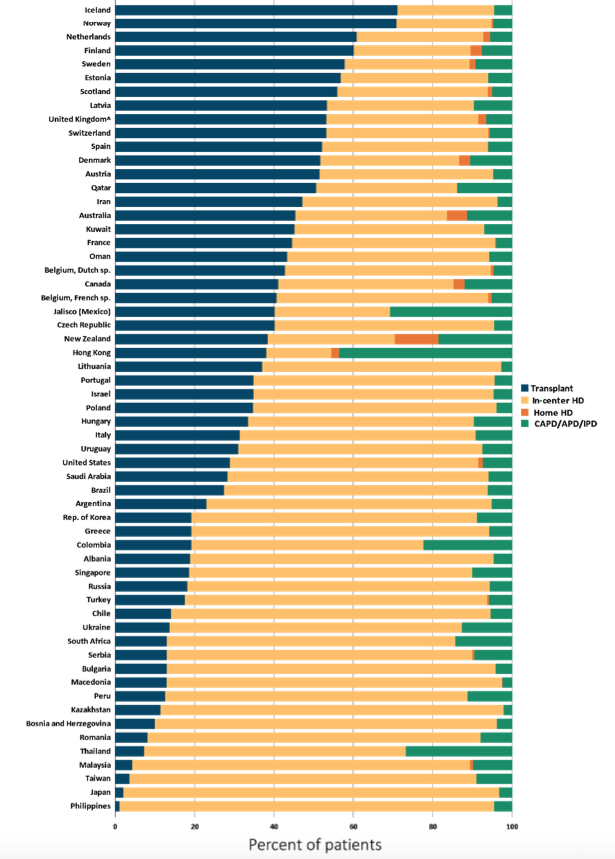 Hemodialysis remains the most common modality used in most Asian countries. Despite the growing number of patients with kidney failure and earlier stages of CKD, vascular access care remains suboptimal. This is particularly evident in India, where >90% of patients are started on dialysis with a temporary catheter, with resultant increases in bloodstream infections. In Cambodia, vascular access creation costs 1- to 1.4-million KHR (approximately $250-350 USD, or over 20% of the average household income in Cambodia), and if done for emergency hemodialysis, costs an additional $4 million KHR (approximately $100 USD) on top of treatment. Similar costs are seen in most other low-income countries.

These changes in health policy show a stark disparity in dialysis prevalence and access to care among different Asian countries. The perspective by Tang et al also explored the association between the number of nephrologists and patients on KRT. They highlighted the concept of a “reverse phenomenon” which reflects the mismatch in the number of available nephrologists in a country and access to treatment. For example, the prevalence of patients on some form of KRT in Thailand is 85,848 and in the Philippines is 32,077 patients. Thailand has 1.4-fold more nephrologists per million people than the Philippines, but the Philippines has 4-fold more nephrologists per thousand patients on KRT, likely reflecting a much smaller proportion of Filipino patients with access to KRT compared to Thailand and any other Asian country (see Figure 2 below). This may further reflect the high burden of kidney disease in the Philippines and the need for better CKD diagnosis and prevention programs. 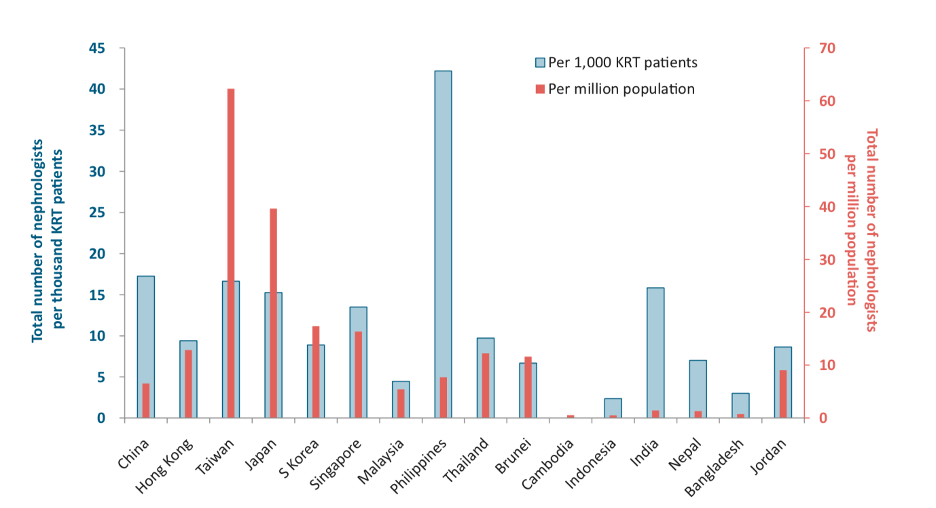 Witnessing this complex reality unfold during my first few months of fellowship was difficult. Instead of preparing patients for a smooth transition to KRT, I’ve lost count of how many times I’ve found myself scrambling to provide life-saving treatment in the emergency room, obtaining consent for HD from families for their loved ones – who were usually intubated, severely acidotic, comatose or in status epilepticus from severe uremia.

I began my year as an optimistic, rather aggressive physician, pushing boundaries with my patients. I later learned that if I really wanted to help treat them, management goes beyond their pH, potassium or bicarbonate values, and instead, relies on understanding the socioeconomic factors that come into play with their disease. In my experience, this means facing difficult questions. If we start HD and send this patient home, will they be able to afford transportation to and from in-center HD three or even two times a week? Will they be able to afford permanent vascular access or maintenance medications? Will starting hemodialysis mean lessening their family’s savings for their grandchildren’s education?

I found myself discussing all these questions with my eighth patient – the one I found myself with just after dawn on that gloomy November morning. She was brought to our hospital six months ago and was intubated at the emergency room for depressed sensorium and dyspnea from severe metabolic acidosis. It was her first health care consult. She was initiated on HD with consent from her daughter, the mother of the two children she was currently with. She was sent home awake and had initially improved, but as months passed, one problem led to the other.

She could not afford surgery for an arteriovenous fistula creation, and although it could be subsidized by the government, our hospital had a waiting list of 4+ months. If she wanted it done sooner, she would have to pay an additional fee, something she was not willing to take out of her grandchildren’s school tuition. She had been in and out of the hospital for multiple reasons – pneumonia, catheter-related bloodstream infections, fluid overload from missed hemodialysis sessions – and in the end, underneath her smile, she expressed her pain and exhaustion. By that time, my day had just begun, but I too felt tired.

Tang et al encapsulated the current advances (and shortcomings) in the provision of KRT across most Asian countries. It gives us a glimpse of how we are doing compared to others. Exploring disparities in access to dialysis and transplantation across different socioeconomic backgrounds within each Asian country, and the burden of out-of-pocket health care expenditures are some other aspects that should be explored in the future.

Indeed, a great deal of change has been made by many countries in Asia in order to move health care policies for kidney disease forward. Government subsidy for KRT has been expanded. Reserve funds have been set up to protect the financially underprivileged. Private-public partnerships have also been explored. But perhaps, in the next few years, focus may need to be shifted towards prevention programs, promotion of disease awareness, coverage for medications, and expanding organ donation and transplantation, to alleviate the burden of chronic kidney disease and improve quality of life.