I used to think that if I studied physiology enough. If I developed a sophisticated model of how the body works, I could use it to recognize and respond to disease by choosing therapies that “made sense” to fix the patient. But a few decades of “it made sense” failing repeatedly in randomized controlled trials (see higher hemoglobin with ESA therapy; see non-calcium based binders for hyperparathyroidism; see higher dose of dialysis in chronic hemodialysis, see higher dose of dialysis in acute kidney injury, see higher dose of dialysis in chronic peritoneal dialysis, see this Twitter thread) has changed my view of medicine. We live in an evidence-based paradigm, and no matter how accurate your medical calculator or sophisticated your physiology model, if you can’t show up in a prospective, interventional trial, you’re peddling weak sauce.

Nowhere is this more clear than in the management of hyponatremia. We were so certain of our models governing sodium that the entire field is nearly untouched by randomized controlled trials. We have Schrier’s SALT trials of tolvaptan and… and… that was largely it until very recently when we have today’s trial of fluid restriction, furosemide, and salt tablets by Krisanapan et al published in AJKD and an intriguing trial of SGLT2i to treat SIADH published in JASN. (For a comprehensive discussion of the lack of controlled trials in hyponatremia, take a look at the responses to this tweet.) That type of paucity of controlled trials is just embarrassing for a common disease like hyponatremia.

The trial by Krisanapan et al examines how we treat the most common electrolyte disorder in the hospital. It is shocking that it is the first RCT to do this, but here we are. The study randomized 92 people with a diagnosis of syndrome of inappropriate antidiuresis (SIAD, apparently some renamed SIADH while I was on-call recently) and hyponatremia to one of three treatments often prescribed for patients with SIAD:

It is wonderful to get an RCT of these common treatments for hyponatremia, but before we dive into the intervention details let’s take a moment to recognize that we have no compelling data that treating asymptomatic hyponatremia at all is essential. Though many bad outcomes (falls, confusion, increased hospital mortality, fractures) are associated with hyponatremia, whether those associations actually are caused by hyponatremia is largely unexamined. Where we have prospective data on the treatment of hyponatremia, it is always on fixing the numbers, never looking at the more fundamental question of whether fixing the numbers does anything to help the patient. (If you are interested in this question, do not miss Renneboog et al’s 2006 manuscript on this. It is pretty convincing that there is a causal relationship between hyponatremia and falls.)

One of the side benefits of an RCT is it can move an association to causation, but that is only possible if there is a difference between the treatment groups. For example, hypertension is associated with stroke. A trial is done which lowers the blood pressure in one arm. Subsequently, the number of strokes falls in that arm. Our association between stroke and hypertension has now graduated to causation. Unfortunately in today’s trial of hyponatremia we do not have a positive trial and cannot move these associations to causation.

Patients were randomized to the three interventions in a 1:1:1 ratio, with stratification by serum sodium, so each intervention received similar numbers of patients with mild, moderate and severe hyponatremia. The interventions were as follows:

Furosemide was given once a day with the goal of achieving a negative fluid balance of 500 ml per day. Doses started at 20 mg and could be titrated up to 40 mg daily.

The study was 28 days long. Though patients all initiated the study in the hospital, patients who were discharged continued on the study through day 28. The primary outcome was the change in sodium from day zero to days: 4, 7, 14, and 28. The authors did a power analysis and predicted they would need 30 people to have 80% power to detect a difference of 3 mmol/L at 4 days. The sample size calculation anticipated 5% of patients lost to follow-up. (Spoiler: There were a lot more than 5% lost to follow-up.)

The top line result was that there was no difference in the change in sodium at 4 days or 28 days. At seven days the p-value was 0.03. The authors did not adjust for multiple comparisons and even the authors walked away from that finding,

Take a look at Table 2 for yourself:

In terms of adherence, 63% of patients adhered to the fluid restriction, and only 43% of the patients assigned < 500 ml/day reported good adherence.

Adverse events: 10 of the patients died during the follow-up period, which was only 28 days. Nine of these deaths were due to cancer; none of the deaths were attributed to the interventions and the authors did not think they were due to the hyponatremia. Fourteen patients did not complete the study due to adverse events. Mostly this was AKI, though there was one case each of hypotension, hypovolemia, and hypernatremia.

We have an unblinded, single-center trial that recruited well, but had a lot of unanticipated dropout so that it ended up underpowered for its primary outcome. Despite these limitations, we are presented with our first randomized trial of the first-line treatments of SIAD. So first off, a standing ovation for Krisanapan et al for getting it done.

The physiology says that adding salt tablets and loop diuretics should work so I am loath to abandon these treatments despite the futility found in this underpowered and open label study. Hopefully this opens some avenues for future studies. One of the ideas that the authors explored in the discussion was the possibility that the extremely tight fluid restriction negated the excess benefit one could get from sodium tablets and furosemide. Maybe. I know that I never order nor expect patients to abide fluid restrictions below a liter, and the compliance in this study showed that as well.

In EFFUSE-FLUID, furosemide was dosed once a day. We know that furosemide only lasts about 4 to 6 hours, so perhaps expecting this drug to work with once daily dosing was a mistake. When I use loop diuretics in SIAD, I prescribe furosemide twice a day to provide as prolonged coverage as possible because I am not just trying to increase urine output but trying to change the character of the urine. I am using a loop diuretic to lower the Furst Ratio, and I want that change to be not just for the urine in the next couple of hours but for all of the urine. Am I right? I don’t know. Sometimes it works. Sometimes it doesn’t work. Faithfully believing in the physiology is what got us into this mess. We needed to do a trial.

I am similarly concerned about looking at urine electrolytes only one time at the beginning of the trial. In my experience, many patients evolve from one etiology of hyponatremia to another over the course of treatment. Having more frequent assessments of urinary electrolytes might allow the investigators to better determine the characteristics of treatment responders and patients who are resistant to treatment. 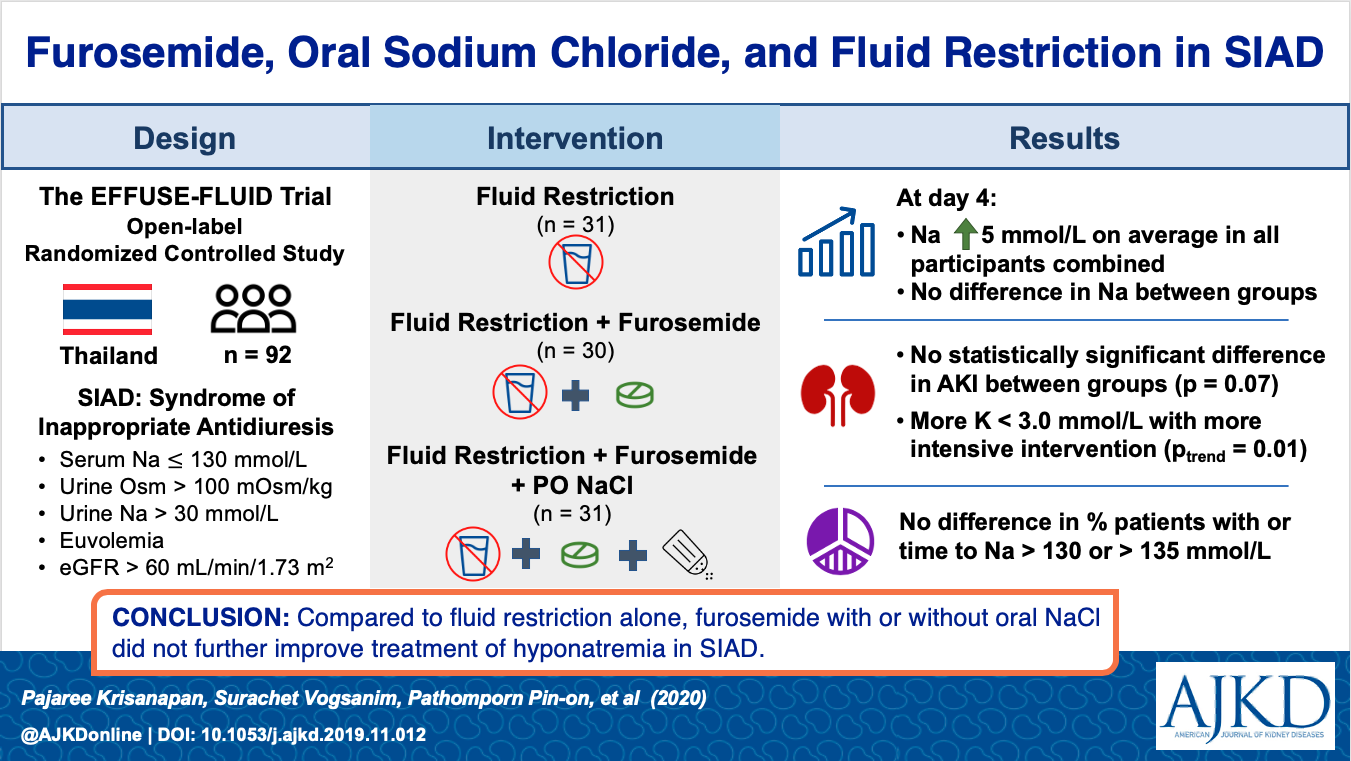 EFFUSE-FLUID is a study that I hope is the first of many. Krisanapan et al put the standard practice that is used thousands of times a day around the world up against the power of a prospective randomized controlled trial. They found that what we thought should work, didn’t work. Maybe this was a result of being an underpowered study. Maybe this was due to the fluid restriction compliance or diuretic dosing. Too many maybes. But hopefully this will be the first of many trials examining this common problem so we can put some data behind our recommendations.