Similar to Snowball’s cry, ‘NSAIDs bad, Opioids good’ has been the mantra chanted by nephrologists for many decades. How true is this? Not very, argue Zhan et al from an elegant analysis using the CRIC study. Before we dive into the present study, let us briefly review why NSAIDs, whose marvelous effects of pain relief and reduced inflammation, became the villainous poisons in kidney literature.

NSAIDs have been known to be useful for many centuries. The use of myrtle leaves’ bark for pain relief was described over 3,000 years ago. In the documented literature, Hippocrates reported using the bark of willow; when Celsus described the signs of inflammation a few centuries later, he also described the use of willow bark to mitigate inflammation. It took many more years until the active ingredient from willow bark, the glycoside called salicin was isolated in 1827. Salicin can be converted to salicylic acid which is more effective though harder on the stomach.

The next major step was the synthesis of acetylsalicylic acid by the German chemist Felix Hoffman and the nascent pharmacological company, Bayer. Though this happened in 1897, phenacetin was actually synthesized a decade ago in 1886 as a waste product of a benzo dye by Bayer. Interestingly enough, only a few days after synthesis of aspirin, Hoffman also synthesized an acetylated form of morphine, which made the employees feel heroic and hence was called heroin. Thus the history of opioids and NSAIDs are closely interlinked right from the original synthesis of the first potent and usable agents. 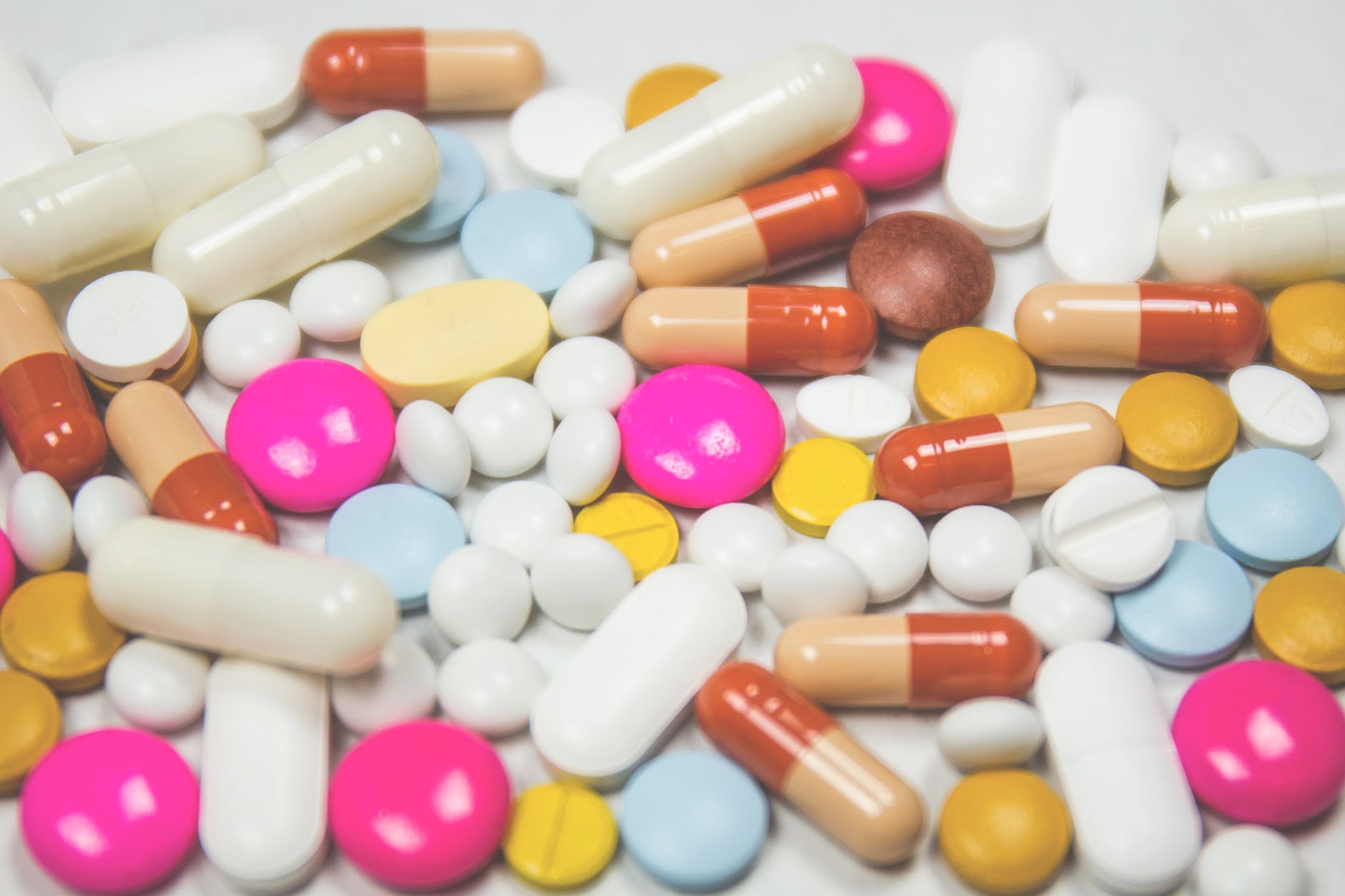 Photo by freestocks.org on Pexels.com

It was not until the 1970s that the mechanism of the action of aspirin was described by John Vane who subsequently received a Nobel Prize in 1982. By that time, the fact that NSAIDs can cause kidney failure was already known, following the report by Spuhler and Zollinger in 1953.  However, it took the increase in cases described from Europe and Australia in particular, which really brought the risk of kidney failure with NSAIDs to the forefront. In that era, these drugs were often packaged and marketed in combination, with aspirin and phenacetin used together with caffeine, codeine, or a barbiturate. Perhaps the combination of two NSAIDs together was bad, or perhaps the combination with these addictive companions made the consumed dose and duration long enough to cause substantial kidney damage. Nevertheless, subsequent large epidemiological studies did report a link between hypertension, electrolyte disturbances, and acute as well as chronic kidney disease. Since then, NSAIDs have been the prototypical nephrotoxic agents to be avoided for anyone with CKD.

So… what is there to discuss anymore? The direct implications of the nephrotoxic effects of NSAIDs are that they should not be used for any patient with CKD or those at risk of developing kidney disease. But these drugs are really good for ameliorating pain and inflammation. What should CKD patients use? A few years ago, a pain guide by Koncicki et al that was also published in AJKD was heavy on the use of opioids. Unfortunately, the past few years have demonstrated the often overlooked dangers of opioid misuse and opioid abuse.

The opioid crisis has ravaged middle America. As a simple example, the devastation wrought by opioids has been a driver of a decrease in life expectancy for four consecutive years (2014-2018, from the National Vital Statistics Reports). Even tramadol, which is considered to be a safer opioid, is actually far more dangerous, as was pointed out in the subsequent correspondence. Data on the harms of non-NSAID alternatives such as gabapentin, which are also associated with more hospitalization and mortality in CKD patients, are also accumulating. Thus all the drugs that are used for pain control in CKD are dangerous. In this setting, how do you make rational choices?

This is where the recent analysis by Zhan et al from the CRIC (Chronic Renal Insufficiency Cohort) study is very timely and helpful.  The CRIC study is a prospective observational cohort which started in 2003, and is the closest that nephrology has to the famous Framingham study. In a previous analysis in 2017, this group reported 24% NSAID use in CKD, and that when NSAIDs were discontinued, it was often accompanied by opioid initiation.

In the present study by Zhan et al, just under 4,000 patients enrolled between 2003 to 2006 were included. A notable aspect of CRIC is a very careful ascertainment of analgesic use, along with all other medications. Hence this was not just based on databases which can miss over the counter NSAID use, but whatever the patients were actually taking. In addition to that, a time updated exposure was used where the exposure during a visit mattered for the outcomes in the following year. An important aspect from Table 1 of the study is that the patients who take opioids are quite different than the patients who take NSAIDs: 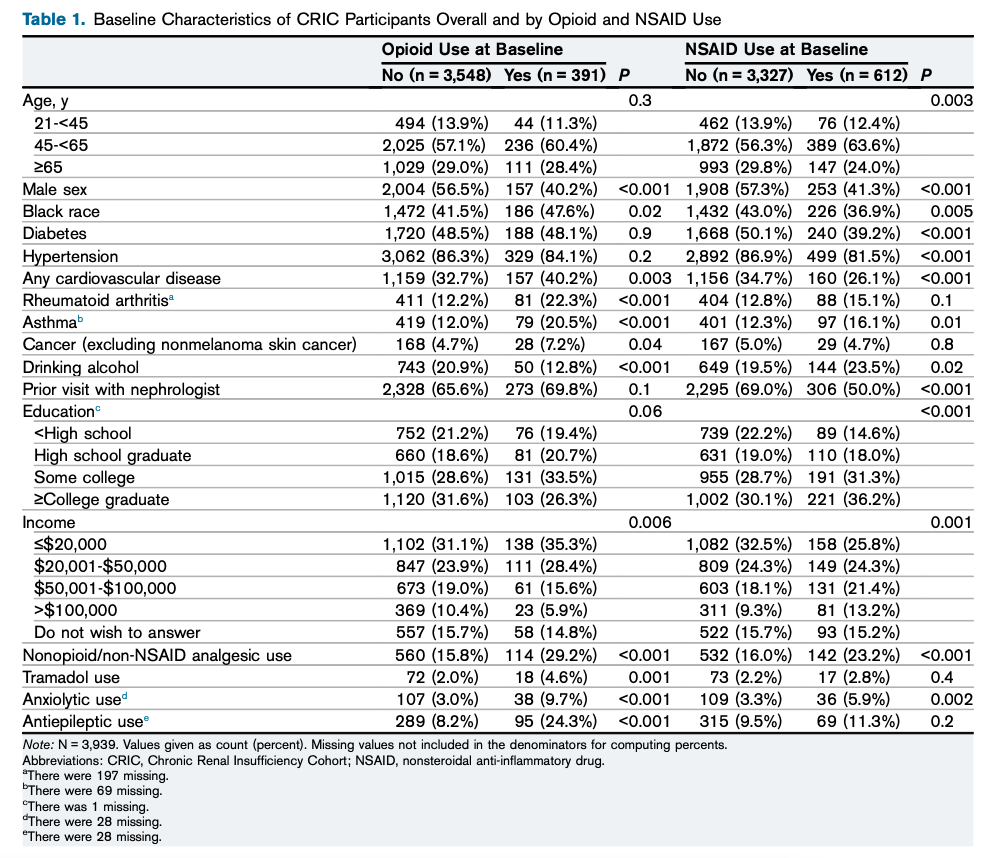 The authors take this into account by using marginal structural modeling, as well as time-dependent covariate analysis to pinpoint the causal inference as carefully as possible. From here, the notable highlights of this analysis are that:

This analysis is extremely important because it directly compares NSAID use versus opioid use. Patients take painkillers for a reason. This reason, such as some inflammatory condition or association with obesity or other comorbid conditions, might be the reason that the risk of kidney failure is higher, with the NSAID being an innocent bystander which gets blamed. For more on this study, you can review this NephJC blog and podcast as well which includes the CRIC study principal investigator providing valuable insight.

Two other important articles recently published in AJKD which are related to this topic and which are worthy of consideration: 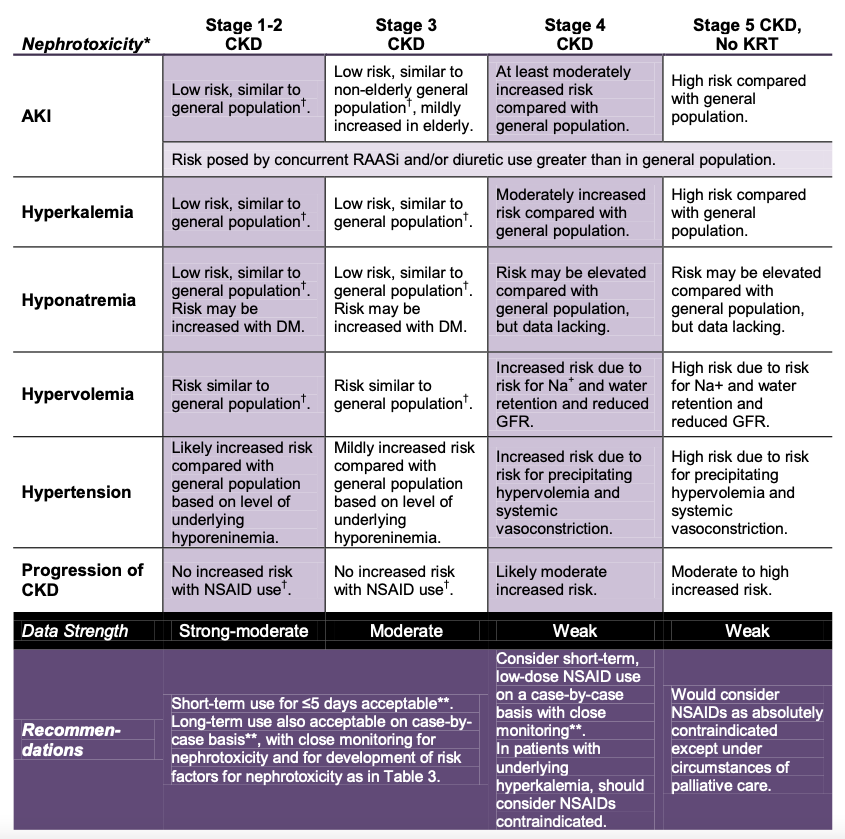 Summary of potential nonsteroidal anti-inflammatory drug (NSAID) nephrotoxicity in chronic kidney disease (CKD). ∗Outlines additional risk for each nephrotoxicity posed by CKD at different stages, as well as any risk factors (including those in Box 2) that pose a greater risk in these populations. The burden of Box 2 risk factors is high, especially with increasing CKD stage, and this must be considered in conjunction with the risk outlined in this table, which is reflected in these Recommendations. †In the absence of other risk factors as noted in Box 2. ∗∗With minimization of risk factors outlined in Box 2, as able. Figure 3 from Baker and Perazella, AJKD ©NKF 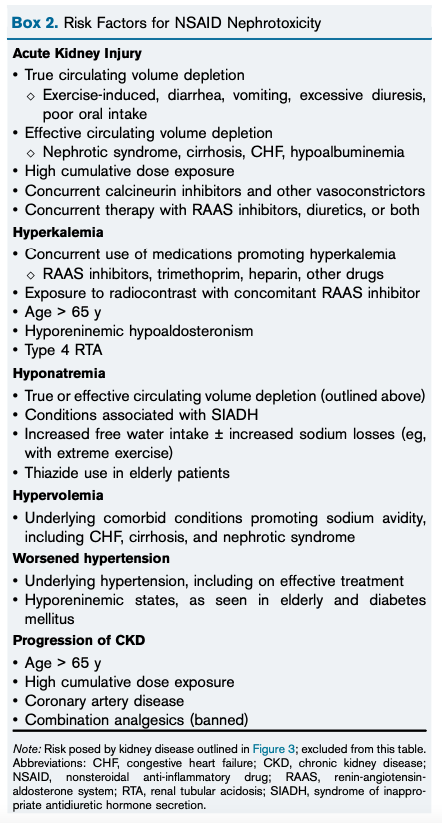 Note: Risk posed by kidney disease outlined in Figure 3; excluded from this table. Box 2 from Baker and Perazella, AJKD ©NKF

This is likely to be some of the best data we ever see on comparative harm of NSAID versus opioid use in CKD. Snowball’s statement in the introduction is black and white, but this thoughtful study shows that the truth about pain relief in our patients is much more grey.