The 1960s in the United States was a roller-coaster of a decade characterized by protests for the civil rights movement, the war in Vietnam, activists demanding more rights for women, the Cuban missile crisis, the space race, hippies and the assassinations of John F. Kennedy as well as Dr. Martin Luther King Jr. Interestingly, the 1960s was also the decade of medical innovation, notably cardiovascular advances with the invention of CPR, the completion of the first human heart transplant, creation of portable defibrillator, beta blockers, artificial heart, and left ventricular assist devices (LVAD). The LVAD occurred in the heart of Texas Medical Center (pun intended) at Baylor College of Medicine during, what I call, the wild-west of cardiovascular surgery – a time characterized by urgency, invention, and a deep-seated rivalry. Given the recent AJKD original investigation by Franz et al on outcomes in LVAD patients receiving maintenance hemodialysis, I sought to better understand the circumstances that led to its inception. 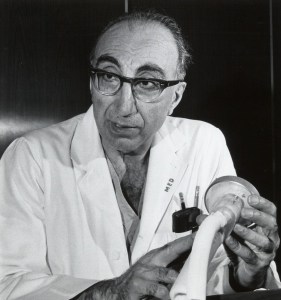 The left ventricular assist device was created by Dr. Domingo Santo Liotta at Baylor College of Medicine in Houston, TX in 1962. Liotta was a son of Italian immigrants born in Argentina in 1924. After graduating from the National University of Cordoba with doctorates in medicine and surgery and whilst completing cardiothoracic training in the University of Lyon, France, he published his work on an artificial heart prototype that was successfully used in small animals. Subsequently, he was hired by Dr. Michael E. DeBakey to join the Department of Cardiovascular Surgery as a surgical researcher in 1961 where the total artificial heart program was being developed. Dr. DeBakey received a NIH grant to develop an LVAD and one year after Dr. Liotta’s arrival, the first LVAD was prototyped; in 1963 it was implanted by Drs. Liotta and E. Stanley Crawford.

In addition to the creation of the LVAD, 1962 marked the year that Dr. DeBakey’s greatest rival, Dr. Denton Cooley, moved to an adjacent Texas hospital to start an independent cardiovascular service. This marked the start of bitter feud which divided the medical center but spurred innovation, invention, and multiple surgical firsts in both camps. Despite practicing under the same institution, Drs. DeBakey, Cooley and Liotta would eventually find themselves in a total artificial heart triangle which led to the complete break between Drs. DeBakey and Cooley. To learn more about this rivalry, checkout ‎The Eyes of Texas Presents Mismatch on Apple Podcasts or State of the Heart: A history of artificial heart development (1994) on YouTube.

Let’s get back to LVADs – the first successful implantation occurred in 1966. Drs Liotta and DeBakey operated on a 37-year-old woman whom despite external or paracoporeal circuit support passed 10 days after surgery. It would take many iterations of the VAD before successful long-term implantation would occur in 1988.

After cardiac transplantation was first performed in South Africa by Dr. Christiaan Barnard, the invention of these devices was to serve as a bridge to transplantation. The early VADs were pulsatile, meaning that blood would be sucked into the pump from the left ventricle and pumped into the aorta, mirroring the typical function of the heart. 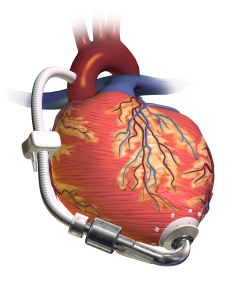 Second and third generation LVADs have evolved to continuous flow pumps which land in two general categories: centrifugal pumps or axial flow impeller pumps. The later versions were preferred due to its smaller size and reliability – however this results in a pulseless or nearly pulseless patient. To learn more about the evolution of the LVAD, check out this YouTube video from Dr. Frazier, Ventricular Assist Devices (VADs): History, Development, and Future – PerfCon2020 – YouTube

The benefits of LVAD includes improved survival for patients who are on destination therapy and serves as a bridge to heart transplantation. Some of the drawbacks of LVAD include a high propensity for patients to develop kidney disease before and after its placement. Unfortunately, those patients who develop AKI have higher rates of complications, mortality and those who are initiated on dialysis have an even higher mortality with less than 30% of patients being discharged home. The question that Franz et al explored in a recent AJKD original investigation is, what happens to these LVAD patients receiving maintenance hemodialysis post hospital discharge?

To answer this question, 11 patients were followed over the span of 8 years with the following characteristics:

This paper is associated with several helpful tables that address the above outcomes and dive into each topic with detail. The table I find the most interesting is the major outcomes for these patients seen below: 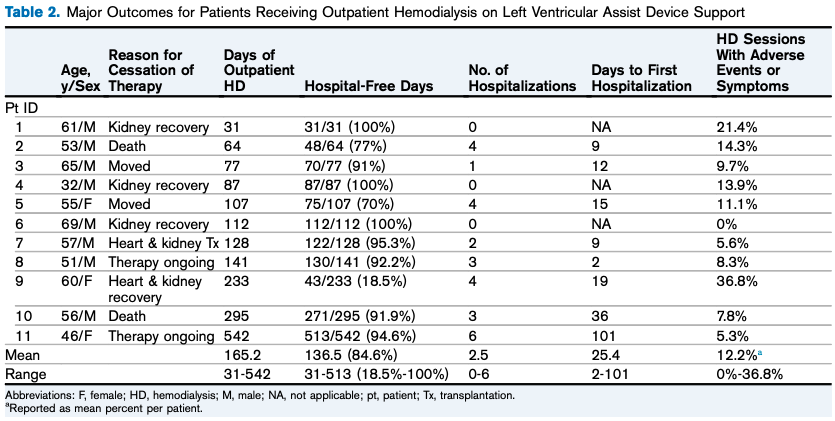 The most common reasons for hospitalization were infection followed by hypervolemia.  Interestingly, 4 patients recovered kidney function (of the remainder, 1 underwent combined heart/kidney transplant, 2 continued dialysis, 2 died, and 2 were lost to follow-up).

This paper is unique as it dives into the relatively small number of LVAD patients in outpatient dialysis units. Several sections review the overall hemodialysis treatment characteristics (number of sessions, weight change, MAP, UFR, Qb, Qd etc.), symptoms during HD as well as the characteristic comparison at the initiation and completion of hemodialysis (hours/week, hemoglobin, EPO doses, Albumin, even spKt/V). Finally, Franz et al dives into the structured protocols required to dialyze these patients safely/successfully.

In conclusion, while the birth of the LVAD/artificial heart occurred in the heat of cardiovascular battle – it is important to depart with this: not all rivalry is bad, sometimes the heat of the moment can serve a greater good. For those wondering and those who like a fairytale ending, both Drs. DeBakey and Cooley ended up reconciling their differences decades later – I’m sure they shared a moment to look back and laugh about their tiff.