The demonstration of light chain restriction in crystalline kappa-related LCPT by routine IF-F is not always possible. In fact, it has been shown that the sensitivity of IF-F in detecting crystalline intra-cellular kappa deposits is lower when compared to IF-P: 35-40% vs 97-100%, respectively. Similar findings have been observed in other kappa crystalline nephropathies with extracellular crystalline deposits, such as crystalglobulin glomerulonephritis. Thus, is it suggested to perform IF-P on suspected cases of crystalline LCPT and other crystalline nephropathies when IF-F shows negative or weak staining.

In cases of proliferative glomerulonephritis with C3-dominant staining by IF-F, IF-P may reveal masked monoclonal immunoglobulin deposits in the glomeruli. This rare lesion represents about 5-10% of patients initially (mis-)diagnosed with C3GN by IF-F. It is typically found in elderly patients with clinical evidence of circulating monoclonal gammopathy that matches the glomerular monoclonal protein detected by IF-P. Therefore, the recommendation is to perform IF-P in patients with a C3-dominant staining pattern by IF-F and a detectable circulating monoclonal immunoglobulin. 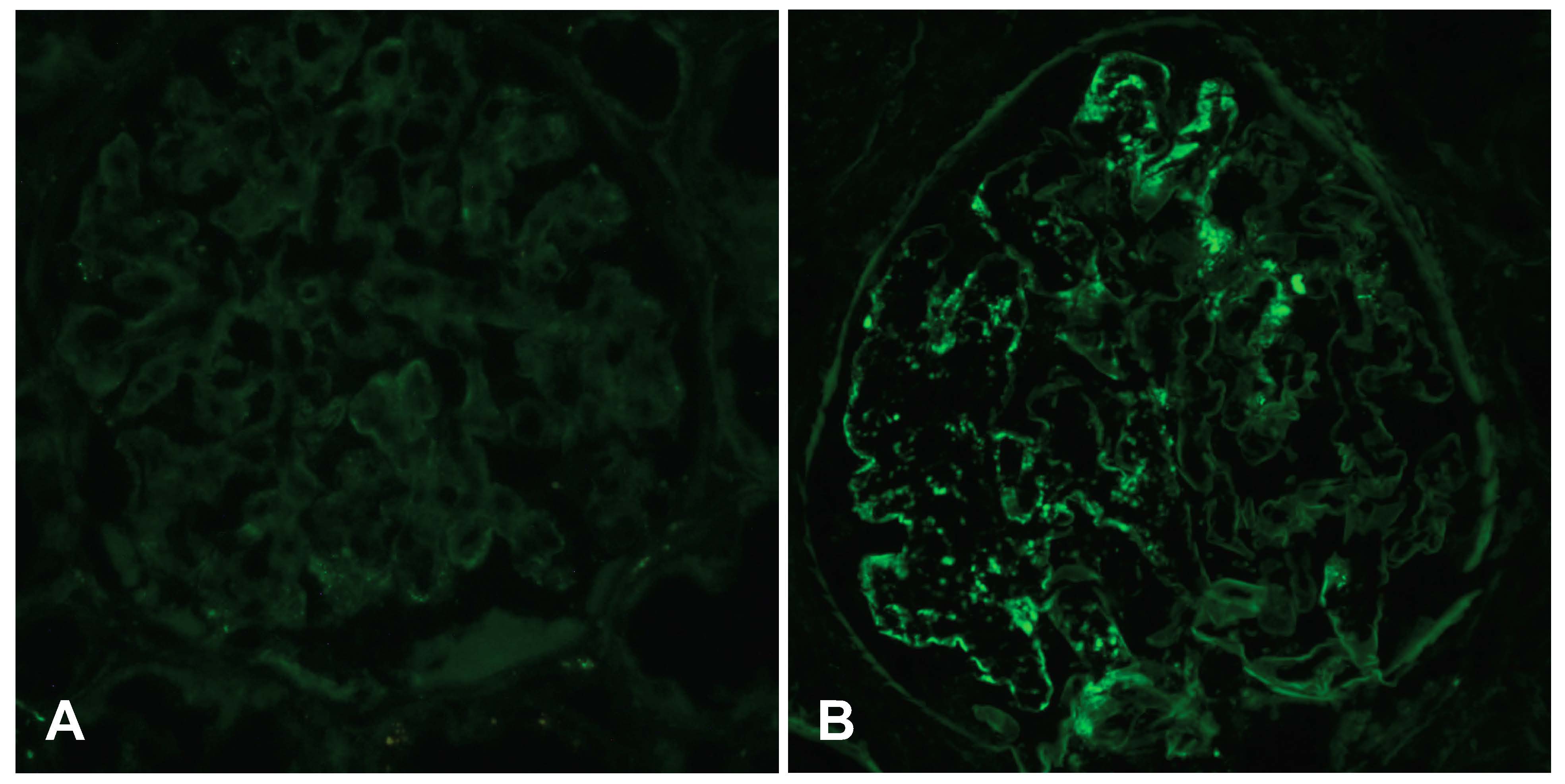 Figure 1. Immunofluorescence for IgG showing a negative staining by IF-F (A) and a positive staining IF-P (B) in a case of membranoproliferative glomerulonephritis.

Membranous-like glomerulopathy with masked IgG kappa deposits (MGMID) is a recently described entity characterized by a predominant membranous pattern by light microscopy, subepithelial, and mesangial immune-type deposits by electron microscopy, and masked immunoglobulin deposits by IF-F. In those patients, IF-P reveals IgG deposits with κ restriction. Characteristic staining for serum amyloid P within the deposits has been shown. It is most often found in young females in an auto-immune setting and carries a variable outcome, ranging from spontaneous remission to ESRD. In MGMID, performing IF-P is needed to establish the correct diagnosis. It is suggested to perform IF-P in cases with a predominant membranous pattern when IF-F shows negative or weak staining for immunoglobulins and complement components.

Paraffin-IF has been used since the 70s as a salvage technique in renal pathology when no glomeruli are sampled on the frozen tissue for IF. Satisfactory results are obtained with this technique in demonstrating immune-complex deposits and monoclonal-immunoglobulin deposits in kidney biopsies. However, IF-P is less sensitive than IF-F in some glomerular diseases, such as primary membranous nephropathy, anti-GBM disease, and C3 glomerulopathy. Recently, the use of IF-P has uncovered masked deposits in certain specific kidney diseases, as described above. The technique is performed on formalin-fixed paraffin-embedded sections. It involves an additional step consisting of incubating the paraffin sections with a proteolytic enzyme (most commonly pronase), allowing for antigen retrieval before the incubation with fluorescein-conjugated antibodies.

The explanation for masked deposits remains unknown and may be related to the reduced availability of the antigenic epitope due to the nature of the deposits (crystalline) or the technical processes involved in IF. It is also important to point out that IF-P’s added value has been mainly demonstrated in centers that use transport medium, such as Michel’s. With the exception of kappa-related crystallin nephropathies, this phenomenon has rarely been found in centers that perform IF on tissue that is directly frozen.