Patients with kidney failure on maintenance hemodialysis are at higher risk of SARS-CoV2 infection and worse outcomes, spurring the urgent need for effective vaccination programs. Currently, two mRNA vaccines for SAR-CoV-2 (mRNA-1273 [Moderna], BBNT162b2 [Pfizer-BioNTech], have been approved for use. In the general population, the vaccines have been shown to prevent 94% of symptomatic COVID-19 cases and 87% of hospital admission.

However, the efficacy of SARS-CoV-2 mRNA vaccines for patients with kidney failure is unclear. In particular, there is a paucity of data on whether these vaccines can improve clinical outcomes such as COVID-19 mortality and intensive care unit admission. Furthermore, there is concern about poor response to the vaccine because of the immunodeficient state of this population, as evidenced by their reduced seroconversion against Hepatitis B vaccination. One available method is to evaluate how the mRNA vaccine elicits immunity by evaluating the humoral and cellular response to SARS-CoV-2.

In a recent AJKD article, Broseta et al conducted an observational, prospective, multicenter study to examine both the humoral and cellular response to SARS-CoV-2 mRNA vaccine, and to determine the predictors of antibody generation and intensity. The study participants were patients on maintenance hemodialysis at 3 dialysis units in Spain. Two hundred five patients were vaccinated from February 3 to April 4, 2021, and followed through April 23, 2021. The authors assessed humoral and cellular response as follows:

A total of 175 participants received both doses of vaccine. Overall, the 97.7% of these patients developed either humoral or cellular response. 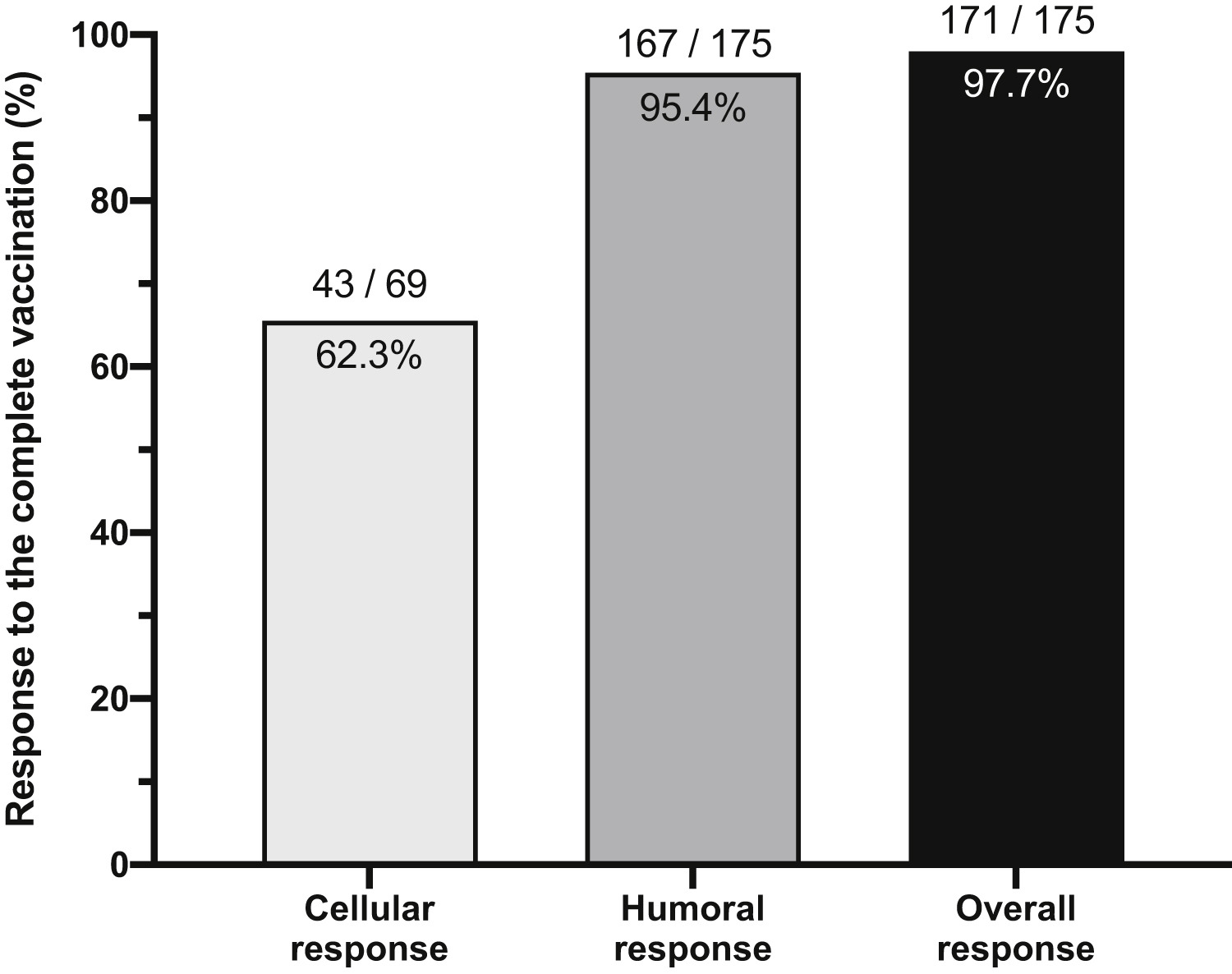 In terms of humoral response, 167 (95.4%) participants seroconverted, which is similar to data from the original vaccine clinical trials. In the univariate analysis, predictors of non-response include the use of immunosuppressive treatment, longer dialysis vintage, lower hemoglobin, lower albumin, lower white blood cells, and lower lymphocyte counts. But only immunosuppressive treatment and lower albumin remained as predictors after multivariable analysis. Eight of 175 patients did not seroconvert, where 4 of them were on immunosuppressive therapy, 3 were elderly, and 1 had type 2 diabetes.

Unsurprisingly, when comparing the antibody levels after the second dose, patients in the older group achieved lower levels of antibody than the younger group. Even in age-matched groups, those on hemodialysis were showed to have a slower pace of seroconversion than the general population.  Cellular response was measured in 69 out of 175 patients. T-cell activation by SARS-CoV-2 were detected in 62% of the patients evaluated for cellular response. Only one predictor, dialysis unit type, was associated with cellular response to vaccination.

This study found that the mRNA vaccines for SARS-CoV-2 generated overall immune response (either humoral or cellular or both) in a large proportion of patient with kidney failure receiving hemodialysis. This is encouraging data, but also highlights the need to be place special attention on those on immunosuppressant therapy given their risk of non-response to the vaccination. Future studies will hopefully evaluate the effectiveness of the mRNA vaccines on improving clinical outcomes.