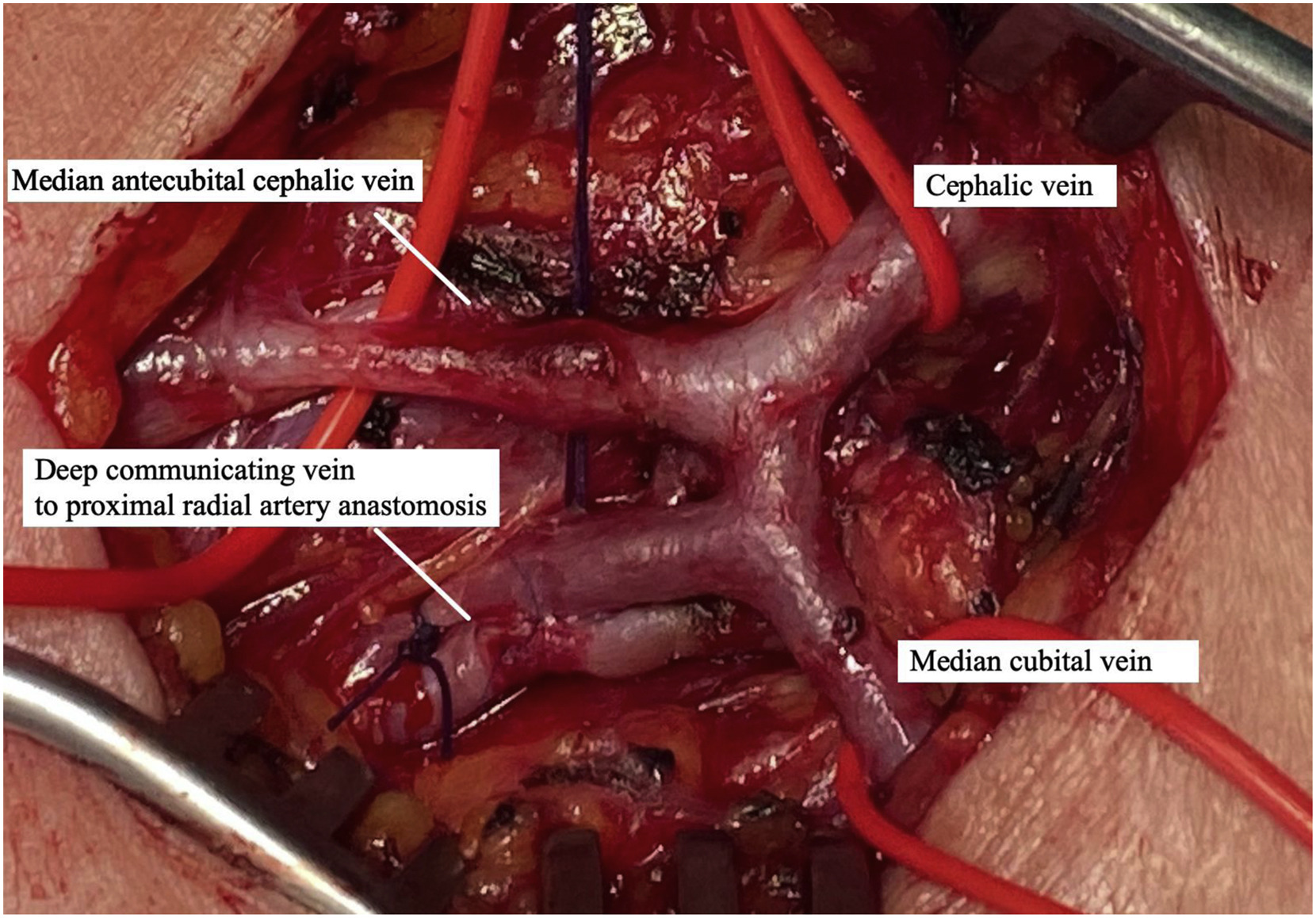 It has been said—and can’t be stated enough—that the arteriovenous fistula (AVF) is the lifeline for a patient on chronic hemodialysis.  This vessel connecting the patient to the machine must not only provide a high blood flow to allow for adequate clearance, but also must be sturdy enough to withstand repetitive large bore needle cannulations several times per week.  In addition, the ideal AVF will be free of complications related to excessive flow (steal or high output heart failure) or reduced flow (stenosis and/or thrombosis), and will withstand the test of time.  Besides the patient, no one understands the AVF better than the nephrology access team. Nephrologists, interventionalists, surgeons, dialysis nurses, and technicians are working together to keep this lifeline functional. Since the 1960s, the AVF has been, and continues to be, the preferred method for dialysis access.

Considering that dialysis is one of the main procedures that has made nephrology a subspecialty, and that arguably the most important part of this procedure is continuously acquiring the patient’s blood, when a new method of creating an AVF is discovered, it should not be embraced with enthusiasm until it has been examined appropriate academic rigor.  Approved within the last year, the endovascular AV fistula, when its creation is appropriate, has been purported to not only save the patient from a scar, but also to be safe and effective, with a success rate of 97.5%, a 3 month maturity rate of 89%, and a low complication rate (5%).  However, head-to-head comparisons with surgical AVFs are lacking.

In a recent AJKD publication, Shahverdyan et al embarked on the task of evaluating a percutaneous endovascular vs the classic surgical creation of the antecubital AVF.  The investigators followed a prespecified standardized anatomic selection criteria, importantly not allowing patients to be evaluated for the antecubital procedure if a distal radial–cephalic (including snuff-box) AVF was feasible.  If the antecubital anatomy was deemed to be appropriate, the AVF was placed, and the outcomes of the Ellipsys system endovascular AVF (pAVF) were compared to the surgical Gracz-type (sAVF) approach.  Although this was not randomized, and it was impossible to be blinded, this study was prospectively performed and analyzed retrospectively.  The primary outcomes were procedural technical success, time to physiologic maturation, time to first successful clinical use, primary patency failure (abandonment), secondary patency failure, re-intervention rate, and access patency.

Perhaps not surprisingly, the Ellipsys system had a shorter procedural time (14 vs 74 minutes).  Technical success was 100% for both arms. Access flow volumes at any time (sAVF, 960 ml/min vs pAVF, 842 ml/min at 3 months), time to first use (sAVF, 52 days vs pAVF, 54 days), and number of interventions per patient-year (sAVF, 0.66 vs pAVF, 0.86) were no different.  Primary patency failure at one year was also similar.  Importantly, for those patients starting hemodialysis, 79% of sAVFs and 85% of pAVFs were successfully used for 2 needle cannulation for 6 consecutive sessions.  Complications of high flow, such as steal or heart failure, were also similar. 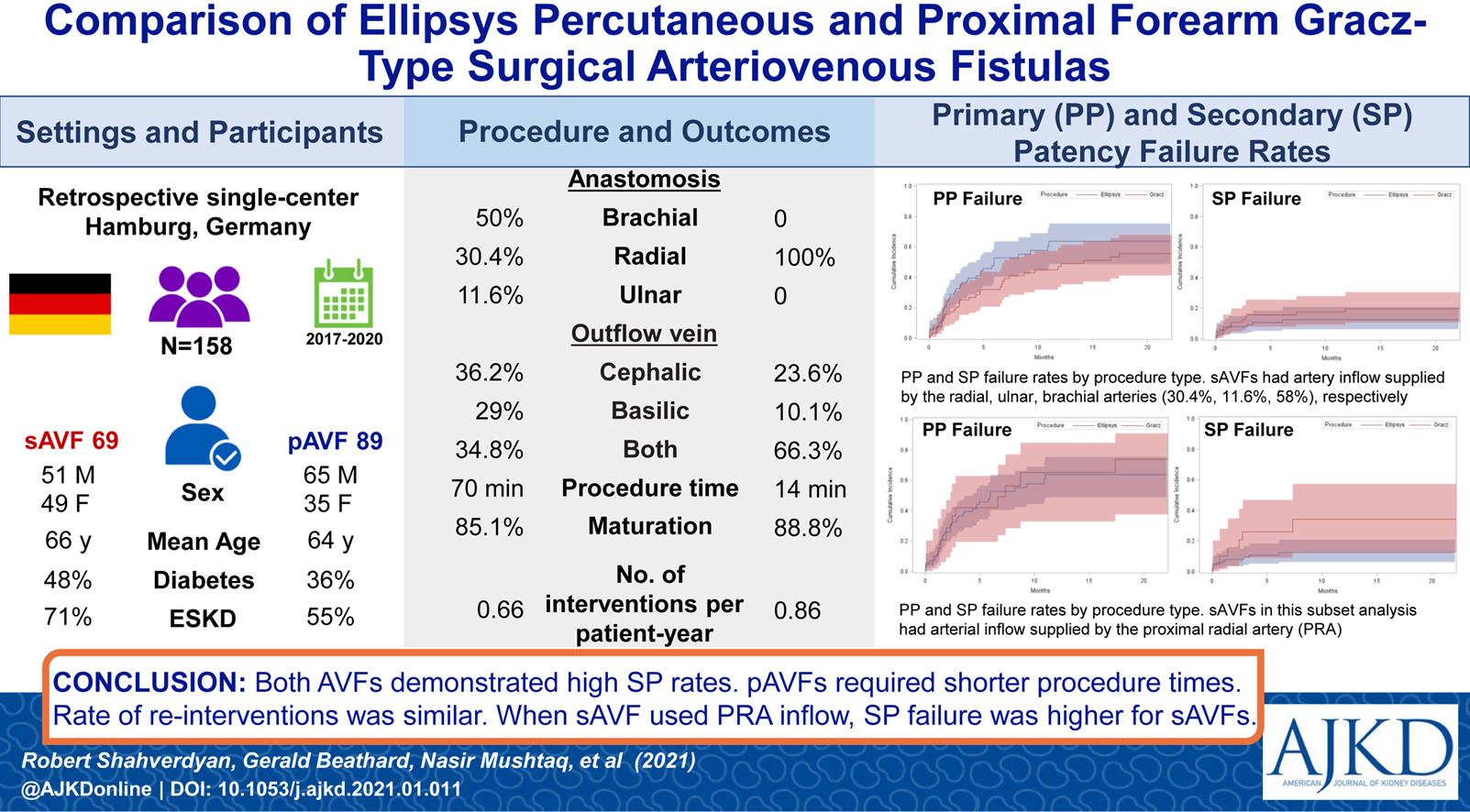