Editor’s Note: We asked authors of Original Investigations to provide short plain-language summaries that would briefly summarize what inspired their study, the basic approach taken, what was learned, and why it matters. We hope our readers will find this valuable in helping them keep up with the latest research in the field of nephrology. Highlights from the January 2022 issue [FREE]: 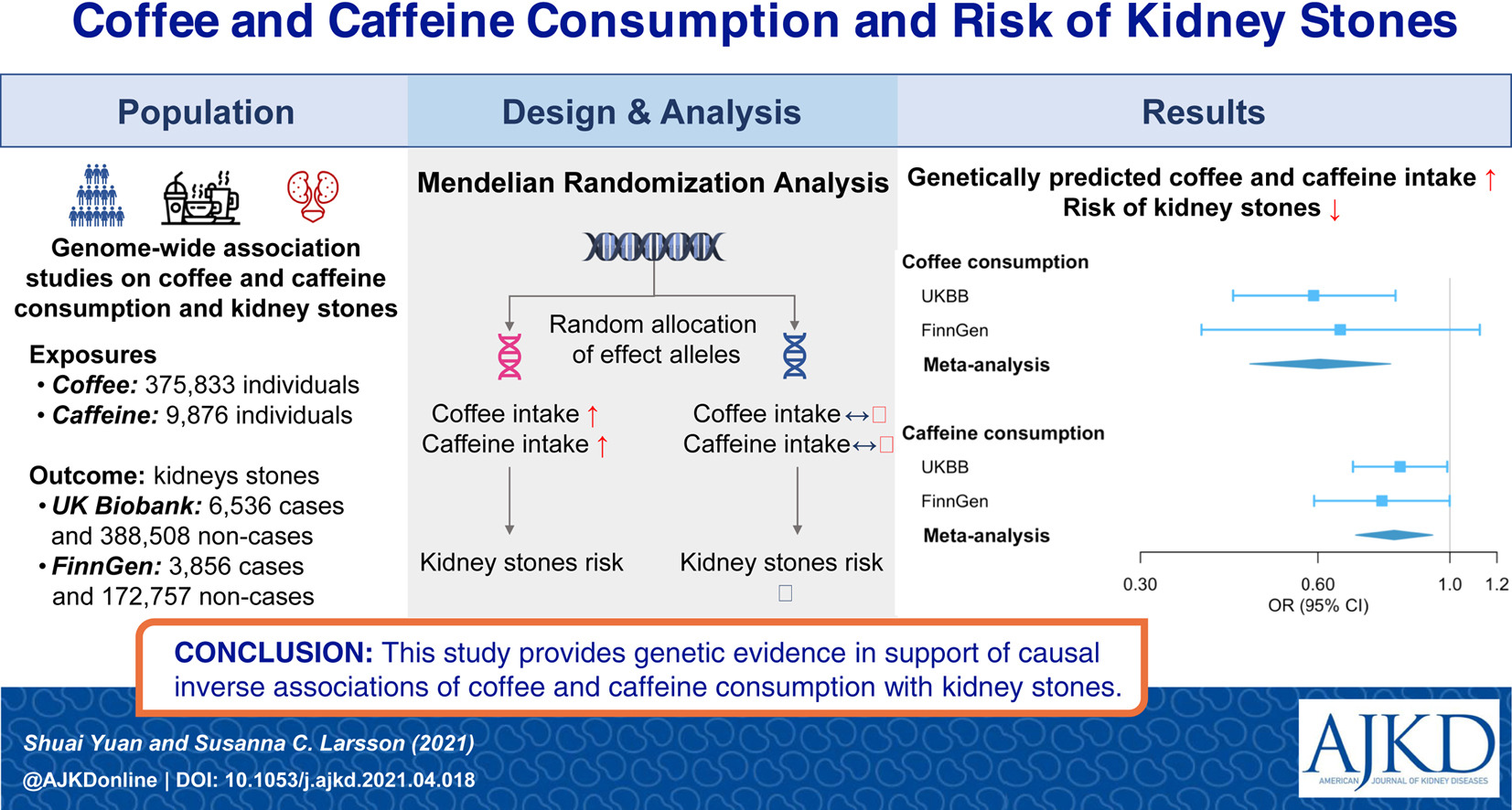 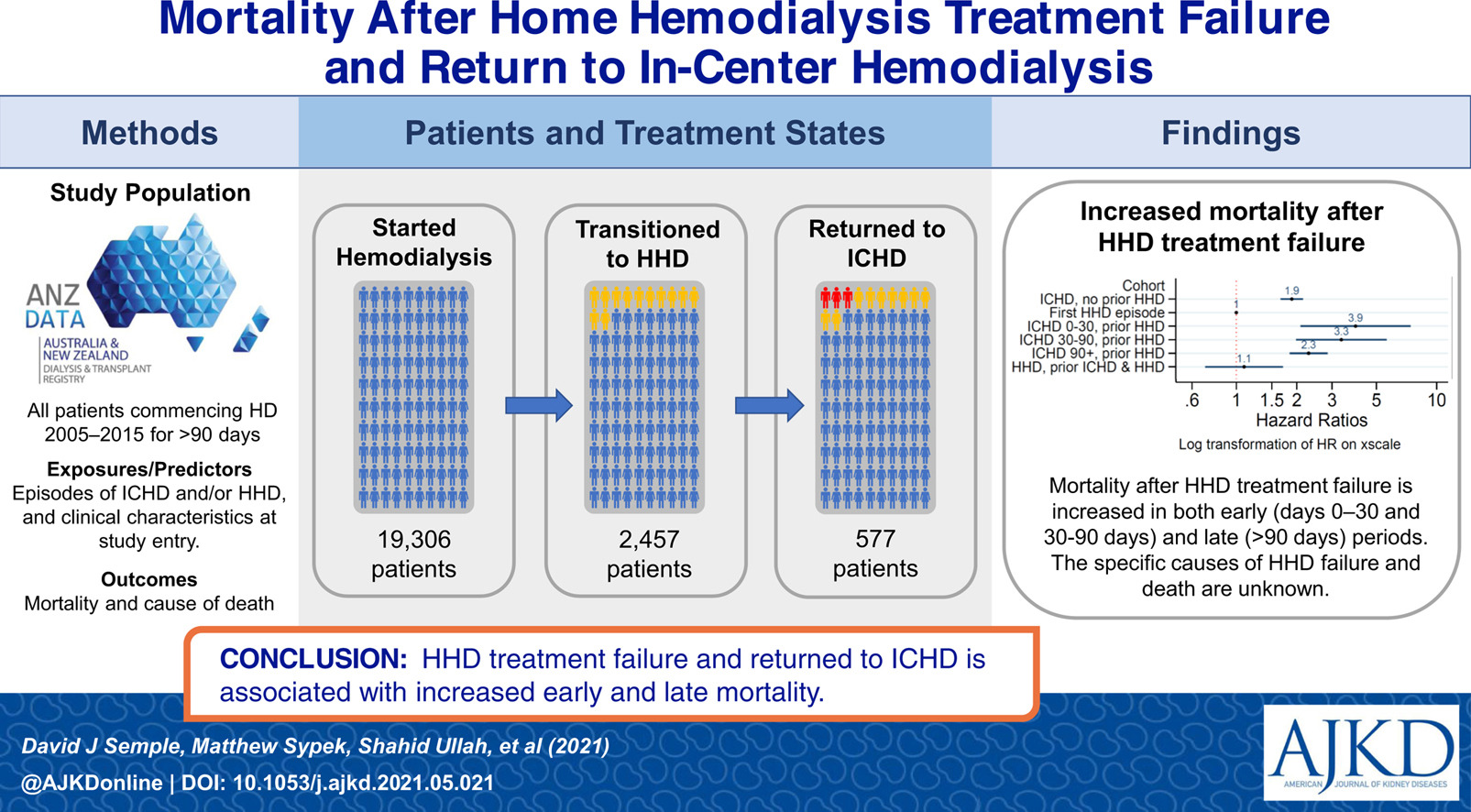 From the authors: Risk factors such as high blood pressure, diabetes, and high cholesterol are associated with an increased risk of complications of obesity like cardiovascular disease, stroke, and kidney disease. Previously, we reported that individuals with obesity who lacked these risk factors have higher risk of cardiovascular disease and stroke. In this study of 4.5 million individuals from the United Kingdom, we have compared individuals with overweight and obesity who were without these metabolic risk factors to those who are of normal weight. We report that these individuals with overweight and obesity, even in the absence of metabolic abnormality, have a high risk of developing chronic kidney disease over time. Whether weight loss will help to reduce the risk of incident kidney disease will need to be examined in clinical trials. 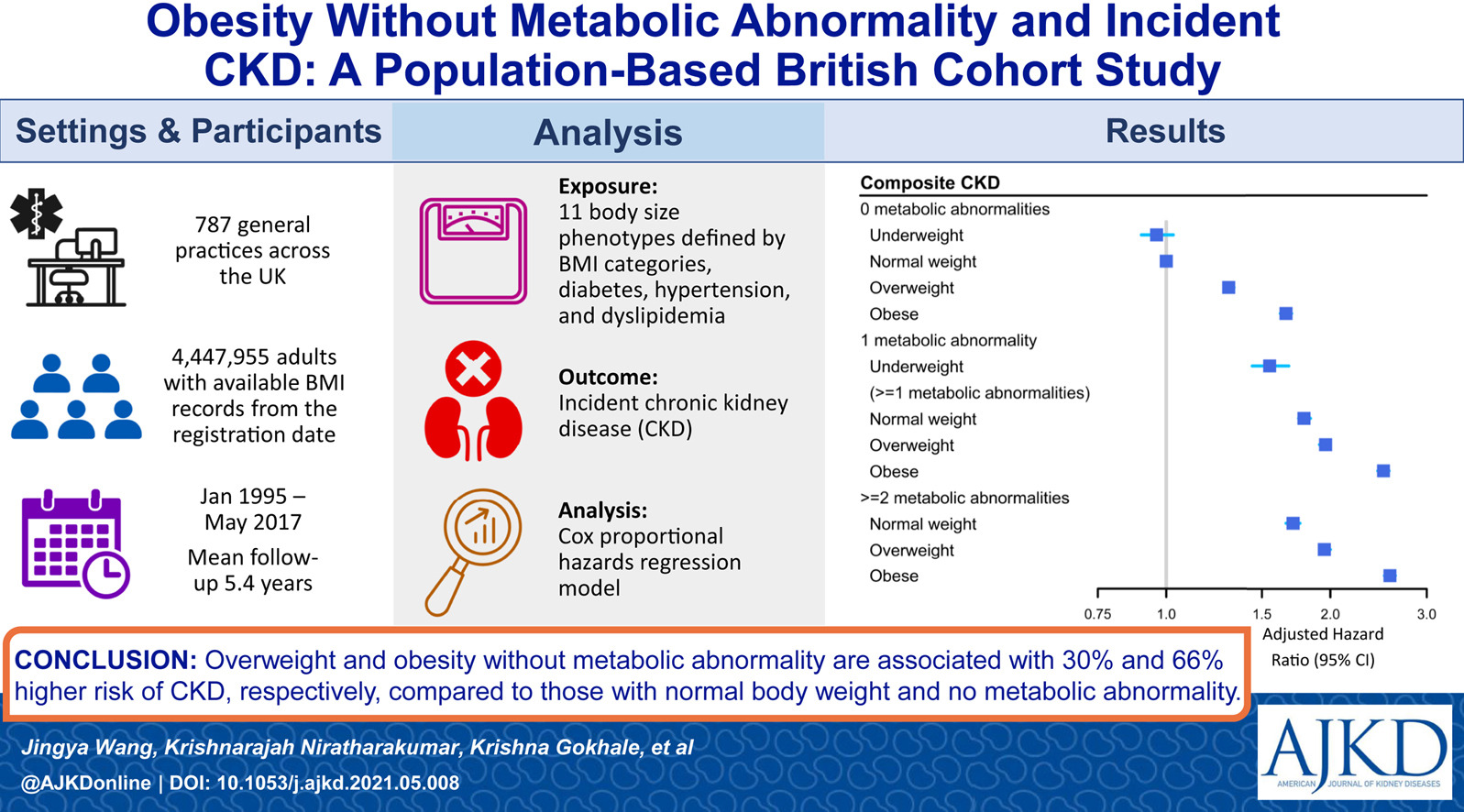 From the authors: Prior studies evaluating how markers of kidney function (estimated glomerular ﬁltration rate [eGFR] and pro-teinuria) relate to heart disease risk have often been limited by the use of kidney function measurements from only 1 or 2 time points. Using data from 2,438 participants in the CRIC Study, we evaluated if repeated values of eGFR and proteinuria over time improve the understanding of how changes in kidney function are associated with the risk of developing heart disease. We observed that worsening 1-year average and slope of eGFR and proteinuria, captured repeatedly over time, were each associated with an increased 3-year risk of heart disease. Thus, short-term changes in kidney function provide useful information about heart disease risk and represent possible opportunities for better, targeted management of patients with chronic kidney disease. 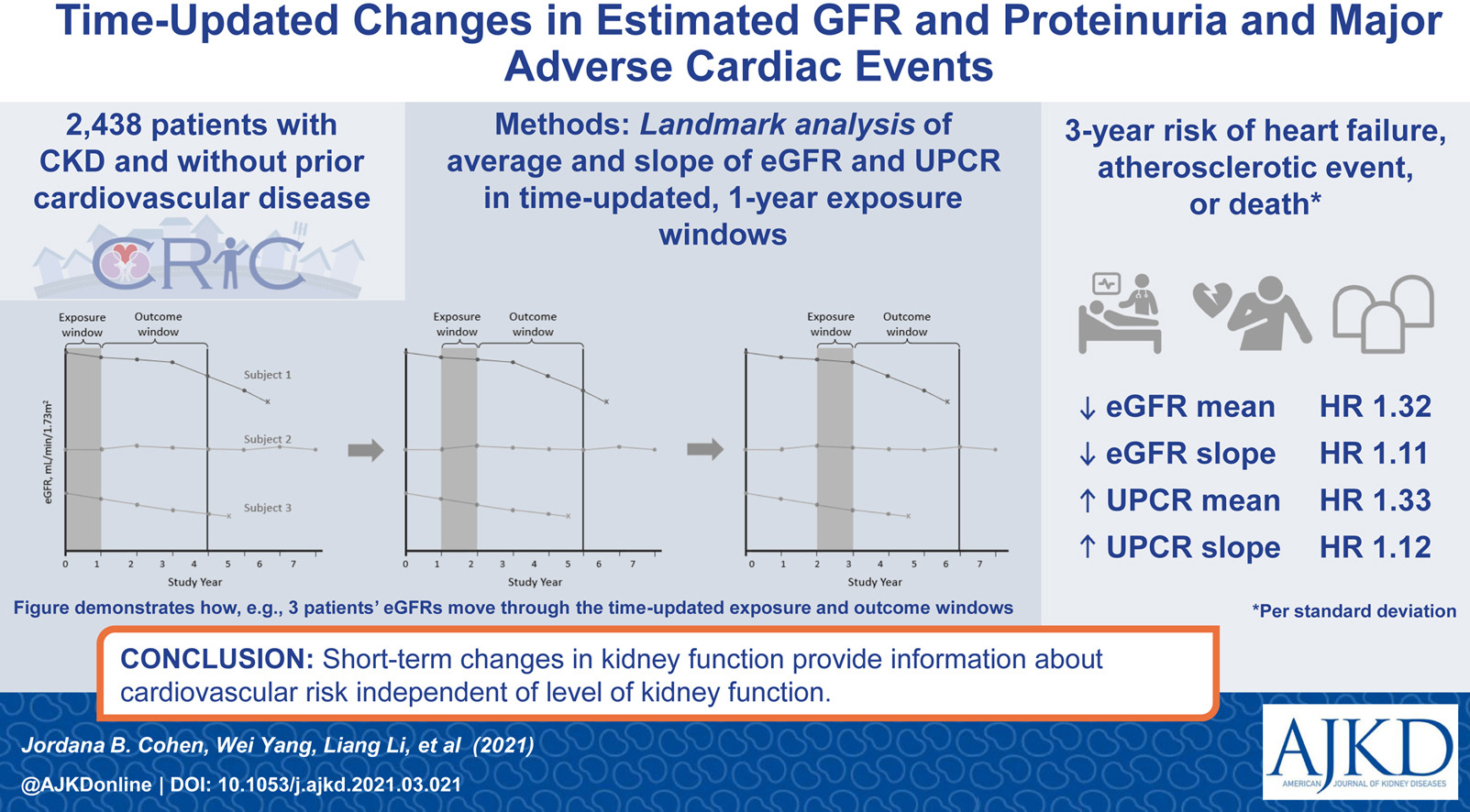 From the authors: In peritoneal dialysis (PD) patients, different characteristics and treatment practices can impact the likelihood of cure after a peritonitis episode. This large observational study describes the variation in PD-related peritonitis outcomes across a group of countries, including the United States, Australia, New Zealand, Canada, Japan, Thailand, and the United Kingdom. We observed low overall peritonitis cure rates (ranging from 54% to 68%) in all participating countries. The use of automated PD versus continuous ambulatory PD, greater facility use of icodextrin solutions, and empirical use of aminoglycosides compared with ceftazidime for Gram-negative peritonitis were associated with a higher odds of peritonitis cure. These ﬁndings may inform future studies aimed at reducing the morbidity from PD peritonitis. 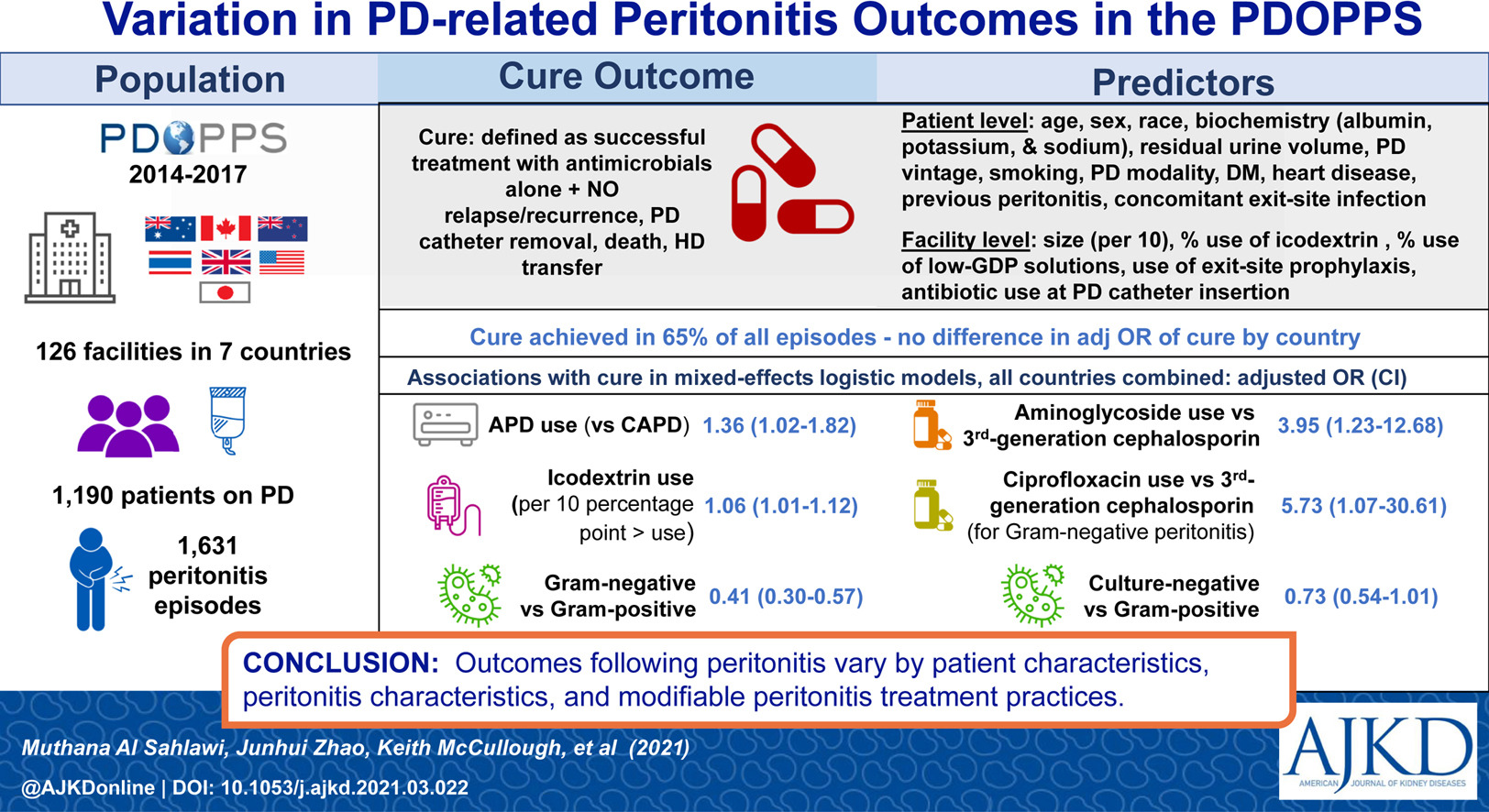 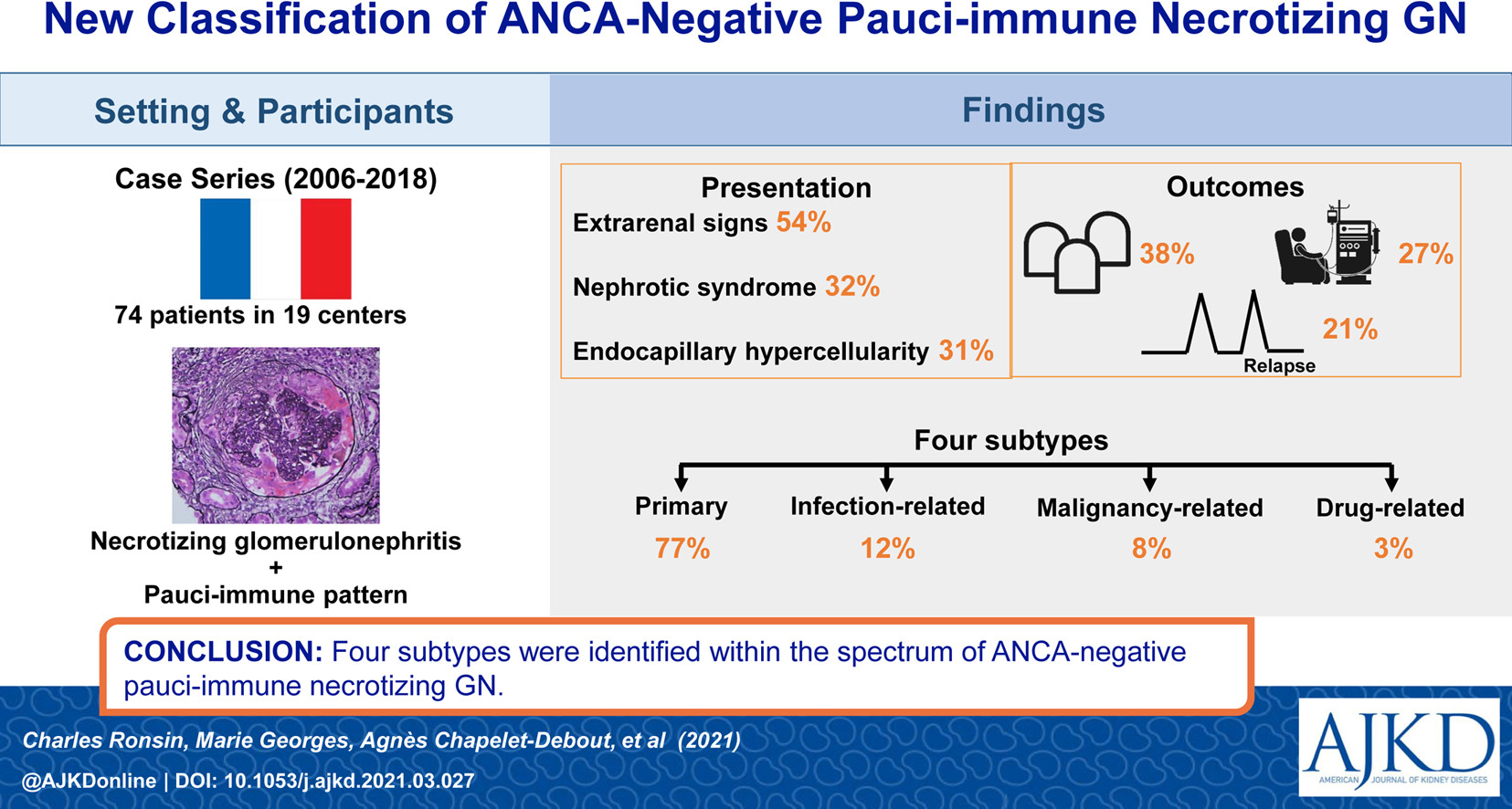 From the authors: There is inadequate evidence in regard to the ﬁrst permanent vascular access type and risk of mortality or hospitalization among the elderly population under-going hemodialysis. We emulated a randomized controlled trial using observational data to compare the effect of AVF versus AVG creation on the risks of mortality, hospitalization, and sepsis. We found no differences between AVGs and AVFs with respect to mortality, sepsis, or all-cause, cardiovascular-related, and infection-related hospitalization after accounting for potential bias and confounding factors. This study supports equipoise between creation of AVFs versus AVGs among elderly patients who initiate hemodialysis with a catheter.

From the authors: The EvoCit study is a clinical trial that compared he-modialysis with and without systemic anticoagulation with respect to dialysis adequacy and coagulation activation. This randomized, crossover, noninferiority study showed that the combined use of a heparin-grafted dialyzer with a citrate-enriched dialysate offers solute removal that is less than 10% lower than is achieved with hemodialysis using heparin for systemic anticoagulation. The avoidance of systemic anti-coagulation resulted in shortened treatment times in 13 of 307 EvoCit sessions, higher thrombin generation, and more frequent loss of blood compartment volume of the dialyzers. Future research is needed to explore clinical outcomes of heparin-free hemodialysis beyond these ﬁndings that focused on solute removal from blood. 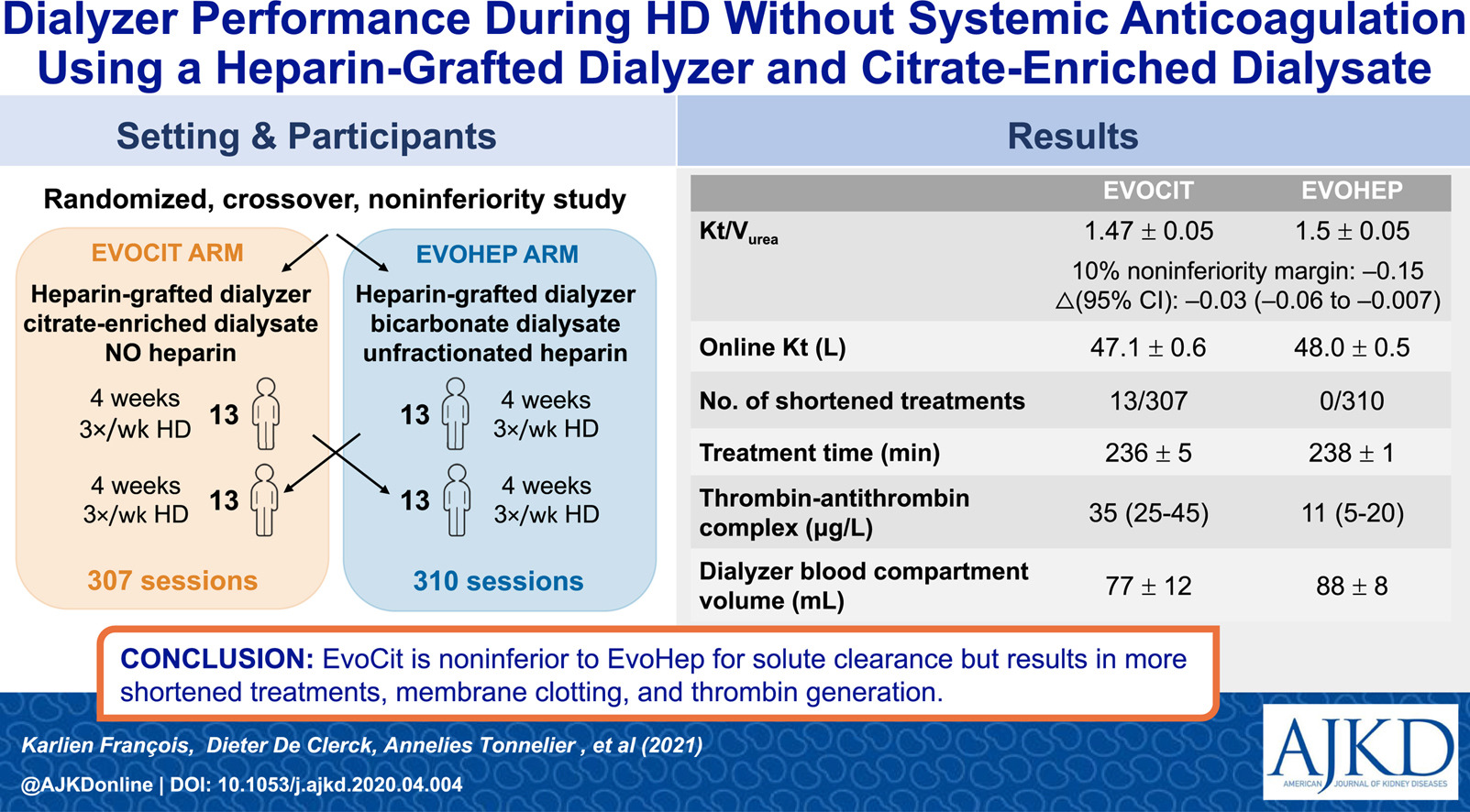 Perspective from the January 2022 Issue:

Patient activation, the measure of patients’ readiness and willingness to manage their own health care, is low among people receiving in-center hemodialysis, which is exacerbated because such centers are commonly set up for patients to passively receive care. In our pursuit of person-centered care and value-based medicine, enabling patients to take a more active role in their care can lead to healthy behaviors, with subsequent reductions in individual burden and costs to the health care system. To improve patient activation, we need to embrace a patient-first approach and combine it with ways to equip patients to thrive with self-management. This requires changes in the training of the health care team as well as changes in care delivery models, promoting interventions such as health coaching and peer mentoring, while leveraging technology to enable self-access to records, self-monitoring, and communication with providers. We also need health care policies that encourage a focus on patient-identified goals, including more attention to patient-reported outcomes. In this article, we review the current status of patient activation in dialysis patients, outline some of the available interventions, and propose steps to change the dynamics of the current system to move toward a more active role for patients in their care. 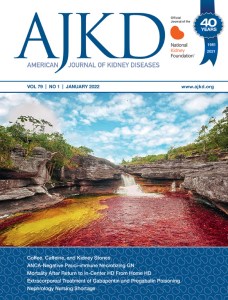 On the Cover: For much of the year, Cano Cristales in Colombia, known as “the river that runs away from paradise,” consists of a bed of rocks covered in dull green mosses. After the annual rainy season, the Macarenia plant grows in the riverbed and produces carotenoid pigments to protect against oxidation and UVA rays. The associated bright red color mixes with colors of algae and mineral deposits to create a magical spectacle of a living rainbow. Elsewhere in Colombia the mountains are thick with another antioxidant-producing plant that captivates the senses, the indispensable Coffea arabica. In this issue, Yuan & Larsson perform a Mendelian randomization study to show that higher coffee consumption may reduce kidney stones, and in an accompanying editorial Ferraro & Curhan discuss how this genetic technique can derive causal estimates without requiring an expensive trial.

The photo “CANO CRISTALES e LOS OCHOS 01”, by Mario Carvajal, is released under the CC BY 3.0 license and is available via Wikimedia Commons.

AJKD is celebrating its 40th year in 2021. In this special collection, the editors highlight landmark papers on kidney transplantation that have been published in the journal over the past four decades. All articles in the collection are freely available until Feb 3, 2022. 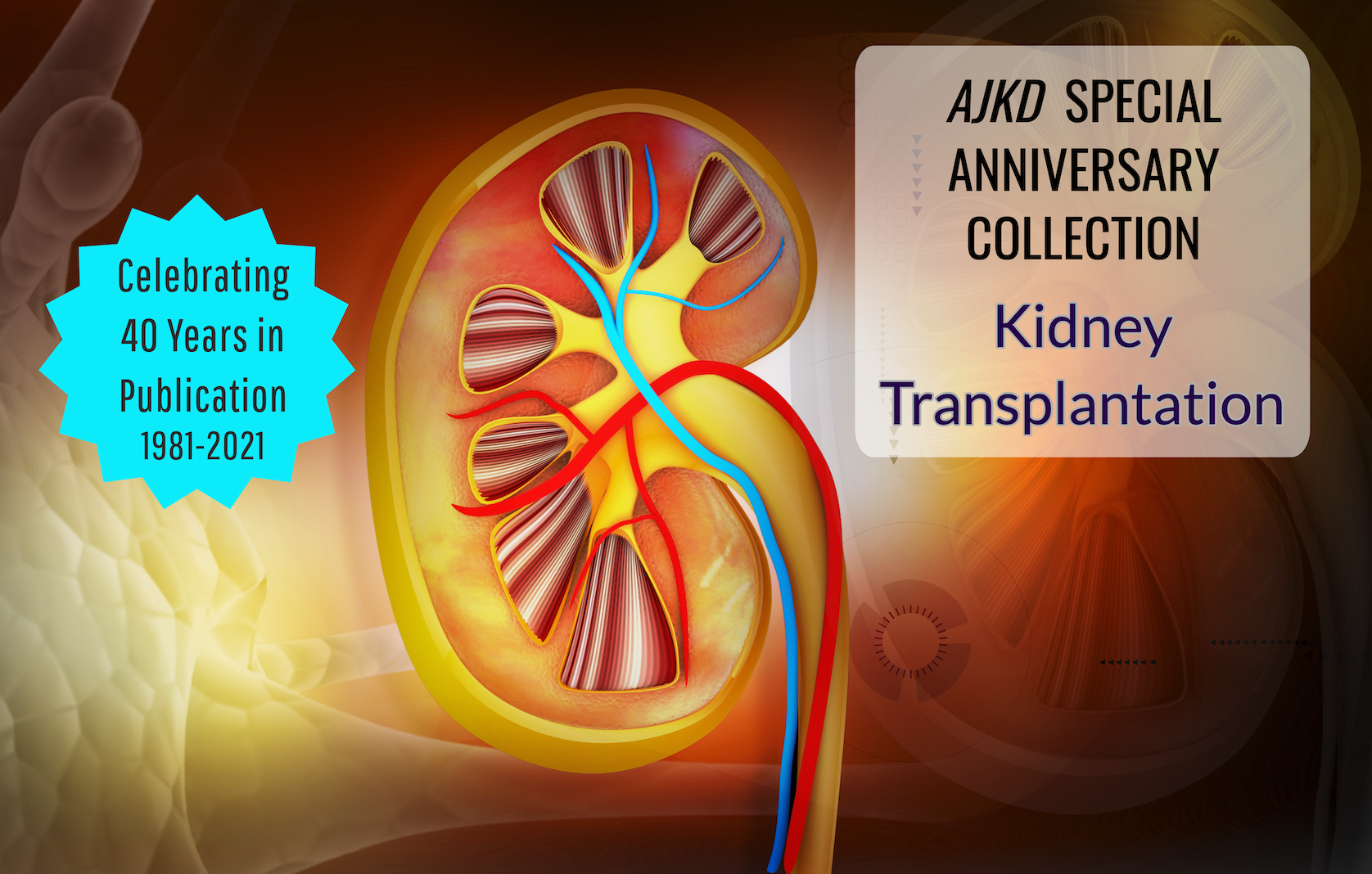