Dr. Raphael Rosen was an AJKD Editorial Intern from 2021-2022. A recent graduate of nephrology fellowship at Columbia University, he is a nephrologist in Stamford, Connecticut. He is passionate about medical education, point of care ultrasound and patient care.

Over the last two decades, the use of high sensitivity troponin (hsTnT) and N-terminal pro-brain natriuretic peptide (NT-proBNP) has transformed the diagnoses and management of acute coronary syndrome and congestive heart failure (CHF). The fly in the ointment of these biomarkers has been how to interpret elevated levels in patients with chronic kidney disease (CKD). This ambiguity stems from the fact that the kidneys play a role in the clearance of these proteins. Impaired renal function limits excretion and is therefore at least partially responsible for elevated serum levels of these biomarkers, without this necessarily being suggestive of increased production from myocardial damage.

However, despite the modest elevation due to decreased clearance, it has been repeatedly shown that these biomarkers remain powerful predictive tools of cardiac morbidity in patients with CKD. For example, investigators analyzed patients in the Chronic Renal Insufficiency Cohort (CRIC) and demonstrated that even when adjusting for glomerular filtration rate (GFR) and other covariates, patients with higher quintiles of NT-BNP and hsTnT have increasing risk of incident heart failure.

In a recent study published in AJKD, Bansal et al seek to establish NT-proBNP and hsTnT reference limits that are specific for each CKD stage.

The authors analyzed the CRIC cohort, which consists of patients with stable CKD stages II, IIIa, IIIb and IV, recruited between 2003 and 2008. They excluded patients with overt (self-reported) cardiovascular disease, including congestive heart failure (CHF), stroke, myocardial infarction (MI), atrial fibrillation, or peripheral vascular disease, leaving them with a cohort of 2,312 patients. The investigators excluded patients with prevalent cardiac disease from their primary analysis, aiming to create a reference range of these biomarkers among  healthy CKD patients, much as the current hsTnT reference range in the general population derives from studies of healthy volunteers.

The authors found that mean hsTnT and NT-proBNP increased with increasing stages of CKD. Additionally, 40% and 43% respectively of the CKD population’s NT-proBNP and hsTnT fall above the general population upper reference limit (URL), demonstrating the inadequacy of using the current URLs in patients with CKD. In multivariable adjusted models, the 99th percentile values of NT-proBNP and hsTnT were 1.43 (95% CI, 1.21-1.69)-fold and 1.45 (95% CI, 1.31-1.60)-fold higher, respectively, per 15 mL/min/1.73 m2 lower value of baseline eGFR.

The investigators did two sensitivity analyses, one including patients with prevalent cardiovascular disease, and one excluding those patients with left ventricular hypertrophy or reduction in ejection fraction on echocardiography performed one year after entry into CRIC. The rationale behind this analysis was to try to establish reference values for CKD patients who lack even subclinical cardiovascular disease.

First, we have to ask, “Do we dare to disturb medicine’s placid uniformity by proposing more nuanced reference limits for hsTnT and NT-proBNP for CKD patients? Will this just lead to confusion?”

The answer is that nuanced reference limits are quite reasonable, and probably a step toward “personalized medicine”.  First, there are many laboratory values that have more nuanced reference ranges than currently exist for hsTnT and NT-proBNP (eg, supine vs seated vs standing values for aldosterone, cortisol levels that differ based on time of day, etc). Second, the FDA labeling already gives a different URL for patients aged 75 years or below. Third, a group of investigators have already proposed higher hsTnT values in the general population based on age and sex, up to 31 for men over 65.

A more difficult question to answer is, “What are the next steps based on this?” Should we immediately change the reference values in our laboratories or just leave the status quo?

The authors make a strong case that the current URLs are inadequate for CKD patients, whether they have clinical, subclinical, or undetectable cardiac disease. However, there are major dangers in considering higher values of  hsTnT or NT-proBNP “normal” in CKD. As mentioned, it is already established that each rising quintile of these values conveys added risk, not only the highest values. Further, the results of the study do not apply to patients in the acute care setting.

What would the implications be of trying to use higher URLs in the acute care setting, like in the emergency department? Current URLs overestimate CHF/MI in CKD patients who do not clinically have them and could lead to ignoring other issues (eg, COPD for dyspnea, pericarditis for chest pain, etc). Nevertheless, we know that CKD patients are at increased risk for adverse cardiac events so we don’t want to be falsely reassured that results are “normal” in CKD.

The danger of increasing the URL for troponin by even a small amount is illustrated in this study. Patients with CKD presenting to the emergency department with possible acute coronary syndrome were stratified by admission hsTnT level. Unsurprisingly, patients with troponin elevation had worse outcomes than those without. However, what is notable is that even those with a very modest troponin elevation had high levels of adverse cardiac events at 30 days compared to those with normal troponin levels.

If we increase the URL for troponin in CKD even by a small amount, we will inevitably miss some of these patients who are destined for bad short term outcomes, even with a troponin 1-5x normal. Will this contribute further to renalism and compound the existing undertreatment of ACS in CKD with underdiagnosis as well?

In conclusion, Bansal et al shine a light on the inadequacy of the current URLs for hsTnT and NT-proBNP in CKD and propose new URLs for each CKD stage. However, caution must be maintained that even rising levels (even those that remain below the 95th or 99th percentile for CKD) still confer risk.  Being a sensitive rule out for “can’t miss” diagnoses like CHF and myocardial infarction are these test’s raisons d’etre. Further validation of the use of these proposed URLs in the acute setting is required. 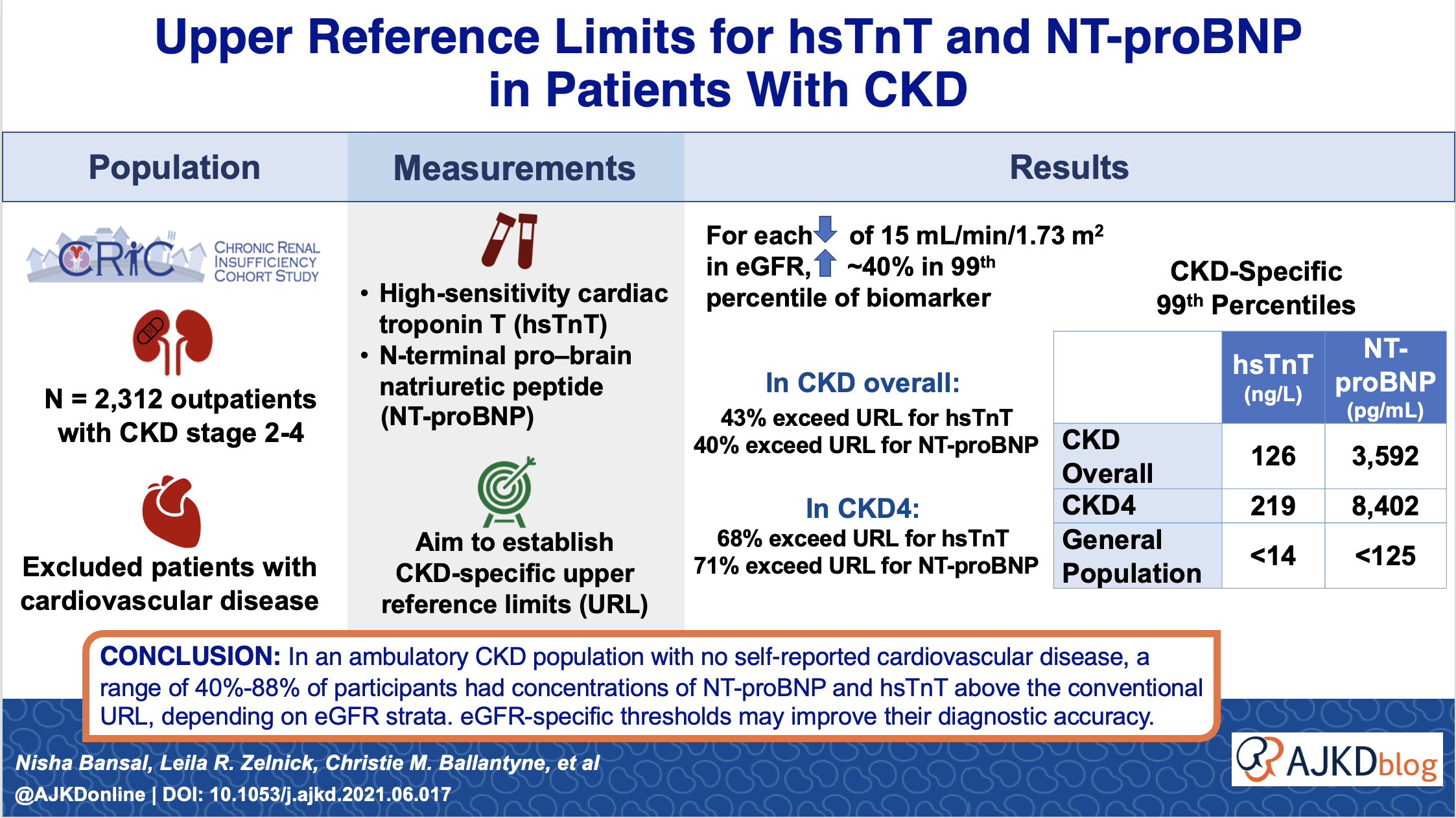