In late February NephMadness began as an idea to do a nephrology take on the NCAA basketball tournament. We wanted to do an educational initiative that really engaged the larger community of nephrologists that are online. Chaining a series of posts together in a month-long educational campaign was a new concept to eAJKD, which had carved a niche in author interviews, meeting coverage, and self-tests, but also to the wider nephrology blogging community. Nephrology bloggers had been making contributions across the web for half a decade but a true social media campaign focusing on user engagement had never been attempted. So Challenge accepted.

Kudos to the AJKD editors, who wouldn’t know a hashtag from a hat tip, for taking a chance and trusting us.

The Advisory Board and eAJKD Contributors spent the first 3-4 days brainstorming the nephrology achievements that would vie as teams. Over 120 ideas were floated within a week we had the topics and brackets mapped out. In the two weeks leading up to Selection Sunday, in addition writing summaries introducing the teams, we started to think about how we were going to engage our audience — our biggest fear was launching the project and getting a collective meh from the internet. The social media plan ultimately wasn’t any more sophisticated than blast NephMadness across all of the Twitter, Facebook and blogging channels we had access to.

Matt Sparks came up with two of the important triggers to the success: He came up with the name (Joel wanted to come up with the name so badly and spent fruitless hours trying to dislodge NephMadness) and the logo. Both of these were essential elements to branding the whole experience in order to make it feel like an organized campaign, rather than a disjointed collection of blog posts. We registered the #NephMadness hashtag with Symplur. These guys provide an incredible service to the healthcare social media landscape. Great to have allies like this.

In the week leading up to Selection Sunday, Sparks, Jhaveri and Topf started a whisper campaign leaking the hashtag, logo and concept to key members of the nephrology social media landscape. On Selection Sunday after a hectic week of late nights, rewrites and self-doubt we dropped 9 posts containing 12,247 words, almost 50 pages of text.

We tried to light up the social media switchboards as best we could, but Sunday is not exactly a hotbed of medical social media activity. As the week moved on though we could see people were getting engaged. Beyond tweeting, we blogged about it and others who enjoyed the experience added additional posts.

Thirty-three blog posts for or about NephMadness in 24 days. But what was so powerful was not just the volume of posts, but the fact they came from various sources in order to hit a broader audience than if a similar number of posts had come from a single blog.

We also had steady twitter chatter that started feverish and died down over the first couple of weeks. Unlike the real tournament, which gets more exciting as the tournament advances, NephMadness is a novelty item that doesn’t have real life drama to carry it for a month. Like a SNL joke, it went about 25% longer than ideal, but to some extent we are slaves to the tempo of the NCAA tournament.

The conversation about NephMadness extended beyond the usual suspects in the Nephrology Twitter-verse. UpToDate, Doctor Natasha, MGKatz036 and DrMikeSevilla, precordialthump and iMedical Apps were some of the participants that I was delighted to see participate. But my two favorite twitter moments were when Graham Abra, of the Renal Fellow Network, began ripping other people’s brackets (here and here for examples). He took one of the cherished traditions of the NCAA tournament and applied it to NephMadness perfectly, #TrashTalking. The other was when Vicki Ivancevic, a dialysis patient in Illinois, began participating in NephMadness. When we started I envisioned this being a fun diversion for nephrologists and a learning opportunity for students, residents and fellows, but there are no walls on the internet and you never know who you will touch. Her story is here. 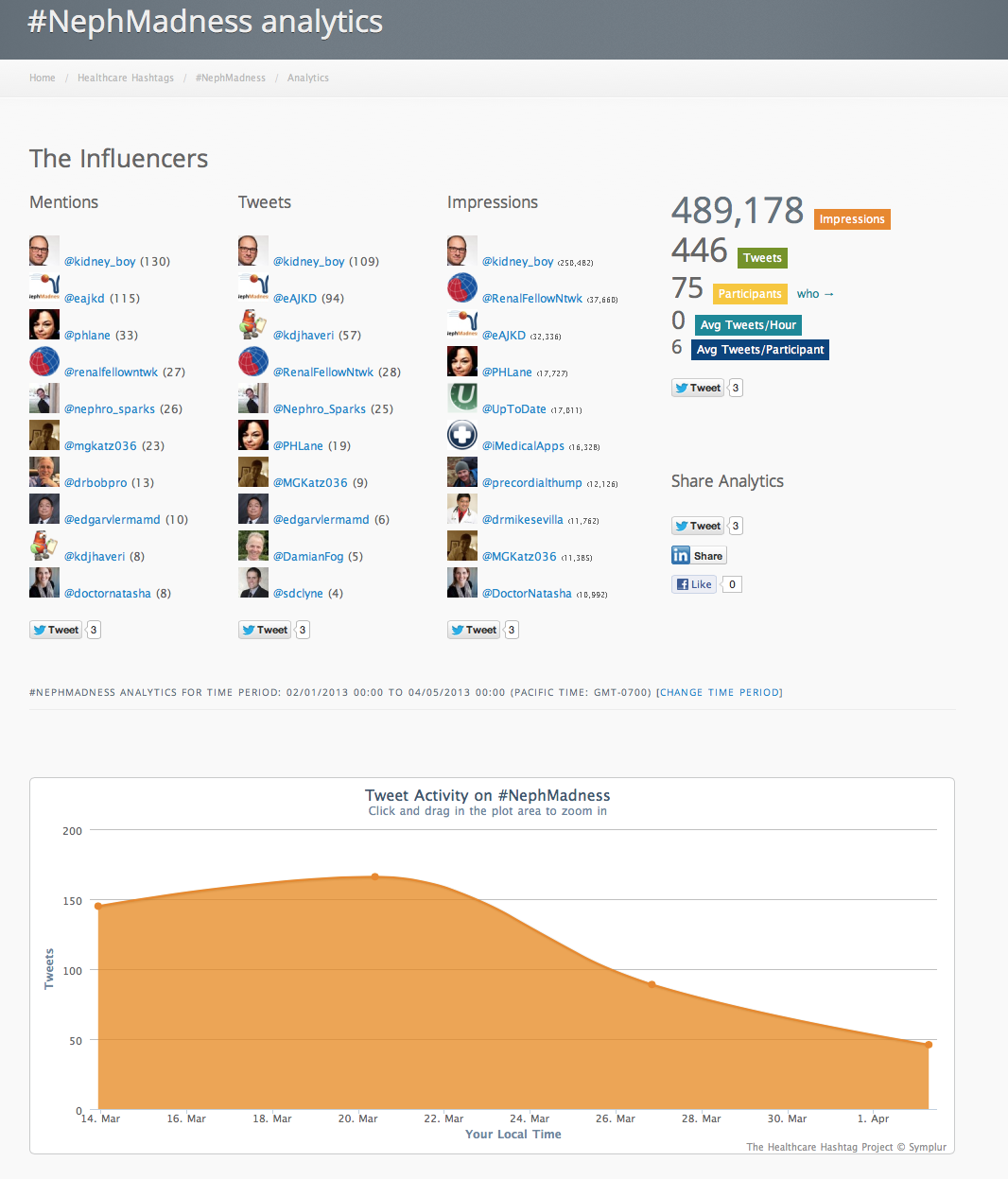 What of the future:

We are releasing an off line edition, NephMadness Unplugged (PDF: NephMadness Unplugged | Pages File: NephMadness Unplugged). This PDF can be printed, e-mailed around or distributed to iPads. The idea is to use NephMadness as a foil to spur nephrology education and interest. I’m having the residents and fellows that round with me fill out brackets and defend their choices. It forces them to read, and provides ready topics about a lot of things that you may not encounter on wards. It is a casual renal curricula for oral discussion. The students and residents that have used it have loved it.

This summary of our experience producing NephMadness is not intended to be self-promotional, but is our way of thanking everyone who participated. From the very origin of the project we intended this to a community building experience. We wanted it to be interactive and without the readers, the bracket pickers, the trash talkers and the tweeters, there would have been no Madness.

for the entire eAJKD team