Of the many interesting sessions at the 47th annual CSN annual general meeting in Montreal, an interesting session on Friday April 24th was on the interface of primary care and nephrology. The first half of the session was on developing resources to help primary care providers (PCPs) take care of patients with chronic kidney disease (CKD) and the second part related to cancer screening in patients with CKD.
Allan Grill, a PCP working in the Toronto area, started off by explaining how, despite the plethora of guidelines for management of CKD (he quoted KDIGO, CSN commentary in AJKD, ACP), none of them target PCPs, and additionally, none of them are published in journals usually read by PCPs. He works with as the provincial lead for primary care with the Ontario Renal Network, and after consultation with other PCPs and nephrologists, they decided to come up with a simple and easy to use ‘toolkit’, rather than re-invent the wheel with another set of guidelines or recommendations. One of the principles of this toolkit is that it will be easy to use, and be integrated with many electronic medical records (EMRs). Called the ‘KidneyWise’ toolkit, it will be released next month, with multi-platform apps that will also be available. Next up was Kerry McBrien from Alberta, where they have a well developed algorithm for CKD management and referrals for the last few years (see figure). Speaking of EMRs, the next speaker was Karen Tu, a researcher with ICES, in Toronto. Her team is conducting the EMRALD-CKD study, which links the majority of EMRs in the province with the ICES database, which already has outcomes from many laboratories and hospitalization. Over time, this will allow evaluation of CKD outcomes at a population level with granular data viable from these EMRs. 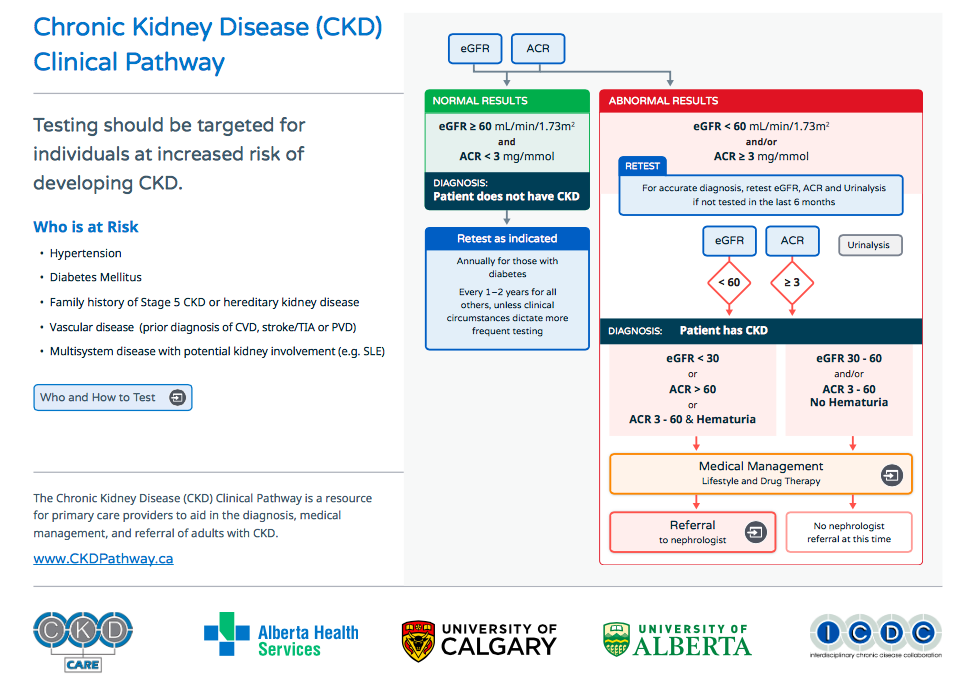 The second half of the session was on cancer screening in CKD and end stage renal disease (ESRD) patients, by Deborah Zimmerman from Ottawa. Cancer screening in the general population is always a controversial topic, but in this case, it was more an eye-opening one for many in the audience. Firstly, she pointed out that a major issue with cancer incidence in CKD is that detection of kidney disease itself and the diagnostic approach and management that follows, often results in a ‘detection bias’ of increased diagnosis of pre-existing cancer, especially renal cell carcinoma. Another important factor to guide your decision making process for screening is the expected life expectancy of the patient starting dialysis (which remains less than that of most patients with cancer, except lung and pancreatic cancer). There is indeed a higher risk of certain cancers, especially renal cell and urothelial cancers. There is also an increase in thyroid cancer – which perhaps might again be partly biased due to greater screening from secondary hyperparathyroidism. Though the prevalence of breast (and prostate) cancer does not seem to be high than the background in the general population, the greater calcifications make diagnosis based on mammograms much more difficult. Similarly, fecal occult blood (which incidentally does not have a great positive predictive value in the first place) results in much more false positive results in ESRD patients, and is thus not very useful. The last word was on the basis of a Markov model of screening, which showed that the gain in life expectancy with screening was ~ 0.02% (or 5 days) and was pithily summarized by Joel Topf in this tweet. 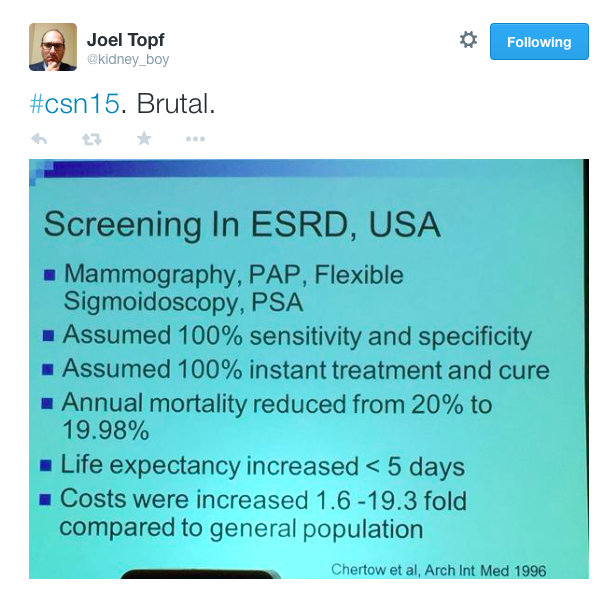