Normalization of hemoglobin has been a dominant force in this NephMadness and is poised for greatness in the Filtered Four. One of the key players in the story is Daniel Coyne. We are grateful to have him tell his incredible story as part of #NephMadness: 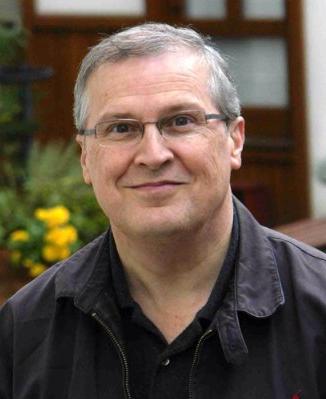 Dr. Daniel W. Coyne M.D. is a Professor of Medicine in the Division of Nephrology at Washington University in St. Louis. He is the Medical Director of the Chromalloy American Kidney Center, one of the first dialysis centers in the US, and the Director of the Medical Multispecialty Clinics at Washington University. He has participated in trials of ESAs and IV iron products in patients with CKD or on dialysis since 1998, and was the lead investigator of the DRIVE trial examining the benefit of IV iron in hemodialysis patients with elevated Ferritin.

Mine is a story of an anemia investigator who went from true believer in the benefits of aggressive ESA use to skeptic attacking the 2006 anemia guidelines (GL) as minimizing the dangers of ESAs while exaggerating benefits despite limited evidence. Later, we would learn the benefits were more than limited – some were misrepresentations.

The period of 1998 to 2006 was a time of increasingly aggressive promotion of higher hemoglobin as a seemingly certain means to reduce cardiovascular events and deaths and improve quality of life (QoL) in dialysis patients. By 2005, expenditures for ESAs in dialysis exceeded $2 billion, and most came from Medicare. This was despite the 1998 publication of the results of the early terminated 1,233 hemodialysis patient Normal Hematocrit Trial (NHT) showing a trend of increased deaths (~30% higher risk) when targeting normalization of hematocrit. The NHT results were dismissed as:

Speakers paid by the ESA makers, myself included, gave talks encouraging more anemia treatment and promoted the guideline target of 11-12 g/dL over the FDA target of 10-12 g/dL. These lectures were heavy on the association of higher hemoglobin with better outcomes. The inconvenient NHT results were usually never mentioned. If a questioner brought up NHT, the results were usually dismissed as only a trend, and the benefits of reducing transfusions and raising quality of life was emphasized. Indeed, NHT had reported in 1998 that targeting normal hematocrit had significantly and dramatically raised the “physical function” score of QoL. From 1999 to 2003 I bought and sold this hook, line, and sinker.

In 2004, Yi Zhang and colleagues published a study showing higher epoetin dose was related to higher risk of death. 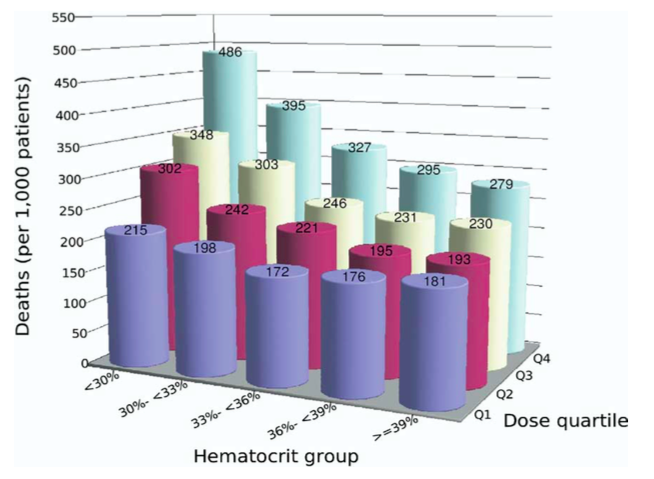 ESA makers and their experts dismissed this as confounding: sicker patients receive more epoetin. But if confounding explained Zhang et al’s data, couldn’t it also explain away the benefit of higher hemoglobin? Healthier patients respond to epoetin better and are less likely to die. Most dialysis patients get sicker – and more anemic despite higher epoetin doses – in the months prior to dying. This led me to ask, where are the data showing higher hemoglobin is really causing reduced mortality?

I found USRDS data showing no reduction in dialysis deaths despite marked increases in mean hemoglobin. I reexamined the NHT results. I did a statistical test on the ratio of events (164/615 vs 202/618) in the two NHT arms, and was shocked to get a p value of 0.02. The original paper never mentioned the p value (curiously), and the 95% confidence intervals of 0.9 to 1.9 that were reported in the abstract and results were described in the methods as adjusted, but didn’t provide the unadjusted results or say how much they were adjusted. In 2007, we learned they were actually the 99.912th percentiles that yielded the 0.9 to 1.9 risk spread. The unadjusted risk was 1.28 (95% CI of 1.06 to 1.56; p=0.01). As NHT was an open label study and the maker of Epoetin was directly managing the trial, they knew the unadjusted results when they stopped it.

By 2005, I decided the evidence showed aggressive anemia treatment with ESAs actually:

I felt more confident in late 2005, when word leaked that the CHOIR study had been stopped and the high hemoglobin target arm had more CV events and deaths. In 2005, I gave my first public lectures saying ESAs were not only not saving lives, they were actually increasing CV events and deaths, and the risk was related to the dose of ESA administered.

By 2005, mean hemoglobin in dialysis was 12 g/dL, and DaVita reported 25% of its income was from Epoetin. Draft guidelines were circulated calling for raising the hemoglobin target to 11-13 g/dL, and claimed every CKD patient should have hemoglobin of 11 g/dL or higher. This “evidence-based” guidance would increase both the ESA doses and the proportion of non-dialysis CKD patients receiving ESA. My complaint about the guidelines prior to publication was the decision to lower the Ferritin limit from 800 to 500 ng/mL. As lead investigator for the ongoing DRIVE trial, I knew this would suppress iron use while increasing ESA dose further in dialysis patients. So I complained bitterly about that guidelines prior to finalization.

In April 2006, official anemia guidelines raising the hemoglobin target were announced at the NKF Spring Clinical Meetings, one day before the CHOIR top-line results were presented at the same meeting showing significantly more CV events and deaths when targeting hemoglobin to 13.5 g/dL. Beyond bad optics, it was in my opinion, an outrageous failure to balance risks and benefits. I believed the ferritin limit of 500 ng/mL was a nuisance most people would ignore (and I was proven correct), but the higher hemoglobin target was potentially lethal for patients.

The 2006 guidelines group admitted increased CV events and deaths when targeting higher hemoglobin (>13g/dL versus <11g/dL). However, they felt the evidence also showed higher hemoglobin improved QoL. They justified the treating all CKD patients to greater than 11 g/dL by saying “…QOL (quality of life) is a sufficient and, apparently, the sole determinant of treatment benefit.” Notably, the evidence tables showed among the five moderate or high quality trials available, the two targeting hemoglobin >11 g/dL but below 13 g/dL showed no increase in QoL, while the three reporting an increase in QoL all targeted more than 13 g/dL and the two largest showed increased deaths (NHT) and strokes (Parfrey’s 2005 trial). 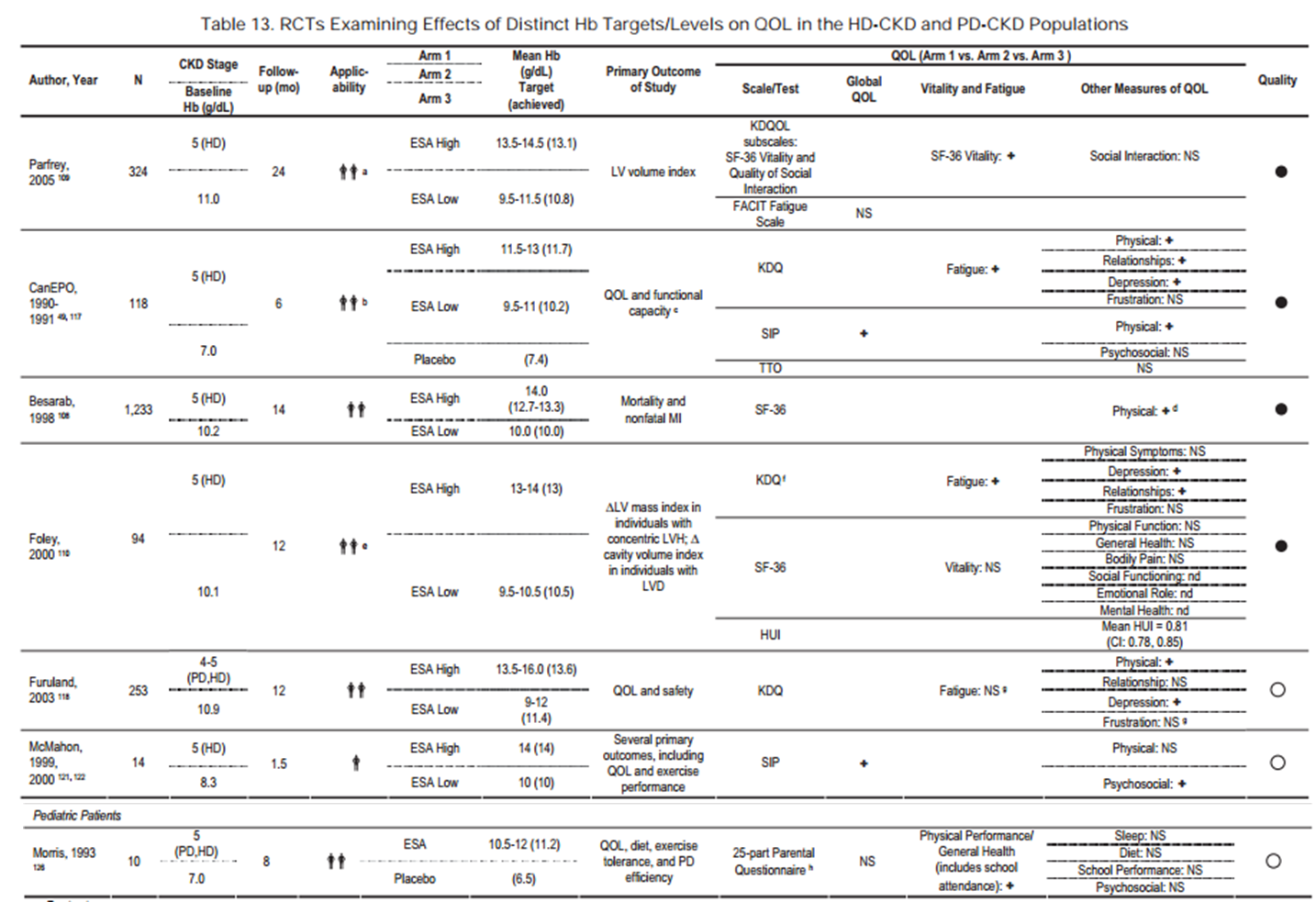 With release of the 2006 guidelines (PDF), I was asked to write a commentary for CJASN on problems with guidelines. It focused on the hemoglobin target guideline, and did not pull punches. I related the many conflicts of interest including funding by Amgen, DaVita’s dependence on income from ESAs, two DaVita executives on the workgroup, and an overwhelming majority of workgroup members having financial conflicts. I attacked the weak data supporting increasing the hemoglobin target and emphasized the evidence of harm, including that the workgroup chair had received a letter from the CHOIR lead investigator urging them to wait. The commentary was accepted, an online preprint was released for a day, then withdrawn and reportedly almost killed, then accepted with revisions despite the prior final acceptance. In the summer of 2006, long before publication in 2007, versions of my commentary circulated. Others recognized the contradiction of the anemia guidelines advice with the CHOIR results. When CHOIR was published in November 2006, journalists and medical commentators were ready to highlight the contradictions and financial conflicts. The press cast ESA makers, guideline organizations, dialysis chains, and nephrology groups in a bad light, and many blamed me. Honestly, I have always thought it was the most I have ever done to protect the welfare of patients. Whenever I was personally attacked, I would smile and say that’s because they can’t attack the evidence.

In late 2006, the NKF announced the hemoglobin target guideline would be revisited in light of the CHOIR results. The FDA meanwhile released further guidance on ESA use in CKD contradicting the KDOQI advice and strongly recommending to not exceed a hemoglobin of 12 g/dL. I followed with a commentary in JAMA on the role of for-profit dialysis chains in overusing epoetin. I said we need to fight against corporations using patients as profit centers based on bad science. A revised hemoglobin target guideline retreated to the 11-12 g/dL goal and was published in September 2007, but by then the Sturm und Drang was over, and so was blind faith in guideline recommendations. In my lifetime, I doubt guidelines will have the power they did prior to 2006. I count that as one of my accomplishments.

As a postscript, in 2011 bundling of dialysis services eliminated the profit motive for prescribing ESAs. The FDA also changed the label to state there was no known safe dose of ESAs and therefore prescribe the lowest dose necessary to avoid transfusions. They also said ESA do not improve QoL. I kept digging into the misleading 1998 NHT trial results. In 2012, after obtaining Amgen’s clinical trial report from the FDA through a freedom of information act request, I published the unadjusted results from NHT. Contrary to the 1998 publication, there was no improvement in QoL physical function scores when targeting higher hemoglobin. There were several other misleading aspects to the 1998 publication, and readers are strongly encouraged to read the KI paper. Some of the NHT authors blamed the editor for editing that fact out and leaving in the misleading claim of QoL benefit (you can read their full response in a letter in the same KI journal), though of course, they could have just published a second paper. I blame Amgen for false representations, and filed a qui tam suit against them later in 2012.

1 Comment on NephMadness 2016: Dr. Coyne tells his role in the Normalization of Hemoglobin story