Dr. Jeffrey Berns, President of the NKF, addressed that SCM attendees between the Shaul Massry lecture and the Keynote. His talk was on patient preferences and incorporating that into the care we provide. 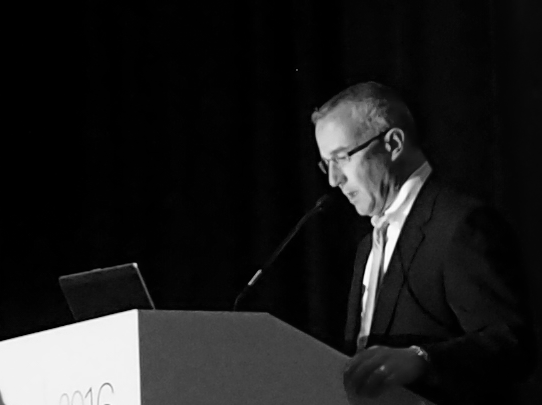 Dr. Berns started his talk by showing the GFR at which patients initiate renal replacement therapy. In 1996, 20% of patients started dialysis with a GFR over 10 mL/min; in 2011, that statistic was up to 50%. Those dates mostly precede the 2010 IDEAL trial, which was the RCT that most convincingly turned us away from GFR-based initiation of dialysis. In more recent years, that percentage has begun to return to earth.

Dr. Berns then turned to often repeated data: although in-center hemodialysis is the dominant form of renal replacement therapy, 75% of physicians would choose peritoneal dialysis or home HD for themselves. He even took a shot at the 6% of doctors that said they would do in-center HD.

Once again, the "what modality would nephrologists choose" slide is up.

Dr. Berns then presented some data I had not previously seen: that having a functional access precipitated earlier starts on dialysis, and incidental hospitalizations often triggered the initiation of dialysis in patients with advanced CKD due to “bad labs” or imminent operations.

He showed data that when patients were asked why dialysis was chosen over conservative care, 52% said it was because their doctor wanted them to. Further, 61% of dialysis patients subsequently regretted their decision to start dialysis. (If you’d like to learn more about this data, it looks like it came from  a 2010 CJASN article.)

Dr. Berns used all of this data to bolster his point that there is a significant gap between what our patients want and what we are giving them.

When asked to rank various symptoms and outcomes that drew their concern, dialysis patients placed fatigue, ability to travel, and impact on family at the top of the list; mortality was at the very bottom, behind 13 other concerns. He didn’t need to ask where physicians would rank mortality.

He then outlined some barriers to conservative care and briefly discussed the data recently published by Verberne et al, which no survival advantage for dialysis over conservative care in patients older than 80 years. (This was discussed at the March 23th #HPM chat.)

In summary, Dr. Berns said that we need to honor our patients’ preferences in regards to dialysis treatment choices, but they can only make those choices when they have been fully informed of the complications, difficulties, and prognosis of dialysis. I think this is something we can all get behind and was worthy of a presidential address.

Dr. Berns had one more thing to mention at the very tail end of his talk…

Yup, you guessed it – he pointed out that conservtive care won NephMadness. Here are the pics to prove that it really happened:

Unbelievably humbled that Jeff Berns gave a shout out to #NephMadness in his plenary #SCM16 pic.twitter.com/XmhcGn18Tq